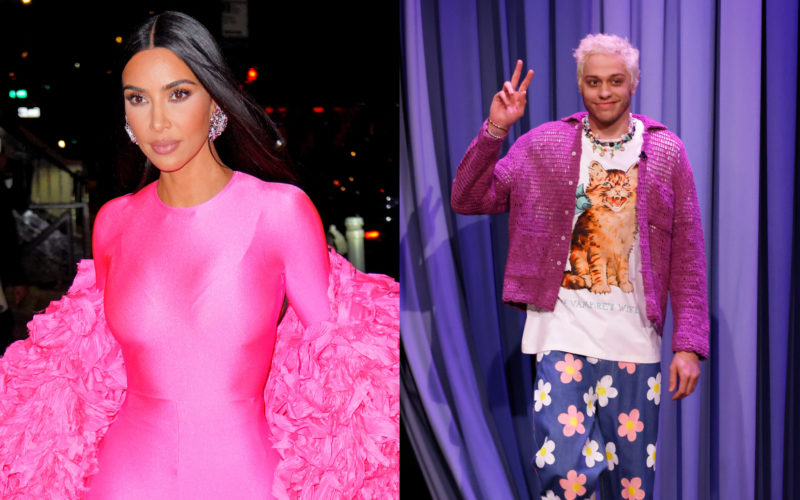 Do your thing, Kimberly.

Just as the internet settles from the news of Kourtney Kardashian and Travis Barker’s engagement, furor has ensued yet again with rumours that Kim Kardashian is dating comedian Pete Davidson. Could this be real? Here’s what we know.

On October 29, the pair was photographed holding hands on a roller coaster ride at Knott’s Scary Farm, a Halloween event in Buena Park, California. They were accompanied by the aforementioned Kourtney Kardashian and Barker on the spooky outing (Davidson and Barker reportedly know each other through their mutual friend Machine Gun Kelly, who is dating Megan Fox. Still with me?).

Kravis has had many a viral double date with MGK and Fox, and both celeb couples rarely hesitate to share PDA pics and objectively strange proclamations of love (like, the fact that MGK wears a vial of Fox’s blood around his neck). Being around these two love struck couples is sure to rub off on Kim Kardashian and Pete Davidson — I mean, how could it not?

A source later denied any romantic feelings between the pair, telling People, “They hang in the same circles so they will be together from time to time. It’s just friends hanging out.” Case closed? Not so fast, there’s more.

The rumours further intensified on November 1, when Kim Kardashian flew to New York City — Pete Davidson’s home base. According to Page Six, Kardashian went to the city to attend WSJ magazine’s annual Innovator Awards, and noted that Davidson is likely back in the city at the same time for work obligations. NYC is one of the most famous and highly-populated cities in the world, so it’s most likely her visit had nothing to do with Davidson, but we’ll opt to suspend disbelief on this one (it’s more fun!).

All of these rumours can be traced back to earlier in October, when Kim Kardashian hosted Saturday Night Live (SNL), of which Davidson is a returning comedian. In one of the show’s skits, Kardashian and Davidson paired up to perform a spoof of the Disney couple Jasmine and Aladdin, which ended with them sharing a kiss. This, of course, prompted many to think that the two could actually make a cute couple in real life.

And just like that, the potential coupling of Davidson and Kardashian has become a subject of widespread attention. Nobody can quite say why it works; it just does. Kardashian’s precision in curating all of her looks and photos is balanced quite perfectly by Davidson’s clumsy, awkward demeanour (in a good way!) and tongue-in-cheek sense of humour. It’s certainly a change from Kim K’s relationship with her former husband, Kanye West, who is known for taking himself quite seriously.

Pete Davidson first hit our radar when he became social media’s Internet Boyfriend du jour after getting engaged to Ariana Grande in the summer of 2018. Relatively new to worldwide consciousness, a collective fawning ensued over Davidson. The couple split in October 2018, but not before they were forever immortalized in meme format, thanks to a snap of Grande licking a lollipop while staring lovingly up at Davidson.

This year, both Kardashian and Davidson are newly single. In February, Kardashian filed for divorce from West after seven years of marriage. In August, Davidson and Bridgerton’s Phoebe Dynevor split after a few months of dating. And nothing brings two new singles together quite like a fear-inducing rollercoaster ride.

I think we can all admit that if we had the chance, we would happily date Pete Davidson. So to these rumours, we say, do your thing, Kimberly.