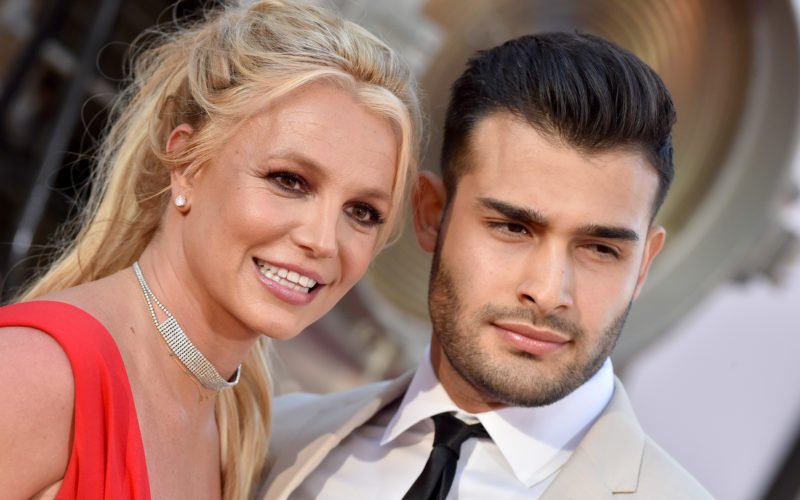 Photography by Getty Images for Axelle/Bauer-Griffin/FilmMagic

Everything you need to know about the ring’s design, and the engraved nickname.

How’s this for some happy news? Britney Spears is engaged — and has a gorgeous engagement ring to prove it.

This weekend, the pop icon revealed that her long-time boyfriend, actor and personal trainer Sam Asghari, popped the question. “I can’t f***ing believe it,” the 39-year-old wrote on Instagram, alongside a video of the couple showing off her ring in excitement.

The ring in question is a stunning four-carat round brilliant diamond in a platinum cathedral setting, according to reports, with the inside of the band engraved with the word “lioness” — Asghari’s nickname for Spears. The sparkler also has pavé detailing on the bridge and flush-set diamonds on the prongs and basket.

To design the custom ring, Asghari recruited Forever Diamonds NY founder Roman Malayev, E! News reports. “Every designer I spoke with about the ring was amazing with great ideas, but I just clicked with Roman,” he said in a statement. “We really connected on the design and he was as excited as I was to make it special — that’s why I chose him.”

“It’s incredibly traditional, but I’m impressed with how simple and modest it is,” says Mindham. “Even though it’s four carats, the design is extremely simple and meaningful to the two of them, which is really nice.”

As Mindham points out, he obviously doesn’t know Spears and Asghari personally, but in the expert’s opinion, it’s clear how much thought went into the design. There’s the fact that the round brilliant cut is more timeless that gives it a bit of distinction in the celeb world, and, of course, the personal message engraved into the band. But beyond that, there’s the size — four carats, Mindham says, is impressive without being over the top (ahem, depending on one’s means and personal style, naturally). The cathedral setting, meaning that the stone is raised and connected to the ring’s shank with arches, also leaves more room on Spears’ finger for her eventual wedding band. Then there’s the  “very pretty” bridge — a.k.a. the tiny section under the elevated portion — which is inset with additional tiny, brilliant-cut diamonds.

“There’s obviously some kind of message there — maybe it’s bridging the past and the future, or bridging their lives together,” says Mindham. “Usually, it’s something intimate that only the designer and [the couple] would understand.”

As noted, round brilliants are a traditional type of engagement ring that set a benchmark for other diamond values. According to Mindham, the round brilliants present the “most optically correct refraction of light,” making for a beautiful, unbeatable glimmer.

Back in the late 1800s and early 1900s, when diamonds became more popularized, round brilliants were the go-to. Demand for the cut amplified in the 1940s, when diamond engagement rings became standard thanks to some clever advertising from British company De Beers (hence the phrase “diamonds are forever”). It wasn’t until cutting equipment evolved and became more sophisticated that other shapes — like emerald and princess cuts, for instance — emerged.

Today, diamond ring trends are largely driven by celebrities, with Mindham pointing to the ubiquity of social media as a major source of inspiration for people looking to buy their own engagement rings. Right now, elongated oval-cuts (as seen on Hailey Bieber ), emerald cuts (like Jennifer Lopez’s ring from Alex Rodriguez), and cushion-cut diamonds (hello, Meghan Markle) are particularly popular.

“These things are culturally significant,” he says, noting that round cuts are often seen as old fashioned. “People pay a lot of attention to what celebrities are wearing, but also when everybody thinks of a round diamond, they [might] think of their mothers.”

Round brilliants are seen far less today, especially among celebrities. Mindham can only think of Queen Elizabeth II and the ring Olivia Wilde received from Jason Sudeikis when they were together as two notable examples.

Which again, is why it’s so perfect for the couple. “Britney’s ring is not a trend,” he says. “It’s a classic.”

We Have Questions About the New Squid Game Clothing Collab

Can You Mainfest Your Dreams On Social Media?