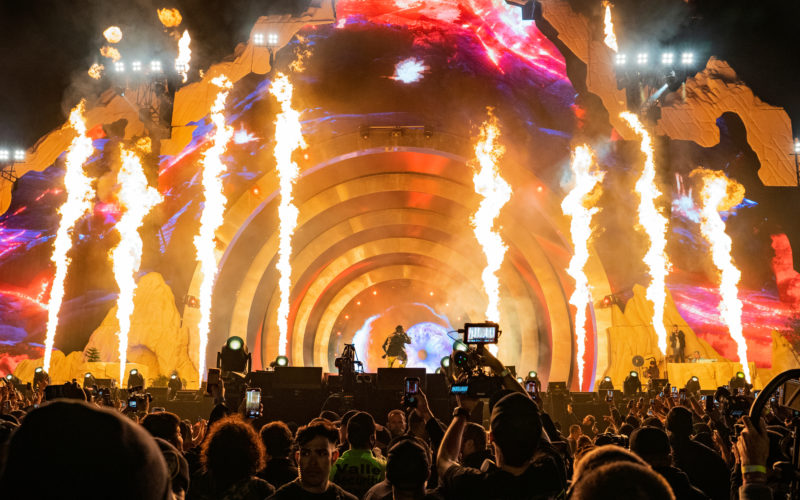 The apologies have fallen short.

Travis Scott and Drake are reportedly facing multiple lawsuits after eight people were killed and scores more injured in a crowd surge at Scott’s Astroworld Festival in Houston, Texas.

As we’ve all come to learn, the event descended into chaos on November 5 when the crowd pushed toward the stage during Scott’s set, the pressure leaving some attendees unable to breathe, witnesses say. “The crowd, for whatever reason, began to push and surge towards the front of the stage, which caused the people in the front to be compressed — they were unable to escape that situation,” Houston fire chief Sam Peña told CNN.

Those who died range from the ages of 27 to 14 years old. Of the roughly 50,000 people that attended the show, 25 were hospitalized, the youngest patient just 10 years old, as reported by Vulture. According to the Houston Chronicle, after police and firefighters declared a “mass casualty,” Scott continued to perform for 37 minutes.

Attendees say the concert was unsafe from the start, with videos showing hundreds of people bursting through the gates and bypassing checkpoints. Reporting from The New York Times and Los Angeles Times speculates whether the event had adequate security and medical personnel on hand. The Houston Police Department has launched an investigation into these claims to determine what led to the concert’s deadly turn of events.

On November 6, Scott and his girlfriend Kylie Jenner, who was in attendance, released respective statements about the events that took place.

Jenner faced backlash after allegedly posting a video of the concert to her Instagram story as an ambulance made its way through the crowd, but wrote in a later statement via her IG story that she and Scott “weren’t aware of any fatalities until the news came out after the show and in no world would have continued filming or performing.”

For his part, Scott posted a note to Twitter, writing that he is “absolutely devastated” and is working with the Houston community to support families in need. A statement sent wide by a representative of the rapper said Scott would cover the funeral costs of the Astroworld victims.

Drake, meanwhile, who appeared during Scott’s set, wrote on IG: “My heart is broken for the families and friends of those who lost their lives and for anyone who is suffering.”

Still, for many, these apologies all fall short. Videos from the concert see Scott allegedly aware of the chaos. In one video, he briefly stopped his performance to order help for someone in the crowd who had passed out. But moments later, he continued performing. “There’s a literal video of you singing while you’re literally looking at someone passed out, any decent artist would of stopped the show,” wrote one user on Twitter in response to Scott’s statement. “It’s not that hard to be a decent human being.”

In another video, the crowd can be heard yelling at Scott to “stop the show,” but the performance continued. A separate video shows two attendees who had climbed onto a platform where cameramen were shooting. They are seen yelling that someone in the crowd had died, and pleading with the cameramen to notify concert organizers. The woman in the video, Seanna Faith, later wrote on Instagram that there was “a floor of bodies” below her. She said the cameramen dismissed her, and one allegedly threatened to push her off the platform if she didn’t get down.

At one point, Scott can be heard saying, “If everybody good, put a middle finger up in the sky,” as an ambulance moves through the crowd. Two men approach Scott on stage, and he waves them away, turning back to the crowd and telling them to put “two hands to the sky,” adding, “I want to make this motherf*cking ground shake, god damn it.” Other videos show attendees dancing on top of an ambulance in the crowd while Scott performs.

Though Scott stopped the show multiple times to acknowledge that people were hurt, he failed to address the severity of the issue and end the concert. Scott has been known to foster a culture of violence at his performances, often encouraging people to disregard safety protocols. In 2015, he was arrested for reportedly telling fans to climb over the security barricades during his performance at a music festival. And in 2017, he pled guilty to disorderly conduct after being accused of inciting a riot at a performance when he allegedly encouraged people to push past security.

Scott’s response during and after the show has yielded growing calls to abolish “celebrity culture” altogether. Celebrity culture is the extreme exposure to celebrities’ personal lives that often leads to them being idolized by fans and the public at large. This mass exposure is what creates a phenomenon called parasocial relationships: one-sided relationships where one person is invested in another party, often a celebrity, who doesn’t know that said person exists. Some argue that this culture of idolization results in celebrities, like Scott, viewing their fans as being beneath them.

Some are pointing to greed as the reason Astroworld went awry, suggesting that Scott continued to perform despite the pain his audience was in to make a profit. “Astrofest was a combination of poor organization, lack of preparation, awful festival go-ers, awful celebrity culture but more than anything — profit over people,” wrote one user on Twitter.

As the fallout continues on social media, hopefully it will lead to Scott and other performers taking accountability to ensure that safety is a top priority for the people who attend their shows.

Prince William Opens Up About His Mental Heath Struggles

This Fuzzy Bucket Hat is the Accessory of the Season

The Best Stylish and Functional Winter Boots to Invest in Now