Home Fashion Time is a Construct at Gucci’s Cosmogonie Show 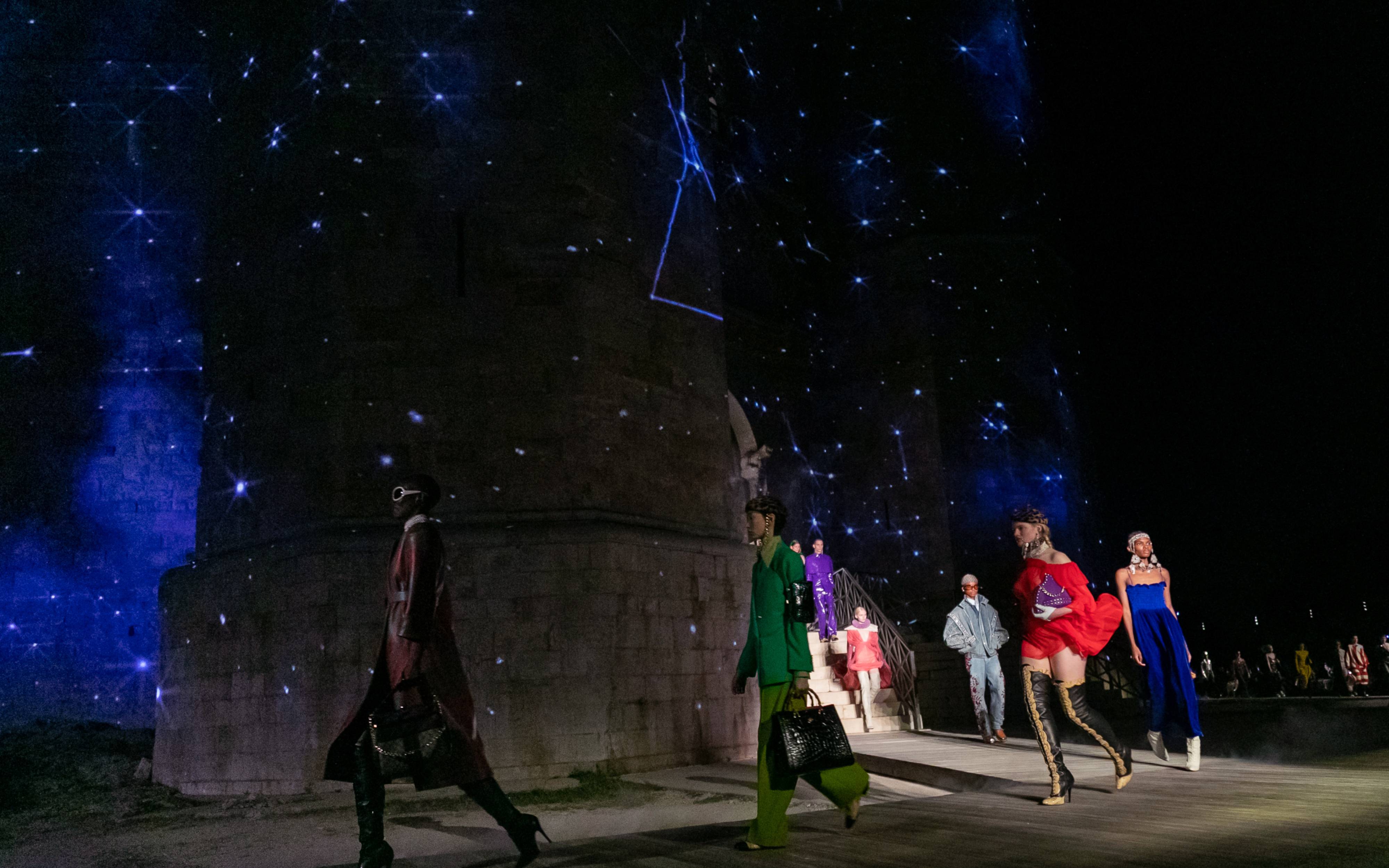 The celestial-inspired presentation featured sartorial constellations that referenced the past, present and future all at once.

Does time mean anything anymore in fashion? If trend cycles repeat every 20 years (take Y2K’s resurgence as one example), can anything ever be considered new? These are the questions that creative director Alessandro Michele posed at the Gucci Cruise 2023 show, Cosmogonie.

Michele chose a 13th-century castle in Puglia, Italy to debut an eveningwear collection that finds the past and present existing in tandem. High-profile guests like Lana Del Rey, Jodie Turner-Smith and Elle Fanning gathered to view the celestial-centric presentation, which featured historical references, astronomy visuals and themes of interconnection.

In his show notes, Michele credits German philosopher Walter Benjamin as his inspiration. He cites Benjamin’s “constellation thinking,” which suggests that everything — past and present — can exist at once. In blurring these dichotomies, new, previously unknown constellations are created that “break the constraints of tradition.” As seen with Gucci’s Love Parade, diving into folklore and history part of Michele’s creative process. And Cosmogonie is no exception.

Through a fanciful lineup of elevated elegance, Michele plays with constructs of time. For starters, there were clever nods to modern-day risk-taking. Case in point: a model in an off-the-shoulder top walked the runway with one exposed breast adorned by nothing but a heart-shaped nipple covering. Other provocative elements, like lace-up thigh-high boots, colourful sheer slip dresses and skin-bearing cutouts were staples of the show.

At the same time, there were nuanced connections to the past. Opulent pearl necklaces, gladiator shoes and Elizabethan ruffs were reminiscent of centuries gone by. And more recent history was referenced through the use of suits. Models wore updated versions of the ‘70s power suit with gem embellishments, exaggerated sharp collars and gender-fluid accessories like knee-high strappy sandals.

Shiny hardware added flashiness to the ensembles through details like dangling lip piercings, bedazzled denim and chainmail veils. These gleaming elements tap into the excitement for a post-pandemic future while reminding us of the collection’s astronomical theme.

With ethereal glowy makeup, metallic dress and rhinestone designs, celestial references were featured throughout. This was emphasized most at the end of the presentation, with the final look being a velvet gown embellished with tiny shining constellations.

The show was Michele’s sartorial interpretation of Walter Benjamin’s work. “What can seem, at first sight, atomized and dispersed, like the stars in the sky, through Benjamin’s eyes becomes an assembly of complicity: a connective structure that lights up the darkness through the epiphany of a constellation,” the designer said in a release.

Gucci’s Cosmogonie takes the complexities of the past and nods to the future and presents them in unity, like one shining constellation in the sky.

Below, swipe through the gallery to see our favourite looks from the Gucci Cruise 2023 runway.

How to Channel the Absurdity of “Emilycore” from Emily in Paris

Are Adam Levine and Tristan Thompson Proof that Pisces Men Are Cheaters?