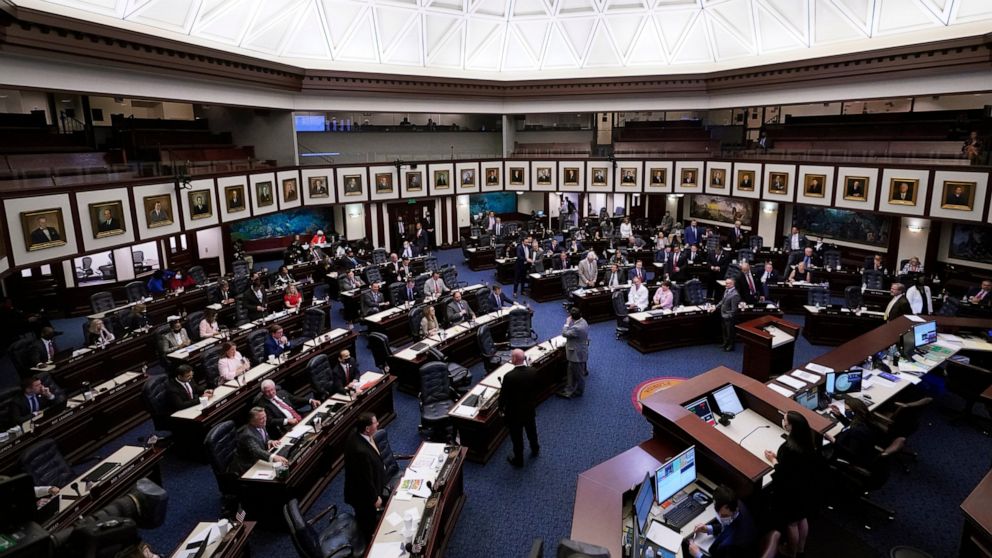 Republicans in the Florida House of Representatives have approved a ban on abortions after 15 weeks, moving to tighten access to the procedure ahead of a U.S. Supreme Court decision that could limit abortion rights in America

TALLAHASSEE, Fla. — Republicans in the Florida House of Representatives early Thursday approved a ban on abortions after 15 weeks, moving to tighten access to the procedure ahead of a U.S. Supreme Court decision that could limit abortion rights in America.

The GOP-controlled House passed the 15-week abortion ban after several hours of debate between Democrats who said the measure would impose an unnecessary burden on women and Republicans who said they were protecting the unborn.

“This is the right to life and to give up life is unconscionable to me,” said Republican Rep. Dana Trabulsy, who disclosed that she previously had an abortion but has “regretted it everyday since.”

Republicans in several state legislatures are moving to place new restrictions on abortion after the U.S. Supreme Court signaled it would uphold a Mississippi law prohibiting abortions after 15 weeks and potentially overturn the landmark Roe v. Wade decision. A decision in that case is expected later this year.

GOP lawmakers in Arizona and West Virginia this week advanced their own 15-week abortion bans and Republicans in other states are modeling legislation after a law in Texas which effectively banned abortions after six weeks.

Florida’s bill contains exceptions if the abortion is necessary to save a mother’s life, prevent serious injury to the mother or if the fetus has a fatal abnormality. The state currently allows abortions up to 24 weeks of pregnancy.

Republicans have repeatedly rejected attempts from Democrats to add additional exceptions in the bill for pregnancies caused by rape, incest or human trafficking.

“As a woman it is my right to make decisions about my body and what is in the best interest of my family,” said Rep. Robin Bartleman, a Democrat. “God forbid your 11 year old is raped and pregnant and you find out after 15 weeks, you don’t get to get your daughter that abortion, that’s what this law says.”

Near the end of the House debate, a group of activists in the House gallery broke out into a chant of “my body, my choice,” forcing the chamber to pause before lawmakers cast their votes.

Gov. Ron DeSantis, a Republican, has previously signaled his support for the proposal. The bill now moves to the Republican-controlled Senate.

Dame Deborah James: ‘One of those special people’