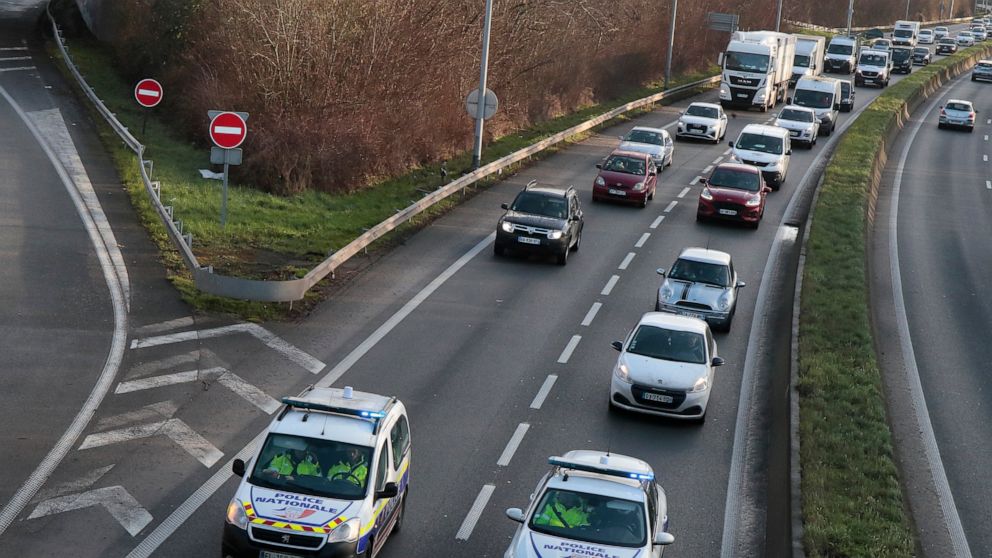 PARIS — Paris police fired tear gas Saturday against a handful of demonstrators on the Champs-Elysees Avenue who defied a police order by taking part in a vehicle protest against virus restrictions inspired by Canada’s horn-honking truckers.

In the Netherlands, dozens of trucks and other vehicles — ranging from tractors to a car towing a camping van — arrived in The Hague for a similar virus-related protest Saturday, blocking an entrance to the historic Dutch parliamentary complex.

But a threatened blockade of Paris failed to materialize Saturday, despite days of online organizing efforts.

Police set up checkpoints into the French capital on key roads and said they successfully stopped at least 500 vehicles from heading to the banned protest, but a few dozen vehicles were able to slip in and disrupt traffic on the boutique-lined Champs-Elysees. Authorities fired tear gas as they demanded that the demonstrators disperse, some of whom climbed onto their vehicles in the middle of the road to create chaos.

An Associated Press photographer was hit in the head with a tear gas canister as police struggled to control the crowd. Police at the scene were growing increasingly tense, and fired the tear gas after several photographers took photos of officers kicking and subduing a protester.

Police detained 54 people and handed out 300 tickets to motorists involved in the protest. Police also seized knives, hammers and other objects in a central Parisian square.

Protesters railing against the vaccination pass that France requires to enter restaurants and many other venues have converged in recent days toward Paris from the north, south, east and west, waving and honking at onlookers as they drove by. Some convoys sought to avoid police detection by traveling on local roads instead of the major highways leading into the capital.

Waving French flags and shouting “Freedom!,” the protesters were galvanized in part by truckers who have blockaded the center of Ottawa, Canada’s capital, and blocked border crossings to the U.S.

Most of the French convoys appeared small, and it is unclear how many people participated. The protest came as months of demonstrations against French government vaccination rules have been waning and as the government is relaxing virus restrictions. Nearly all French adults are vaccinated against COVID-19 and the protests have represented a small minority.

In the Dutch protest, protesters on foot joined the truckers, carrying a banner emblazoned with the Dutch words “Love & freedom, no dictatorship.” Police urged the protesters to move to a nearby park and warned the public about traffic problems.

Online chat groups, meanwhile, are encouraging French and Dutch protesters to join an attempted blockade convoy on Monday in Brussels, capital of Belgium and the 27-nation European Union.

Belgian federal police were urging people to avoid Brussels on Monday, including commuters, and said all vehicles coming to demonstrate will be escorted to a giant parking lot north of town where a protest will be authorized.

Aleksandar Furtula in The Hague, Mike Corder in Ede, Netherlands, and Sylvain Plazy in Brussels contributed.

Follow all AP stories on the pandemic at https://apnews.com/hub/coronavirus-pandemic.

Covid: Norfolk man says he is ‘fighting every day for life’