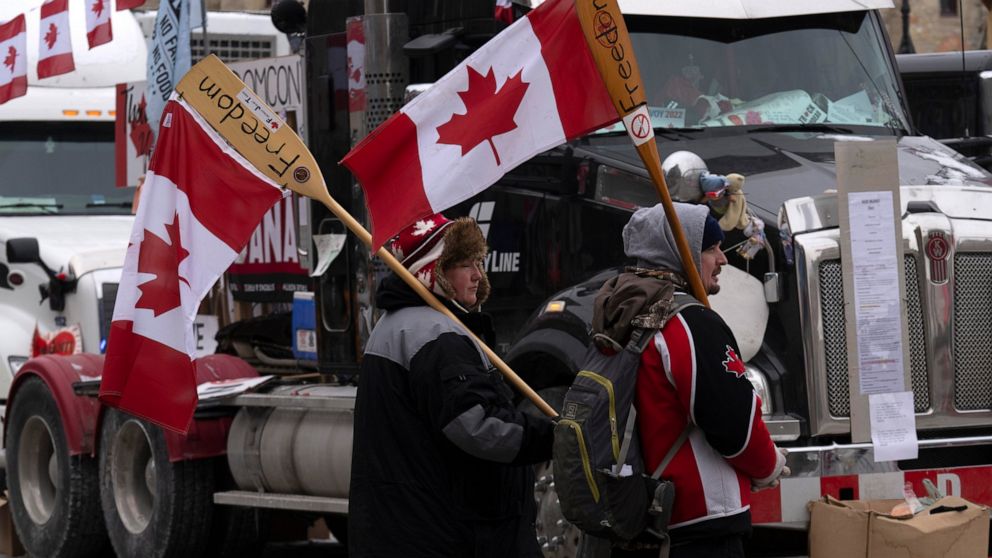 At the same time, protesters abandoned their last remaining truck blockade along the U.S. border — at Emerson, Manitoba, opposite North Dakota, police said. With that, all border crossings were open for the first time in more than two weeks of unrest.

In Ottawa, authorities in yellow “police liaison” vests went from rig to rig, knocking on the doors of the trucks parked outside Parliament, to hand truckers leaflets informing them they could be prosecuted, lose their licenses and see their vehicles seized under Canada’s Emergencies Act. Police also began ticketing vehicles.

Some truckers ripped up the order, and one protester shouted, “I will never go home!” Some threw the warning into a toilet put out on the street. Protesters sat in their trucks and defiantly honked their horns in a chorus that echoed loudly downtown.

At least one trucker pulled away from Parliament Hill.

There was no immediate word from police on when or if they might move in to clear the hundreds trucks by force. But protest leaders braced for action on Wednesday.

“If it means that I need to go to prison, if I need to be fined in order to allow freedom to be restored in this country — millions of people have given far more for their freedom,” said David Paisley, who traveled to Ottawa with a friend who is a truck driver.

Marie Eye, of Victoriaville, Quebec, who has been making soup for the protesters, said the warnings were “just a piece of paper” and doubted police had the manpower to remove the rigs or the protesters.

“It’s not for politicians to tell police when and how to do things. What we have done with the emergency act is to make sure the police have the necessary tools,” Trudeau said Wednesday. “It’s something that I, like all residents of Ottawa, hope to happen soon.”

Since late January, protesters in trucks and other vehicles have jammed the streets of the capital and obstructed border crossings. The demonstrations by the self-styled Freedom Convoy initially focused on Canada’s vaccine requirement for truckers entering the country, but soon morphed into a broad attack on COVID-19 precautions and Trudeau himself.

The protests have drawn support from right-wing extremists and have been cheered on and received donations from conservatives in the U.S., triggering complaints in some quarters about America being a bad influence on Canada.

Amid signs police were losing patience in Ottawa, organizers of the demonstrations encouraged supporters to come to the capital to make it difficult for officers to clear the area. But the nation’s top safety official warned them to stay away or face legal consequences too.

Meanwhile, the premiers of two Canadian provinces and 16 U.S. governors sent a letter to Trudeau and U.S. President Joe Biden calling on them to end their nations’ vaccine mandates for truckers crossing the border.

The bumper-to-bumper demonstrations have infuriated many Ottawa residents, who have complained of being harassed and intimidated on the clogged streets.

Over the past weeks, authorities hesitated to move against many of the protesters around the country, citing in some cases a lack of manpower and fears of violence. But frustration over the government’s inaction has mounted, resulting in the ouster of Ottawa Police Chief Peter Sloly this week.

As of Tuesday, Ottawa officials said 360 vehicles remained involved in the blockade in the city’s core, down from a high of roughly 4,000.

“They don’t want to give this up because this is their last stand, their last main hub,” said Michael Kempa, a criminology professor at the University of Ottawa.

Even after the warnings, a few protesters roasted a pig on the street in front of Parliament, and a child played with blocks in a small playground area on a road lined with trucks.

An Ottawa child welfare agency advised parents at the demonstration to arrange for someone to take care of their children in the event of a police crackdown. Some protesters had their youngsters with them.

Police in the capital appeared to be following the playbook that authorities used over the weekend to break the blockade at the economically vital Ambassador Bridge connecting Windsor, Ontario, to Detroit. Police there handed out leaflets informing protesters they risked arrest.

After many of those demonstrators left and the protest had dwindled, police moved in and made dozens of arrests. The blockade there had disrupted the flow of goods between the two countries and forced the auto industry on both sides to curtail production.

Stephanie Carvin, who once worked for Canada’s domestic intelligence service and teaches national security at Carleton University in Ottawa, said police in the capital face a tricky situation. Some of the protesters are extremists, and police run the risk of violence if they try to disperse or arrest them, she said.

“Minimizing this, ensuring that this isn’t a last stand, is really, really important,” Carvin said. “The last thing we want is any kind of propaganda that can really feed the flames of this movement for years to come.”

Bowel cancer: How to check your poo

Dame Deborah James: ‘One of those special people’