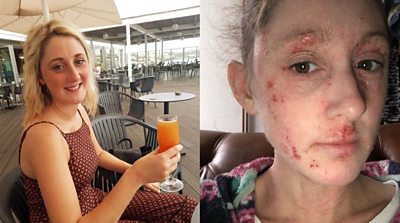 Elin Wade, from Swansea, had hallucinations while using topical steroids and has called for more support for people reacting to skin treatments.

She suffered bad reactions after using creams prescribed for an eczema flare-up.

“I went from being a perfectly healthy 25-year-old woman to being a 29-year-old injecting incredibly potent drugs into my system just to get some sort of relief,” Ms Wade said.

The 29-year-old said she was made to feel like a “fraud” as topical steroid addiction was not recognised as an official condition by the NHS.

Covid: ‘Getting the vaccine in Ramadan helps others’

India Covid-19 second wave: ‘A coronavirus tsunami we had never seen before’

Why are so many babies dying of Covid-19 in Brazil?

4.7 million waiting for operations in England