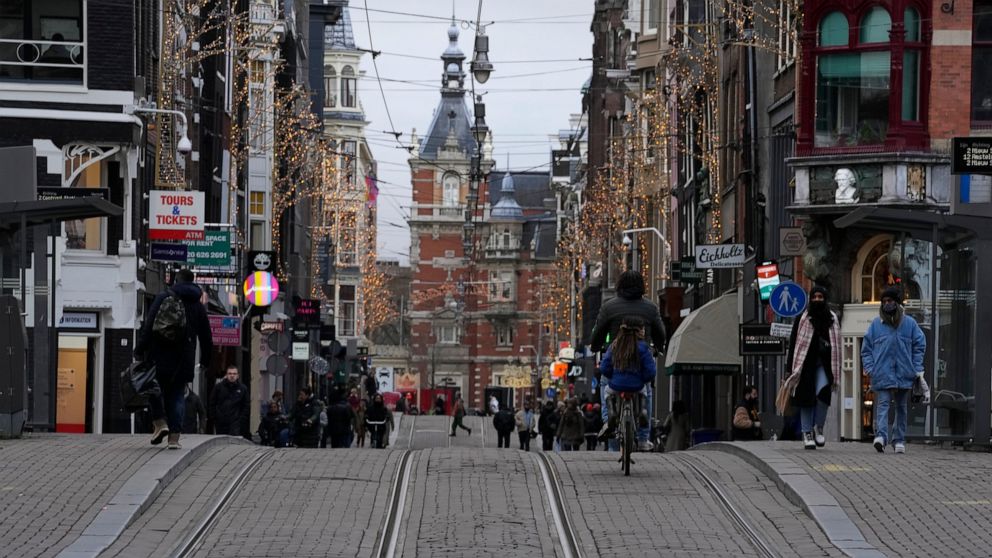 BOSTON — The nation’s second-largest city called off its New Year’s Eve celebration Monday, and its smallest state re-imposed an indoor mask mandate as fears of a potentially devastating winter COVID-19 surge triggered more cancellations and restrictions ahead of the holidays.

Organizers of the New Year’s Eve party planned for downtown Los Angeles’ Grand Park announced that there will no in-person audience. The event will be livestreamed instead, as it was last year.

In Rhode Island, which has the most new cases per capita over the last two weeks, masks or proof of vaccination will be required in most indoor establishments. And in Boston, the city’s new Democratic mayor announced to howls of protests and jeers that anyone entering a restaurant, bar or other indoor business will need to show proof of vaccination starting next month.

“There is nothing more American than coming together to ensure that we’re taking care of each other,” Mayor Michelle Wu said at City Hall as protesters loudly blew whistles and shouted “Shame on Wu.”

Much of the fear centers around the new omicron variant, which scientists say spreads even easier than other coronavirus strains, including delta, and it is expected to become dominant in the U.S. by early next year. Many details about omicron remain unknown, including whether it causes more or less severe illness. But even if it is milder, the new variant could still overwhelm health systems because of the sheer number of infections.

In New York City, where a spike in infections is already scuttling Broadway shows and causing long lines at testing centers, Mayor Bill de Blasio is expected to decide this week whether the city’s famous New Year’s Eve bash in Times Square will come back “full strength” as he promised in November.

North of the border, the Canadian province of Quebec imposed a 10 p.m. closing time for restaurants, banned spectators from sporting events and shuttered gyms and schools and mandated remote work.

Across the Atlantic, the World Economic Forum announced Monday that it would again delay its annual meeting of world leaders, business executives and other elites in Davos, Switzerland.

But in Britain, Prime Minister Boris Johnson said Monday that officials decided against imposing further restrictions, at least for now.

The conservative government re-imposed face masks in shops and ordered people to show proof of vaccination at nightclubs and other crowded venues earlier this month. It is weighing curfews and stricter social distancing requirements.

“We will have to reserve the possibility of taking further action to protect the public,” he said. “The arguments either way are very, very finely balanced.”

In the U.S., President Joe Biden planned to address the nation on the latest variant on Tuesday, less than a year after he suggested that the country would essentially be back to normal by Christmas.

His top medical adviser, Dr. Anthony Fauci, has promised that the Democrat will issue “a stark warning of what the winter will look like” for unvaccinated Americans.

Cases are surging in parts of the U.S., particularly the Northeast and Midwest, though it’s not always clear which variant is driving the upswing.

Data from the Centers for Disease Control and Prevention from earlier this month found that the omicron variant represented 3% of new cases.

But in Texas, one hospital system reports that omicron already accounts for 82% of new symptomatic COVID-19 cases it is treating. That’s a dramatic increase from Friday, when testing showed that omicron was responsible for 45% of the system’s cases, Dr. S. Wesley Long, a medical director at Houston Methodist Hospital, said Sunday in a tweet.

In Missouri, an early epicenter of the delta surge, the variant still accounts for 98% to 99% of COVID-19 samples, according to the state’s Department of Health and Senior Services.

Idaho state health officials on Monday deactivated crisis guidelines for rationing care that had been in place in northern counties since September, saying the number of COVID-19 patients remains high but no longer exceeds available health care resources.

Meanwhile, hospitals in Ohio, Maine and other states have postponed elective surgeries, and governors have sent in National Guard reinforcements to help beleaguered hospital staff in recent days.

In Kansas, rural hospitals are struggling to transfer patients, with some left stranded in emergency rooms for a week while they wait for a bed. Overwhelmed hospitals as far away as Minnesota and Michigan have been calling looking for beds in larger Kansas hospitals. Often there simply isn’t room.

“It’s already as crazy as it can be when you are talking about moving people from Minnesota to Kansas City for treatment,” Dr. Richard Watson, founder of Motient, a company contracting with Kansas to help manage transfers, said Friday.

Still, many political leaders are reluctant to impose the stiff measures they resorted to earlier in the pandemic.

France is desperately trying to avoid a new lockdown that would hurt the economy and cloud President Emmanuel Macron’s expected re-election campaign. The government in Paris, however, has banned public concerts and fireworks displays at New Year’s celebrations.

Ireland has imposed an 8 p.m. curfew on pubs and bars and limited attendance at indoor and outdoor events, while Greece will have 10,000 police officers on duty over the holidays to carry out COVID-19 pass checks.

In Spain, where the national average for new cases is double what it was a year ago, authorities are betting primarily on mandatory mask-wearing indoors, with no further restrictions planned. Neighboring Portugal is simply telling most nonessential workers to work from home for a week in January.

Cases of omicron are doubling in Britain about every two days, and the latest surge has decimated the economy in the busy pre-Christmas period. The government has so far pinned its hopes on vaccine boosters. It has set up temporary clinics in soccer stadiums, shopping centers and cathedrals to meet a goal of offering everyone 18 and up an extra shot by the end of the month.

U.S. vaccine maker Moderna announced Monday that lab tests suggested that a booster dose of its vaccine should offer protection against omicron. Similar testing by Pfizer on its vaccine also found that a booster triggered a big jump in omicron-fighting antibodies.

But some leaders warn that boosters alone aren’t enough and that tougher action will be needed.

“Omicron,” he said, “won’t forgive us any carelessness if we aren’t cautious.”

Follow all AP stories on the pandemic at https://apnews.com/hub/coronavirus-pandemic.

4 people, including infant, freeze to death being smuggled across US-Canada border

CIA says foreign actor may be behind some Havana syndrome cases