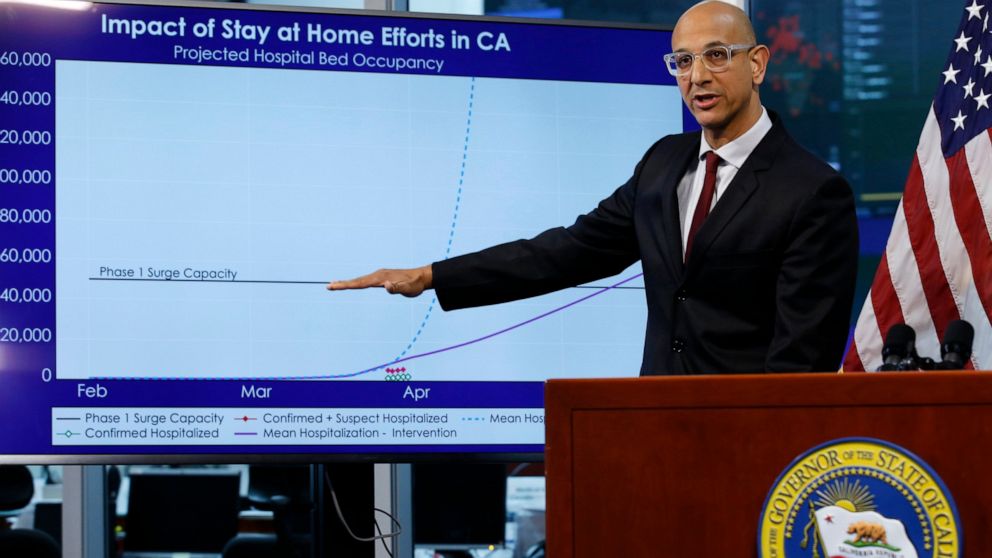 Los Angeles County, which has recorded 40% of all COVID-19 deaths in the state, reported another 227 new deaths on Tuesday, although the new daily record included reporting from holiday backlogs. The county’s public health department also confirmed its highest number of hospitalizations reported in a day, at more than 7,000 people, a nearly 1,000% increase from two months ago.

California’s top health official, Dr. Mark Ghaly, announced Tuesday an extension of the Dec. 6 lockdown restrictions for the county and 22 others in Southern California and the agricultural San Joaquin Valley. The regions have about 60% of the state’s population of 40 million and also have seen COVID-19 surges since the Thanksgiving holiday that have left hospitals struggling to find beds for emergency room and intensive care unit patients.

Some hospitals have set up tents to hold ER patients and one converted a disused cafeteria to handle patients.

State officials notified hospitals late Monday they should prepare for the possibility that they will have to resort to “crisis care” guidelines established earlier in the pandemic, which allow for rationing treatment when staff, medicine and supplies are running short.

Some hospitals don’t have space to unload ambulances or get oxygen to patients who can’t breathe although “we have not heard yet that any hospital is at the point where they need to make a decision between two patients who both need a ventilator, and they only have one ventilator,” Ghaly said.

Ghaly and other health officials have said people ignoring social distancing to gather with friends and relatives over Thanksgiving led to a “surge on top of a surge” that has resulted in the medical crisis.

The hospital rates appeared to be stabilizing in general statewide but they remained explosively high in the south, and Ghaly urged people to stay home on New Year’s to avoid an even worse surge in January and early February.

San Francisco’s health director said the holiday serves as a reminder that “the power is in our hands to continue to turn this surge around.”

California reported more than 31,000 new cases Tuesday and 242 deaths, but the numbers are likely to increase this week as labs and counties catch up their reporting from the Christmas week. More than 2 million people have been diagnosed with COVID-19 in California and nearly 25,000 people have died from the virus.

This is how close we are to the apocalypse, scientists say

Biden’s inauguration was third most viewed in TV history

Capitol Police chief apologizes for riot ‘failings,’ acknowledges ‘we knew that there was a strong potential for violence’