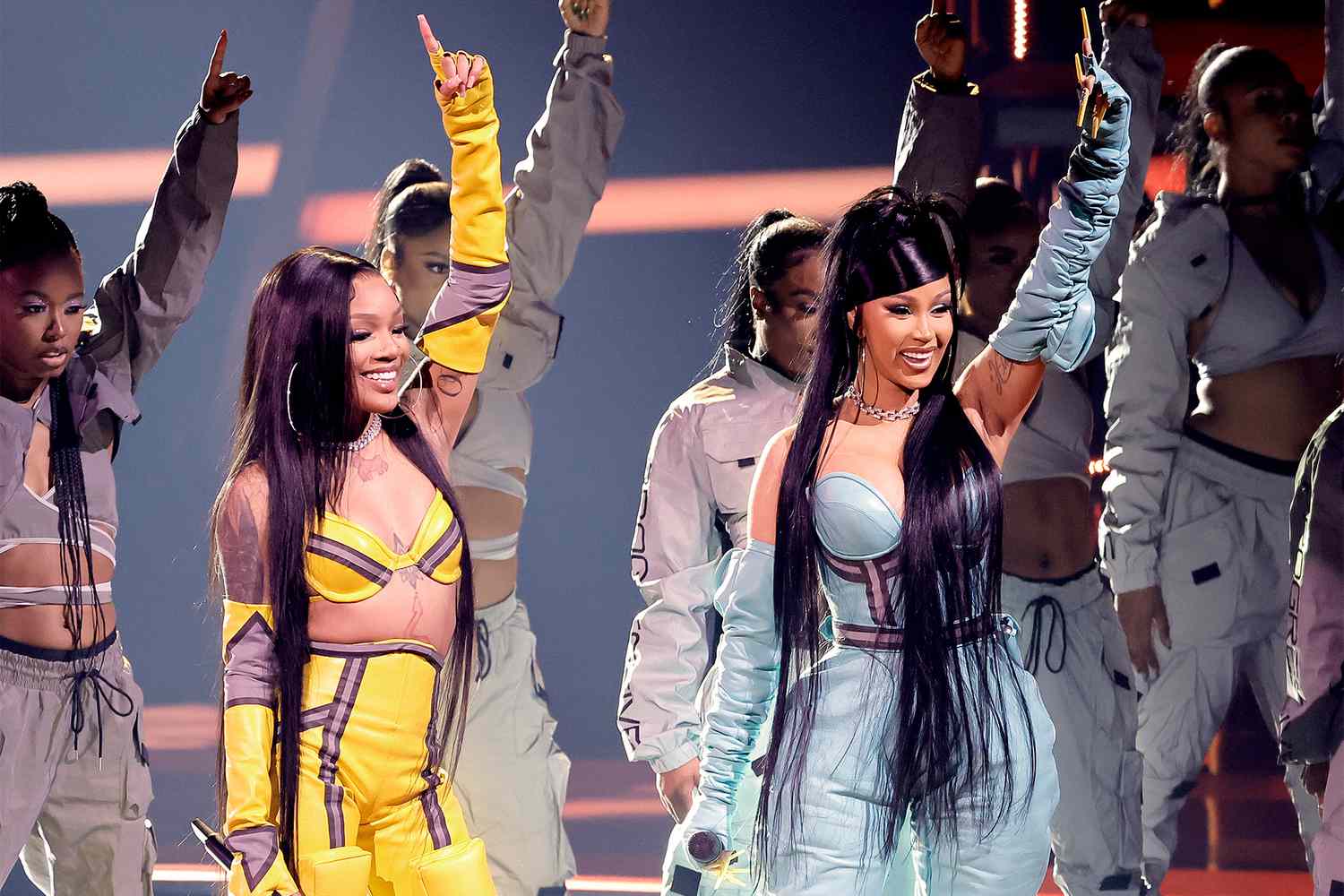 Cardi B stole the show at the 2022 American Music Awards on Sunday.

The 30-year-old rap superstar made a surprise appearance alongside GloRilla to deliver the debut performance of their hit “Tomorrow 2,” a remix of the 23-year-old rapper’s single “Tomorrow,” on the awards show, held at the Microsoft Theater in Los Angeles on Sunday. The televised performance marked Cardi B‘s first since the death of rapper Takeoff, who was in Migos with Cardi B‘s husband, Offset, and Quavo.

GloRilla, 23, started the performance wearing a sporty yellow bralette paired with matching high-waisted pants and long gloves as she rapped the first half of the song alongside dancers in white versions of her outfit. Cardi B then appeared, coming out of a purple sports car with open doors and wearing a similar outfit to GloRilla’s in baby blue as she performed her verse.

The pair then performed choreography with the dancers, and Cardi B held an endearing grin on her face through the end of the performance, sticking her tongue out as she hit each mark.

It’s been a week of surprise performances for Cardi B, who popped up at her friend Lizzo’s Special Tour stop at the Kia Forum in Inglewood, California on Friday to rap “Rumors” alongside the performer.

“Lizzo show was amazing !It was very pretty, very positive and I saw Missy Elliott,” tweeted Cardi B after the concert, which also saw Elliott appear to perform “Tempo” with Lizzo.

“I am a Fan of Cardi B!” wrote Lizzo, 34, on Twitter following the performance. “I been following her since before love&hiphop… But as much as I fan over her as an artist, who she is as a PERSON is UNMATCHED. @iamcardib thank U for always coming thru for me, for standing up for us when you don’t have to. U the peoples champ! I LOVE U.”


Earlier this week, Cardi B addressed the late Takeoff — who was shot and killed in Houston at age 28 earlier this month — in an emotional post on Instagram.

“Takeoff your untimely passing has brought a great deal of pain and sorrow to so many lives,” began the “I Like It” performer. “The impact you had in this world was so considerable and we have struggled to grasp this tragedy.”

“I am heartbroken but I am grateful for all the precious memories we got to share while you were here with us,” she continued. “This has truly been a nightmare and the pain is incomparable.”

Host Wayne Brady spoke of Takeoff’s death during the live show, saying, “We recently lost Kirsnick Khari Ball, better known as Takeoff, one-third of the groundbreaking hip-hop group Migos,” Brady said. “On behalf of all of us that love hip-hop all around the world, we thank you, Takeoff, for your artistry, and tonight, we honor your memory.”

The 2022 AMAs are airing live Sunday night from the Microsoft Theater in Los Angeles.