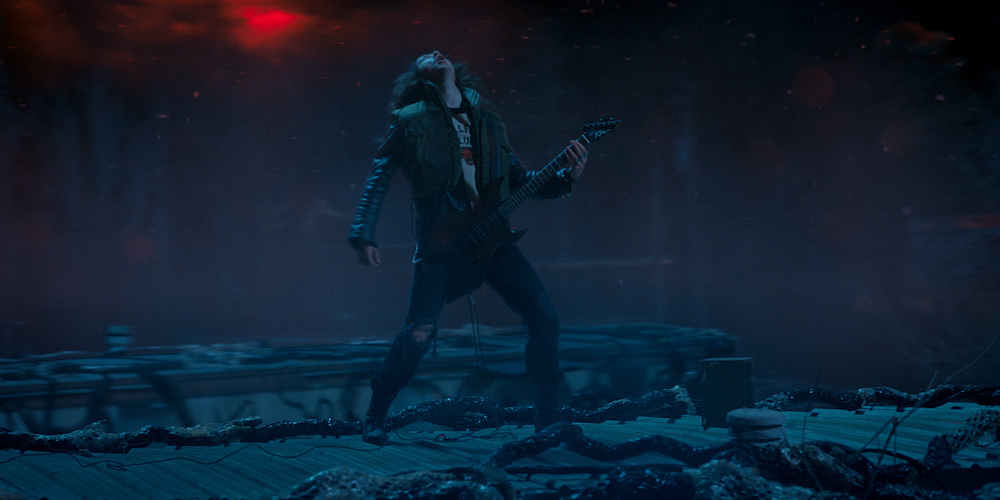 SPOILER ALERT: Do not read if you have not watched Episodes 8 and 9 of “Stranger Things 4,” now streaming on Netflix.

If Kate Bush’s “Running Up That Hill” was the official song of Memorial Day weekend, then Metallica’s “Master of Puppets” may well have been the one for Independence Day weekend.

Thanks to the latest season of Netflix’s “Stranger Things,” Bush’s 1985 hit — which saves the character Max’s life — soared toward the top of the U.S. charts after it was featured in season 4. In the second volume of season 4, the Eddie Munson character (Joseph Quinn) heads into the Upside Down with the rest of the Hawkins crew and promises to take on the evil Vecna.

In the scene, Eddie grabs his guitar and plays “Master of Puppets” by Metallica, performing “the most metal concert ever.” As he riffs on his guitar, the bats surrounding Vecna’s lair are lured away, leaving Steve (Joe Keery), Nancy (Natalia Dyer) and Robin (Maya Hawke) to attack the demon.

Metallica frontman James Hetfield has said the song, from Metallica’s 1986 breakthrough album of the same name and widely considered one of the band’s all-time classics, is essentially about drugs and how addiction controls people, but its lyrics can be perceived to be about many master/puppet situations. It runs at an epic 8:35 and ranges from crushing riffs to a progressive-rock middle section.

The show’s music supervisor, Nora Felder, explains that executive producers Matt and Ross Duffer — a.k.a. the Duffer brothers — had woven the song into the script during pre-production.

“It was another one of those ‘it has to be this song,’ moments,” Felder says. “This part of the story was anticipated to be a pivotal and especially hair-raising scene in which Eddie heroically stood tall for the fight of his life. I believe the Duffer Brothers felt that playing ‘Master of Puppets’ throughout the extended scene was the clear choice. No other song was discussed further, and we jumped in to clear it straight away.

The track was a perfect match for Eddie since it not only amplified the episode’s most thrilling scene, but “in some ways, aligns with Eddie’s seemingly arrogant and edgy in-your-face public persona.”

Until that moment, Eddie has been misunderstood. Felder says, “The Talisman-like qualities of Eddie’s guitar and punk metal music help him reconnect to his closely-guarded traits of love, care, and courage.”

Felder adds, there are similarities between Vecna and the drugs referenced in “Master of Puppets.” She says, “They share similarities in that they each have life-destroying powers that rob people of their essential personal powers. The aggressive up-tempo metal sound belies its cautionary psychological and socially conscious lyrics, which are rooted in a sensitive concern for others. The sensitive side that we’ve seen in Eddie, which is clearly evident in the scene when he meets up with Chrissy, is similarly masked and concealed by Eddie’s abrasive public image.”

When it came to securing the needle drop, all clearances had to go directly through the band. She says, “I got in touch with Metallica’s management office and carefully went over the scene and what the intent would be. I knew the clearance would be taken seriously as we had used one of their songs (‘The Four Horseman’) in season 2 and had learned at that time that they were fans of the show. ‘Master of Puppets’ is a pretty significant song in their catalog, and I think it’s considered a favorite in their live shows. I wanted to be respectful in making sure that Metallica fully understood what context the song was being used in, plus how integral it was to the scene and for this exciting new character, Eddie Munson, who no one had met yet in previous seasons.”

The band signed off on the pitch.

Eddie plays an instrumental version of the beloved song, and yes, that is Quinn actually playing the guitar. Felder confirms, “Yes, Joseph did take time to learn the guitar riff and was actually playing along to a guide track. Everyone thought he did a great job.”

In Switzerland, People Commute From Work by Floating Down This Gorgeous...

Gulf Shores Airbnb Rentals Near the Beach and the Best of...

Herschel Walker Says Paying for Abortion Is ‘Nothing to Be Ashamed...