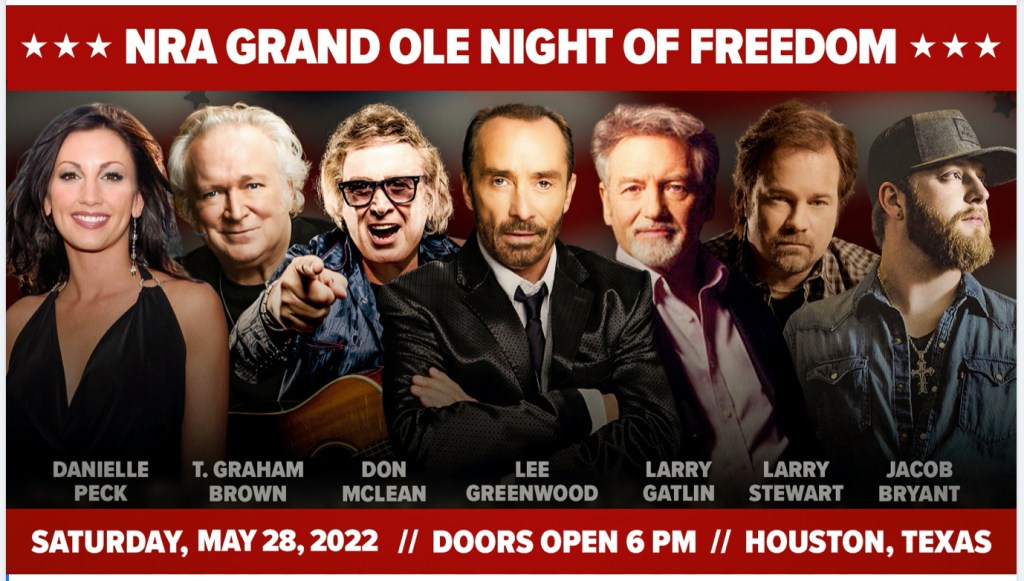 UPDATE: Jacob Bryant, the last remaining performer on the bill for the NRA’s “Grand Ol’ Night of Freedom” concert scheduled for Saturday, tweeted Friday afternoon that “The show has been canceled since yesterday,” although tickets remain for sale for the NRA’s website.

Following Don McLean, Larry Gatlin and Larry Stewart, right-wing country singer Lee Greenwood announced that he is pulling out of the concert scheduled to take place at the NRA rally in Houston over Memorial Day weekend, followed in short order by T. Graham Brown and Danielle Peck. Their departures leave the concert with one remaining performer, Jacob Bryant, although he reportedly replied to a fan via Twitter that the concert “isn’t happening.” It seems inevitable that the concert will be canceled, although it remained advertised on the NRA’s website (listing performers who had pullled out), with tickets still for sale, as of 9 a.m. ET Friday morning.

In a statement, Greenwood said: “As a father, I join the rest of America in being absolutely heartbroken by the horrific event that transpired this week in Texas. I was scheduled to perform at NRA’s private event on Saturday with my band. After thoughtful consideration, we have decided to cancel the appearance out of respect for those mourning the loss of those innocent children and teachers in Uvalde.

“During this Memorial Day Weekend, we should also remember the servicemen and women, and first responders who’ve given their lives to protect our great country. Please join me to pay our respects as we unite together as would be the most appropriate measure at this time.

The concert is part of a larger rally organized by the National Rifle Association, which also features speeches from former President Donald Trump, Texas Governor Greg Abbott and Texas Senator Ted Cruz; “over 14 acres of guns and gear and 800 exhibitors,” a firearms law seminar, a prayer breakfast and other activities. The event is going forward even though it is taking place just three days after — and less than 300 miles from — Uvalde, Texas, where a school shooting Monday killed at least 19 children and two adults. It was the deadliest and at least the tenth mass shooting and the 27th school shooting in the U.S. this year alone — including one in Houston just two weeks ago, in which two men were killed and three critically wounded.

The NRA said in a statement that meeting attendees will “reflect on” the Uvalde school shooting, “pray for the victims, recognize our patriotic members, and pledge to redouble our commitment to making our schools secure.” As they customarily do, stock prices for guns and ammunition companies have soared in the wake of the tragedy.

In a statement that is strikingly at odds with the comments by Republican congresspeople and governors, Gatlin supported background checks for firearms purchases — although he also makes the asinine claim that the killings would not have taken place “if the teachers had been proficient in the use of firearms and had, in fact been armed,” as if a teacher with a pistol could have overpowered a highly motivated murderer with two assault rifles.

Gatlin’s statement said in part, “I cannot, in good conscience, perform at the NRA convention in Houston this weekend. While I agree with most of the positions held by the NRA, I have come to believe that, while background checks would not stop every madman with a gun, it is at the very least a step in the right direction toward trying to prevent the kind of tragedy we saw this week in Uvalde— in my beloved, weeping TEXAS.

It is not a perfect world and the ‘if only crowd’s’ policies will never make it one. I am a ‘what if guy’ and I can’t help but ask the question, ‘What if the teachers had been proficient in the use of firearms and had, in fact been armed this week? My answer is that there would not be 21 freshly dug graves for 21 of GOD’s precious children.”

Republican leaders such as  Cruz and Mitch McConnell and Texas Governor Greg Abbott, all of whom received A+ ratings from the NRA, have said that calls for gun control is “politicizing” the issue.

As of Thursday, the gun-lobbyist organization’s annual meeting was still scheduled to take place at the city’s George R. Brown Convention Center from Friday to Sunday, according to its website.

Reps for the NRA did not immediately respond to Variety’s requests for comment, although Michael Heckman, CEO of Houston First, the government corporation that oversees the convention center, told Newsweek he was not aware of any plans to cancel the event or change the schedule in the wake of the school shooting. Rep for Trump and Governor Abbott did not immediately confirm whether the former president and the governor will continue with plans to speak at the event.

However, Abbott called for flags in the state to be lowered to half-staff on Tuesday in memory of the victims.