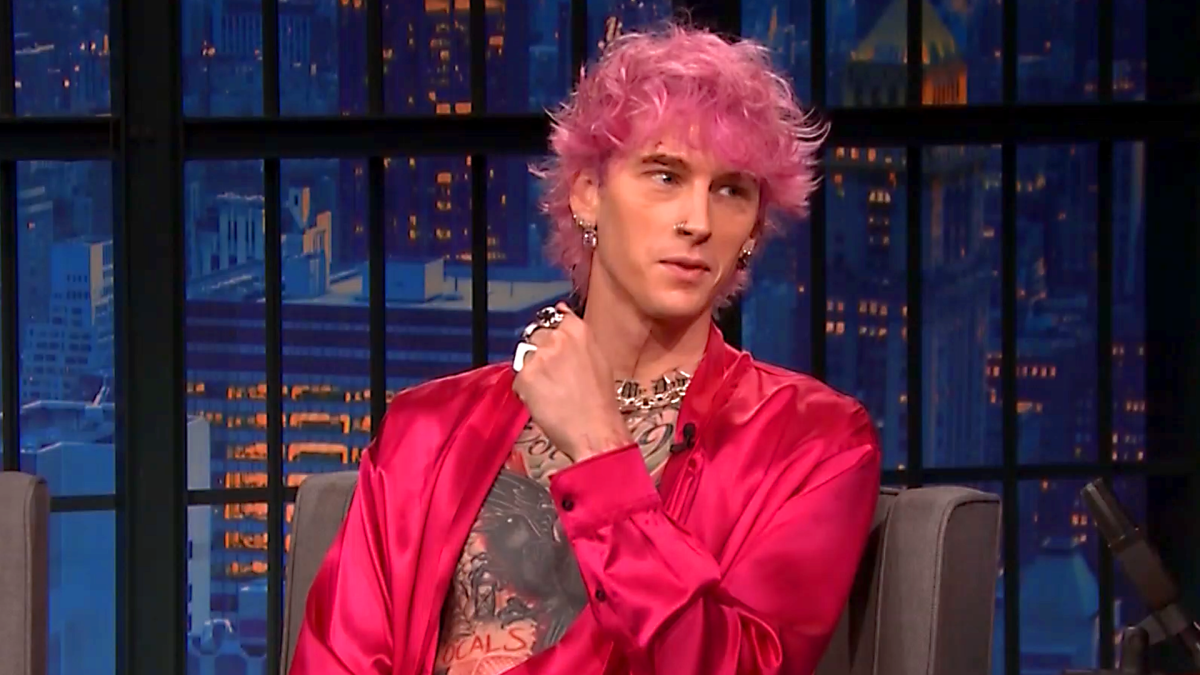 Machine Gun Kelly stopped by Late Night With Seth Meyers, Wednesday, where he spoke about the bloody head injury he sustained while performing at Madison Square Garden in New York City the night before. Meyers joked that maybe it wasn’t a coincidence.

“Last time you were here, you’d just done the VMAs, you’d hurt your hand at the VMAs,” Meyers said, “and you hurt yourself again last night at MSG.”

“Yeah,” Kelly replied, “I’m gonna start having doctors around me every time I see ‘Seth Meyers’ on my schedule.”

The self-sustained injury happened when Kelly broke a champagne flute over his head, cutting his face near his right eye. Needless to say, the accident was avoidable.

“You know when you clink a champagne glass with a fork? … Yeah, I didn’t have a fork,” Kelly said. “So I just clinked it on my head.”

Kelly was covered in blood after the incident, and nearly reopened the wound on Late Night when he rubbed his face while wearing several rings. And Meyers pointed out that he kind of had it coming.

“You know what?” Meyers asked. “In medicine, they call that asking for it.”

“Yeah,” Kelly replied, “so I had a serious case of that last night.”

Watch Alexandria Ocasio-Cortez call out Mark Meadows for seeking pardon: ‘He knew he was breaking the law’:

Frank Ocean has released a $25,000 diamond-encrusted sex toy, making him the latest celebrity to sell products for pleasure

Juliana Hatfield’s hopeless devotion to Olivia Newton-John: ‘Everything I do is influenced by my love for her’

John Travolta and others pay tribute to Olivia Newton-John after her death: ‘I love you so much’

Pete Davidson Has Been in Trauma Therapy Due to Kanye West’s Online Harassment: Source

Tell us about your favourite ice cream parlour for the chance...

Quinta-ssential Portugal: a campervan tour of farms, villages and flavours