Home Lifestyle Music Sparks and Edgar Wright talk ‘The Sparks Brothers’ documentary and that one... 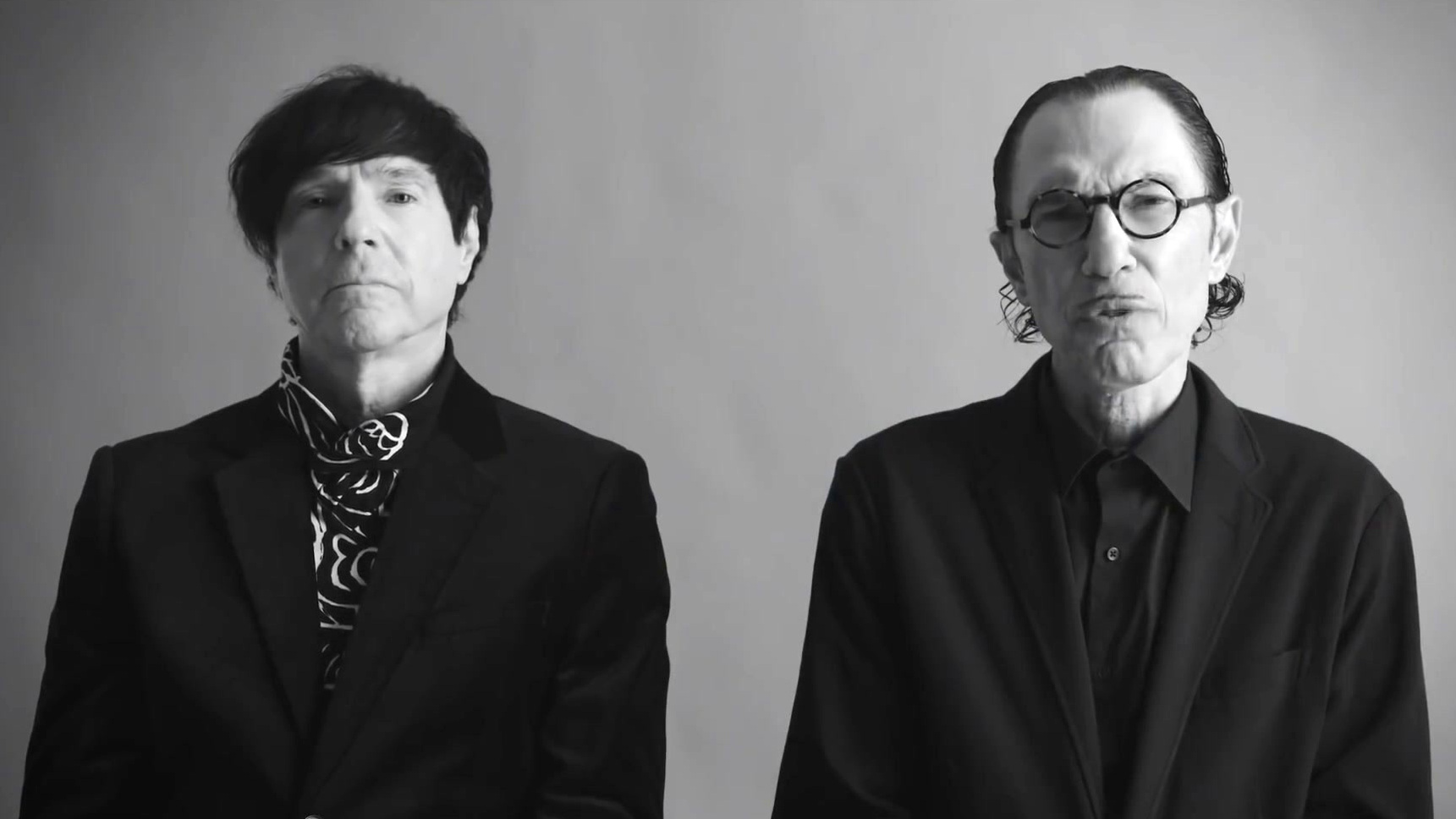 During the first few minutes of The Sparks Brothers — superfan Edgar Wright’s 140-minute documentary spanning the 50-year career of shrouded-in-mystery sibling duo Sparks — other superfans like Beck, Duran Duran, Björk, the Red Hot Chili Peppers’ Flea, the Sex Pistols’ Steve Jones, “Weird Al” Yankovic, Jane Wiedlin of the Go-Go’s, and even Neil Gaiman make a very solid argument that Sparks is one of the most influential acts of all time. In one particularly trailer-worthy soundbite, Jack Antonoff even boldly hypothesizes that “all pop music is rearranged Vince Clarke and rearranged Sparks.” Depeche Mode/Yazoo/Erasure founder Clarke is actually in the documentary singing Sparks’s praises as well, but Yahoo Entertainment just has to ask the band’s Ron and Russell Mael themselves if they agree with Antonoff’s theory.

“Jack Antonoff is a great producer and musician, so he’s gotta be right,” frontman and younger brother Russell deadpans.

“The good thing about the documentary — one of the many good things — is that other people could answer those kinds of questions for us, without us sounding like arrogant bastards,” humble keyboardist Ron chuckles. “It was extraordinary to us to hear, because we work in such a confined kind of way, to have other people explaining what our music had meant at least to themselves and also just in a broader sense. It feels much more comfortable having Neil Gaiman talking about us than having us talking about us.”

“I think there’s obviously people that will acknowledge an influence from Sparks. There’s people who won’t acknowledge it. And then there is a third generation of bands who, as Beck points out [in the documentary], maybe don’t know that the lineage goes back to Ron and Russell. And I think one of the reasons for doing the documentary is to show the chronology,” says Wright, whose eccentric directorial style on movies like Shaun of the Dead, Hot Fuzz, and Baby Driver made him the ideal filmmaker to bring the cult band’s story to the big screen. “I’ve actually heard that from some people who’ve watched the movie, that they had this kind of growing sense of like, ‘Oh, I see — that [newer, clearly Sparks-influenced] band that I like doesn’t seem quite so original anymore!’”

Sparks’s 25-album, 345-song discography spans everything from glam to proto-punk to new wave to post-disco to baroque chamber pop — which, Wright acknowledges, can be daunting even for an already initiated Sparks fan. As for record recommendations for newbies only now learning about the band via The Sparks Brothers, he muses, “Obviously there are several classic albums, but no one album tells the whole story.” Wright eventually whittles it down to five — 1974’s Kimono My House, 1979’s No. 1 in Heaven, 1982’s Angst in My Pants, 2002’s Lil’ Beethoven, and 2017’s Hippopotamus. (Russell simply suggests “probably one of the best-ofs,” and Ron’s characteristically droll answer to that query is: “Or a Vince Clarke album.”)

Every fan can cite a different album that was their specific introduction to Sparks — “That’s the other odd thing, that everyone who is aware of Sparks has their period when they jumped in,” says Russell — but for many Gen X kids, like 47-year-old Wright himself, it was the new wave era, starting with the Giorgio Moroder-produced No. 1 in Heaven. “That period was really special, because it was sort of the three of us, Giorgio and Ron and I, not knowing what was going to be the end result of it. I think that kind of naiveté, when you go into something not knowing what you’re going come up with, is really special. It was one of those albums that kind of set this blueprint for working as a duo, working with electronics, and working with more danceable stuff,” Russell recalls.

The band’s reinvention as sequined-jacketed new wave darlings peaked with Angst in My Pants and perfectly coincided with the advent of MTV, landing Sparks in rotation alongside the musicians who’d idolized them like Duran Duran and Depeche Mode. But because the Maels were always pushing the envelope, one surreal Angst in My Pants music video was only played by MTV very late at night, due to its “adult nature.”

That video, “I Predict” — a cinematic classic in its own right — was so bizarre, even by early-MTV standards, that for years it was rumored to be directed by David Lynch. (As it turns out, “I Predict” was lensed by Lynch’s Eraserhead/Blue Velvet cinematographer, Frederick Elmes — who also was the DP for Valley Girl, which featured a Sparks song during a sex scene. So, it all kind of makes sense.) Groans Ron, “I’m not sure if [MTV played the “I Predict” video often], but apparently too many people have seen it since then, in one way or another. I would really like to get that erased from my history, but that’s the way it is.” It’s at this point in Yahoo’s interview that Wright amusingly reminds Ron that the “I Predict” video isn’t just featured in The Sparks Brothers movie — “It’s in the trailer!” — so there’s little chance of it being erased from pop history now.

“There are things in that video… to the people that haven’t seen it, it’s me doing a bit of a striptease that I thought was a good idea [around] 1981, and probably wouldn’t be considered such a great idea at the present time,” laughs Ron, who donned mustachioed day-drag and did a grotesque burlesque routine in a shabby L.A. strip club for the avant garde, low-budget clip. “Anything that’s a video is forever. And people mention that now all the time. It stands out, maybe just because of the sheer embarrassment of watching.”

As for that distinctively Lynchian aesthetic, Ron recalls, “One thing was that they needed a cast of kind of seedy-looking people around the stage in front of me. And rather than going to professional extras, they just went just out on the street to kind of a homeless shelter and found people. And the people were really extraordinary because they really were very natural and really into cheering on me as a stripper — which, I don’t know, said something about their problems.”

Rumor and speculation has surrounded Sparks from the beginning of their career — for instance, when the band’s 1974 breakout single “This Town Ain’t Big Enough for Both of Us” went to No. 2 in the U.K., many fans actually thought the Los Angeles-born Maels were British (which the self-declared Anglophiles considered a major compliment). Others mistook them for German. “We’ve had French, too,” chuckles Russell (an interesting observation, considering that Sparks just collaborated with French filmmaker Leos Carax on the Adam Driver/Marion Cotillard movie musical Annette). Russell admits that he and Ron were actually wary of revealing too much of themselves in The Sparks Brothers.

“We discussed that with Edgar,” Russell explains. “We’ve always managed to retain this kind of mystery in a certain way; people don’t know too much about the band. We always thought that our music kind of speaks louder than we can ever do, and that the image that people have about the band, either from live performances or what they see on videos, should kind of represent what the band is. And that maybe us talking about ourselves for two hours and 20 minutes would lessen that mystique.”

Meanwhile, the elder Mael’s “bigger fear” was “whether we as people were interesting enough to command a two-hour-and-20-minute music documentary. … We felt, ‘Are we kind of being arrogant by having two hours and 20 minutes of people talking about us?’” But Wright’s original cut was apparently six hours long, so clearly there was plenty to talk about, and there was no shortage of Sparks admirers willing to wax poetic on camera.

“I think you just kind of let the people tell the story from that perspective, in the sense that there’s no minimum amount of knowledge you need to know about Sparks,” says Wright. “I think also a lot of music documentaries sometimes make the mistake of assuming you know the artist already — and that can be great if you’re already a fan, but if you’re watching the documentary to learn to love them, it’s sometimes tough. So with that sense, I just wanted to sort of let people fall in love with Sparks and hear some of the songs.”

The Sparks Brothers chronicles the highs and lows, both commercially and (in much rarer instances) artistically, of Sparks’s career, but Ron and Russell clearly have plenty of songs left in them. At the respective ages of 75 and 72, they’re still doing some of their best work — along with the soundtrack for Annette, which will open the 74th Cannes Film Festival in July (“It’s really crazy that these two films have kind of emerged at around the same time,” marvels Russell), their 25th studio album, A Steady Drip, Drip, Drip, came out to rave reviews last year. “For us, part of doing what we’re doing is doing it as a cause. It’s kind of ‘us against them’ — and we don’t even know exactly who ‘them’ are,” says Ron. “We feel that we need something to be trying to stop us, in a certain sense, to really push through. And that kind of has always been a motivation: that people thought that we weren’t able to do something, and we would just continue doing it.

“And the other thing is, there’s a certain arrogance in saying this, but we’re not hearing the kind of music that for us should be out there,” Ron continues. “And so, that’s the music that we’re doing. We’re not necessarily saying we’re right or wrong about that, but what we are doing isn’t being done by other people, and we feel that it needs to be at least a part of the popular musical environment. We’ve kind of always felt that. And that’s one big motivating factor through all of our years.”

Portions are this article are taken from Sparks’s interviews on the SiriusXM show “Volume West.” Full audio of those conversations are available via the SiriusXM app.

Nightbirde drops out of ‘America’s Got Talent’ to focus on cancer battle: ‘Life doesn’t always give breaks to those that deserve it’

Cynthia Erivo talks Black representation in U.K. pop, her debut album and the one song that drove her to tears: ‘I could barely get...