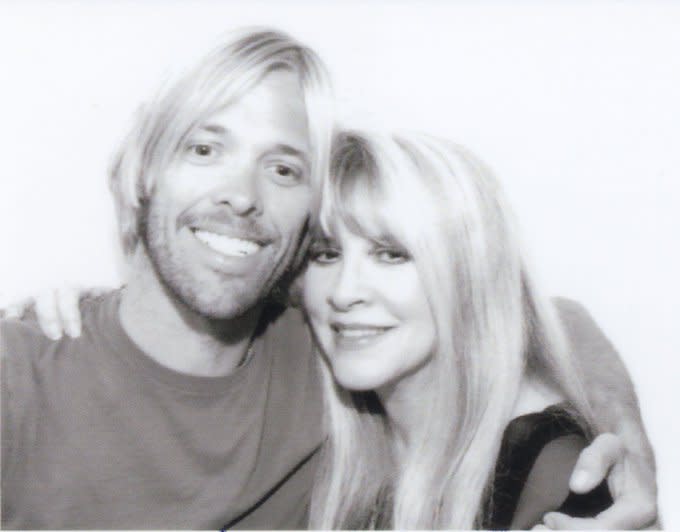 Stevie Nicks is among the slew of musicians that are mourning the death of Foo Fighters drummer, Taylor Hawkins, who was found dead in Bogotá, Colombia on Friday, March 25. He was 50.

On Saturday, Nicks shared a touching tribute to Hawkins on Twitter and Instagram, posting two black and white photos of the pair smiling as they posed side-by-side. Accompanied with the photos on Twitter were screenshots of a message Nicks penned for the late drummer, writing in part, “I just have to say~ Thank goodness for the photo booth in the Foo Fighters studio.”

“Because of these pictures my friendship with Taylor will always be at my fingertips,” she continued. “He always came to my shows. He and his best friend Dave even let me be a Foo Fighter for a little while. We recorded a kick a— version of Gold Dust Woman (live) and at the end of the song I yelled out ‘Best Gold Dust Woman ever~’ And I meant it.”

She continued her tribute message, writing, “Taylor was very handsome and he was very cute. Sometimes that combination is way better than ‘beautiful.’”

In another screenshot, Nicks shared a poem about Hawkins untimely death, writing, “I am sad now / I am really sad / It’s like rolling thunder / Yes, that’s what I said.”

“It’s like a bad dream~ / Comes like a wave~ / Gives you a moment / And then drags you away,” she wrote. “Our hearts are broken / We will never been the same / As I write these words~ / I feel the pain / But I will always remember~/ That the laughter and the fame / Brought us together / To play the game / And we played it, again and again and again / And it was extraordinary.”

In 2013, Nicks appeared alongside Foo Fighters frontman, Dave Grohl, the late Hawkins, and the band’s keyboardist, Rami Jaffee, on the soundtrack to the 2013 documentary film “Sound City,” called “Sound City: Real to Reel.” The group appeared on a song called “You Can’t Fix This,” which was recorded in Grohl’s Studio 606.

On Friday, March 25, a statement announcing the death of Hawkins was released on the official social media accounts of the Foo Fighters, calling his death “tragic and untimely.”

“His musical spirit and infectious laughter will live on with all of us forever,” the statement read. “Our hearts go out to his wife, children and family, and we ask that their privacy be treated with the utmost respect in this unimaginably difficult time.”

Colombian authorities said on Saturday that Hawkins had 10 substances in his system when he was found dead. The office of the Attorney General of Colombia shared the update in a tweet, revealing that a preliminary toxicology test found substances which included benzodiazepines, opioids, THC, and tricyclic antidepressants.

The investigation is still ongoing and no official cause of death has been released.

Mick Jagger Dismisses Harry Styles Comparisons: ‘He Just Has a Superficial Resemblance to My Younger Self’

Mick Jagger on staying fit — and rocking out — at 78: ‘Doing anything high-energy at this age is really pushing it’