There have been signs of change in the air for a couple of weeks now. Birdsong has returned to gardens and parks after a few weeks of near silence. Starlings have been massing in my local south-east London supermarket car park – in a slightly Hitchcockian fashion – before finally mustering a respectable murmuration. I found it mesmerising, but fellow shoppers seemed not to notice.

The same week, on a warm mid-September day, a trip to Dungeness in south-east Kent, produced the wow factor of a vast flock of lapwings, climbing, turning and swooping, flashing black, white, silver and purple in the bright sunlight. Something is afoot.

The torpor of late August, when so many birds – freed from having to mark territories – seem to skulk silently in trees and thickets, has passed; now there are frenetic and bold displays and much gathering of the clans. Some, like the lapwings, are coming together for winter from their dispersed UK and continental breeding sites; others are heading off to sub-Saharan Africa on the tail of swifts who left more than a month ago, and then there are species that just want to shift a few miles, not always for reasons understood by ornithologists.

I first saw the change at the beginning of September, on the North Downs near Sevenoaks. Plaintive mews from high above alerted me to buzzards, a raptor now quite common in south-east England (having for many years been absent). I’ve only ever seen one or two at a time but staring up I could see 10 of these majestic birds of prey stacked up, soaring, occasionally play-fighting, gliding ever higher in tight circles. Later I learned from birding experts online that young buzzards often cluster along with their parents and neighbouring broods before dispersing to fresh territories that can be hundreds of miles away. 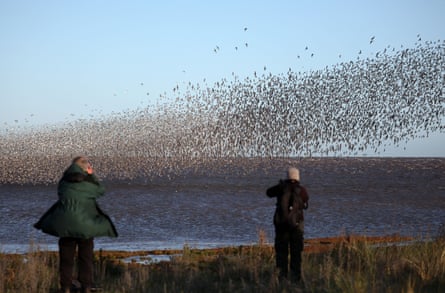 Knots, oystercatchers and pink-footed geese are among the thousands of birds arriving at Snettisham to feed on the abundance of food on the mudflats. Photograph: Paul Marriott/Rex

The experience told me it’s the time to get out on foot or bike to witness things that can only be seen at this time of year. A perusal of Chris Packham’s Self Isolating Bird Club Facebook page revealed unusual happenings: swarms of house martins in Hampshire, wheatears flitting through gardens as they summon the strength to set off to central Africa. Another site detailed one man’s joy as around 90 pink-footed geese interrupted his work while they transited from summer breeding grounds in the Arctic en route to their favoured UK autumn and winter coastal locations.

Back at Dungeness, below the lapwings, a cyclone of swallows was developing over coastal pasture. They were feasting on flying insects in preparation for their journey to South Africa. Until 108 years ago swallows’ whereabouts in autumn and winter was something of a mystery – as recently as the 18th century many observers, even great naturalists such as Gilbert White, hypothesised that they hibernated in mud by ponds. But on 27 December 1912 a letter was received by bird ring supplier Harry Witherby from a hotelier in Natal, South Africa, confirming the amazing truth. It revealed that a swallow found trapped in a nearby farmhouse had a ring on it marked Witherby, High Holborn, London. The bird had actually been ringed by John Masefield in Cheadle, Staffordshire, on 6 May 1911. Our knowledge of bird behaviour had taken a huge leap. 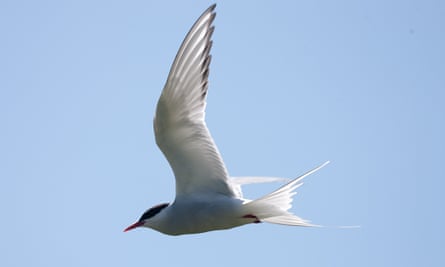 An Arctic tern, ‘one of the UK’s most elegant summer seabird visitors’. Photograph: Andy Mason

Even more dramatic was the later discovery that Arctic terns – one of the UK’s most elegant summer seabird visitors – dash off to the extremes of the southern hemisphere in autumn. In December 1966 a tern was found in New South Wales that had been ringed in Anglesey six months earlier. More recent studies, including one by BBC Springwatch with Newcastle university, showed that terns nesting on the Farne Islands off the coast of Northumberland were setting off each autumn on a zigzagging route of more than 59,000 miles that took in West Africa and the Indian Ocean before arriving off Antarctica.

The passage of migrants is still shrouded in mystery, however. Technology has given us the means to locate them but not necessarily tell us about the reasons for their route choices. The British Trust for Ornithology has been tracking a cuckoo they call Carlton II on its annual migration to central Africa for the past couple of years. Earlier this month, its solar-powered tracker revealed that the cuckoo had decided to take in a swathe of the Atlantic Ocean 100 miles off Morocco on its route from Suffolk to Mauritania.

Humans, however, have played a role in bird route choices, with railways, canals and roads offering geographic locators. The BTO says it’s noticed ospreys following the A1 on the start of their epic journey to central Africa.

But at the moment you’re most likely to see small birds on the move. The period from mid-September to mid-October sees finches setting off on mysterious travels within the UK and to other parts of Europe. “Siskins, in particular, are popping into gardens right now,” BTO ornithologist Paul Stancliffe says, “and chaffinches will be following soon after, then later, goldfinches and bramblings.” 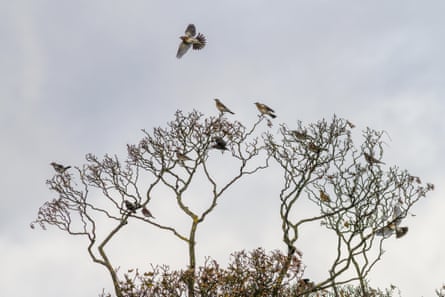 Flock of Fieldfares and redwings, having arrived on migration, near Ilkley, West Yorkshire. Photograph: Rebecca Cole/Alamy

He explains that males of many of these species remain closer to their breeding grounds for territorial reasons, and so a larger proportion of birds on the move tend to be female. “Males are often desperate to get back as soon as weather and food sources allow to establish territory, so don’t feel the urge to travel so far in the autumn,” he says, adding that a cold snap on the continent or a failure of the berry crop in, say, Scandinavia, can see thousands of birds of both genders on the move.

One of the most dramatic “invasions” is set to occur in the next two weeks with redwings arriving in the UK from Scandinavia and western Russia, says Stancliffe. Again, food and weather will play their part in the exact timing but the advance guard have already made landfall in the Shetland and Orkney islands. A beautiful small thrush easy to identify from its eye-stripe, the flocks often traverse the North Sea by night and descend on UK hedgerows in their thousand to devour berries.

Redwings aren’t Stancliffe’s favourite though. His unlikely choice, the bird he always looks out for at this time of year, is the humble wood pigeon. “In 1985, on Hengistbury Head, Dorset, I saw at least 50,000 wood pigeons heading south – it took them nearly three hours to pass over.”

Where they go exactly is still something of a mystery but the cork oak forests of Portugal and Spain and their acorns seem fertile territory for many. “Light winds and a clear day helps … but you never know when your luck will be in.”

10 of the best places to see autumn migrations 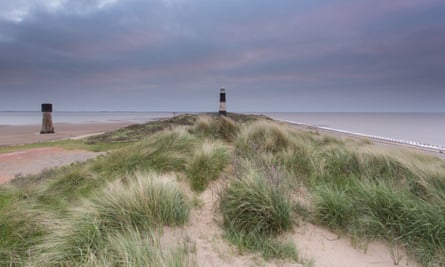 Paul Stancliffe says peninsulas and headlands jutting into the sea are among the best places, as birds are effectively funnelled. Inland, hill ridges, from the Pennines to the Chilterns have proven to be excellent territory for spectacular bird spotting. But essentially, spectacular movements of birds can be seen all over the country, including towns and cities. However, if we are to narrow it down, here are some options that should improve your chances.

Spurn Point, East Yorkshire
This narrow thread of land – actually classed as a sand tidal island – facing Grimsby is home to a bird observatory that records prodigious quantities of migrants and rarities. An easterly wind will bring thousands of birds passing through. 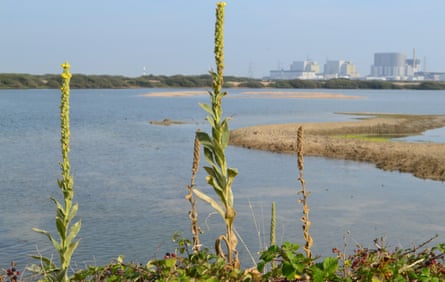 A view across one of the main lakes at Dungeness’s RSPB reserve. Photograph: Adam McCulloch

Given its lighthouses, miniature railway, nuclear power station, curious shacks and shingle, the peninsula is a unique spot even without the vast array of bird and insect life that uses it to launch off over the English Channel. A bird observatory and excellent RSPB reserve keep track of the comings and goings. 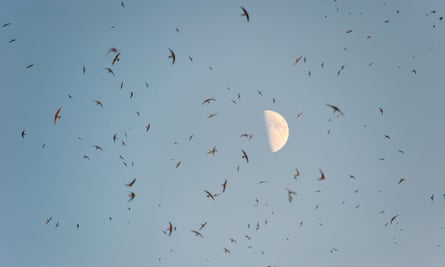 A huge flock of swifts under a bright moon. Photograph: Nick Moore/Alamy

Some 6,000 housemartins were recorded in one last week at Portland Bill Obsevatory, along with 3,000 swallows and 500 meadow pipits. A lofty narrow promontory with Grade II-listed lighthouse and an atmosphere all of its own make this a special spot.

Land’s End, Cornwall
Stancliffe says he likes to visit the Cornish peninsula to view the passage of skylarks heading to Ireland. Other birds seen here in numbers each autumn include meadow pipits, lesser black-backed gulls and sandwich terns. Temporary residents rocking up can include Lapland and snow buntings, Richard’s pipits and American golden plovers.

North Ronaldsay, Orkneys
This island is a bit remote, but it warrants inclusion because not only is it a stunning, other-worldly location, but September is its hottest month bird-wise. All the finches and thrushes pass through in this month and the seabird migration reaches its climax. In addition, waders and a wide roll call of raptors make their presence felt at this time. 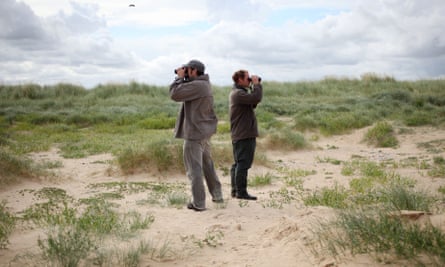 Another beautiful but somewhat bleak coastal location that not only attracts migrant birds in great number but plenty of twitchers desperate to add to their lists of rarities. The point itself – part of the Blakeney national nature reserve – has a breeding tern colony as well as its famous seal colony, but the surrounding vegetation harbours an array of migrants and vagrants such as brown shrikes, flycatchers, icterine warblers, wrynecks and so on.

Lough Foyle, County Derry
The RSPB-maintained mud and sandflats at this estuary reserve host large populations of pale-bellied brent geese and whooper swans as they return from their breeding grounds in Greenland and Iceland respectively. Flocks of more than 1,000 geese and 3,000 golden plover waders are regularly recorded here – an astounding sight. 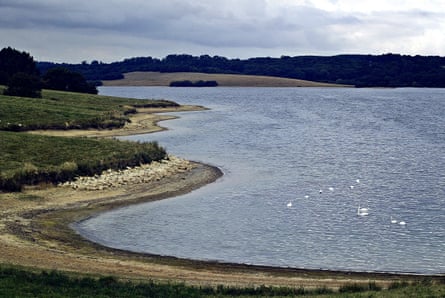 Passage waders, ducks and geese are the stars during autumn at this huge inland lake, with 21 species of wader once recorded in a single day, and other regular migrants include glossy ibis, terns and wheatears. Up to 70 species breed over summer, including ospreys, some of which are about to set off on their long journeys south.

South Downs national park
Experienced Surrey-based birder Steve Gale is a specialist in North Downs migrations but admits that the South Downs have the edge when it comes to spotting at migration times. He says this is because the South Downs “have steep slopes on both sides and a narrower ridge so the birds are funnelled into a smaller space”. His recent sightings at Chanctonbury Ring, Cissbury Ring and Chantry Hill include 700 housemartins, 2,000 linnets, a rich haul of flycatchers, wheatears, yellowhammers and corn buntings.

St Davids peninsula, Pembrokeshire
The whole of the Pembrokeshire Coast natural park is superb birdwatching territory with lots of varied terrain from ancient woodland to sea cliffs and river valleys. Being a headland, St Davids is used by birds transiting to and from Ireland and by visitors from Arctic regions. Wrynecks, buff-breasted sandpipers and ospreys also drop by at this time of year.

Into the night: why walking in the dark is good for the soul