In Switzerland, the best time of year is winter. Sure, the Swiss love hiking alongside springtime wildflowers or swimming in one of their country’s 1,500 lakes in summer. But it’s when the snow falls that Swiss people seem the most grateful and proud of their stunning Alpine surroundings. Not only is world-class skiing always just a short drive away, but winter is the best excuse to gather friends in a cozy, wood-walled chalet to sip some of the country’s little-known and excellent white wines and savor the coziest food in Europe. 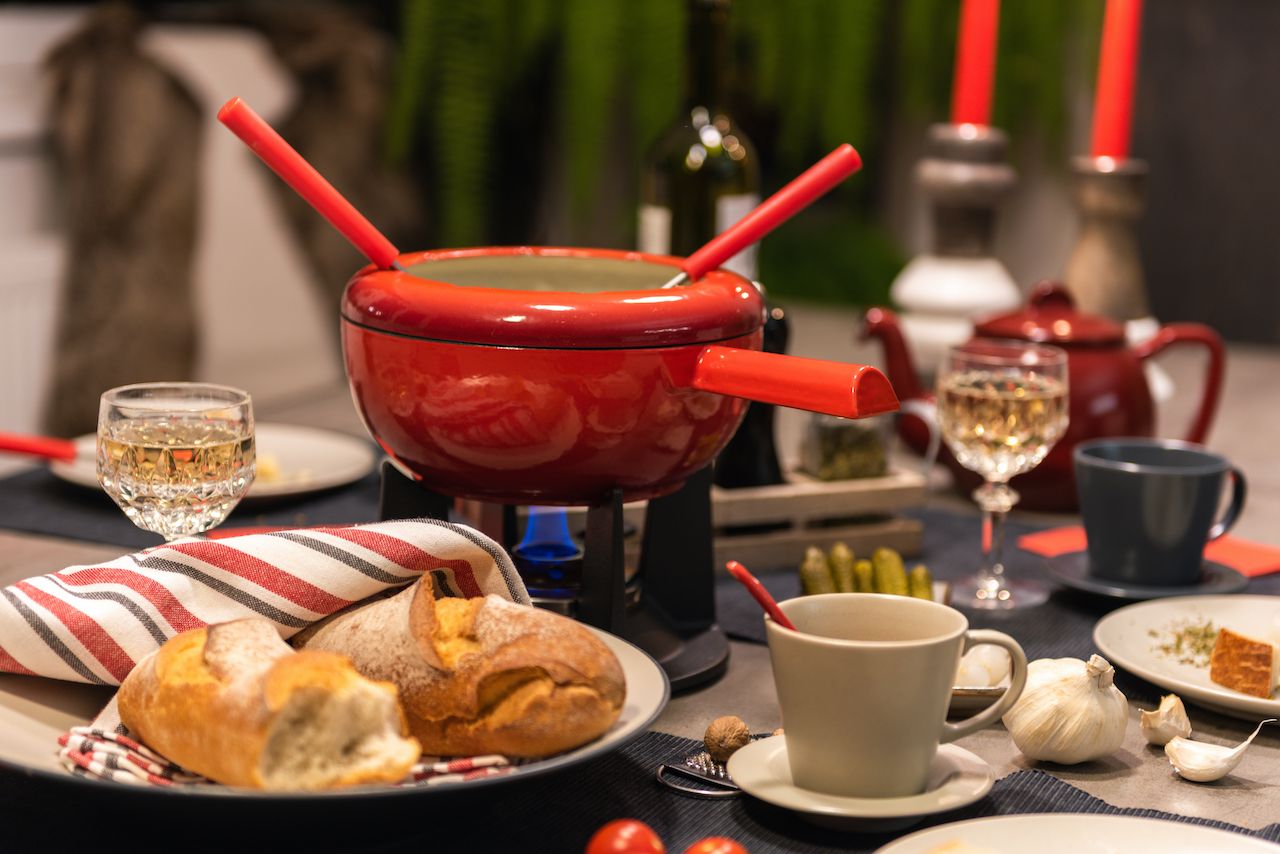 Fondue may be the quintessential Swiss food. Come November, seasonal fondue restaurants open in the country’s forests and cities, quickly booking up through February. When the Swiss talk of fondue, they mean cheese fondue — the rich, irresistible dish made mostly or partly with Gruyere, which is a nutty, deeply flavored cheese from the town of Gruyere near the Charmey Valley. Many restaurants offer a choice between all Gruyere or a blend with a milder cheese like Emmental or Vacherin Fribourgeois.

Most typically, fondue is served in a cherry-red, enameled cast-iron pot, although any colored pot is of course fine. The bread for swirling into the cheese is always cut to leave some crust, so it’s easier to pierce and it stays on the fondue fork. The fondue is washed down with dry white wine, typically made with the Chasselas wine grape, which is Switzerland’s oldest grape — and likely the same type of wine with which the fondue was made. Alternatively, you could sip kirsch, a cherry liquor that is also an ingredient in the fondue itself. And we do mean sip it, as the stuff is up to 100 proof.

Last winter, we watched a table of a dozen young men ordering pot after pot of fondue and plenty of kirsch. It being polite Switzerland, they never got too loud. But watching them stumble to the door at the end of the night was telltale. It must be said, though, that they had the right idea. While most fondue restaurants’ cozy surroundings and dim lighting could make for a romantic dinner for two, fondue is best savored as a seasonal dish shared with family and friends. 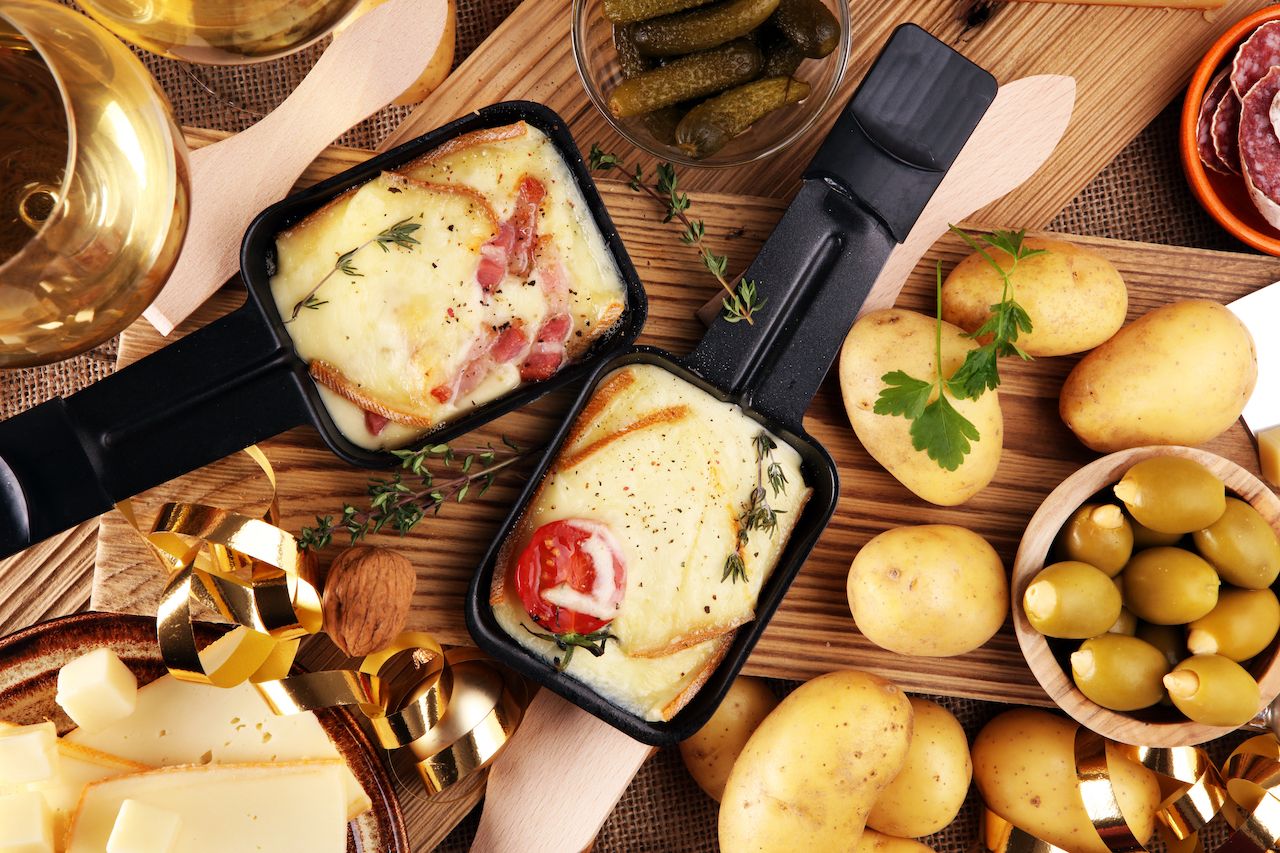 If fondue isn’t wintery and cozy enough, there’s raclette. The most impressive way to enjoy it is at a mountaintop restaurant where a half-slab of a huge wheel of raclette cheese is heated by a roaring fire and the melted cheese closest to the flames is slowly scraped off. More commonly for vendors of raclette — such as those at Swiss Christmas markets — is a special raclette wheel holder that produces its own heat to melt the cheese.

A much simpler, and more communal option, is the tabletop raclette cooker. The double-decker device contains a grill on top, upon which you can sear your choice of meats or vegetables. But the grill’s main purpose is to heat the cheese that you place on little paddles beneath it. Were you to make raclette at home, as Swiss people do regularly, you’d have one of these tabletops devices of your own and would buy raclette cheese pre-sliced into flat, paddle-ready squats from your local grocery store.

The melted raclette is poured over just-boiled baby potatoes. You can take a slice of the cheese-drizzled potato and dip it into a spot of freshly ground black pepper or a paprika-rich spice mix on your plate. Raclette is typically served with small pickled onions, cucumbers, or another tart vegetable. The acid is a perfect counterpoint to the rich raclette cheese. Like fondue, the communal nature of eating raclette makes it that much more special during the winter season. 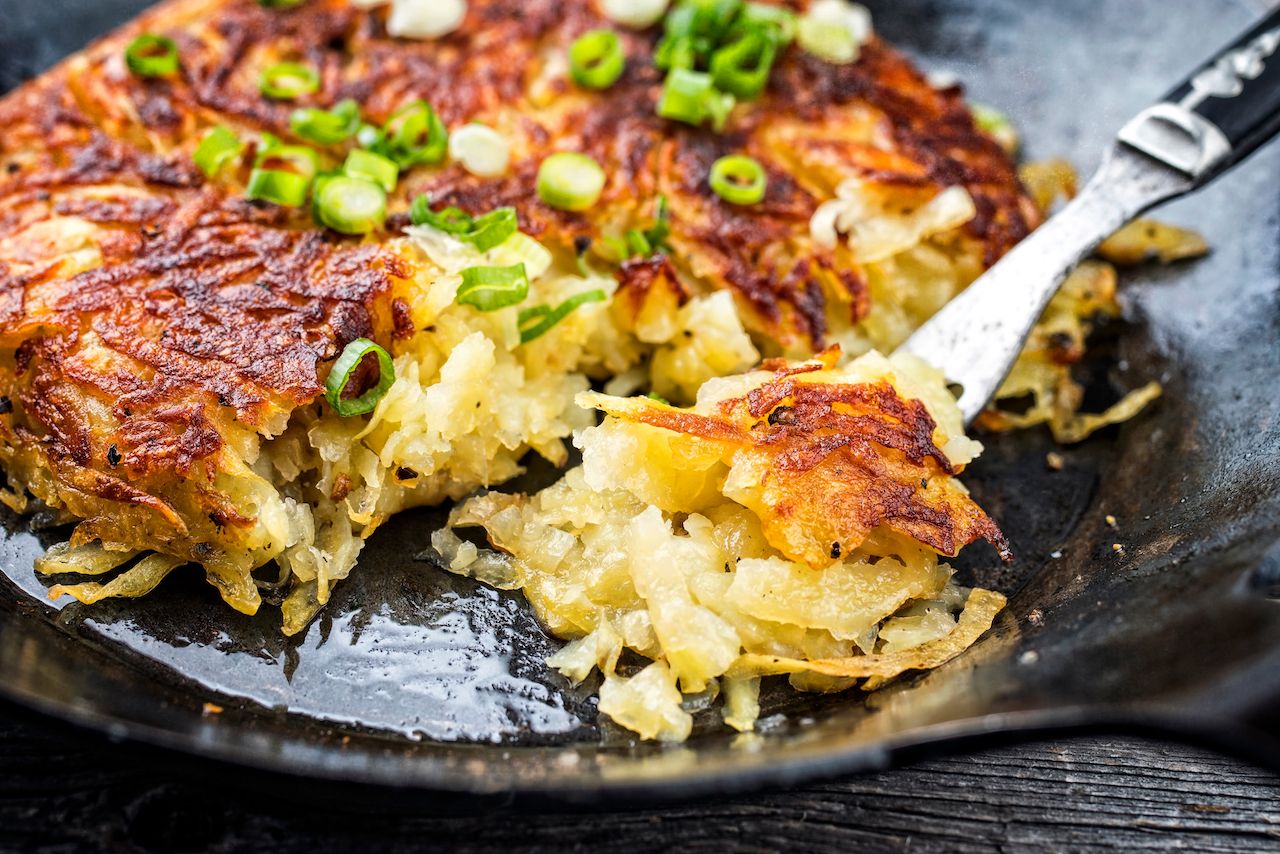 To make rösti, potatoes are grated and then cooked in butter or oil. Rösti can be cooked in a big pan and sliced like a Spanish tortilla or served in smaller portions similar to latkes. A great way to enjoy rösti is on your own ceramic plate with a fried egg on top. Meat lovers might prefer it served with sausage.

Perhaps because of its association as the historic breakfast food for farmers in some German-speaking areas, this hearty food is not much eaten in the French-speaking parts of the country. This explains the German expression “Röstigraben” and French term “rideau de rösti,” which mean “rösti trench” and “rösti curtain,” respectively. Both terms refer to the cultural dividing line between the German and French regions. Fried potato trench or not, rösti is rich, satisfying, and a perfect way to warm up in winter. 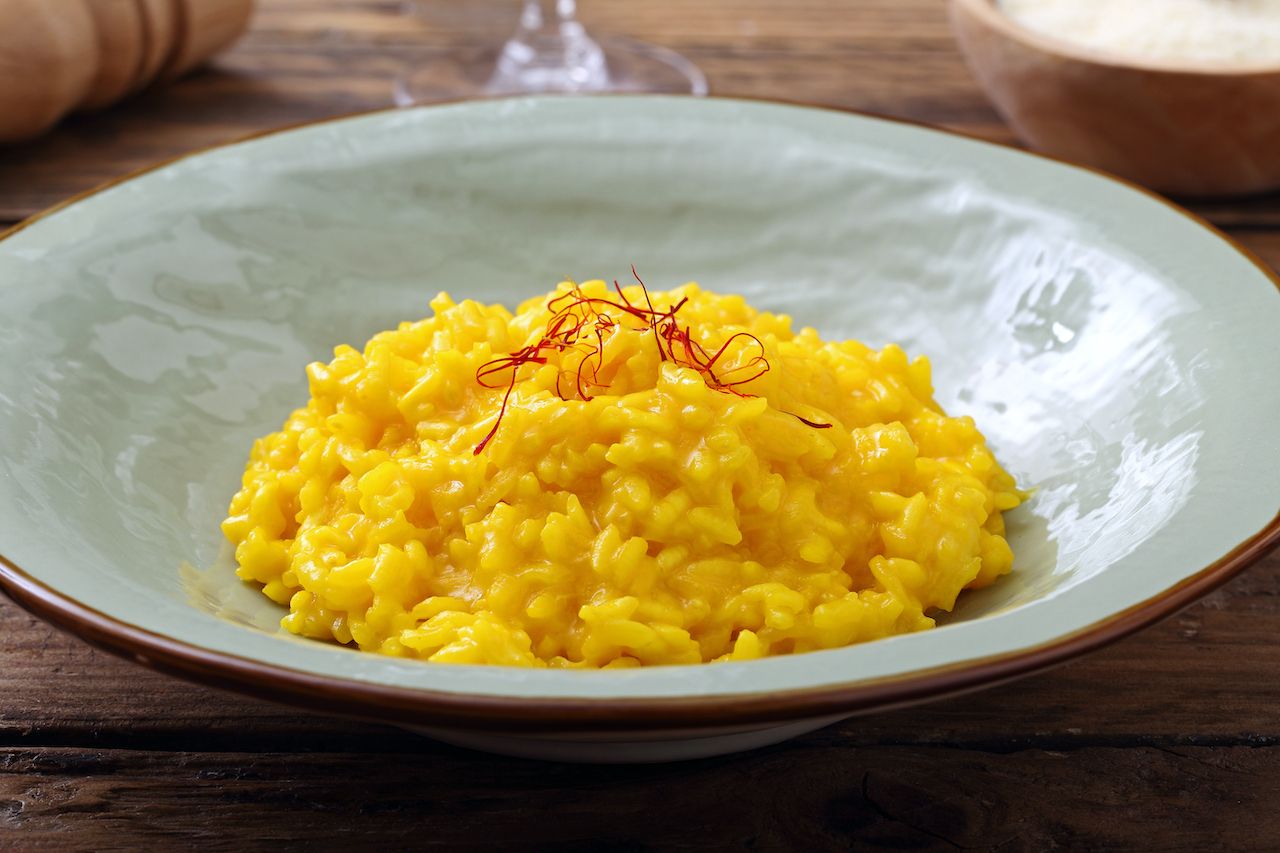 We should point out here that Switzerland also has speakers of Italian and Romansh, a Romance language most similar to Italian. Together, they make up just under 10 percent of the population. They have, however, made their own contribution to Switzerland’s cozy winter foods.

Ticino is the only canton (similar to a small province) in Switzerland where Italian is the official language. A specialty of this region is saffron risotto. It’s prepared much like traditional risotto, although onions are usually cooked in as well. More importantly, it’s flavored with saffron, which gives the risotto a brilliant yellow paella-like hue. Those wanting an extra filling winter dish might like it with luganighe, a local Ticino pork sausage. 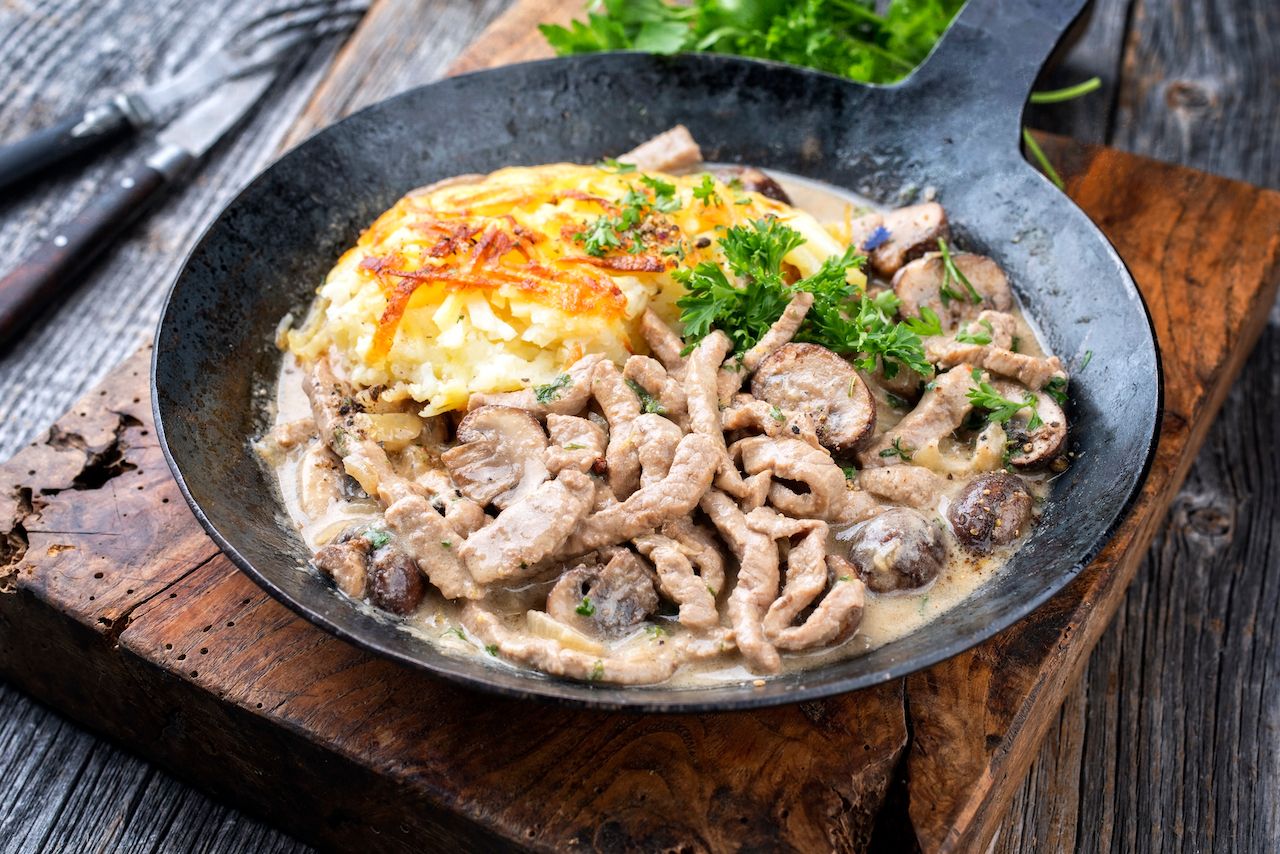 Hailing from the Swiss-German city of Zurich, this dish departs from the cheese and starch theme, but it’s still robust fare suited to cold weather — and is often served with rösti potatoes on the side. It consists of veal sliced thinly and sauteed with onions, mushrooms, white wine, and heavy cream. Parsley is a lovely garnish. Although the name references the place of its origins, Zürcher Geschnetzeltes, or “shredded meat from Zurich,” can be found in other regions of the country as well. 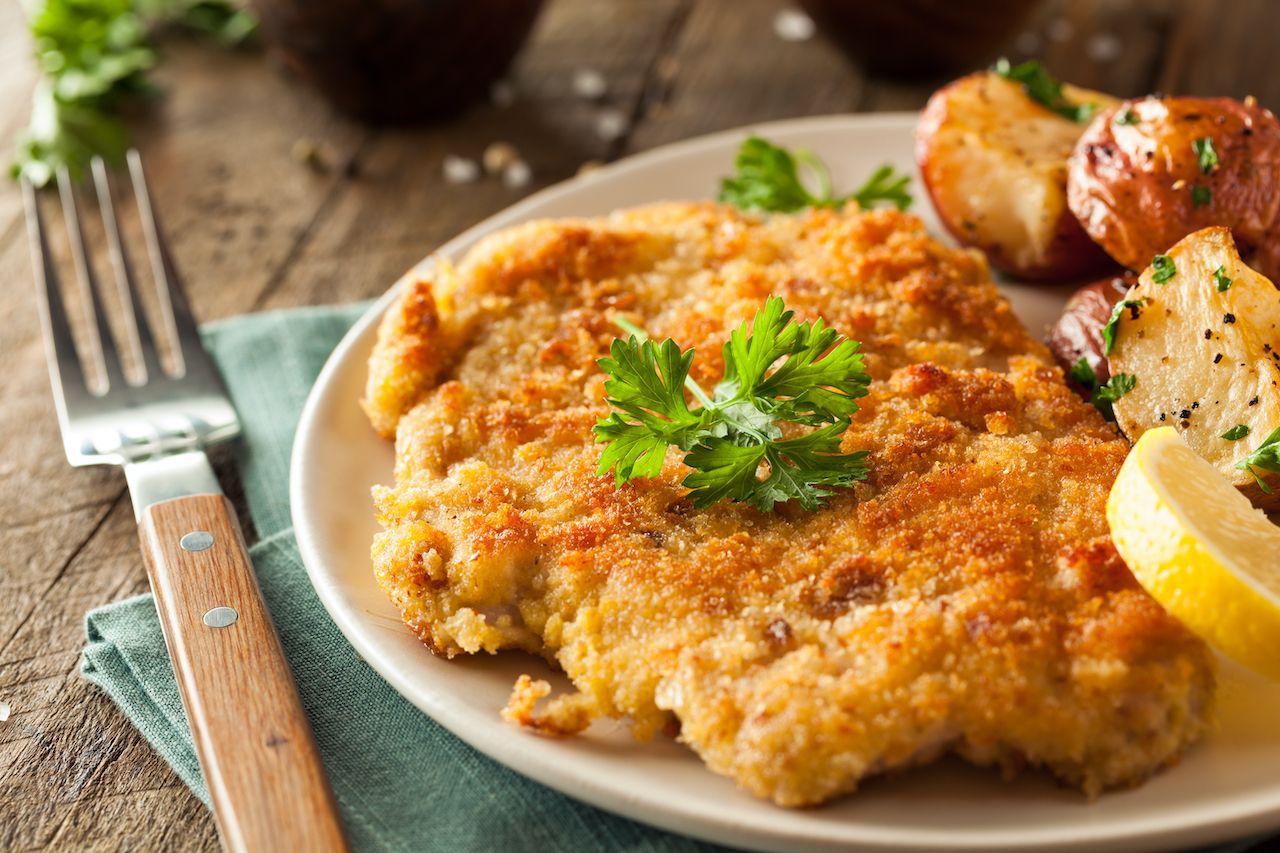 You won’t find wiener schnitzel — thinly sliced veal that’s pounded, breaded, and pan-fried — on any lists of “traditional” Swiss foods. But that is simply because the dish, which means Viennese carved meat, originated next door in Austria. Yet wiener schnitzel is ubiquitous on Swiss menus, and many Swiss will have their favorite restaurant at which to eat it. Often the piece of veal is so big it stretches over the side of the plate, so that the accompanying French fries have to be served separately. Somehow, though, the meat is so thinly sliced and the breading so light and crispy that most who order it manage to eat the whole thing.

Tolkien’s house up for sale

New Mexico hospitals at 102% ICU capacity, and other states are...