Home Lifestyle Travel California said to stay close to home, and that turned out to...

Late last week California urged residents to avoid all nonessential travel outside of a 120-mile radius from where we live. This isn’t really news; as the latest epicenter of the US coronavirus outbreak, California has been under touch-and-go stay-at-home orders since December, with four of the state’s five regions now under indefinite advisory. Yet upon seeing a fixed distance assigned to my travel bubble, this new, quantifiable mandate felt to me like the tightening of a screw with no room left to give.

Naturally, I turned to Google to see just how small my backyard had become.

Loosely outlined, a 120-mile radius from my apartment in San Francisco’s Richmond District stretches north toward Ukiah, encompassing the lower tip of Mendocino State Forest; arcs east around Yuba City; slopes south along the Sierra Nevada, just missing Yosemite; sweeps through the San Joaquin Valley; and loops back toward the coast, cutting across the top half of Pfeiffer Big Sur State Park. The other half of my travel bubble lies over the Pacific Ocean.

Scanning the website I used to map my travel bubble, I noticed a few things: Lake Tahoe is nearly 200 miles away from the city, but Big Sur is closer than I remember. And California is incredible, top to bottom — measuring roughly 1,040 miles north to south and only half that across, with the coast on one side and the Sierra Nevada running two-thirds down the other, eventually giving way to the Mojave Desert. The point is, you’d have a hard time avoiding the Golden State’s seriously stunning wilderness driving 120 miles east or west, no matter the address you start from.

I’d like to say that my initial reaction to California’s new travel advisory was simply, “Good.” Coronavirus cases in the state are surging, and stay-at-home orders have proven integral to stopping the spread. Yet despite having every intention to stay hunkered down, abide by my local mandates, and only participate in outdoor recreation as advised by health officials, being reminded of how many open spaces I can access in just a couple hours felt like the breath of fresh air these back-burner outings also promise.

It’s also a welcome reminder that there’s a whole lotta nature between my front door and the world-class destinations my current travel bubble doesn’t reach — and mostly without the masses.

So, for all my San Francisco neighbors, future travelers to the Bay Area, or anyone curious about the 120-mile radius around one writer’s Richmond District apartment, I present this local’s in-need-of-emergency-outing guide to COVID-19-era NorCal — aka 12 wide-open, refreshing, and relatively crowd-free escapes across the Bay and beyond.

1. Anything on the Bay Area Ridge Trail (but mostly in the East Bay) 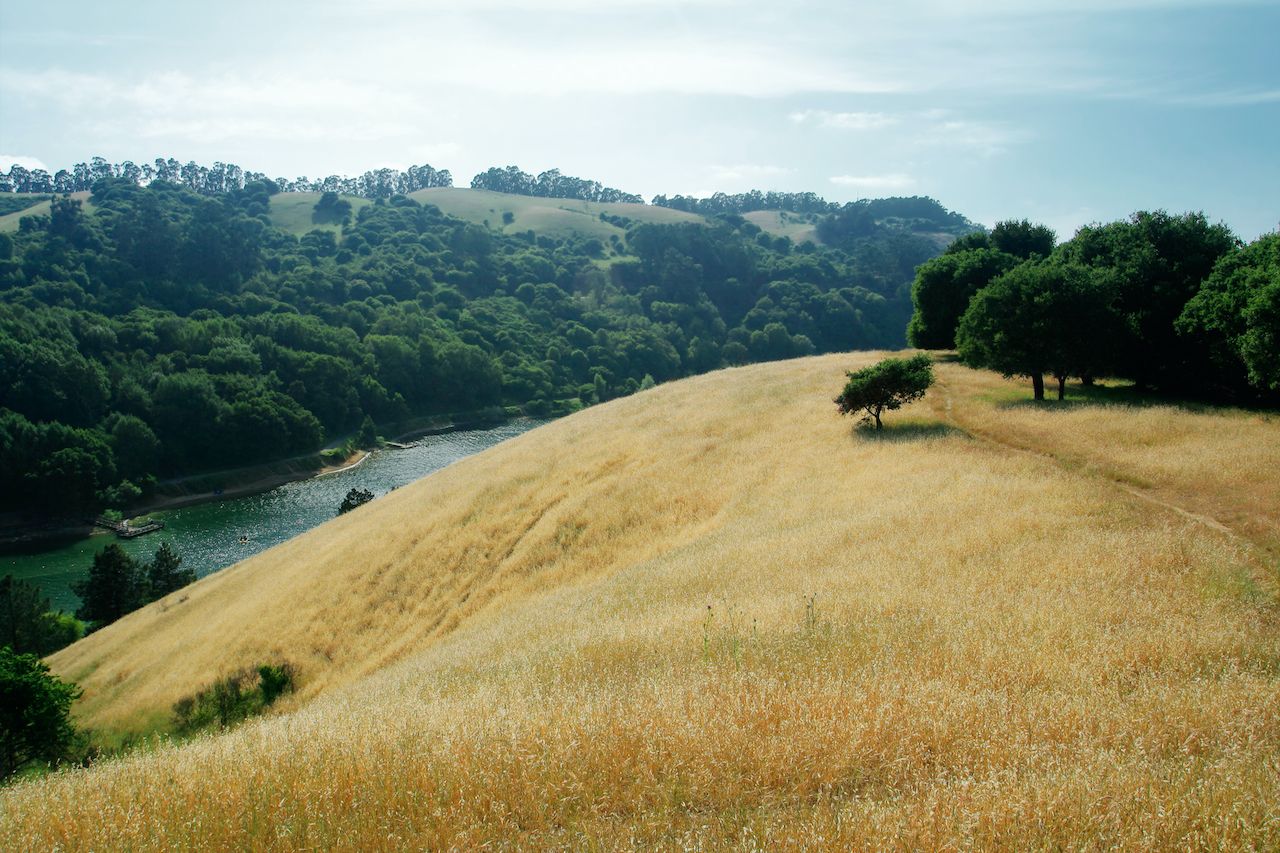 Full disclosure, this is cheating. The Bay Area Ridge Trail is a 550-mile loop connecting public lands across the Bay Area, with 75 individual trail maps detailing some of the best hikes around San Francisco, the Peninsula, and the North, South, and East Bays. The majority of the trail is also open to mountain bikers and even horseback riders.

The trick here is knowing where to stay six feet apart from strangers. One recommendation: Anthony Chabot Regional Park in Oakland. Open spaces in the East Bay get overlooked, in general, although parks like Tilden near downtown Berkeley can draw crowds. Roughly twice the size, Anthony Chabot sprawls across the East Bay from Richmond to Castro Valley, covering 70 miles of mostly intermediate, mostly empty trails.

Up first on my list: the four-mile Goldenrod Loop, Horseshoe, and Brandon Loop. 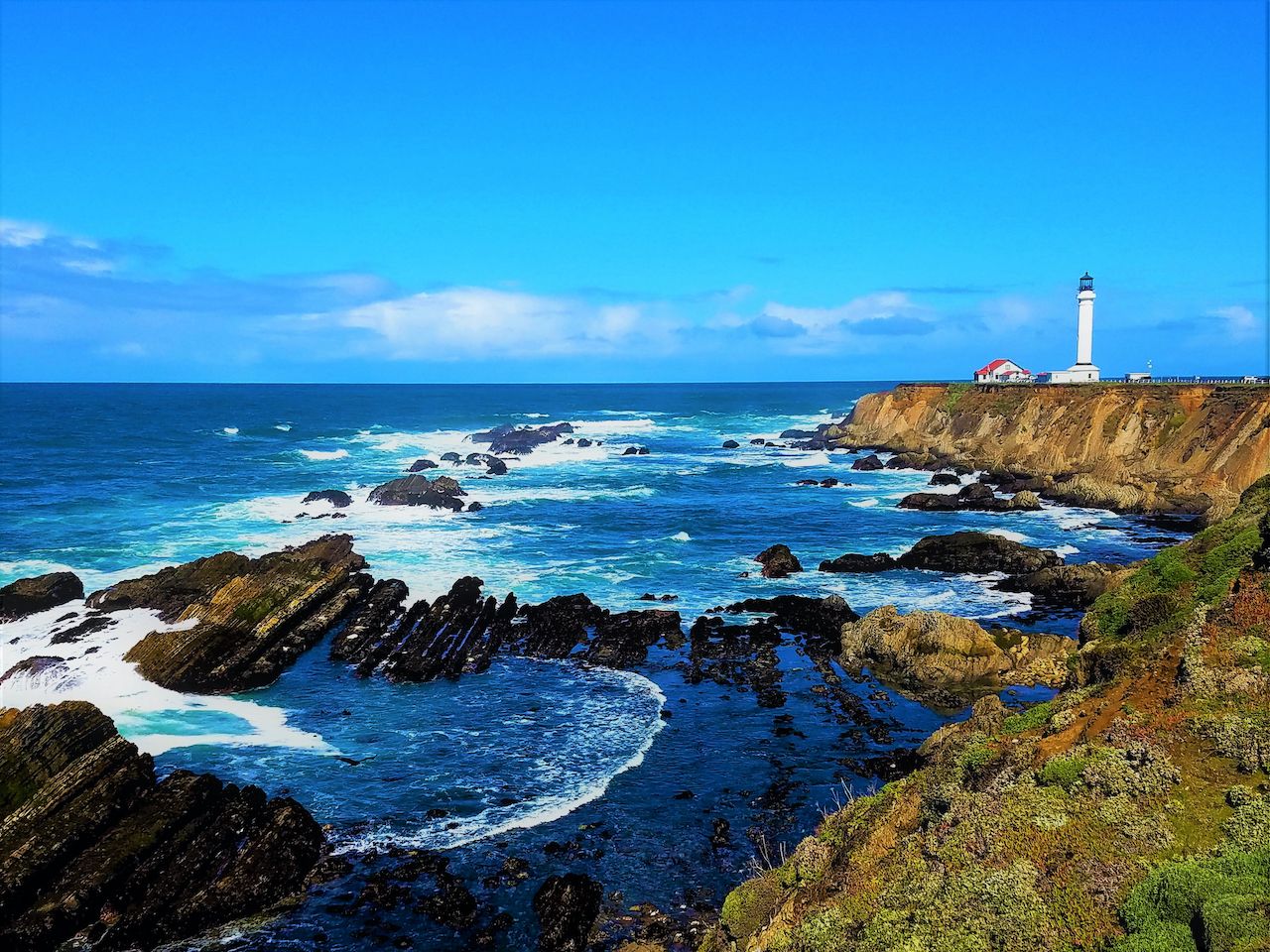 That Humbolt and Mendocino’s Lost Coast is more than twice the distance I’m currently allowed to travel stings, but knowing my northern boundary reaches into the lower part of Mendocino National Forest softens the blow. With nearby attractions like Fort Bragg’s Glass Beach just out of bounds, I’m setting my sights on Point Arena-Stornetta Public Lands, whose two-mile stretch of coast hosts the only on-land section of the California Coastal National Monument.

Bonus: After exploring as many of the 1,600 acres of coastal bluff trails as you can handle, and no doubt snapping a photo of the iconic Point Arena lighthouse, consider driving through seaside Jenner to see what life is like in one of Matador’s coolest towns to visit in 2021.

3. See if the Garden of Eden lives up to its name 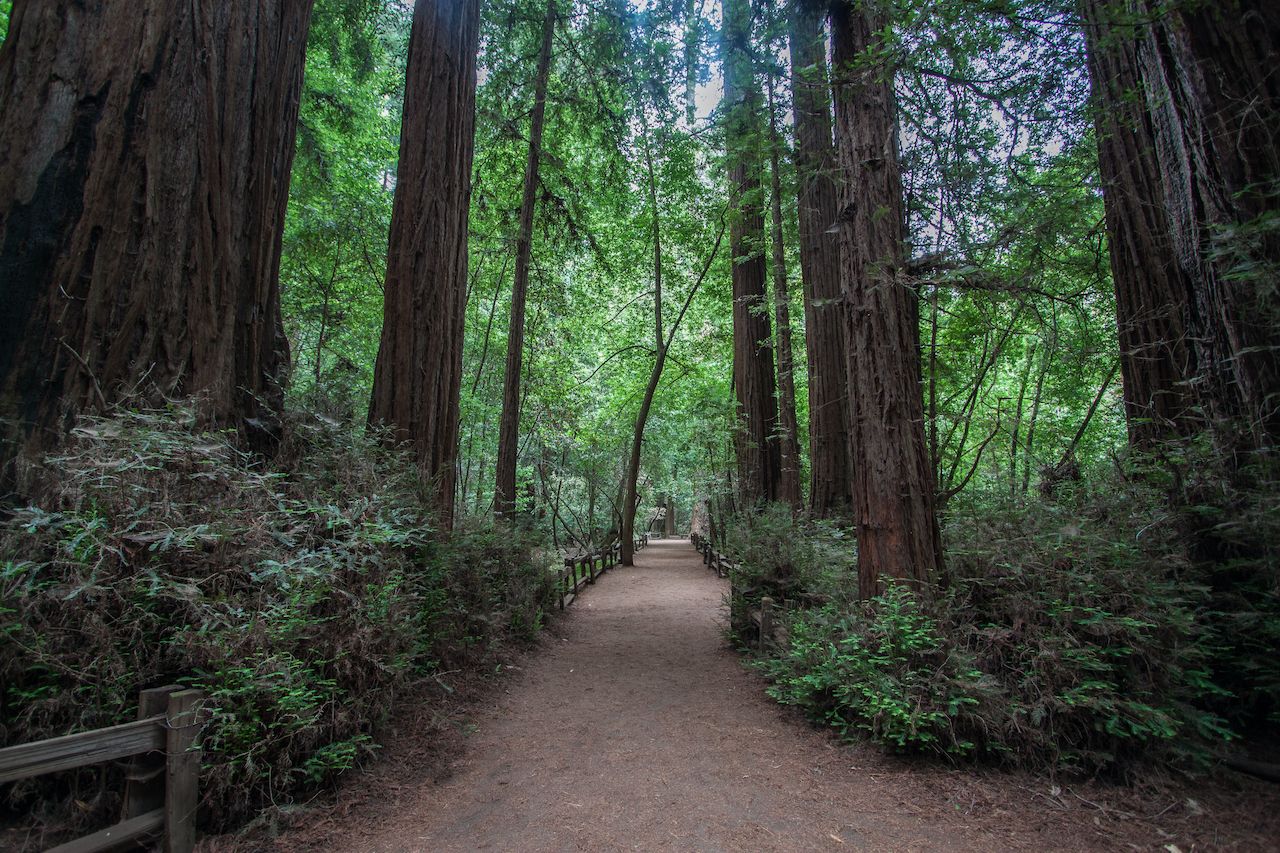 This swimming hole in Santa Cruz’s Cowell Redwoods State Park is not always empty, but the winter chill bodes well for a socially distanced visit. (Just note that a few trails are closed, so check here.) To get to the Garden of Eden, park at the Ox Fire Road Trailhead, or skip the swimming hole altogether in favor of touring the park’s 40 acres of old-growth redwoods, the oldest of which has been growing for around 1,500 years.

4. The state capital and the American River Bike Trail 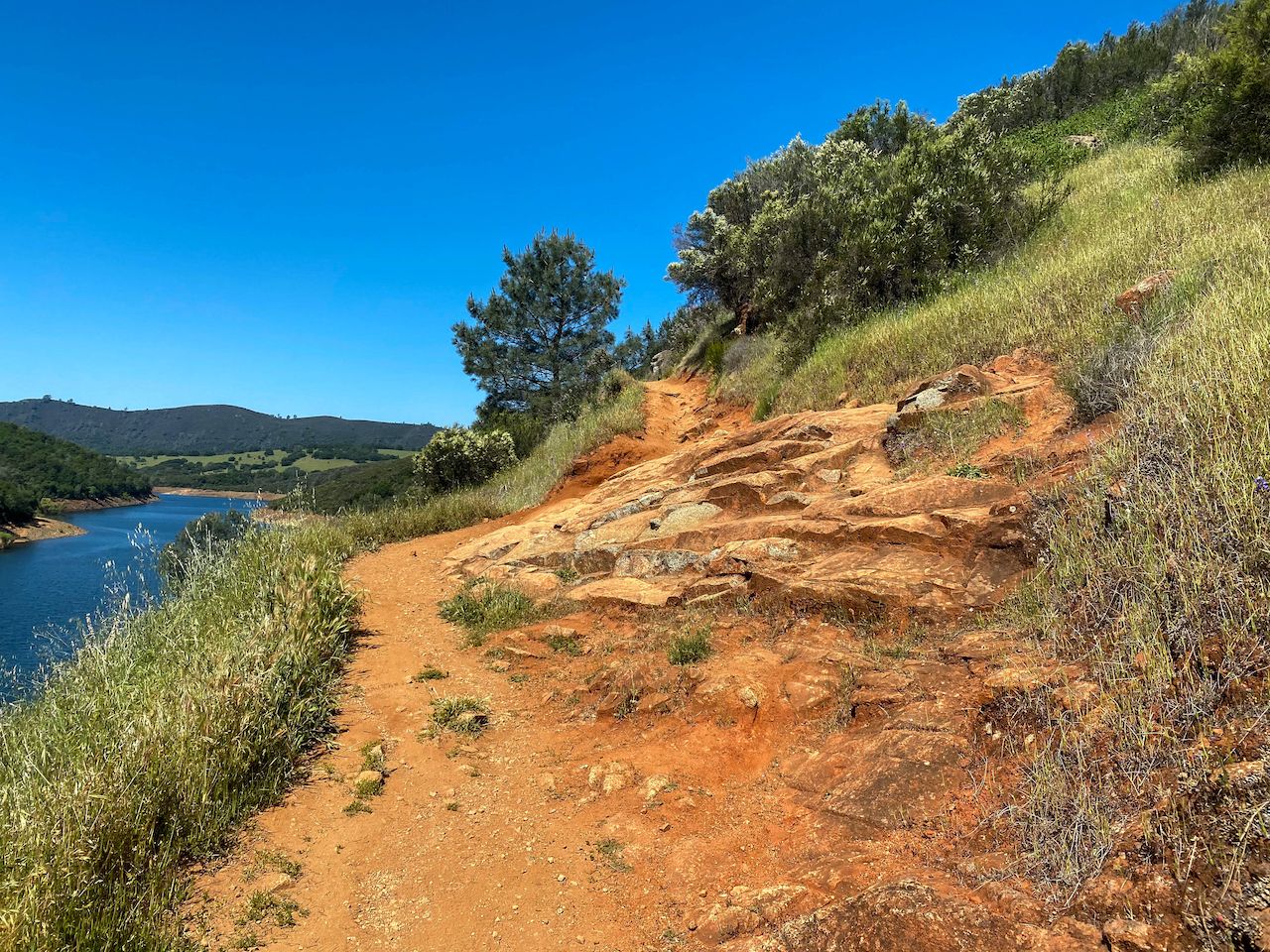 As many times as I’ve driven through Sacramento, I’ve never really seen California’s capital. Until a few months ago, when a friend invited me out for a hike, except for a few endorsements of the growing food and beer scenes I hardly knew anything about visiting Sacramento.

Turns out, it’s a pleasant place for a stroll and an even better spot to mountain bike. In lieu of seeing the state capital from the indoors out, now’s a good time to tour the 32-mile multi-use Jedediah Smith Memorial Trail, or American River Bike Trail, which starts in Sacramento’s Discovery Park and ends near the Folsom Lake State Recreation Area.

A full-on foodie tour of the city will have to wait, but you may want to grab a bite for the car after a long ride. Rumor has it Solomon’s deli has pastrami subs worth stopping for. 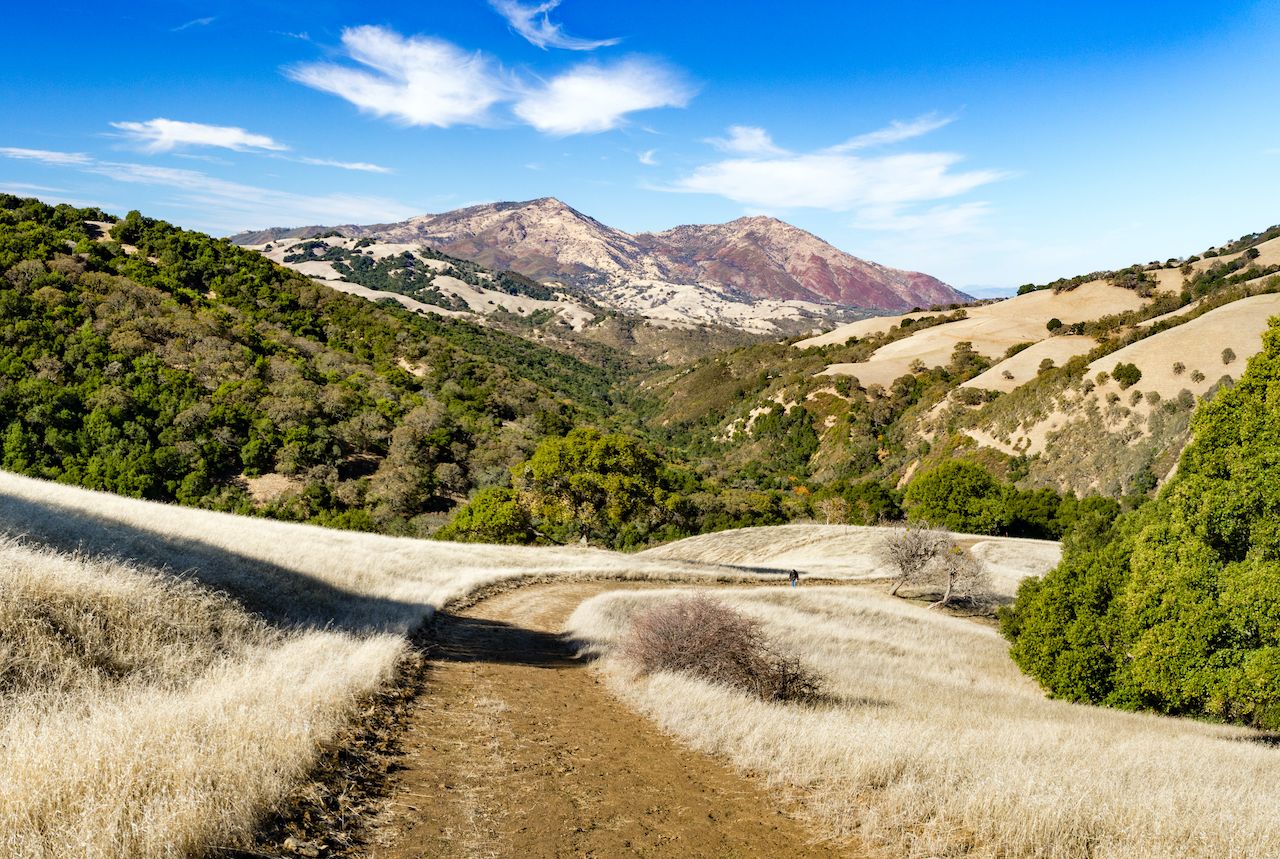 An hour and change east of San Francisco, Mount Diablo is a go-to for elevation gain in the Bay Area, though it still doesn’t clear 4,000 feet. The view from the summit makes it feel taller, though, revealing roughly 8,500 square miles on a clear day. Winter is also an excellent season to see the view, with the best visibility coming after stormy days.

6. Dodging the crowds in West Marin 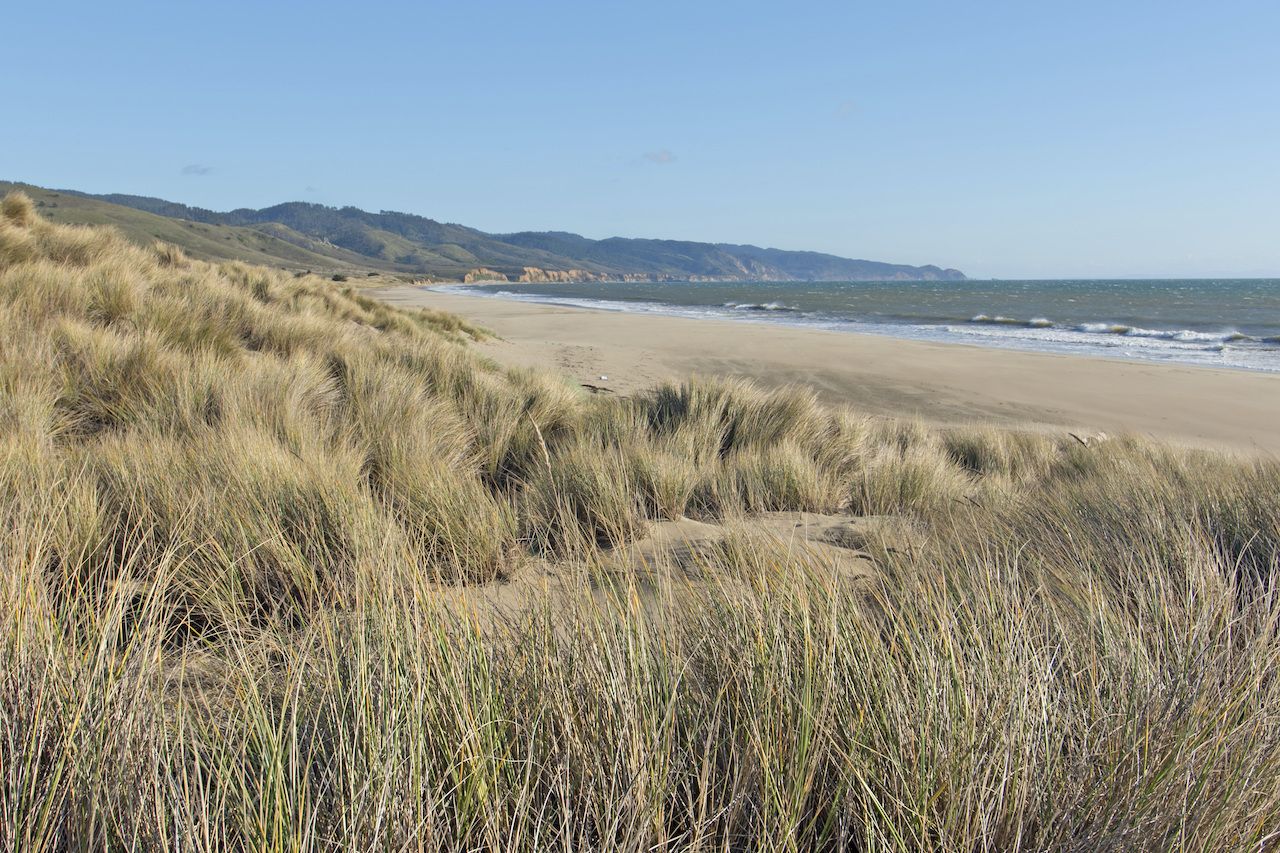 Growing up in Marin County, woodsy, beachy West Marin was always top of the list for a family outing: hiking around Point Reyes, body boarding at Stinson Beach, kayaking to Heart’s Desire in Tomales Bay, then washing it down with some Hog Island oysters.

It’s increasingly difficult to find crowd-free pockets of West Marin, especially on sunny days like the ones we’ve been having this unseasonably warm winter. Thankfully, last I checked, at least two of my old favorites have managed to stay relatively calm: Limantour Beach near Inverness and Mount Barnabe in Samuel P. Taylor Park. Let’s keep those between us.

7. A limestone tunnel in the Sierra foothills

Were I to travel as far east as my 120-mile radius would allow, I might arrive in Calaveras County near the city of Vallecito. There are worse places one could wind up, owing largely to the area’s Natural Bridges Trail. It may be too cold in January to enjoy the swimming hole that makes this a popular summer hike, but you can still enjoy the babble of Coyote Creek and the modest winter traffic. After a couple of miles from the trailhead from Parrotts Ferry Road, when you hit the large limestone cave and pool, you’ve reached Upper Natural Bridge. 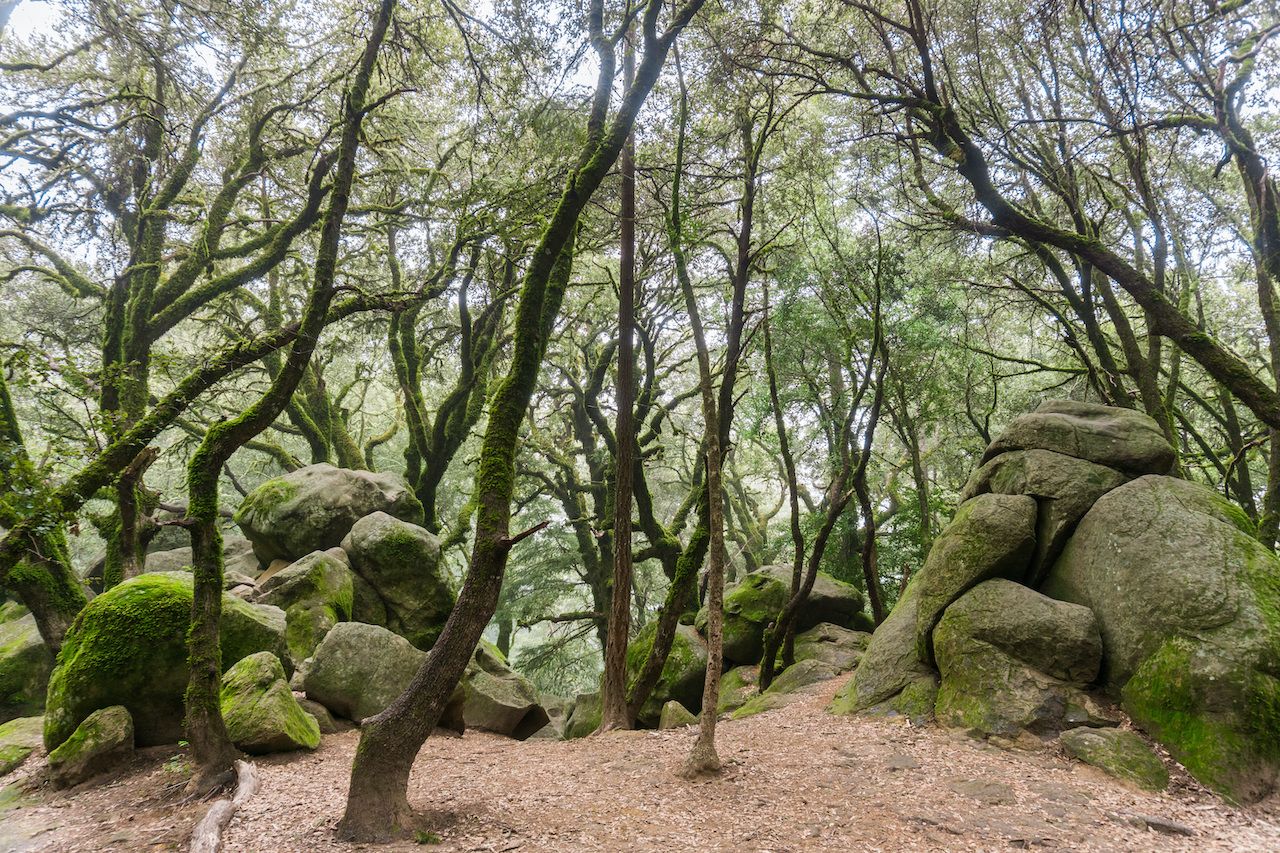 All of a sudden it seems like everyone in the Bay Area rock climbs. I don’t, save the occasional indoor session at Mission Cliffs. I have been bouldering around the Santa Cruz mountains, though, and am overdue for a repeat. An easy day trip from San Francisco, Castle Rock State Park is known for having some of the most frustrating and rewarding bouldering problems in the Bay Area. Two such rites of passage: The Spoon V2 and Tree Problem V4.

Do note, however, that these are sandstone boulders, which means they’re dangerous to climb when wet. As a rule, wait three days after it rains to boulder here.

9. Surf the Peninsula, hike the Midpeninsula 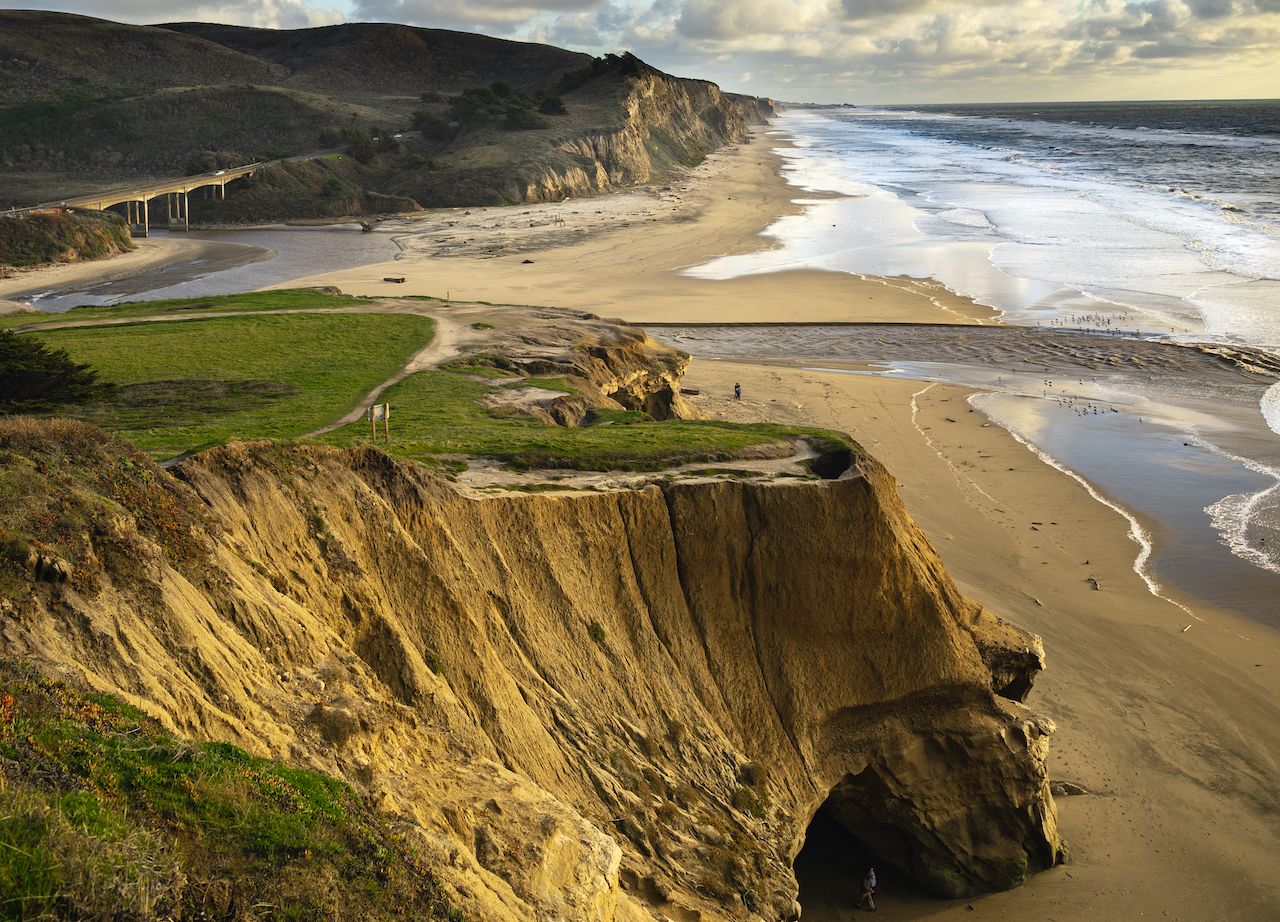 Surfing San Francisco’s peninsula is no hot take: Big-wave riders the world over fly in during winter to surf Mavericks, a monster wave near Pillar Point Harbor north of Half Moon Bay. But many of the beaches here — from Montara, or Mini Mavericks, to San Gregorio — are sweeping expanses that are perfect for social distancing even on busier days, if not actually surfing.

Less common are the nature buffs that extol the Midpeninsula Regional Open Space District below Palo Alto, where 65,000 acres of regional greenbelt feel practically private. Admire the rolling hills, redwood forests, and wetlands on undisturbed walks or bike rides around the preserve — or to really avoid everyone else, look into securing a paragliding permit.

10. In and around Monterey, Carmel, and Big Sur 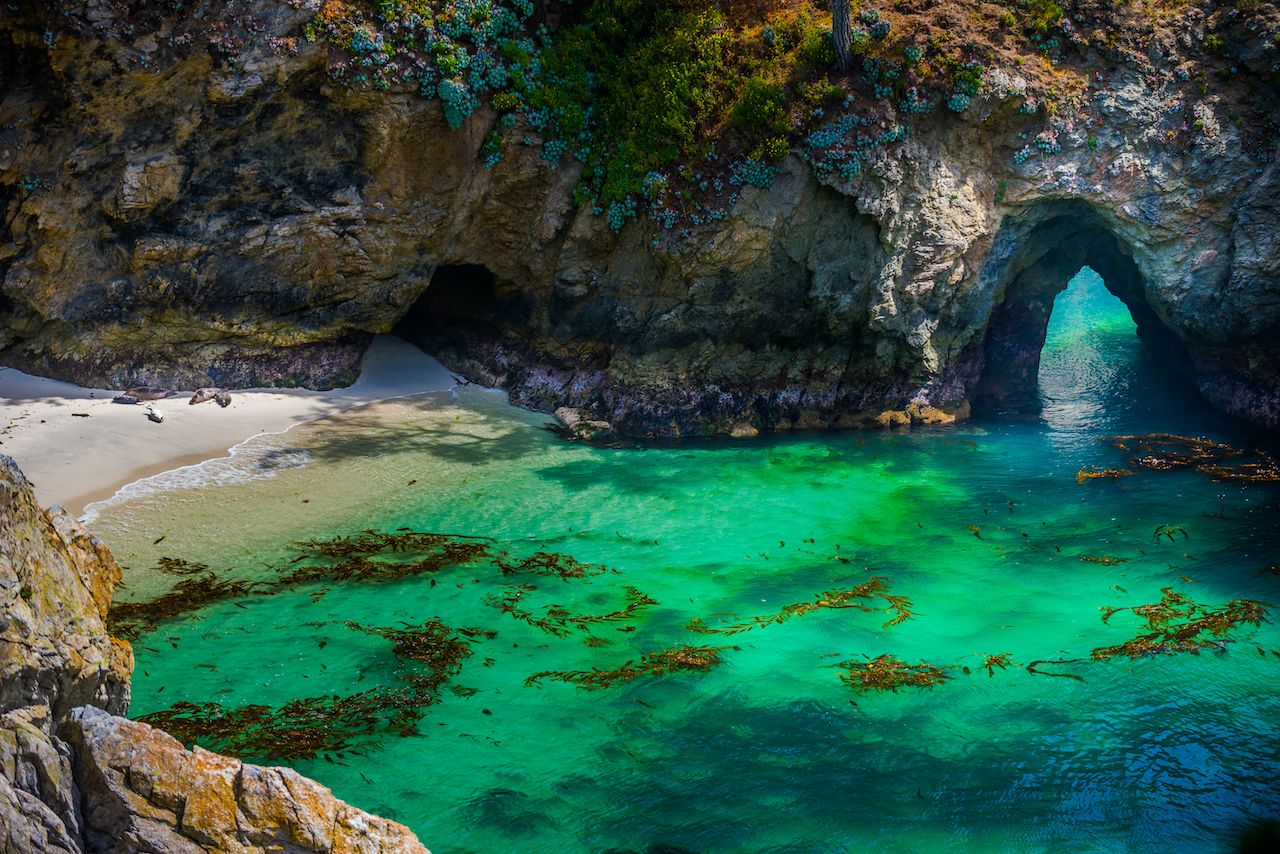 Big Sur is about as far south as my 120-mile radius extends. Zero complaints there, though like the rest of the major attractions in my travel bubble, the challenge here is avoiding others.

A little inland of Monterey, Fort Ord National Monument is a good place to start, with over 85 wild miles to hike. Closer to the coast, and neighboring Carmel, China Cove is a small, sometimes forgotten bay with emerald waters in Point Lobos State Natural Reserve. It may or may not be open depending on the conditions and pupping season for the local harbor seals, but nearby Gibson Beach peers onto the cove as a backup.

Big Sur itself is probably best to avoid if you’re not willing to gamble on crowds, notably hotspots like Bixby Bridge and Pfeiffer Big Sur State Park, one of the country’s best state parks — though winter keeps most visitors at bay. A better option on the Big Sur coast is Andrew Molera State Park, which you’ll mostly share with sea birds, sea lions, sea otters, and migrating whales. 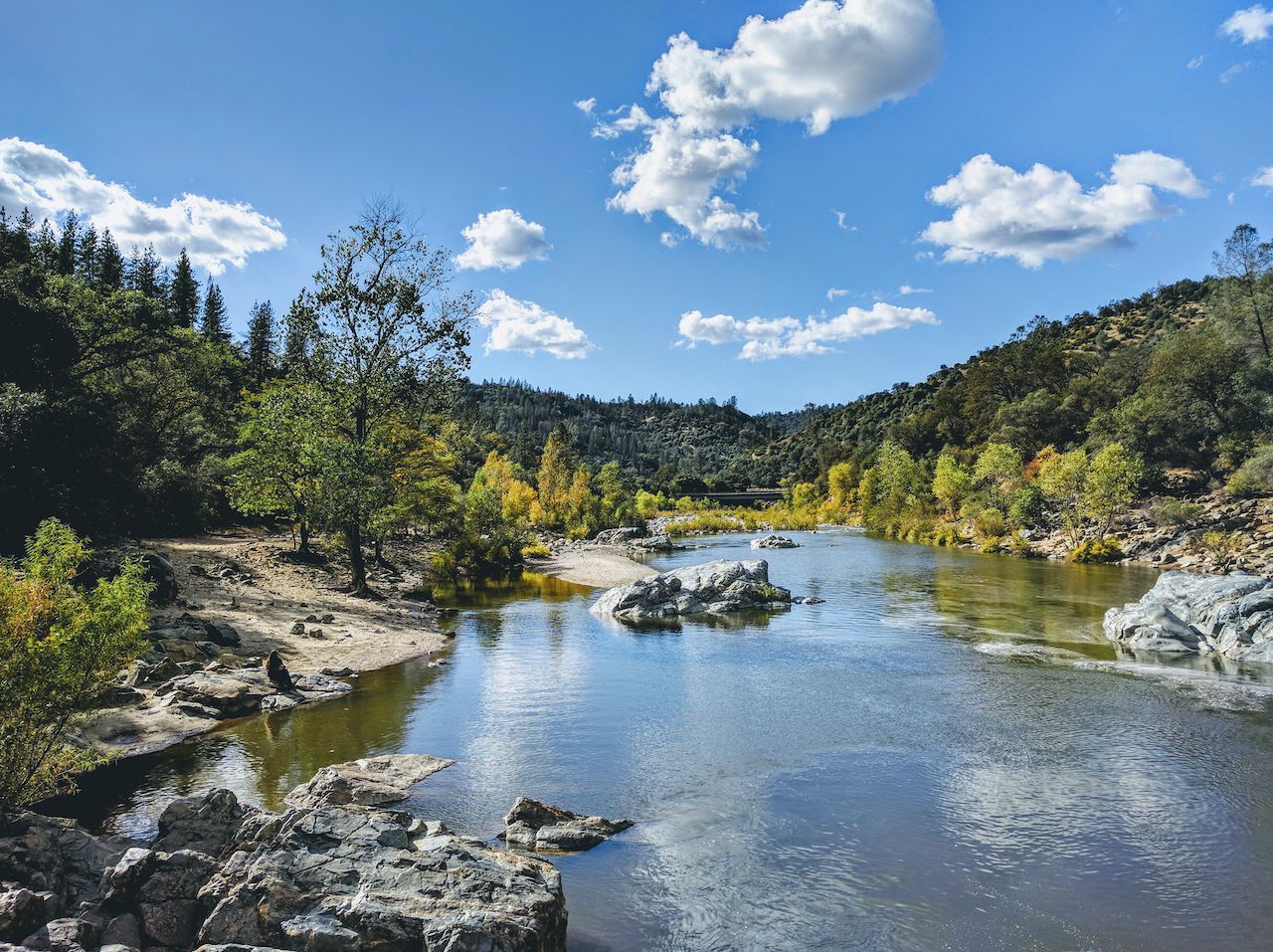 I’m no angler. I’ve only tried fly fishing once, with little success, but it’s still nice knowing I have the Lower Yuba River in my back pocket. Some say it’s the best winter fly fishing anywhere in California, promising abundant rainbow trout alongside steelhead, salmon, and other species.

Even in the likely event that I don’t track down a friend with fly fishing gear to borrow, I’ve never actually been to the Yuba River, having always favored the Russian River for tubing. The North Yuba River’s whitewater is unfortunately out of reach, but the Lower Yuba is supposed to be a nice, calm spot to launch a kayak. And it’s about time I showed this river a little love. 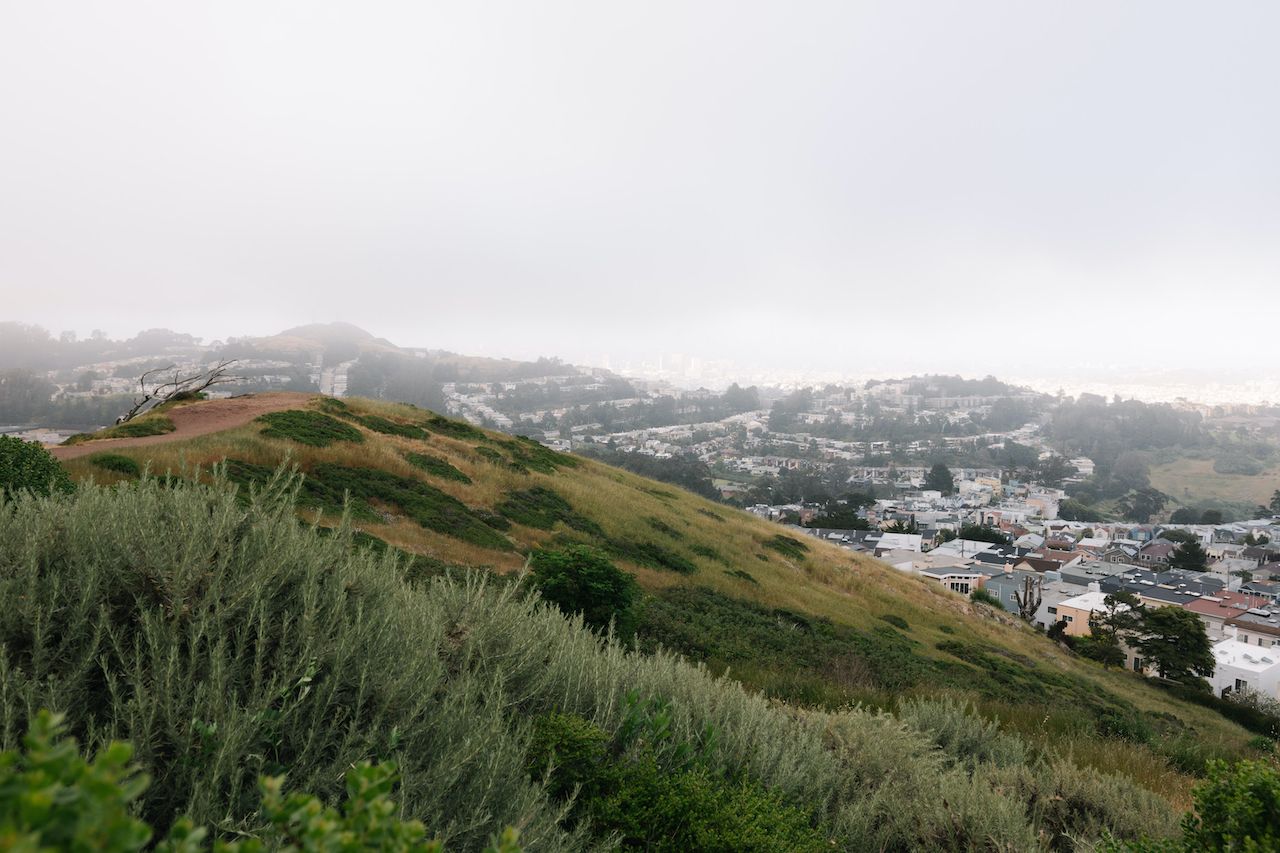 Despite the sweeping views, San Francisco’s open spaces can feel claustrophobic when everyone’s crowded around the same scenes. There’s a lot more to the city’s outdoors than the Presidio and Dolores Park, however. There’s Mount Davidson, the city’s tallest peak, for one. Also the Mount Sutro Open Space Preserve, Bayview, and Billy Goat Hill, complete with socially distanced rope swings. Even the city’s second-largest park, John McLaren, looks empty next to Golden Gate Park. See how it all fits together on the 17-mile Crosstown Trail here.

And while we’re on the subject, I have no idea how Marshall’s Beach, a semi-secret spit of sand between the Golden Gate Bridge and Baker Beach, and Fort Funston, a former military defense and massive stretch of coast on the southern end of the Great Highway, have stayed so people-free. Seriously guys, Ocean Beach is just the tip of the seashore.

Come on in! The exhilarating joy of outdoor ice-bathing

US banning travel from South Africa

What does friluftsliv mean in Norway