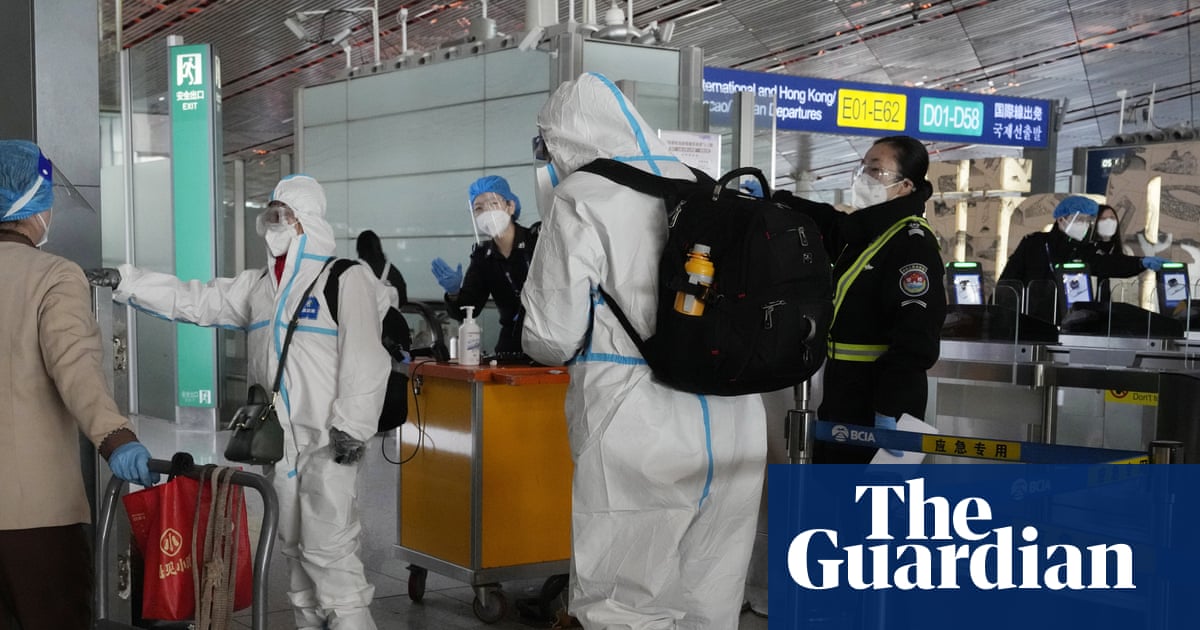 Virologists are watching nervously to see how China’s abrupt decision to drop some of its toughest Covid-19 restrictions, including scrapping quarantine rules for travellers, may affect variants and their global spread as some countries increase precautionary measures.

China’s decision on Monday to drop quarantine for overseas visitors from 8 January has prompted concerns about the potential for new variants to spread beyond China’s borders. Japan and India are among the countries that have introduced measures to prevent an influx of cases.

Prof Dominic Dwyer, an Australian infectious diseases physician, said a lack of transparency about Covid in China was worrying because “we don’t know what variants are circulating in China at the moment … [and] whether those variants are different in terms of their response to vaccination.”

The end of China’s zero-Covid approach comes as case numbers surge, with low vaccination rates especially among elderly people. Ascertaining the spread and severity of Covid is more difficult than ever as Beijing has stopped publishing daily case numbers and ended mass testing.

“They’ve changed very quickly from a zero Covid approach to completely relaxing things, so maybe that’s happened too quickly to keep up,” said Dwyer, who was one of the experts tasked with travelling to Wuhan early in 2021 to investigate the origins of the pandemic in a report for the World Health Organization (WHO).

Official statistics from China reported three new Covid deaths for Tuesday, but the British health data modelling firm Airfinity estimates there are now more than a million cases and more than 5,000 deaths a day.

Airfinity’s head of epidemiology, Dr Louise Blair, said China had also changed the way it recorded Covid-19 deaths to include only those who die from respiratory failure or pneumonia after testing positive.

“This is different to other countries that record deaths within a time frame of a positive test or where Covid-19 is recorded to have attributed to the cause of death,” she said.

Experts say the lack of data is likely to be masking the number and severity of cases, and physicians in China are reporting a massive infection and death surge. Howard Bernstein, a Beijing-based doctor, told Reuters that patients are arriving sicker and in greater numbers, and that the ICU ward where he works at the Beijing United Family Hospital was “full”.

As a result, nearby countries are taking their own measures to prevent a surge of infections. Japan’s prime minister, Fumio Kishida, on Tuesday announced that from 30 December, arrivals who have been in mainland China at any time in the seven days prior will need to provide a negative Covid test on arrival or quarantine for seven days.

Having eased its own border restrictions in October, Japan is also capping the number of arrivals from China. “Concern has been growing in Japan as it is difficult to grasp the detailed situation,” Kishida said as he announced the measures.

Taiwan’s government said on Wednesday that it would test arrivals from China from 1 January and that it would conduct virus sequencing for those who test positive to track new variants.

US officials are also considering whether additional measures are needed to monitor returning travellers. “There are mounting concerns in the international community on the ongoing Covid-19 surges in China and the lack of transparent data, including viral genomic sequence data,” they said.

An Australian government spokesperson said that while the health department “continues to monitor the global situation, travel arrangements for Australians and visitors to the country remain unchanged”. A spokesperson for the British prime minister, Rishi Sunak, said travel restrictions on visitors from China were not being looked at.

The WHO director general, Dr Tedros Adhanom Ghebreyesus, has called on China to share data and conduct relevant studies to help the world understand which Covid variants are circulating. At a briefing on 21 December, Ghebreyesus said: “WHO is very concerned over the evolving situation in China with increasing reports of severe disease.

“In order to make a comprehensive risk assessment of the situation on the ground, WHO needs more detailed information on disease severity, hospital admissions, and requirements for ICU support.”

This data was crucial, Dwyer said, because in countries where Covid-19 is out of control, the sheer number of people infected makes it more likely that there will be a rare event that leads to a changes in the virus, potentially creating a new variant of concern.

Prolonged lockdowns in China also mean a significant proportion of the population have not been infected with newer variants, and the Sinovac and Sinopharm vaccines China has relied on appear less effective than mRNA vaccines used elsewhere.

“That is the environment where you’d expect new variants to appear,” Dwyer said.

“So therefore monitoring people returning from China who are sick is going to be important. We don’t know … whether those variants [in China] are any different to what we’ve seen elsewhere.”

“We’re just still in a gathering data phase, which we will be able to do more of as people travel to China and return,” he said.

In Malaysia, the ministry of health is preparing for a surge by pushing for people to get booster doses and promoting antiviral drugs. In India, international arrivals from China, Japan, South Korea, Hong Kong and Thailand must undergo a mandatory PCR test.

For now, the surge in cases is not deterring those desperate to fly to China to visit loved ones. Dwyer said anyone travelling to China should ensure they were up-to-date with all vaccinations, including booster doses, and that they were also vaccinated against influenza, which is spreading rapidly in China as well.

“You wouldn’t want to be getting ill in China for any reason given the stresses on the health system,” Dwyer said.

“And if people have been in China and come back with an illness, they should get a PCR test done. And if that is positive, that can be sequenced, so we can understand what variants are around.”

Flag, Flame, and Fantastic Views: What You Need To Know Before Visiting Paris’s Arc de Triomphe

In Kashmir, India, Harvesting the World’s Priciest Spice Is a Magical Sight

Lemon Sharks Are Some of the Friendliest Sea Creatures. Here’s Where You Can Dive With Them.