Home Lifestyle Travel How To Visit the World’s Largest Walnut Forest Deep in the Foothills...

Deep in the folds of Central Asia, in the mountains of southwestern Kyrgyzstan lies the world’s largest walnut forest. Travelers usually come to Kyrgyzstan to hike or ride horses with nomads in the highlands, and then continue their Silk Road tour by visiting the oasis cities of Samarkand or Bukhara in Uzbekistan. But a visit to the village of Arslanbob, the location of the world’s largest walnut forest, and its fairy tale-like walnut forests is worth the detour.

Named after its missionary founder, Arslan Bop, one origin story of the village and the trees claims the seeds were thrown from the peaks of the Babash Ata mountains that tower over the town, and then planted by the wind. The image of an ancient missionary casting seeds to the wind actually lines up with carbon dating that shows the forests were planted around the same time as the missionary’s death, in 1120. 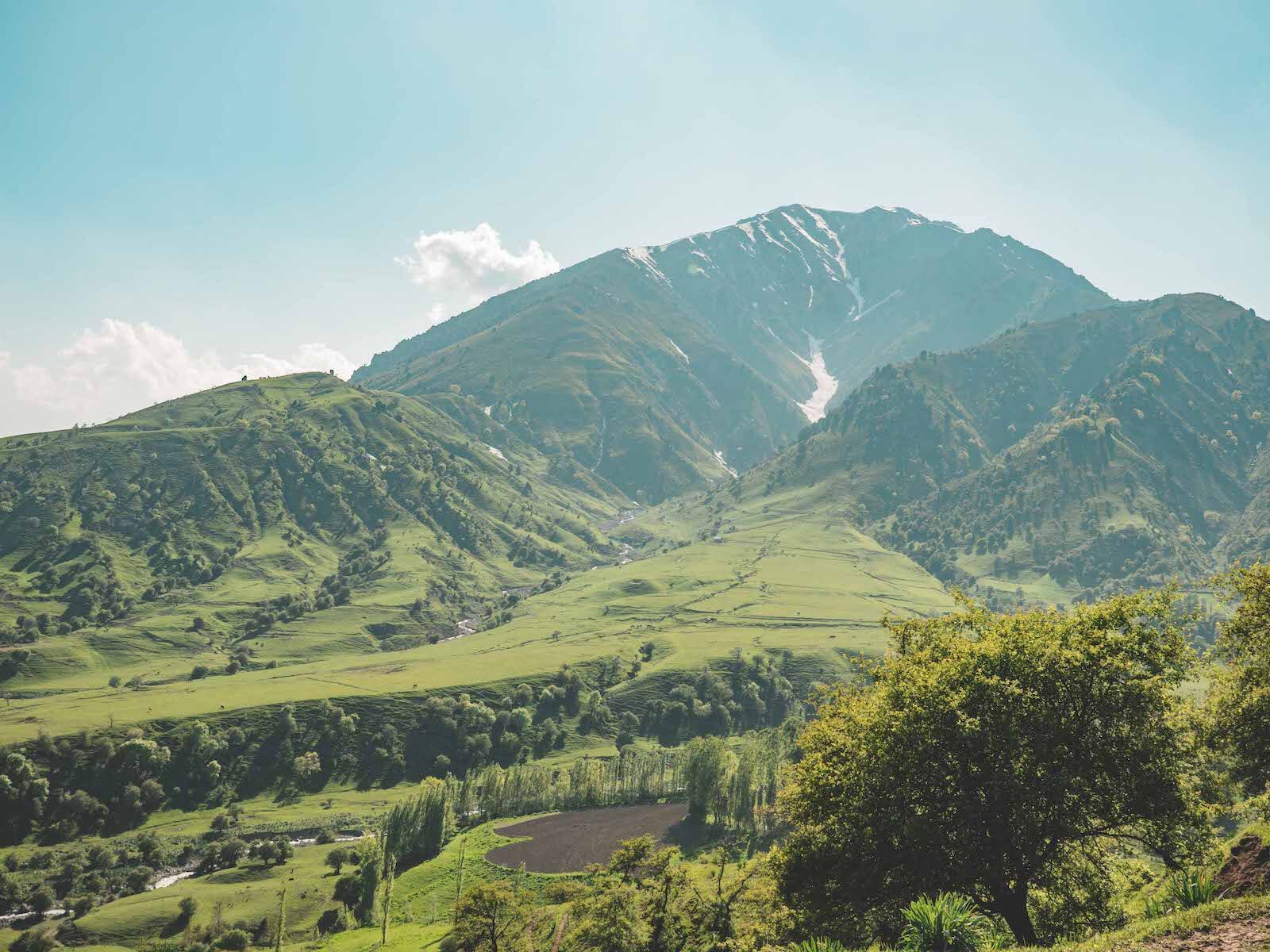 Since then, the mostly Uzbek population of this village, an ethnic minority in southern Kyrgyzstan, has relied on the walnut trees as an important source of income. On a good year the harvest brings in more than 1,500 tons of walnuts, contributing significantly to the local economy. These walnuts are exported as far as Turkey, Russia, and Iran. When the leaves begin to fall each October, thousands of residents camp out in the forests to collect the walnuts.

“We start with the trees in and around town, otherwise the school children collect the nuts and trade them for candy or ice cream,” says Hayat Tarikov, a retired forest ranger.

Tourism eases local families’ reliance on the walnut harvest or raising livestock. A bad year can represent real financial hardship for locals. In 2020 the harvest was a bust, leaving locals and researchers scrambling to understand why – some suspect overgrazing on the forest floor, others suspect a late frost. The harvest was better in 2021, and in 2022 the trees were full of buds, promising a good year.

How to participate in Arslanbob walnut harvest festival 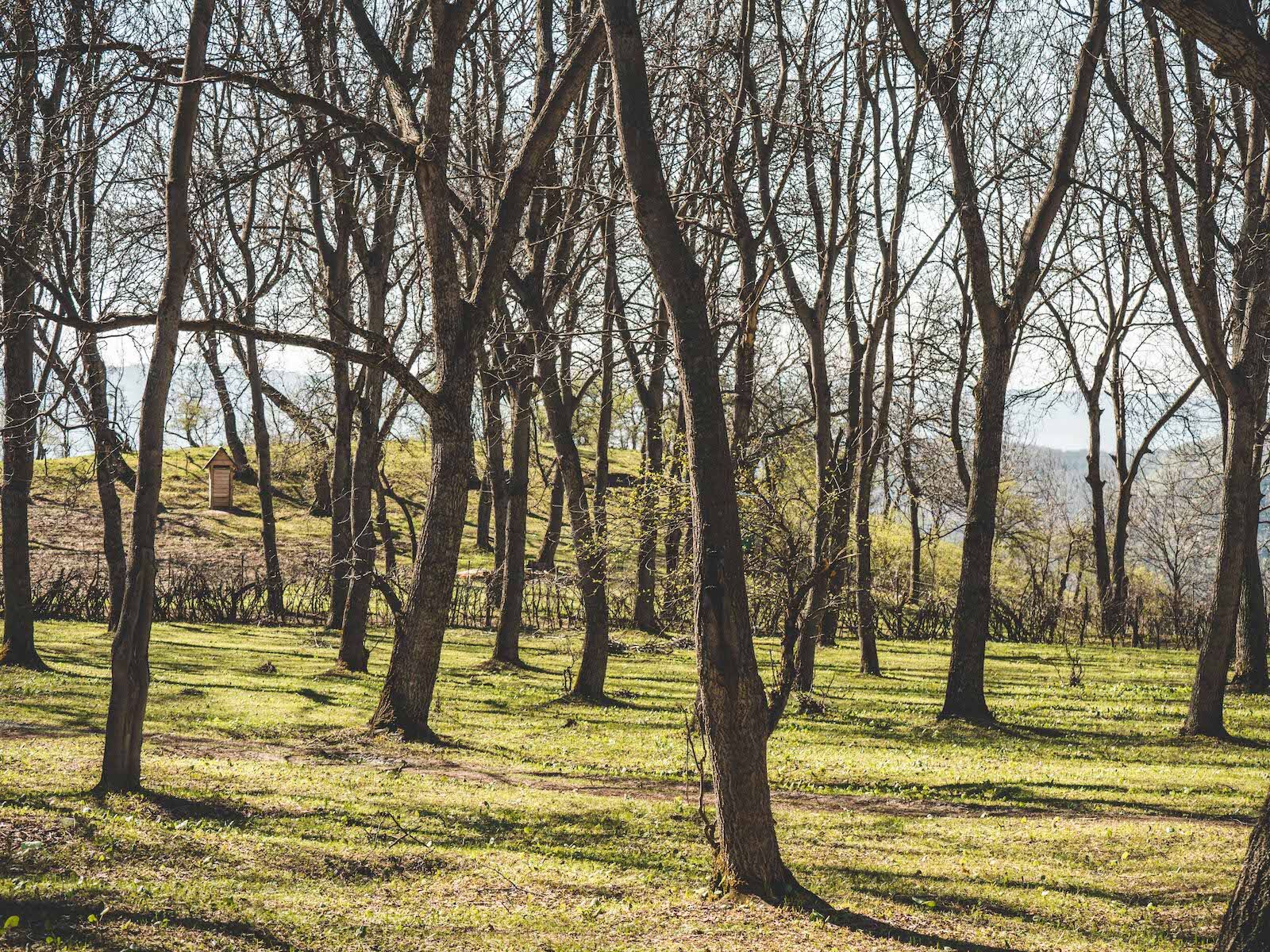 Hayat Tarikov left the forestry service upon the collapse of the Soviet Union, and eventually became the leader of the local Community-Based Tourism (CBT) chapter. CBT offices are locally managed organizations that match travelers with homestays and recreational excursions across Kyrgyzstan. The organization also organizes community events for locals and travelers alike.

In Arslanbob, the CBT chapter plays an important role in the walnut harvest, organizing a festival to celebrate the season each year on the first weekend of October. The festival revolves around the harvest, and there are both modern and traditional events that reach beyond picking walnuts. There are folklore shows and traditional games like weightlifting, wrestling or donkey racing, a walnut cracking contest, tug of war, and a nearly 5 mile foot race through the hills and forests. 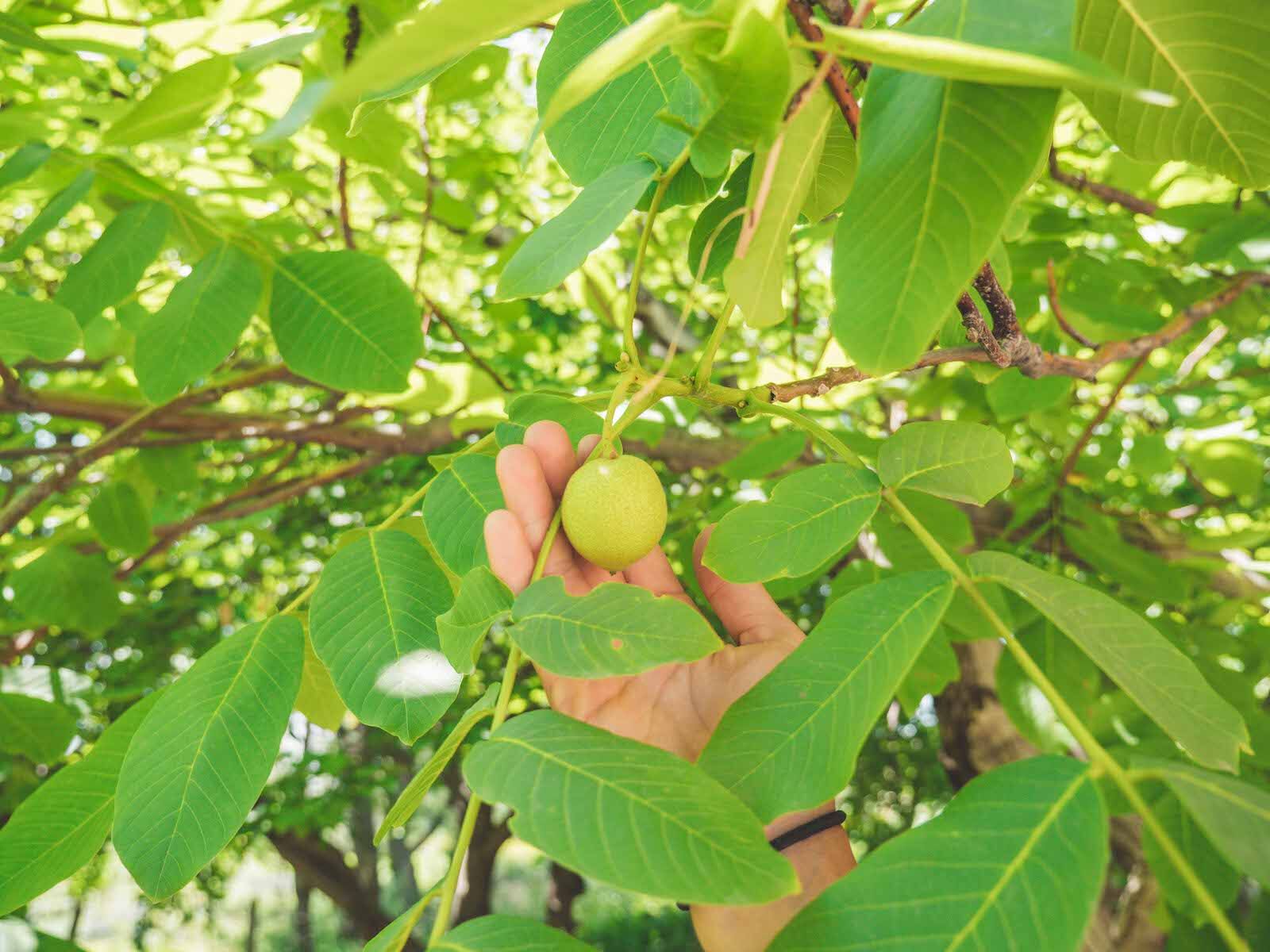 If you intend to visit Arslanbob for the walnut harvest festival, stop into the CBT. The staffers all speak English, and can set you up with a homestay or at the very least, point you in the direction of a family with whom you can gather walnuts in the groves above the village.

Alternatively, you could hike up the walnut forest on your own and join a family already gathering walnuts. However, you’ll probably have a better understanding of what’s happening in the village you go through the CBT.

You shouldn’t have trouble finding a welcoming group to join during harvest season: Travelers visiting the village in order to see the world’s largest walnut forest are welcome (and encouraged!) to participate in helping gather walnuts and the reward is quite savory; usually families gathering walnuts host barbecues at night. Traditional roasted meats may be served alongside an Uzbek classic: plov, a dish similar to pilaf, made with rice, vegetables, spices, nuts, and some varieties even include whole cloves of roasted garlic. Picnic blankets are also decorated with a variety of cold Russian salads, and dessert is usually rich walnut cake.

How to get to the world’s largest walnut forest 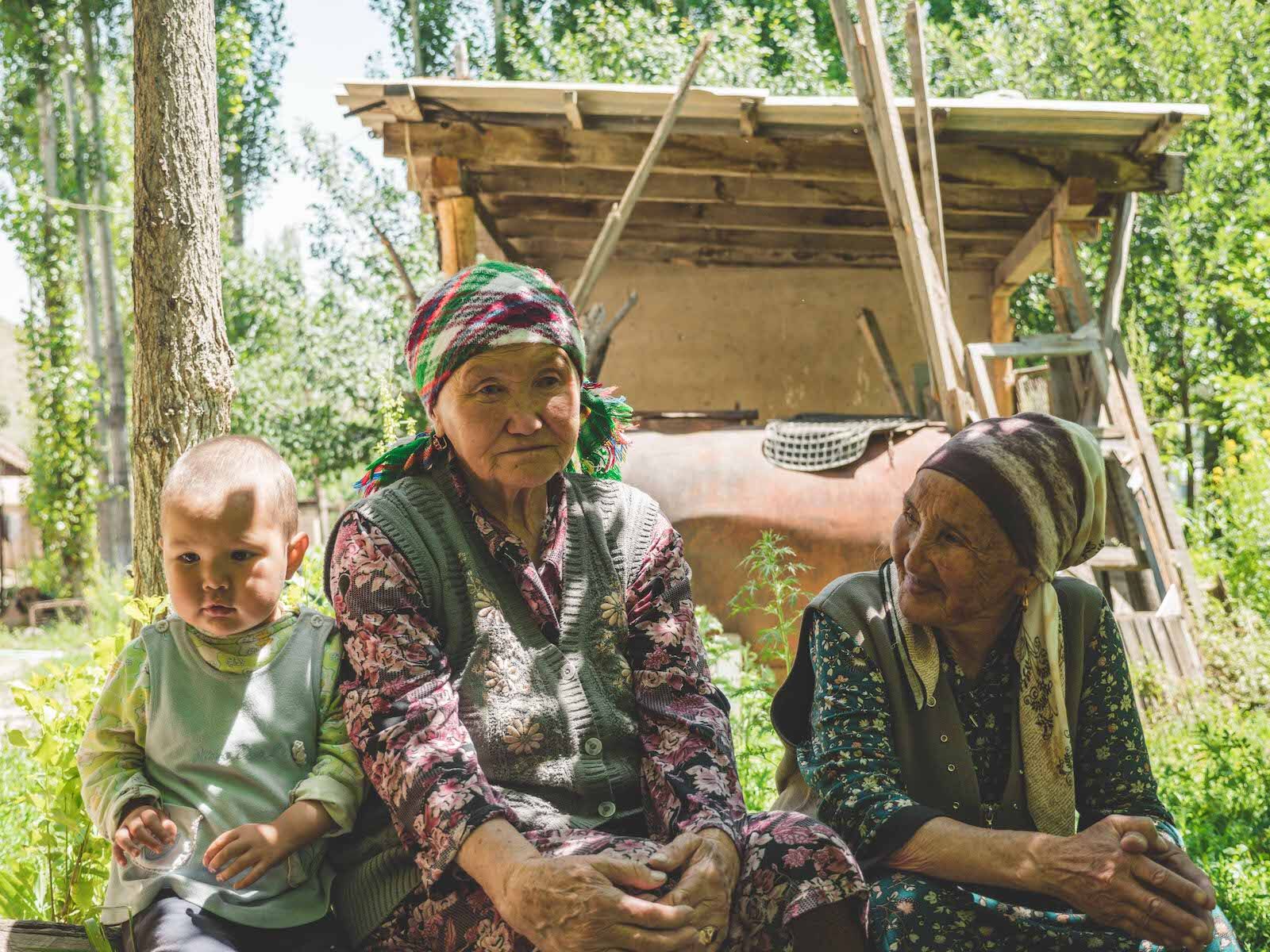 Though it’s a relatively small country, it usually takes a rather long time to get anywhere in Kyrgyzstan. A mix of bumpy roads, endless switchbacks, constant road repairs, and construction during the mild seasons is probably to blame. From the capital city of Bishkek, Arslanbob is about a 10-hour drive. About half-way through the trip, your shared-taxi or bus driver will probably want to take a break in one of the roadside restaurants serving pelmeni, originally a Russian type of ravioli served in a light broth. These establishments are definitely worth taking a half-hour break from driving.

If your Silk Road plans have you heading to Osh, Kyrgyzstan’s ‘southern capital,’ or Uzbekistan, or Tajikistan and the Pamirs, Arslanbob is a good place to stop over for a few days, even if you’re outside the walnut harvest season. Travelers can come in a shared taxi from Bishkek to Bazaar Korgon or Jalal-bad for less than $10 USD in a shared taxi, and then catch a second bus or shared taxi up to the village for a few dollars more. It’s also possible to fly from Bishkek to Osh (about $40 USD and an hour flight) and then take a bus or shared taxi to Arslanbob, which takes around 4-5 hours.

Public transport in Kyrgyzstan is reliable, and schedules are available at the bus stations or by asking locals. Almost any car you see waiting around at a crossroads might be a shared taxi, but in big cities like Bishkek or Osh, they depart from certain parking lots (usually not too far from the bus stations).

What else to do in Arslanbob 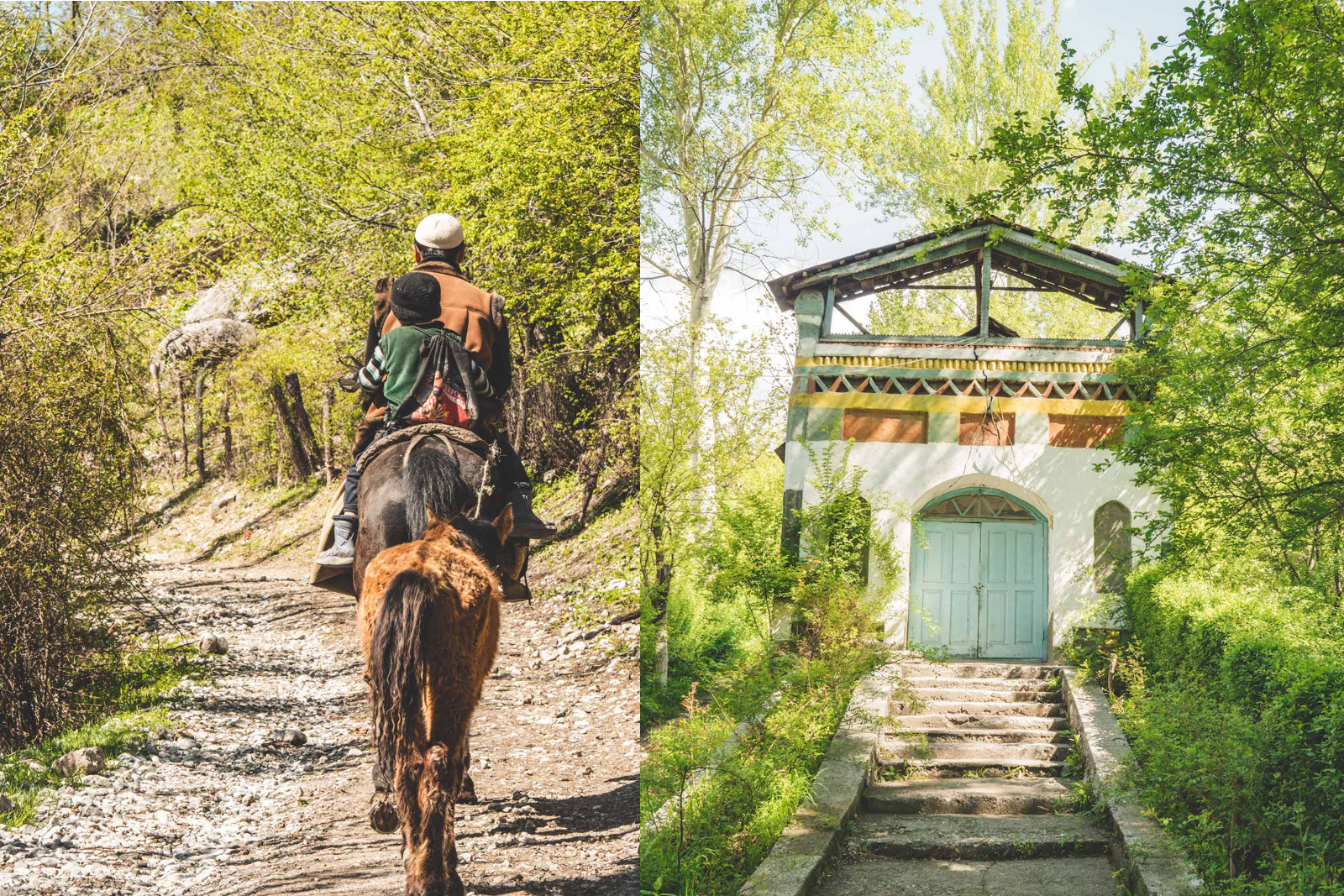 Arslanbob village has two easy-to-visit waterfalls, with hiking paths departing from the center of town. Spiritual visitors also sometimes pass through the village, looking for traces of Tengrism. Places in and around Arslanbob, like Holy Lake – reachable only after a two-day hike through the mountains – are home to relics of the Turkic religion practiced in Central Asia before Islam.

One often overlooked relic in Arslanbob is located just behind the central mosque. The Lion’s Gate, 100m from the town center, is a square of calm and solitude. A thin sidewalk leads up to a colorfully decorated wooden building. According to a local elder named Sadiur, this is a sacred place, and even during the USSR period when practicing religion was forbidden, people made pilgrimages to visit the tomb. Sadiur says Emperor Tamerlane dreamt of Arslanbob and was commanded to build a memorial gate here.

If you’re more interested in adventure, horse-trekking in the summer and back-country skiing in the winter are popular activities, although the skiing option is not for beginners and you should bring your own gear. It’s not all challenging outdoors activities though; there is a bit of a cottage core aesthetic to the village: Arslanbob’s wild berries, apples, and medicinal herbs can be gathered with the help of a local. There’s something for every Silk Road explorer to do in Arslanbob.

Exploring Scotland’s great cities: festivals, folklore and a love for the written word

Songs, stories and sea kayaking: a writer returns to the Outer Hebrides