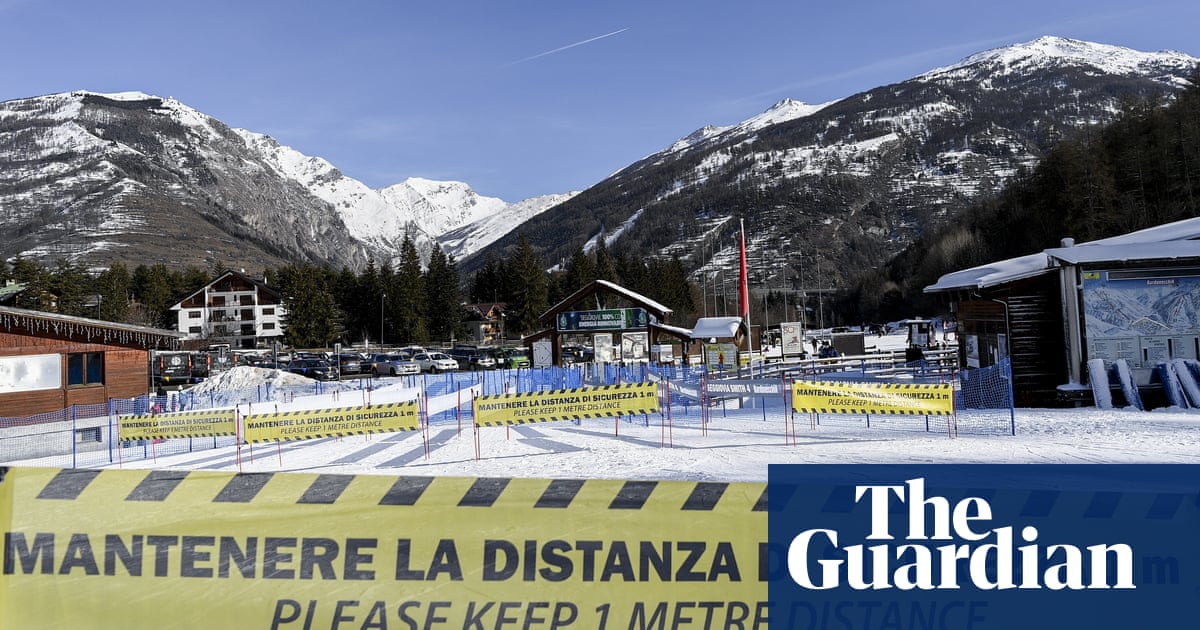 Enrico Rossi was among the protesters in Bardonecchia when the Italian government decided in February to maintain a Covid shutdown on ski resorts just hours before the slopes were due to reopen.

Rossi described the loss of the ski season as a tragedy for the small town and others in the Susa Valley, Piedmont, especially after the 2020 season had also been cut short.

But as the resort prepares to reopen in early December, he is cautiously optimistic. “Three times during last year’s season we were ready to start – we prepared the slopes, hired staff – only for it all to get cancelled,” said Rossi, who is vice-president of Bardonecchia’s tourism consortium. “It was very disappointing. But the prospects for this year are looking good. Bookings are coming in, mainly from Italy, and the pandemic situation is different; let’s hope nothing changes.”

Some Italian ski slopes have already opened, albeit with the requirement to present the Covid-19 health pass when using ski lifts, reduced capacity in cabins and social-distancing measures at ticket offices. Face masks must be worn on ski lifts and in “common areas” as part of the protocols agreed by the Italian ski industry.

“Customers aren’t complaining – the desire to ski is much greater than the annoyance of having to abide by the rules,” said Herbert Tovagliari, the president and CEO of Cervinia Spa, a travel and tourism company in the Aosta valley.

Tovagliari said Cervinia, a popular resort close to the Swiss border, has had a high number of weekend visitors since reopening on 16 October, while hotels are seeing strong demand for the coming months. “We’re seeing decisively high numbers for the start of the season, which gives us hope,” he added.

The ski season is a huge financial resource for Italy and many villages across the mountainous northern and central regions depend on it for survival. The economic cost to the sector and affiliated businesses of the shutdown last year was estimated by Coldiretti, the farmers’ association, at €10bn (£8.6bn).

“In a standard year we would make €28m. In 2020 we made €2.5m, and that was only from tourism during the summer period,” said Tovagliari.

Rubbing salt into the wound, snowfall across Italy’s ski resorts last year was bountiful. “The snow was brilliant. We had a beautiful winter, but few people could enjoy it,” said Rossi.

Cervinia, at an altitude of 2,050 metres, is so far operating on a mix of natural and artificial snow, while resorts in Bardonecchia are stocking up on the artificial variety just in case.

Ski resorts in Piedmont’s Lanzo valley, which sit at an altitude of between 1,300 metres and 1,900 metres, are yet to see any snow. Livio Barello, president of the consortium of tourism operators in the area, hopes that will change as resorts across the valley prepare to open in early December, especially as there has been a boom in bookings over the Christmas period.

“We’ll needs years to recuperate the economic losses from the last couple of seasons, but the signs are very positive,” said Barello.

Barello works at Rifugio Lunella, a mountain hut in Viù, a town of about 1,000 inhabitants. Businesses benefited from a Piedmont region-wide holiday voucher scheme that offered visitors three nights for the price of one, an initiative that brought in a significant number of people in the summer and has supported some of the bookings this winter. “Everything revolves around tourism, it’s the soul of the economy,” said Barello.

When the ski season was cancelled last year, Gianni Poncet, the mayor of Sestriere, feared the village of just over 900 inhabitants in the Susa valley would turn into a ghost town. The resort has 217 miles (350km) of slopes, and before the pandemic the population would swell to 20,000 a day during the ski period.

Today, Poncet is feeling much more upbeat. “The atmosphere is much better this year, thank God,” he said. “We’re working hard to make sure everything goes well and have a plan to reopen safely. The Covid rules are still there, but these must be respected so that the season can properly start.”

Jaw-dropping ‘House of Gucci’ villa is available on Airbnb

Feast and be merry: 10 UK winter villages for Christmas food and drink