There are other spooky creatures out there than the witches, vampires, and zombies we’re used to seeing every Halloween. Every country in the world has a famous mythical creature that scares the children and keeps adults’ imagination alive, whether it’s dragons, a griffin, or even a spiteful merman.

CashNetUSA compiled a list of the most popular mythical creatures in every country in the world. It used bestiaries and encyclopedias like Monsters and Mythical Creatures from Around the World to gather its information, and then used Google data to confirm which creatures were the most searched in each location. After thorough research, it created a series of maps showing the most famous creatures in each country. 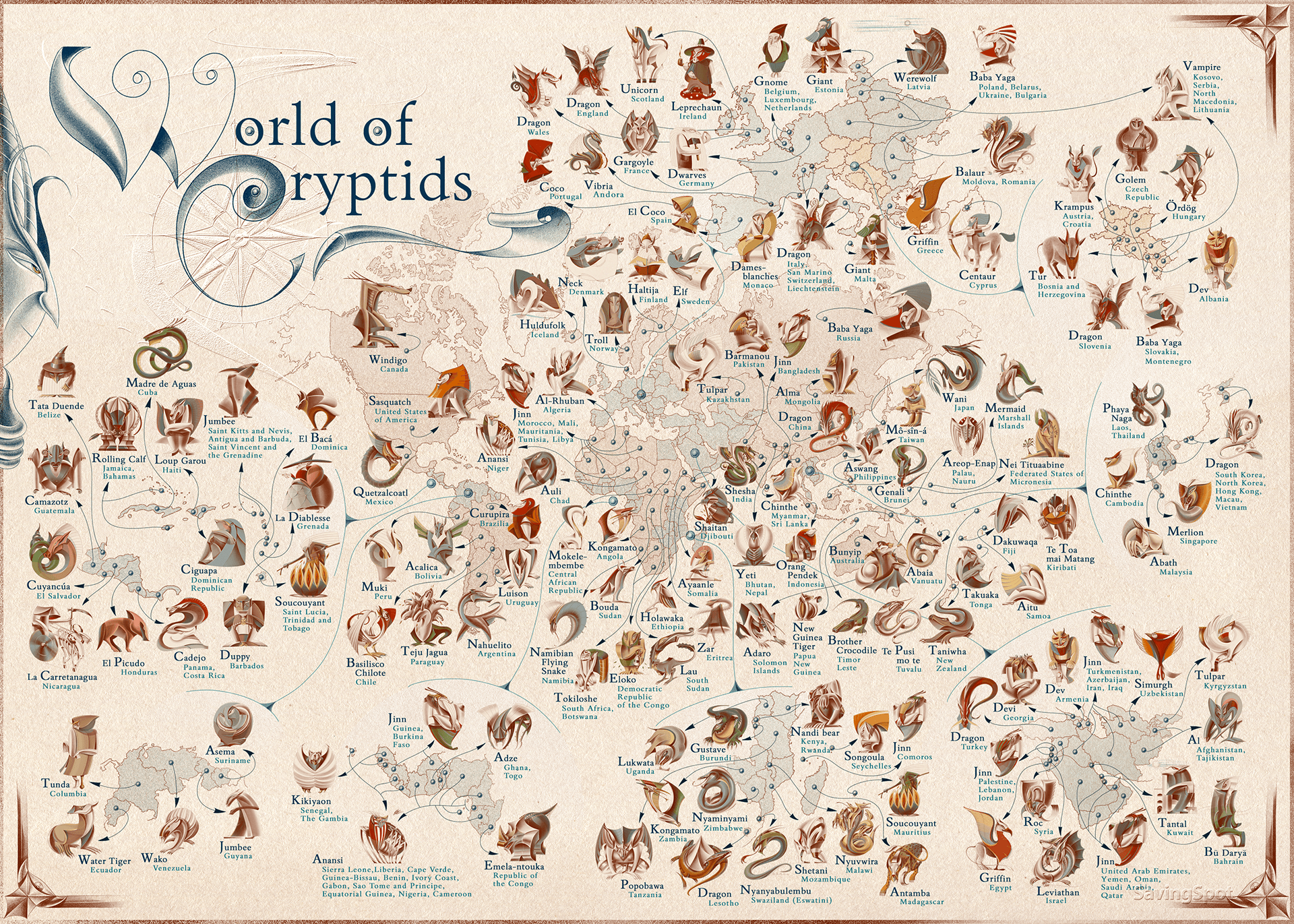 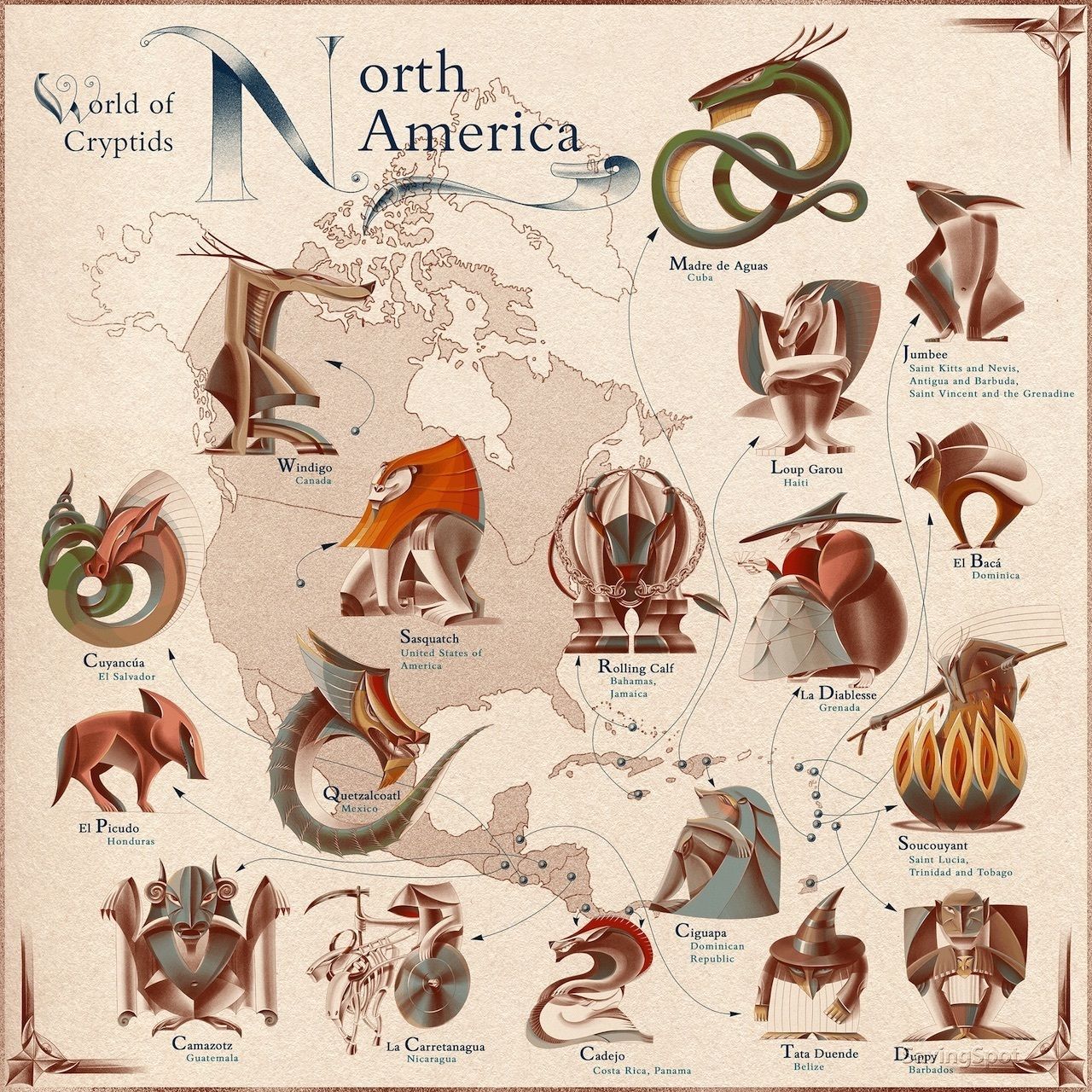 Sasquatch or “Bigfoot” is known to many residents of the United States, though only a few have actually seen it. The name “Sasquatch” originates from the Salish word “se’sxac” or “wild men.” The creature is allegedly covered in hair and dwells in the forest, and has somehow evaded photo evidence of its existence. Also popular in North America is Cuba’s Madre de Aguas — a huge, horned, bullet-proof snake — and Nicaragua’s La Carretanagua, which takes the form of an ox cart driven by a skeleton. 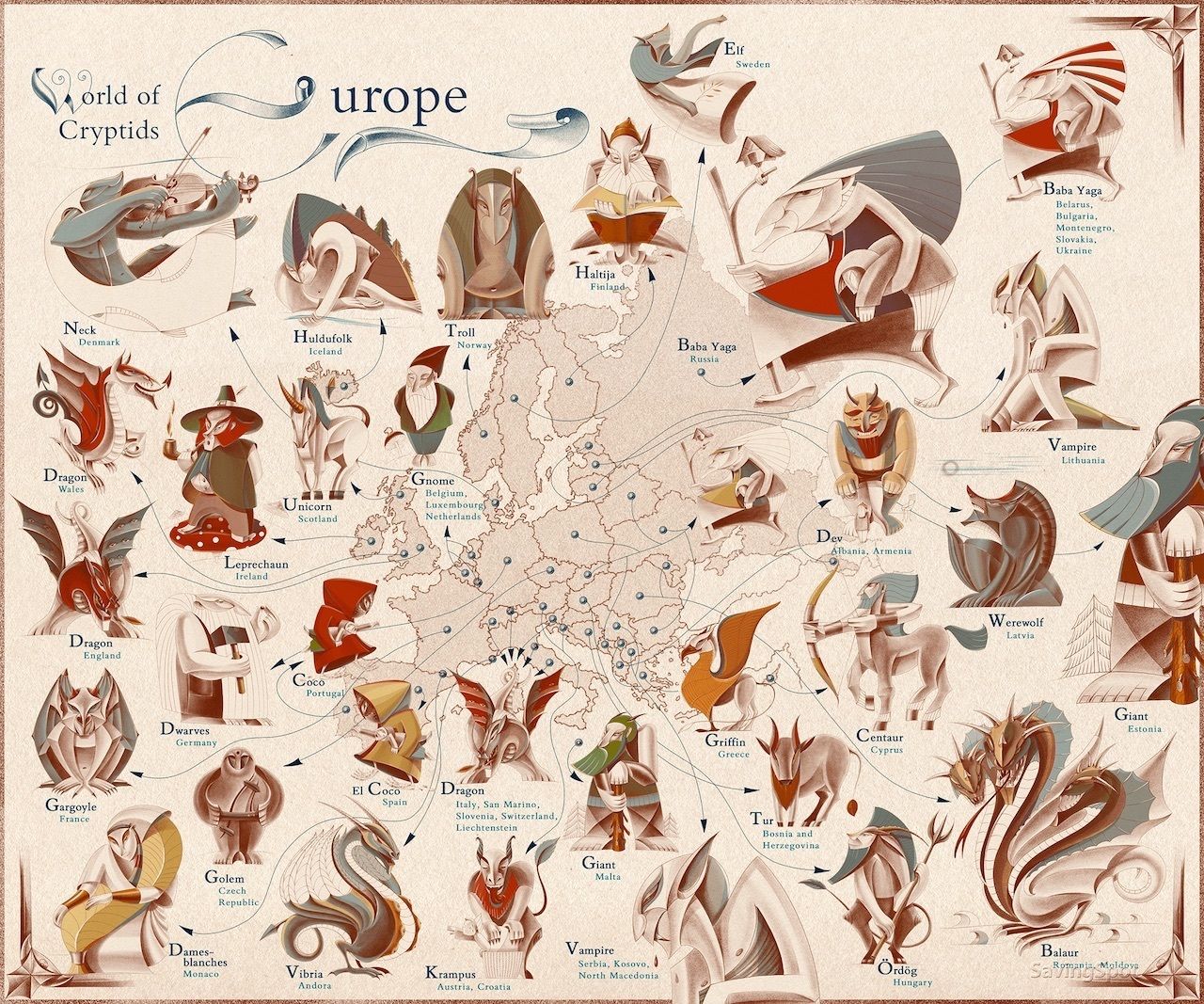 It’s probably no surprise that the most popular mythical creature in England is the dragon. The winged beast also tops the list in Wales, Switzerland, Liechtenstein, San Marino, and Italy. Wales’ national flag depicts a particular dragon that was supposed to have been discovered at an underground lake in the fifth century. Elsewhere in Europe, especially in the east, the Baba Yaga, an old and deformed witch who lives deep in the forest and has cannibalistic tendencies, is the most popular mythical creature. It is well-known in Russia, Belarus, Bulgaria, Montenegro, Slovakia, and Ukraine. 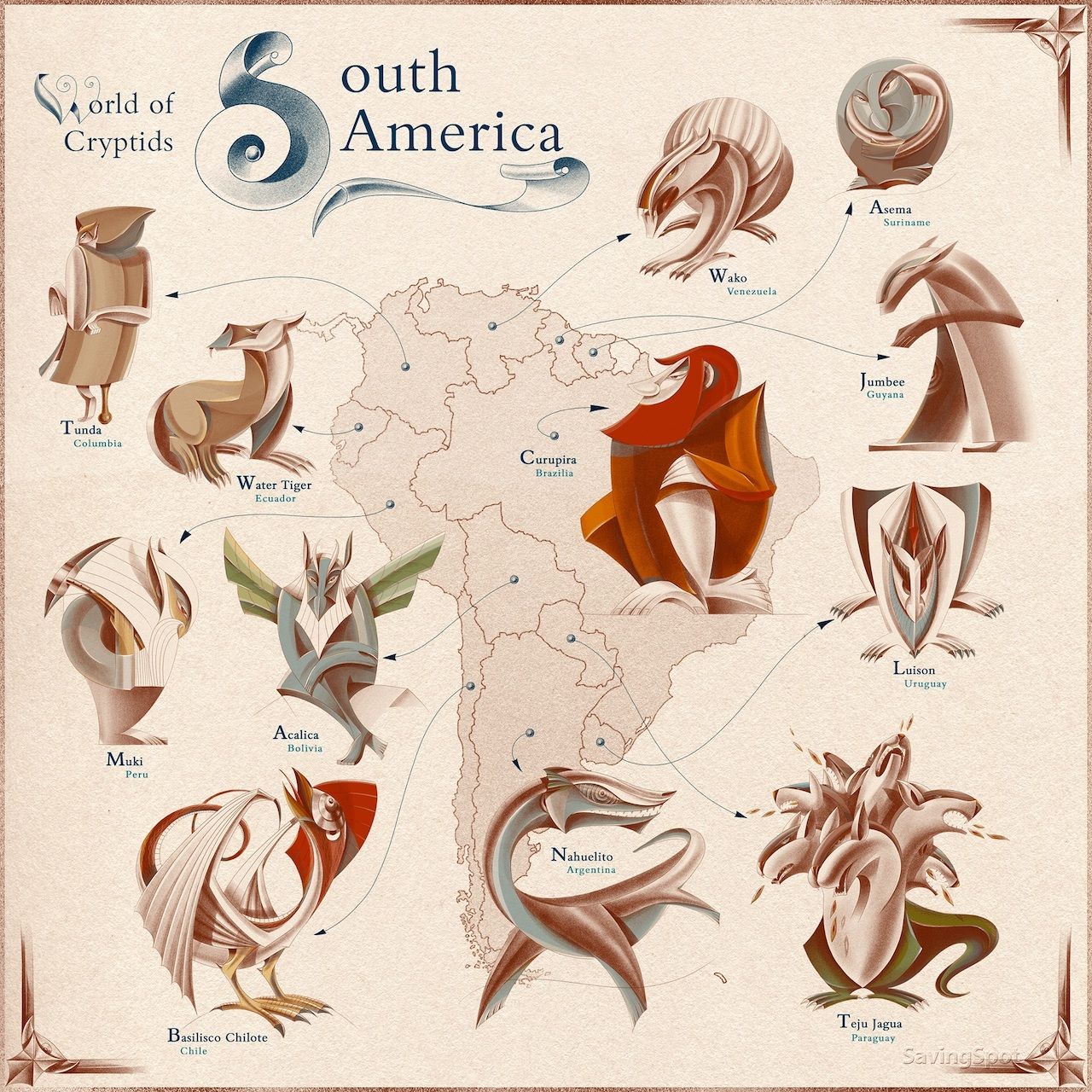 The most famous mythological creature in South America is the La Tunda, originating in Colombia. The one-legged hag’s signature behavior is farting on seafood and offering it to her prey. Her victims are typically unfaithful men and children who misbehave. You can spot her by her unusual legs — one of which is missing and has been replaced by a wooden spoon. Elsewhere in Paraguay, the Teju Jagua is among the most widely known creatures. The Teju Jagua is a lizard with seven dog heads and eyes that shoot fire. 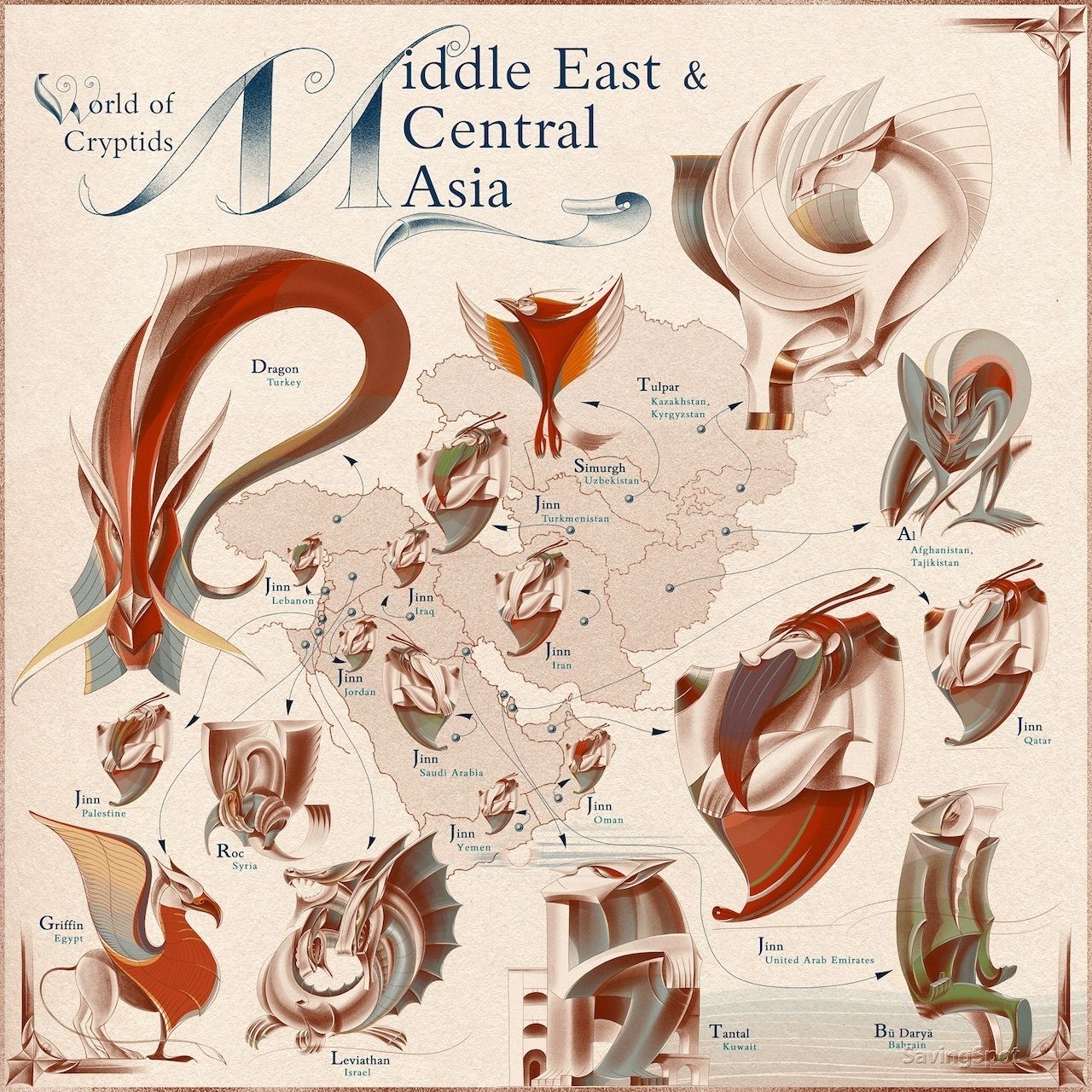 The Middle East is the home of the Jinn, mythical genies who live in inanimate objects and can assume either human or animal form. Jinn grant wishes, but those wishes often have unexpected results. They are most prevalent in Iran, Jordan, and Iraq, and are the most searched mythical creatures in all of the Middle Eastern countries. But Jinn don’t have a total monopoly on the mythical creature scene in this area of the world. Known as the “lord of the sea,” the Bu Darya of Bahrain is a giant merman who sneaks onto ships at night to kidnap sailors to eat. 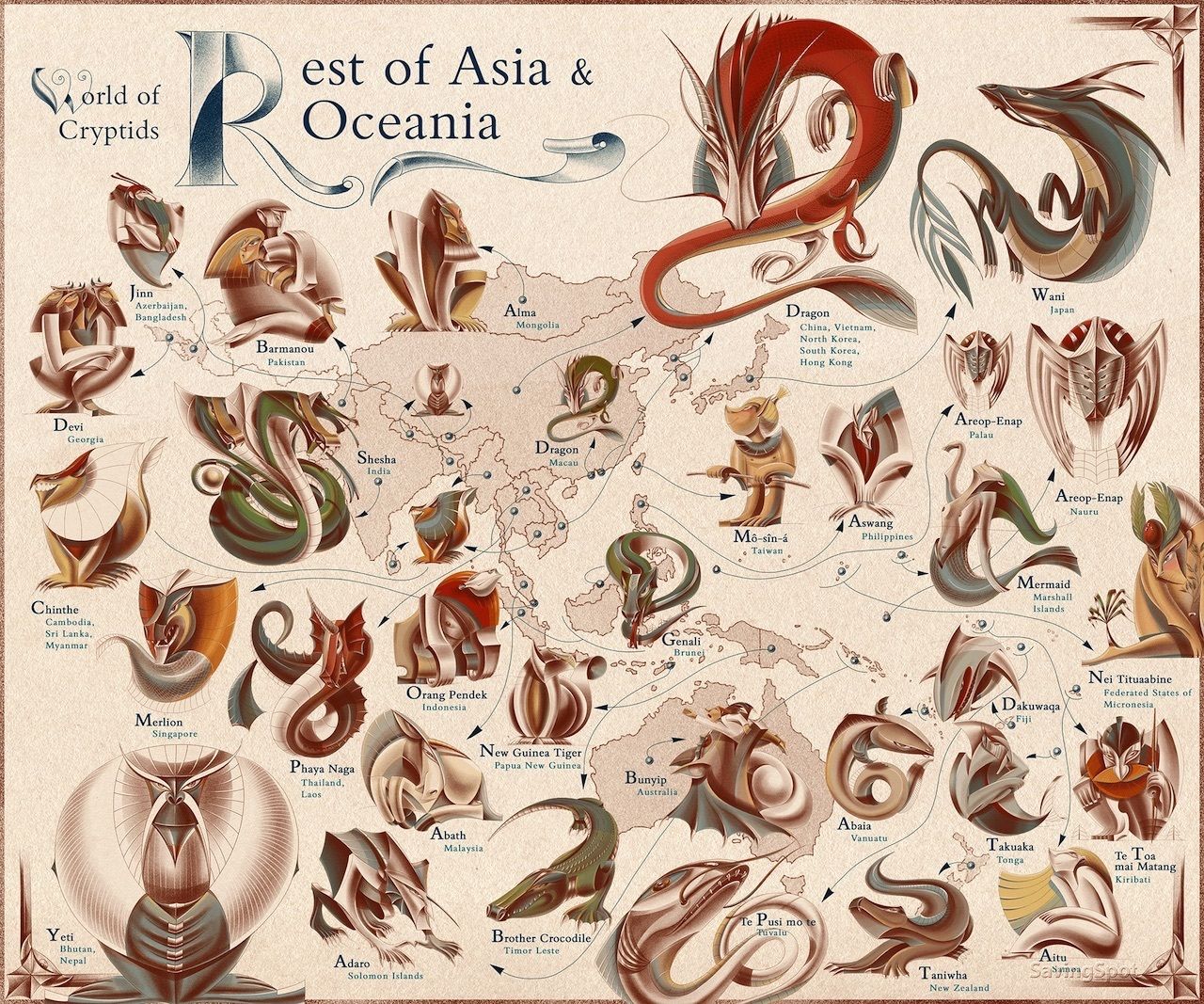 Like in Bahrain, Oceania is also beset by mermen. The Adaro dominate the Oceania region, as mermen haunt the waters around the Solomon Islands. Adaro have swordfish-like spears growing from their heads, and attack by throwing poisonous flying fish at victims’ necks. In the Republic of Georgia, the Devi is the creature of choice. These hairy, horned ogres have multiple heads, which grow back whenever you cut one off. 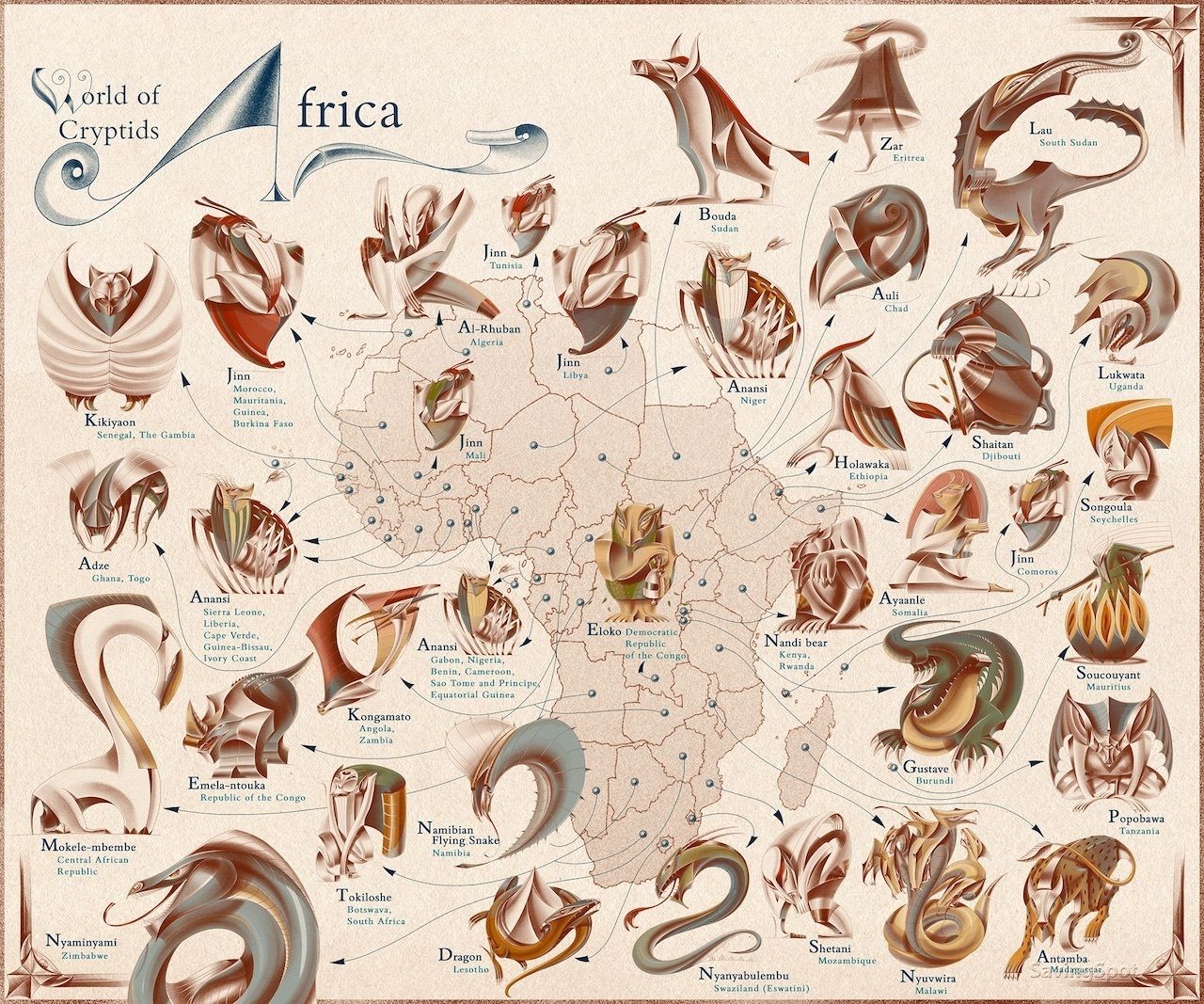 The most terrifying mythical creature of all time might be the Namibian Flying Snake. The snake is up to 25 feet long with a 30-foot wingspan, and has a bioluminescent crest, horns, an inflatable neck, and an ear-shattering roar. It feeds on livestock and often frightens farmers. In Kenya and Rwanda, the Nandi Bear is the most prevalent scary beast. This nocturnal bear has red hair and is known to scalp anyone who startles it. So don’t startle it.