Tucked into an arid piece of land on Africa’s southwestern coastline, Namibia may not be an obvious choice for long-haul travelers. But even during the COVID-19 pandemic, it’s still a destination that’s within reach of the United States and Europe. And in many ways, it offers up a combination of adventure, wanderlust, and solitude perfect for the times. If you can get there, there’s never been a better time to visit — crowds, and prices at several luxury lodges and tour operators, are at an all-time low.

Although a typical Namibian tourism brochure may not immediately reveal the diversity, and spark the excitement of, for example, neighboring South Africa, it’s a country brimming with natural beauty that few in the world can replicate.

In the more fertile north, the famous Etosha National Park spreads out across 8000 square miles of pristine land and offers one of the world’s best wildlife experiences. Along the country’s 976 miles of coastline is the Skeleton Coast, so named for its knack of claiming the lives of whales, seals, and various passing ships, the remains of which still linger ominously and strangely photogenically on the windswept beaches.

But if there’s one image of Namibia that lingers foremost in the minds of those who’ve seen it, it’s that of dead trees that stand frozen in time, set against towering sand dunes, in the country’s most Instagram famous natural attraction, Sossusvlei. 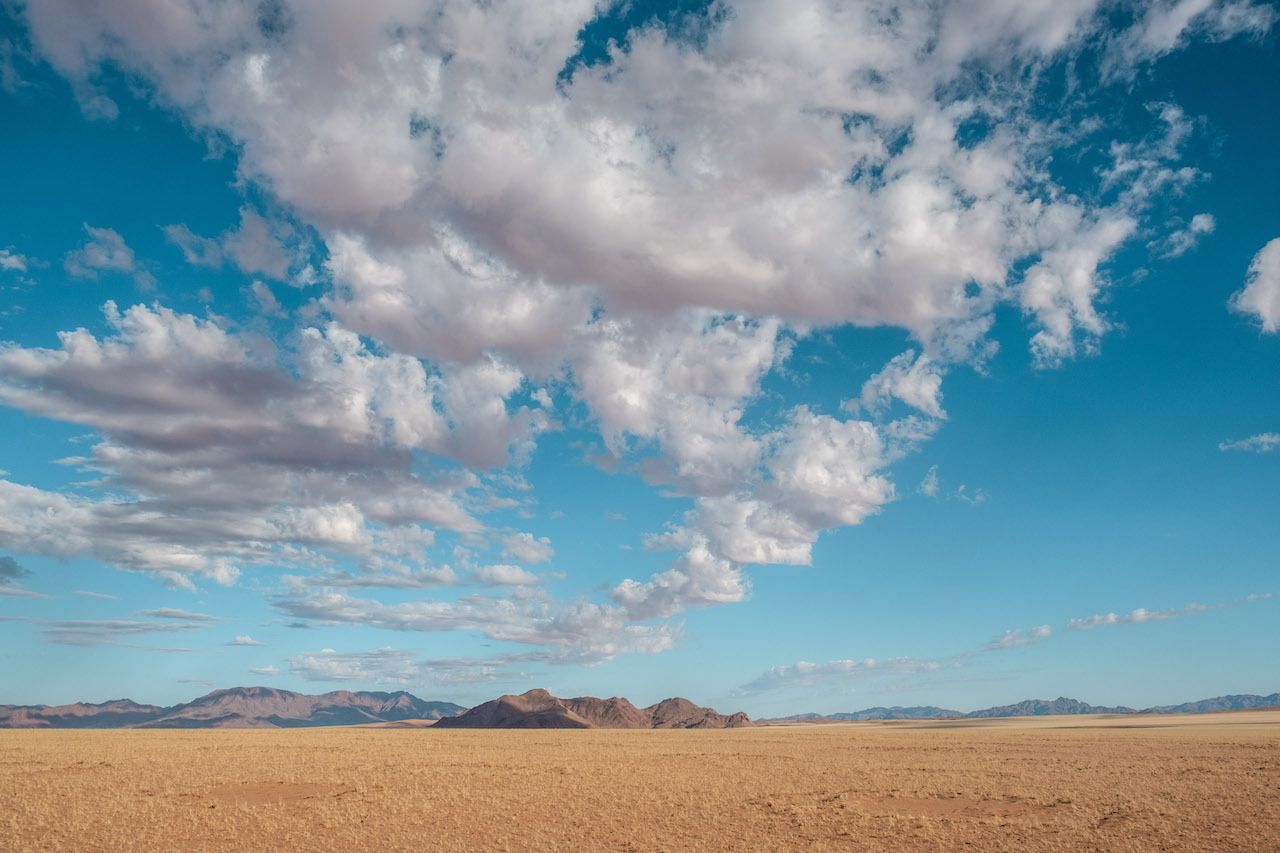 It’s this attraction — and an ironic desire to escape the pandemic by further isolating myself — that saw me packing a bag for the NamibRand Nature Reserve, a massive, otherworldly span of land shaped and defined by the Namib desert.

“Ready to head off into the desert?” Scenic Air captain Wesley Thompson said as he took my bag at the entrance to the small Eros International Airport airport. “Our flight today may be a bit bumpy, it’s warming up a bit already, but I’ll do my best to keep her steady over the dunes.”

It had just gone 10:00 AM in the Namibian capital, and the temperature was already well over 70 degrees fahrenheit. Ahead of me was my second, and most exhilarating, flight of the day. The first was a somewhat more traditional affair that landed at Windhoek’s Hosea Kutako International Airport. There, I’d submitted to a variety of now-standard COVID-19 screening protocols — hand sanitizers, face masks, temperate checks, and the presentation of a negative PCR test taken no more than 72 hours before departure.

Travelers who are unable to meet the 72-hour test rule can submit a test taken seven days before their flight, provided they quarantine at their hotel for the week. In all, it’s a set of requirements that are enough to set the mind of the anxious traveler at ease — but not enough to dissuade those eager to explore.

Returning to home countries may be a slightly trickier affair — but unlike neighboring South Africa, which is facing a raft of restrictions, Namibia is still largely considered safe. The country has had a share of cases, but its population density of just eight people per square mile, and stringent lockdown measures, have counted in its favor. Windhoek is also well equipped with testing facilities that can provide results within 24 hours for return flights, and several hotels are also providing in-room testing services for homeward-bound guests.

Flying into the desert

After the international flight, and the crowded arrivals hall, followed by a commute across town to Eros International, I was more than ready to immerse myself in solitude once again.

“We’ve had a lot of rain in recent months, the first in ten years,” Thompson said as he walked me through airport security and out onto the runway. “You’ll see that large parts of the desert is covered in grass. It’s incredible to see from above.”

He motioned for me to climb aboard a small Cessna parked alongside the runway, and after the necessary pre-flight checks he fired up the propellor and drowned out any possibility of further small talk. 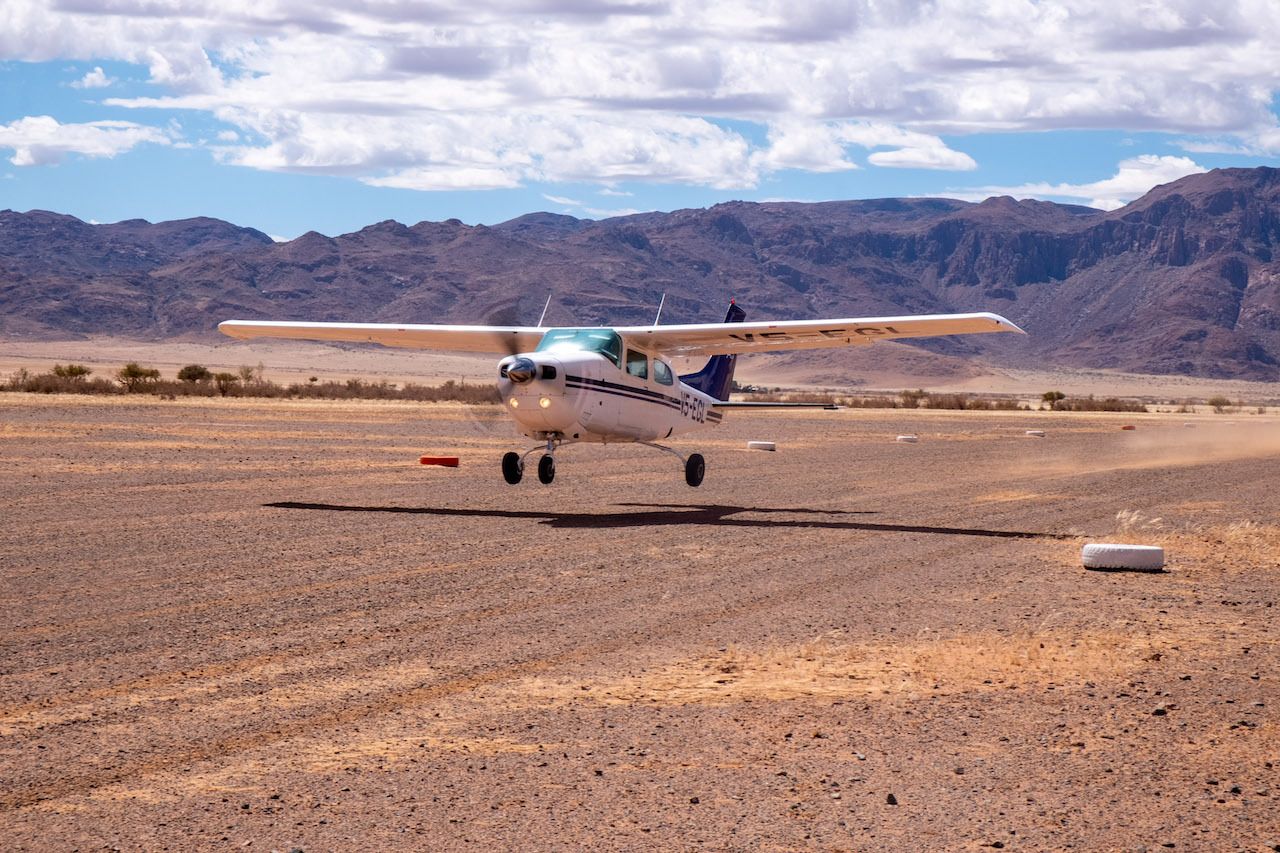 Over the next hour, I watched the scenery shift from low buildings in the small capital city to rolling green hills, and then to the stark desert I’d been yearning for. Just as the turbulent ride became almost too much to handle, Thompson banked a hard right above a desert runway — to my untrained eye little more than a stony dirt patch — and prepared to land.

From above I noticed an oryx resting in the shade of a single tree, and in the distance, a herd of zebra, spooked by the loud engine, kicked up dust as they scattered into the distance. After two more turns to check the runway for wildlife and soft sandy spots we touched down, where the only other human was a man in a Land Cruiser who introduced himself as Papa G with a COVID-induced distanced fist bump.

Papa G, whose real name is Gert Tsaobeb, works for Natural Selection, a company with several lodges located at Namibia’s most famous attractions. For the week, I would be staying at the company’s Kwessi Dunes — an off-the-grid desert oasis that ironically opened its doors just a few days before COVID-19 forced its closure. 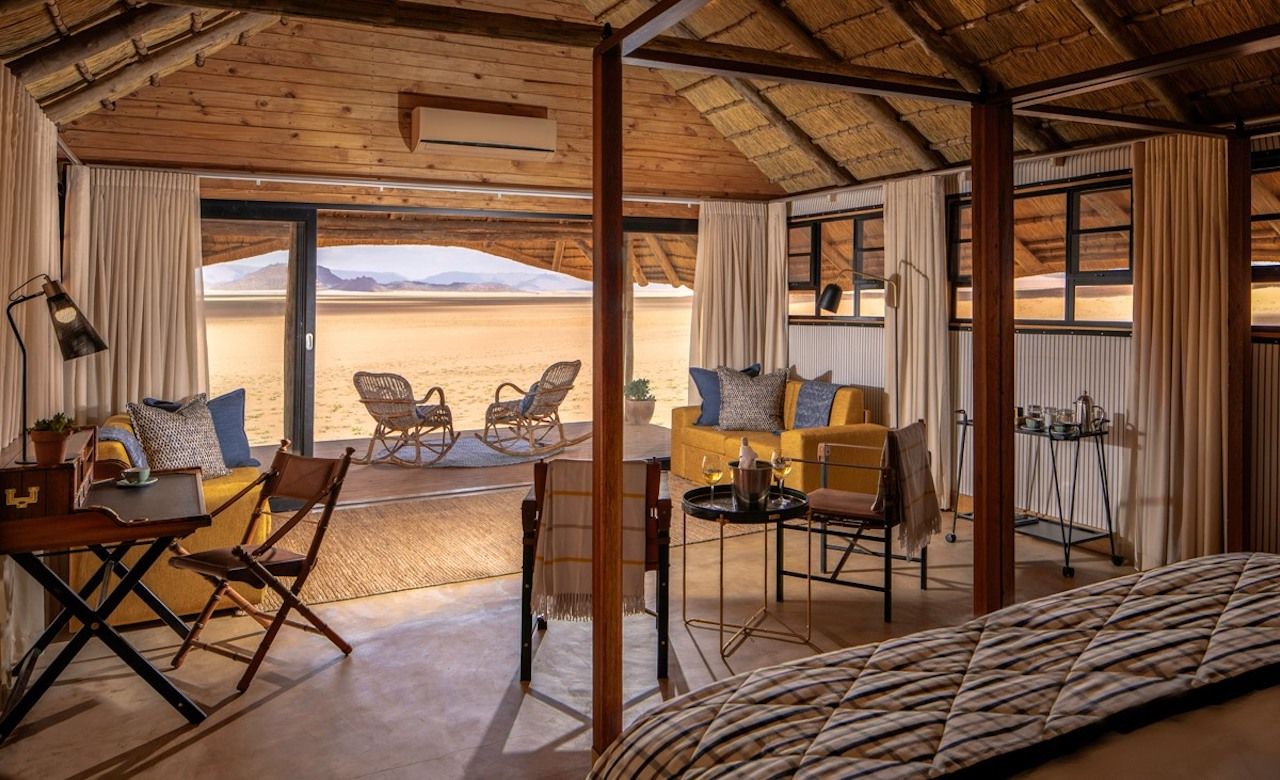 Although a lodge like this, which comes complete with a personal guide, an all-inclusive menu and open bar, luxurious tent-style accommodation, and some activities already included, may sound extravagant, Natural Selection like many others in Namibia is running deep specials in an attempt to lure tourists back to Namibia. Although there’s no shortage of thriftier ways to experience Namibia, including self-driving and camping, it’s an experience that’s now, at least until the pre-pandemic tourism numbers return, is more within reach of the average traveler.

The perfect introduction to Namibia

Lodges like Kwessi Dunes, in the NamibRand, serve as the perfect introduction to Namibia. Sossusvlei, where you’ll find the iconic dead trees set against the famously scaleable dunes, is a 90-minute drive away — which the company will ferry you to in a comfortable closed Land Cruiser. And with Papa G running the show, I had little to do but pitch up, climb aboard, and gaze out at the early-morning scenery as we approached the landmark. 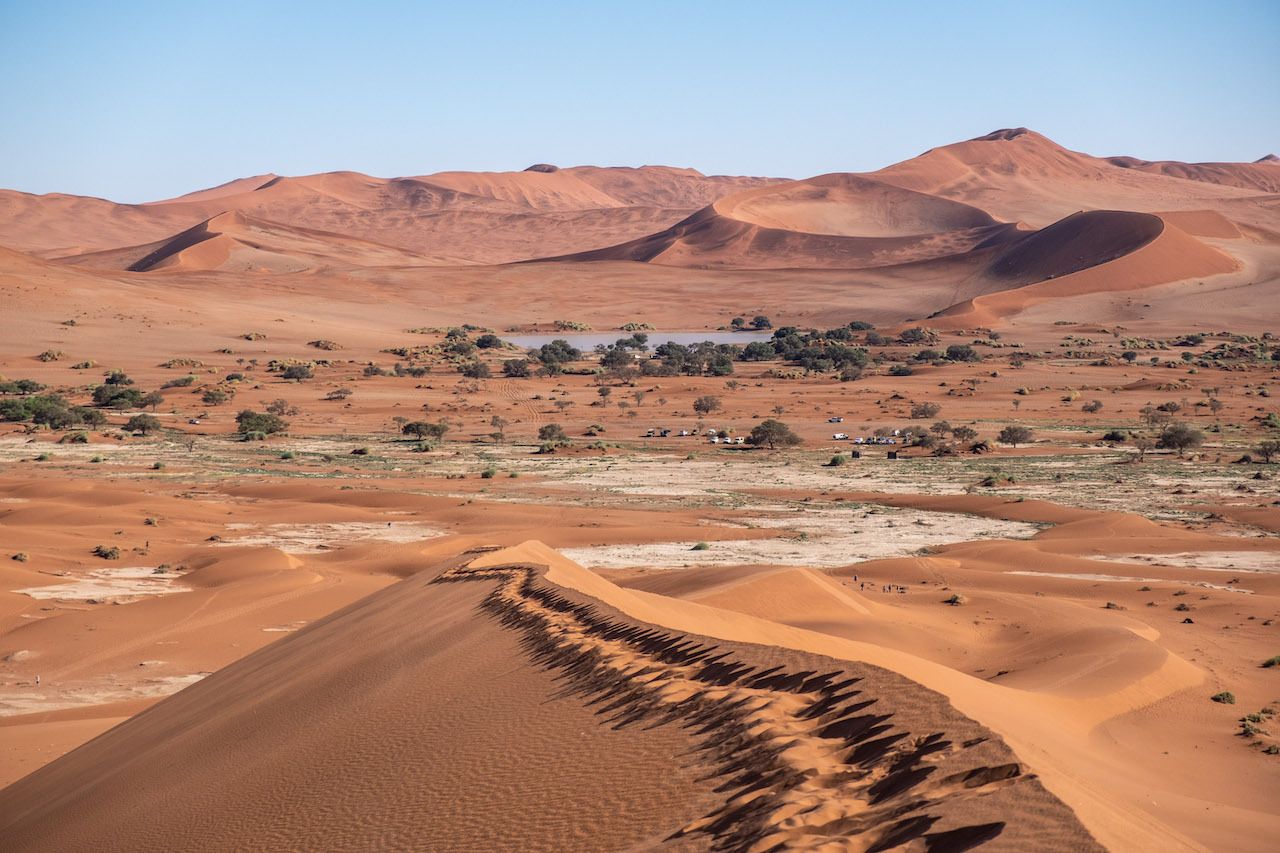 As we placed the first footprints on a winding dune, Papa G explained just how atypical our morning’s experience was.

“Before the pandemic, it was impossible to be the only people here,” he said. “Although that does make it a bit harder to climb when you’re the one making the first imprints on the dune.”

Before the pandemic, you’d have to share a dune climb with other travelers, and Deadvlei below, where you’ll find the trees, is usually swarming with posing Instagrammers, often complete with costume changes, Papa G explained.

But on the warm April morning, as we plodded slowly up a dune carefully selected to give me the best perspective on our surroundings, I counted less than a dozen people below, all of whom were miniature specks dwarfed by their surroundings.

The surrounding Namib desert offers more than just Sossusvlei, though — a statement confirmed by the sunrise hot air balloon ride I embarked on the following day.

Pilot Dennis Hesemans, whose family-owned company Namib Sky Balloon Safaris, has felt the full weight of COVID-19 on his business — and yet if the dwindling tourism numbers had taken a toll on him he wasn’t about to show it as he floated us high above the desert sands, dunes, and jagged mountains with a cheery lilt in his voice.

“Welcome to my office!” he said before blasting fire into the balloon above. “There aren’t many places in the world that offer flying conditions as good as these. Before the pandemic, we were unlucky if we weren’t able to go out most days of the year.”

As he piloted us through the desert skies, Hesemans pointed out some of the attractions below us which slowly came to life as the morning sunlight landed upon them — notable dunes, surrounding mountain ranges, herds of oryx often oblivious to our presence, and the bizarre “fairy circles” — inexplicable near-perfectly round yurt-sized circles devoid of any vegetation that dot the orange sands. 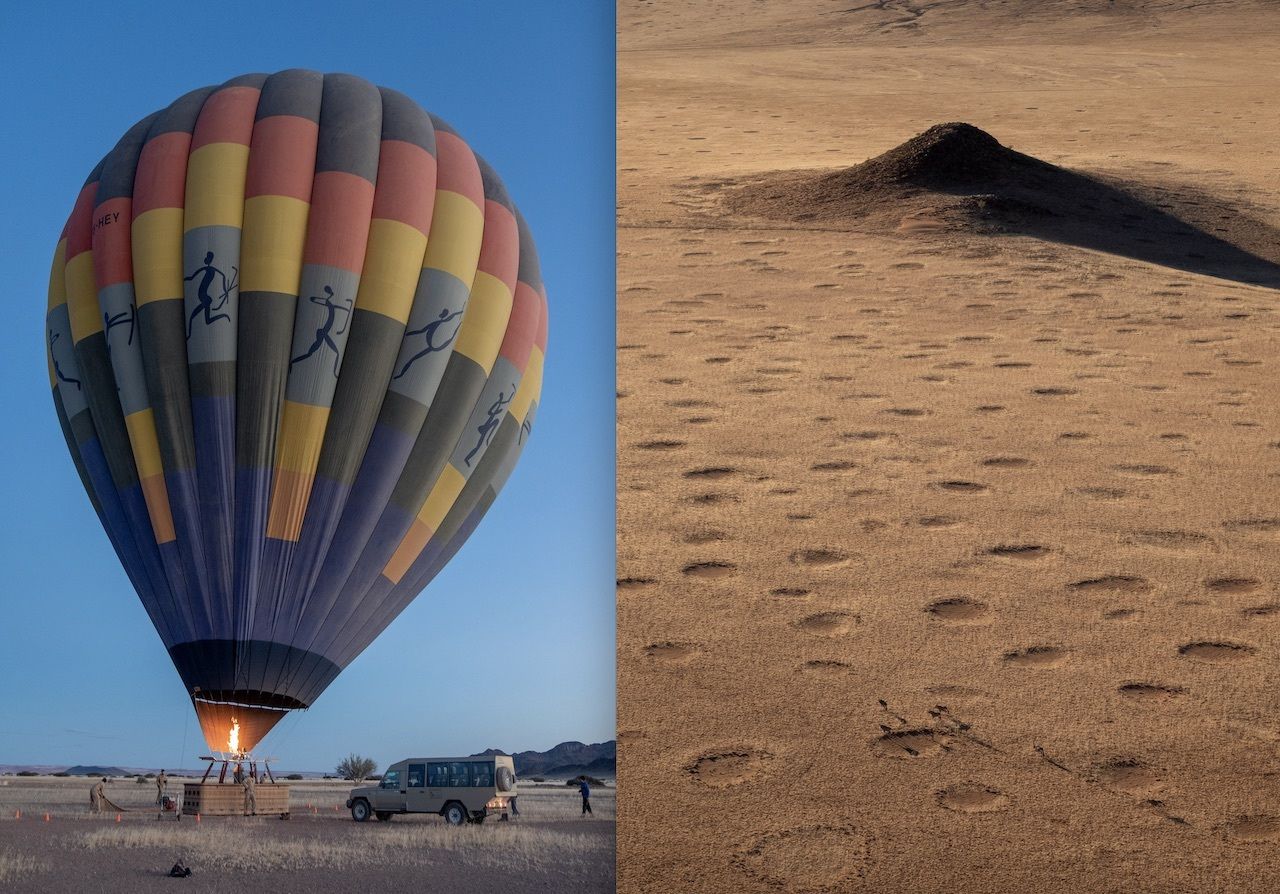 For the acrophobic, there’s also a lot to see and do that’s closer to the land — including nature walks and quad bike excursions through the dunes that also reveal some of the secrets of the land and the animals that inhabit it.

Aside from the roaming herds of stoic oryx, who must have been purpose-built to survive the hostile temperatures, you’ll also encounter mountain zebra, springbok, and ostriches. You may be lucky enough to spot far more elusive predators like brown hyena, black-backed jackal, leopard, or cheetah, seldom seen but known to reside in the reserve. But even stopping to appreciate the smaller critters — scorpions, insects, and various birds that have adapted to life in the desert — offers a refreshing take on the concept of a traditional African safari, especially when washed down with gin and tonic and a desert backdrop or big sky sunset. 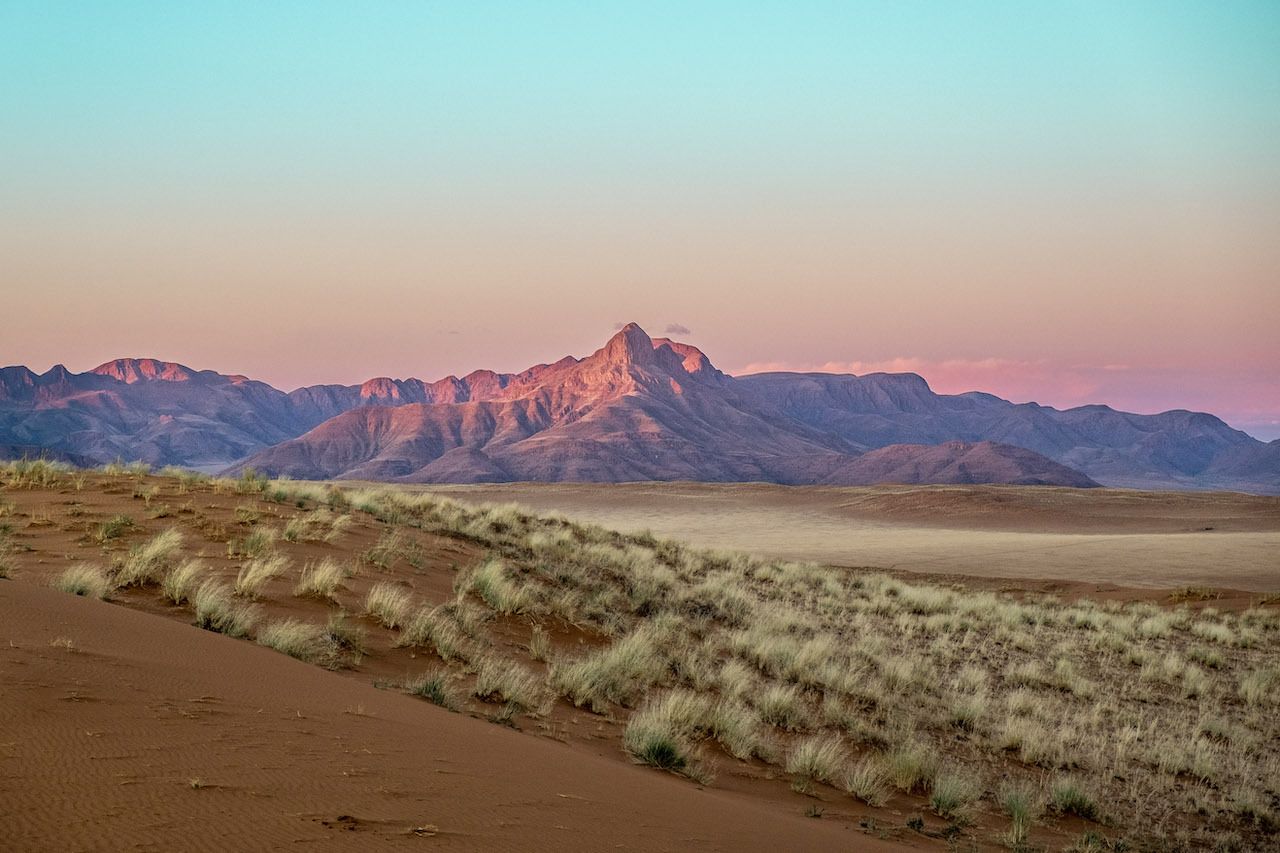 In many ways, though, it’s at night that the NamibRand truly comes to life. The night skies in the reserve are among the darkest in the world — so much so that they’ve earned the rights as Africa’s only Dark Sky Reserve.

All lodges in the reserve must submit to stringent measures that reduce light pollution from lodges and vehicles, and most — including Kwessi Dunes — offer outdoor beds which offer the perfect view of an unparalleled astronomical experience. 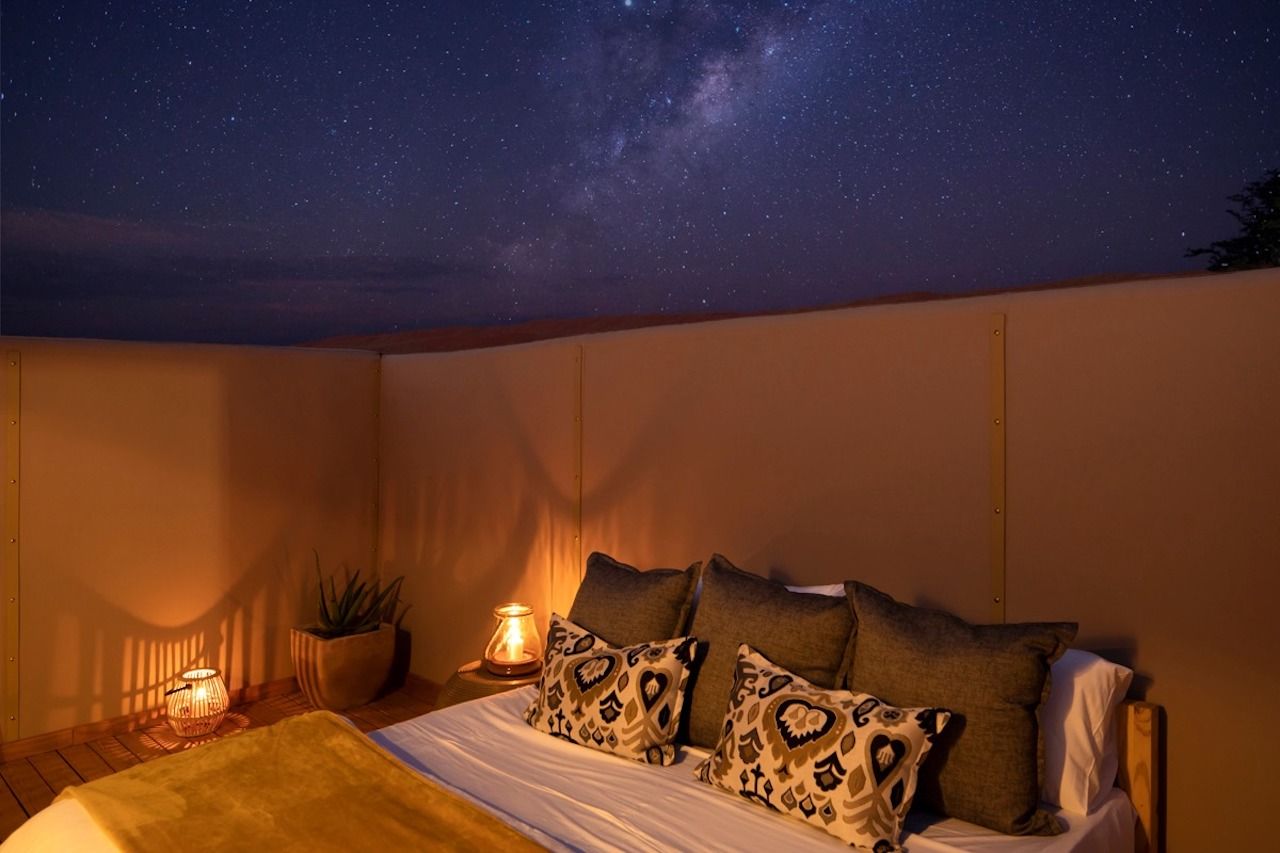 Despite a few drops of rare desert rain and a beaming full moon, it’s here that I chose to spend my last night in the desert. As the fresh night air wafted over me I allowed the silence to envelop me as I reflected on an idyllic trip to the heart of one of the world’s most unique destinations.

Although Namibia’s size and distance may make it seem like a complex place to visit, especially amid a pandemic, it’s actually surprisingly doable. It may be considered a destination perfect for weeks-long 4×4 adventures — but even shorter visits to multi-faceted destinations like the NamibRand deliver spectacular rewards.

And if there’s one thing that a shorter visit to the south-west of the Namib desert does, it’s trigger all kinds of wanderlust that most of us have put on hold for the last year. 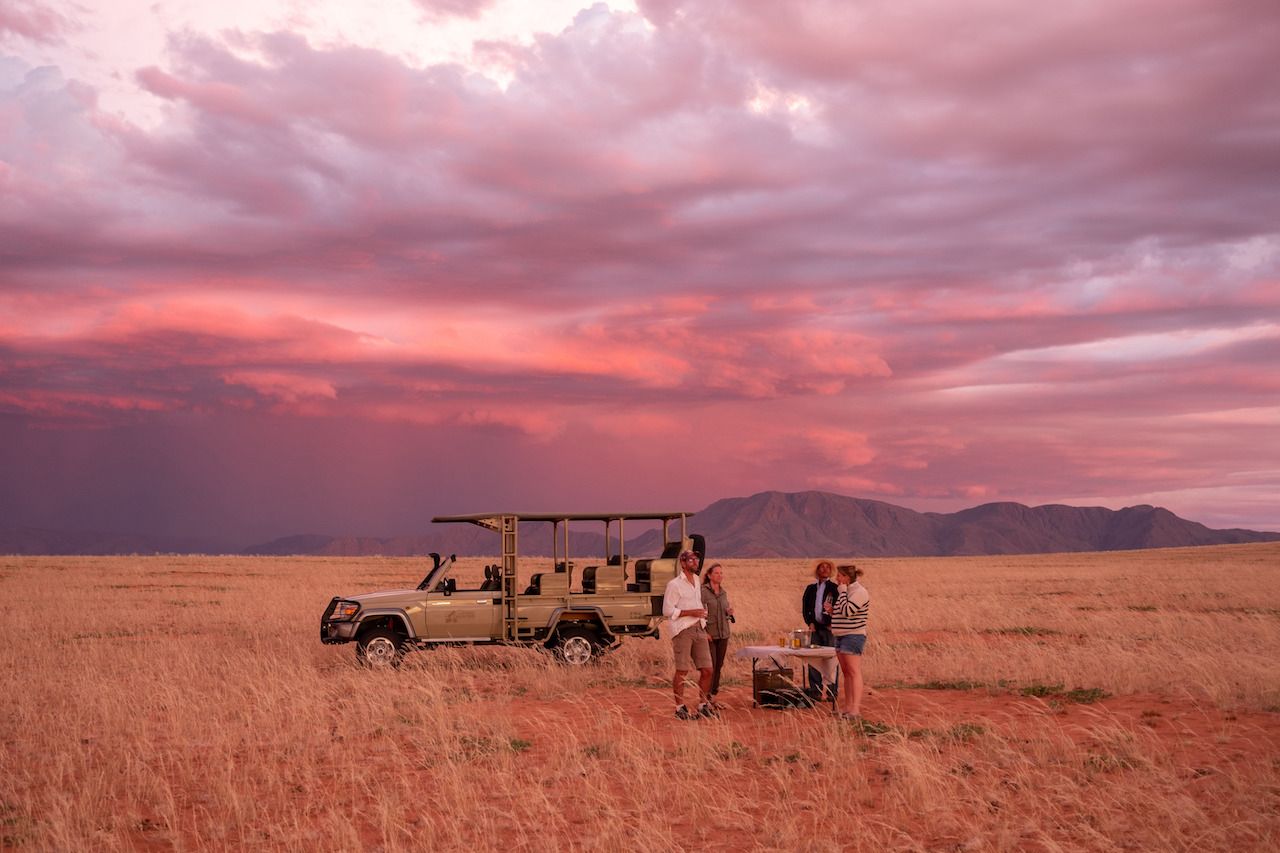 Scenic Air operates regular air transfers into the NamibRand reserve and elsewhere in the country, which is helpful when travel time is limited. Although distances are long, it is also possible to rent 4×4 vehicles in Windhoek and undertake a self-drive trip through the country.

Arriving travelers, including those from the United States, must follow certain COVID-19 requirements. These include presenting with a negative COVID-19 PCR test no older than 72 hours. Namibia does, however, accept tests that are up to seven days old provided travelers quarantine for the week at their respective hotels.

Namibia’s government has instituted various lockdowns, curfews and rules aimed at curbing the spread of COVID-19 in that country. Visit the Namibian Tourism website for updates and critical announcements.

Several companies, including the likes of Wilderness Safaris and Natural Selection, have not increased their prices since the start of the pandemic, and some lodges may offer discounted stays. Personal correspondence with these companies may yield better results than booking directly online.

‘The beginning of normality’: Algarve welcomes back British tourists

Don’t travel to amber list countries, says No 10 despite no ban