A walk through the Portuguese cities of Lisbon or Porto reveals one building after another whose facade is covered in decorative glazed tiles. Even in less affluent neighborhoods, where many structures have been worn down by time, these intricately painted azulejo tiles lend an elegance to the buildings they grace.

Ascending into Lisbon’s higher neighborhoods from the water’s edge on Sante Infante Avenue — the so-called Avenue of the Azulejos — you’d be forgiven for first thinking that a broad, multi-tiered stairwell displays more of these historic tiles. 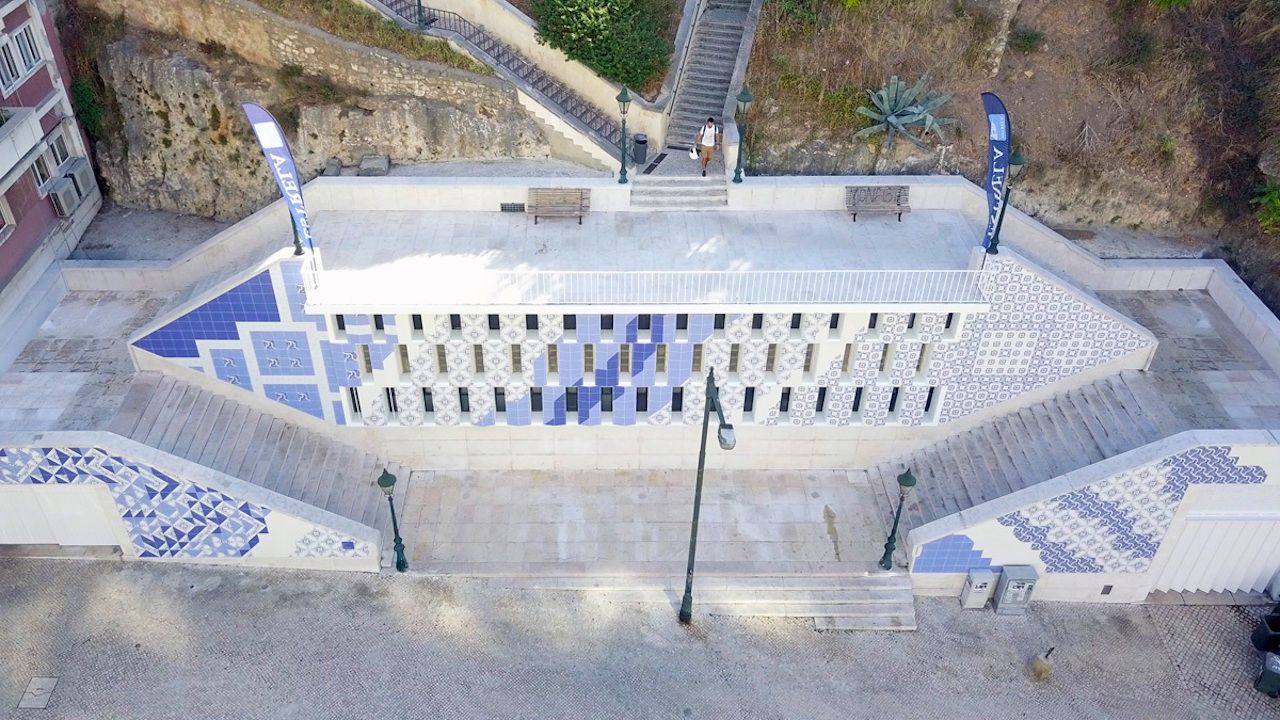 A closer look at the tiles, painted in the most classic azulejo colors of white and deep blue, though, reveals little robotic creatures hiding behind old-style telephone cords and pointy-headed beings emerging from not-quite flower bulbs.

That confusion is very much the intention of artist Portuguese Diogo Machado, whose work is known by the name ADD FUEL, and which can be found throughout his country and in many others as well.

“So in the end, it’s the viewer’s perception that puts it all together,” Machado tells me outside his airy workshop in Cascais, Portugal. It’s a warm day, and Machado’s black T-shirt reveals forearms tattooed with his tile motifs.

Machado explains how the curved lines of his typical designs resemble the iron work that has inspired Portuguese tiles and that floral patterns are a well-known feature of azulejos.

“Then there’s the chromatic itself, which makes it also connected to a very Portuguese style, being white and blue. So it’s a mixture, and that also contributes to this very particular feeling of being something new versus traditional — but still keeping the traditional, but also new. It’s a cycle.”

Should someone skip the opportunity to look more closely at the unusual characters lurking within the seemingly traditional tile designs, that’s okay, he says. “To the untrained eye, it can be that someone looks at my work and says, ‘Okay, it’s Portuguese tile,’ and just moves on. So that’s also interesting. I mean, I can also blend in.”

It’s a fascinating concept, but it would be a shame for that passerby. They’d miss the way that Machado has taken a prized artistic style for which Portugal is so well-known and updated it in a sneakily playful way. 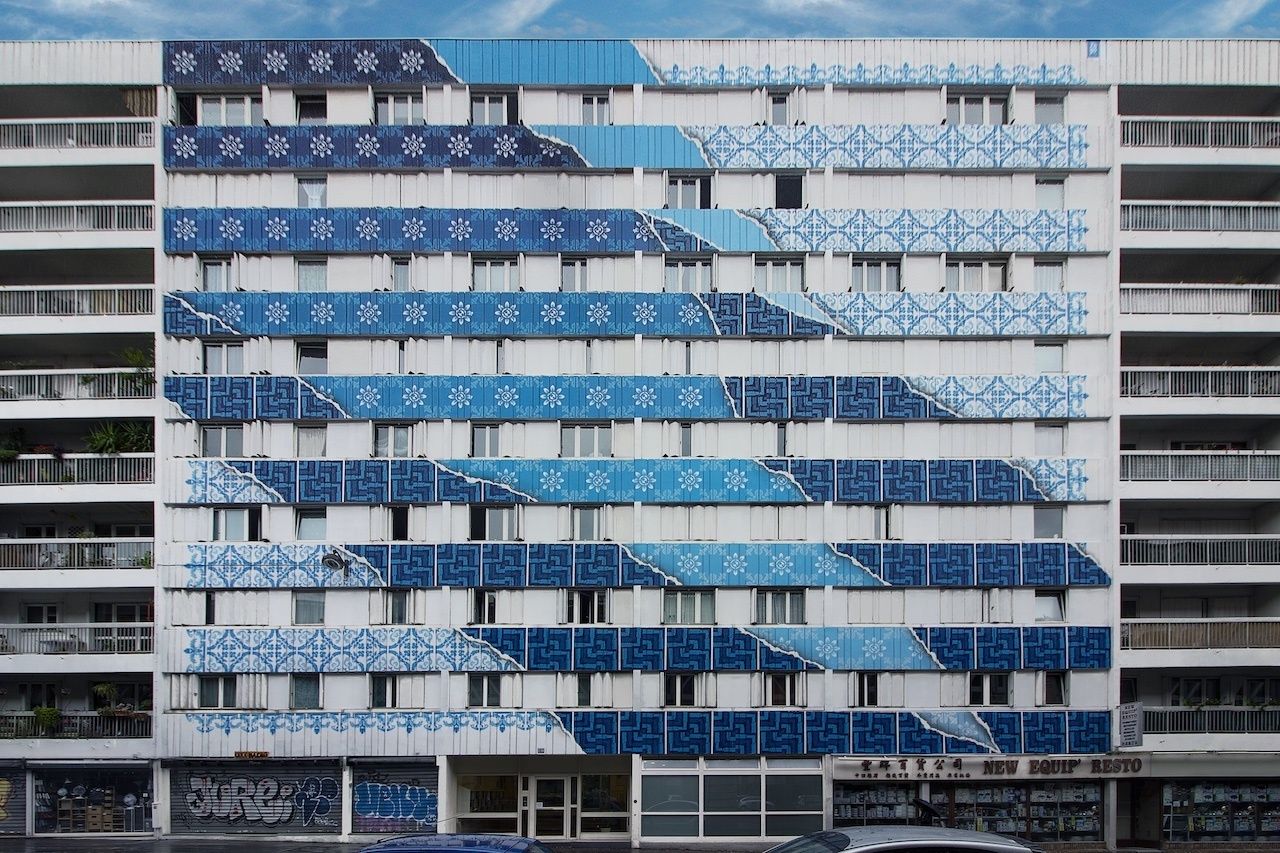 In other works of Machado’s, it’s harder to miss his contemporary take on Portugal’s artistic heritage. He paints massive murals on walls and buildings, where layers of tile seem to peel away to show other tiles behind them. Often, Machado’s creatures are craftily hidden amidst the patterns, although every now and again the creature is exceptionally large.

The tradition that Machado builds upon is the azulejo style that arrived in Portugal via the Islamic Moors who occupied the Iberian Peninsula for hundreds of years. Azulejo comes from the Arabic word for polished stone. After Portugal began earning wealth through its maritime exploits in the 15th century, its king, Manuel I, urged their adoption throughout the country — from floors to exterior facades and interior walls.

While azulejos can be found in many colors, the predominant one is blue, made with cobalt pigments that are byproducts of metal extraction. In fact, the word “azul,” spelled the same but pronounced differently in both Portuguese and Spanish, means “blue.” 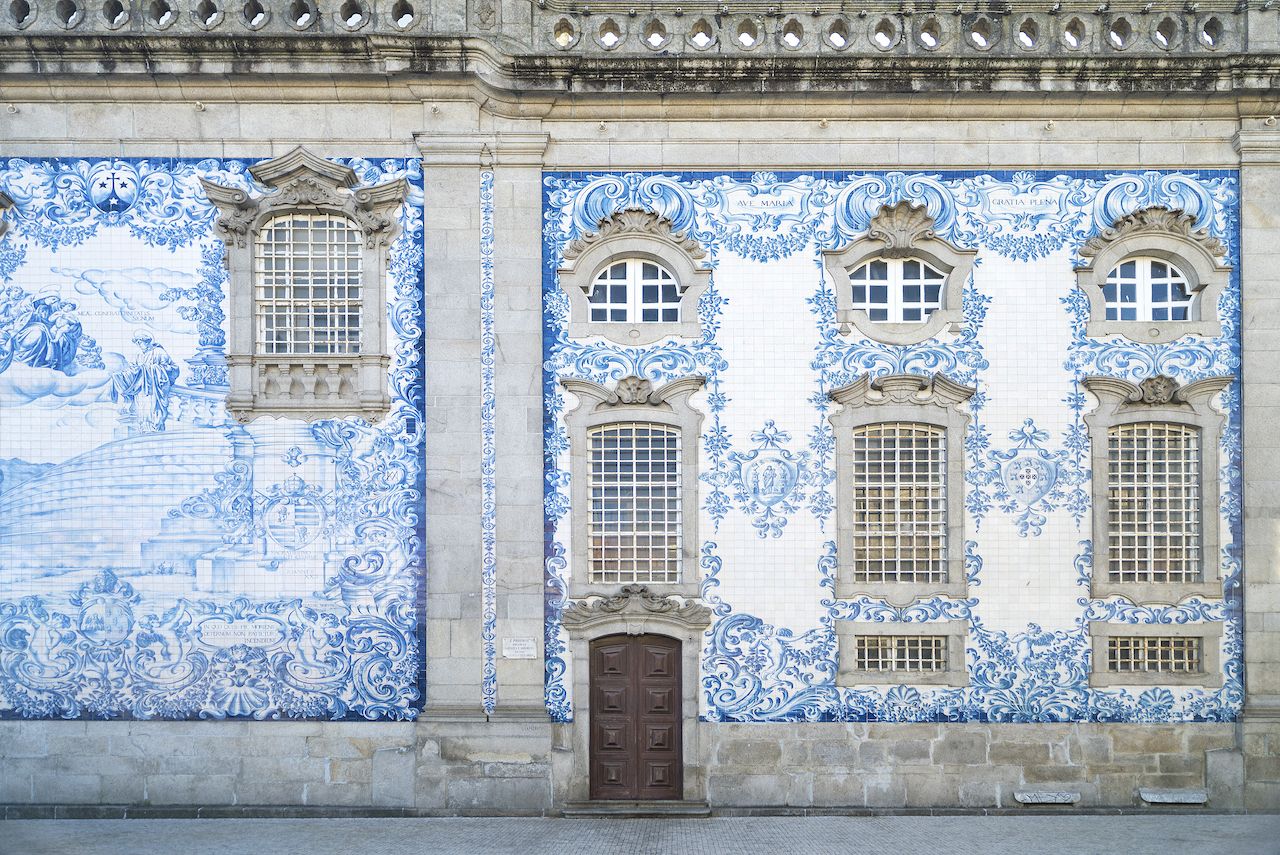 Machado’s interest in the azulejo tradition arose in 2008, after he was asked to design a cover for a building in his hometown of Cascais for the Cascais ArtSpace Festival. Although he’d earned a degree in graphic design, had worked abroad, and had corporate clients in his graphic design work, Machado always continued to populate his notebooks with a world of unusual beings.

When asked to participate in the Cascais festival, he asked himself how he might reflect the heritage of Cascais. He considered Portugal’s cross-stitch lace work and other classic cultural traditions, but decided that since he was covering a building, a tile motif would be most apt.

After the success of the Cascais building, Machado was hooked, soon teaching himself how to paint and glaze tiles in his basement. While he did create some raised tile patterns, he generally prefers the cleaner lines of printed tile. Today, he works with a well-known tile company in Portugal that prints his tiles for him.

And Machado also paints tile patterns on buildings, some of them quite large. For that he creates three-foot-square stencils of his intended patterns. He incorporates hand painting and adding color in the computer to produce the designs that will become the stencils. His work can be seen not just all over Portugal, but throughout Europe, several US cities, and farther afield.

In Macao, Portugal’s former colony west of Hong Kong, Machado painted the exterior wall of a building with interspersed blue and red tiers, mixing a traditional azulejo appearance with a sprightly dragon and a handsome lotus flower — blending Portuguese and Chinese themes.

Machado researches locations beyond Portugal to bring in local elements and adapt his work to that location. For a single story building in Tunisia, he tweaked the shades of blue and emphasized the Islamic patterning that originally influenced azulejos.

“Tunisia has a beautiful and amazing culture connected to tiles and ceramic paint. So what I did was I adapted the colors a little bit to go into more like aqua blues… plus turquoise. So this simple change in chromatics just made all the difference,” says Machado. “And within the patterns themselves, I used more geometric Islamic patterns.”

While Machado is inspired by his country’s artistic heritage, he does not want to impose it in his works done outside Portugal.

“I think the Portuguese have already done a lot of cultural appropriation. And in these conquests throughout all these years when navigating the seas and enslaving people and whatever. I don’t want to do that at all. I just want to bring my art to people,” says Machado. “I try to make it part of the location where it’s painted.” 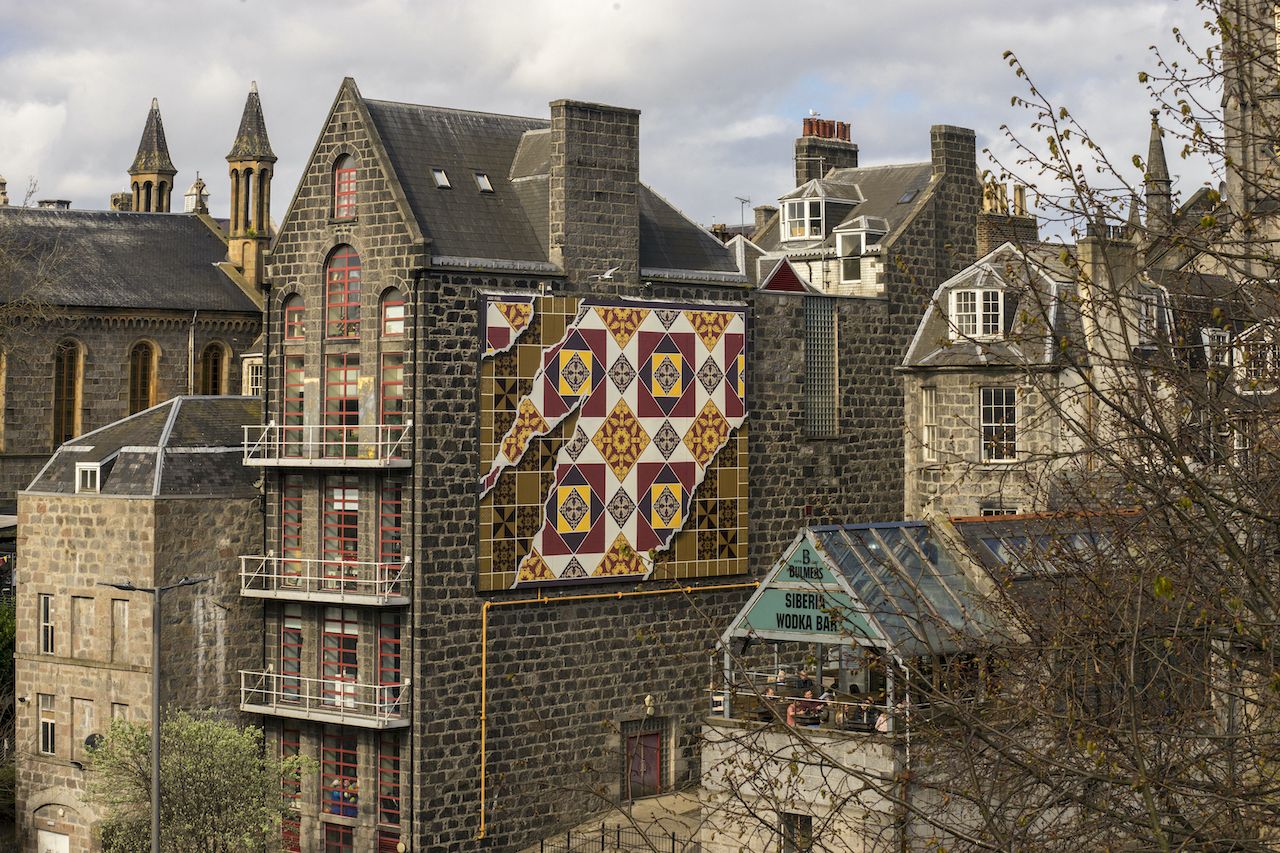 In a work in Aberdeen, Scotland, for example, Machado discovered a centuries-old tilework heritage that is seldom seen today, where the entryway floors in homes were covered in decorative tiles. Machado celebrated that history on the side of a building painted in tones of ochre, chestnut, and maroon. Yet he still kept the mural fresh and modern with his characteristic torn layers. And, of course, a closer look reveals mischievous designs that resemble dog bones and single-eyed robots.

In Norway, Machado incorporated the country rosemåling style of painting onto the exterior of a large, circular stairwell, while a work on the side of a small building in Aruba reveals that the curved lines that look like ironwork are actually snakes and that the floral motifs on the tiles’ corners are in fact sea turtles.

You can see Machado’s work in the United States. Should you happen to be in Denver, dustry Western hues and designs mingle with friendly, cobalt-blue snakes. Among Machado’s Miami works is an unmissable vibrant wall in Wynwood, and you can also find Machado’s works in California, Arkansas, and Massachusetts. 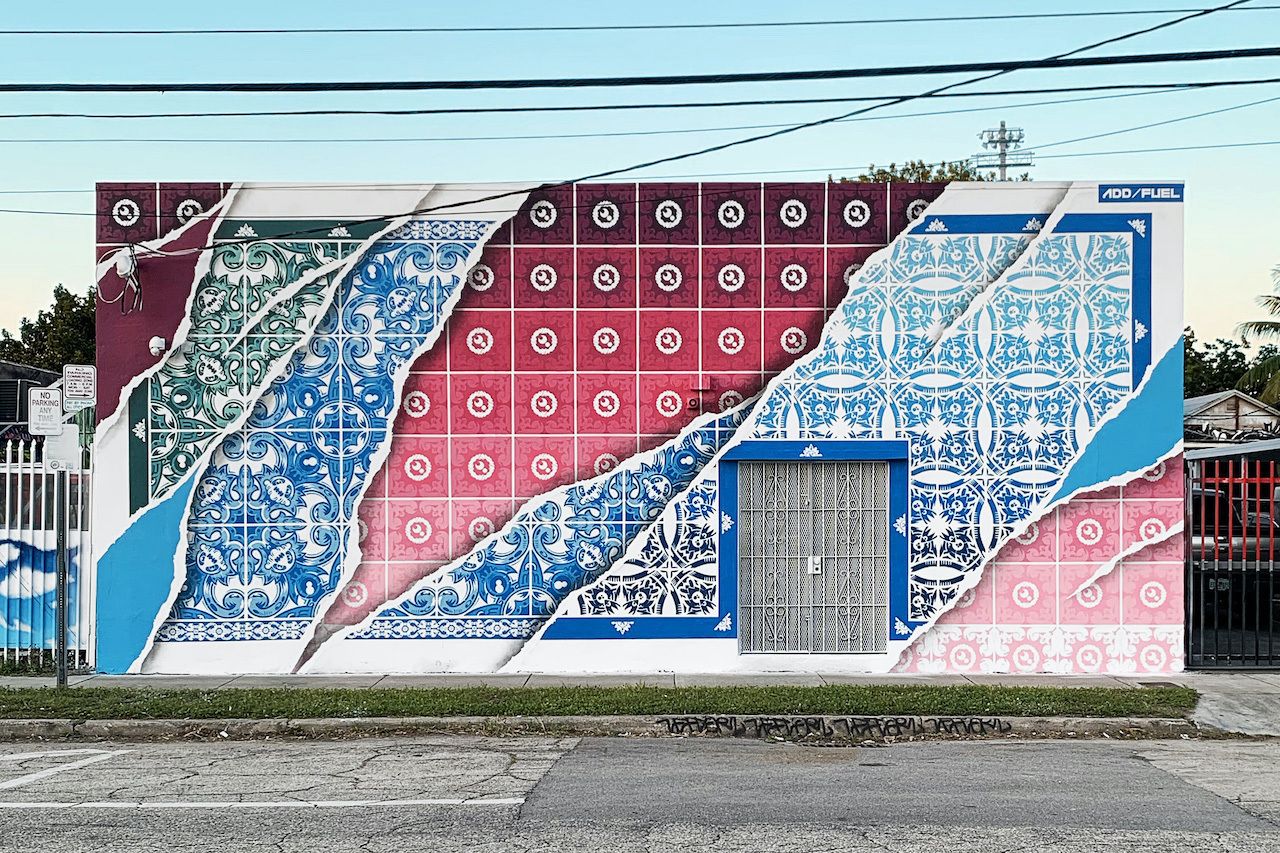 Wherever you go, you’re likely to see how Machado, informed by his own artistic training and style, as well as by his Portuguese roots, has deeply thought about how to embrace and celebrate the heritage of the place where he is painting.

He shows me a collection of spray paint cans in pinks, purples, and whites, saying these have a “Miami 80s vibe” for an upcoming work in Florida. For an earlier work in Miami, he says he turned to the natural world for inspiration.

“I used alligators in the patterns and sea turtles, animals that are present in South Florida. I mean, in some way it connects. The mockingbird [Florida’s state bird] was one of them,” says Machado. “Just as long as I feel connected, I believe that people will in some way feel connected too.”