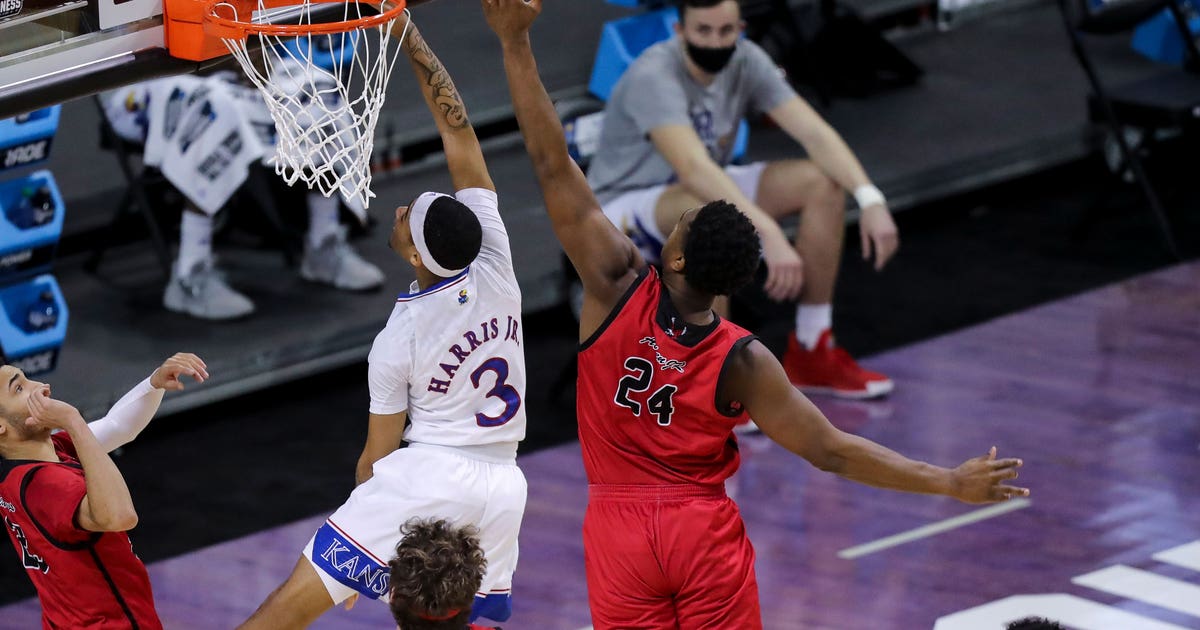 INDIANAPOLIS — David McCormack returned from his COVID-19-caused hiatus just in time to rescue No. 3 seed Kansas.

One day after rejoining the Jayhawks in Indianapolis, the bruising big man piled up 22 points and nine rebounds, helping slow-starting Kansas rally from a 10-point second-half deficit and beat No. 14 seed Eastern Washington 93-84 on Saturday to advance to the second round of the NCAA Tournament.

Ochai Agbaji scored 21 points, Marcus Garrett fought foul trouble to add 20 and Dajuan Harris Jr. had 13 for the Jayhawks (21-8), who advanced to play sixth-seeded Southern California or No. 11 seed Drake for a spot in the Sweet 16.

Tanner Groves scored a career-high 35 points and younger brother Jacob Groves had 23 for the Eagles (16-8), whose third trip to the NCAA Tournament ended just as quickly as the first two — though not without putting up a fight.

The aptly named “Groves Bros” got Eastern Washington off to a flying start. The pair of All-Big Sky forwards combined to score the first nine points of the game and forced Jayhawks coach Bill Self to burn through early timeouts.

Kansas settled down and put together a 17-5 run and suddenly looked again like the big boys out of the Big 12. But Shantay Legans’ motley crew of underrated and overlooked sharp-shooters finished the half on a 24-10 charge.

The Groves kids were at it again. They combined for 3-pointers on three straight trips down floor, then Tyler Robertson added a fourth from the top of the key to give Eastern Washington a 46-38 lead heading into the locker room.

Compounding problems for Kansas: Garrett, one of the nation’s best defenders, picked up his third foul before the break.

Self turned to McCormack to bail the Jayhawks out. Even though he was only expected to play about 10 minutes a half after his bout with COVID-19, the big guy went to work in the paint as if he hadn’t missed a day. He scored their first eight points of the second half, trying to keep Kansas alive until his teammates could find their shots.

They finally did midway through the second half.

Still trailing 63-59, Agbaji threw down a dunk in transition to begin a game-changing 14-3 run. Seldom-used Harris drained back-to-back 3-pointers, McCormack added back-to-back buckets inside, and Garrett — who is hardly known for his outside shooting — hit the first of his three second-half 3s as the Jayhawks took a 73-66 lead.

McCormack, who tested positive for the coronavirus before last week’s Big 12 Tournament, continued to score in the post down the stretch, helping the Jayhawks avoid the same fate that befell top-four seed Ohio State and Purdue on Friday.

Eastern Washington followed the recipe for an upset perfectly: It shot 50% from the field, hit 10 3-pointers, protected the ball and battled the Jayhawks to a standstill on the glass. But the Eagles’ defense let them down in the second half, when Kansas began getting open looks and knocking them down.

Kansas survived without Jalen Wilson and Tristan Enaruna, who continue to be sidelined by COVID-19 protocols. Both could return for the Sweet 16 with seven consecutive negative tests. Wilson is averaging 12.1 points and a team-best 8.2 rebounds while Enaruna, who also missed the Big 12 tourney, averages about 10 minutes off the bench.

The Jayhawks will face the Trojans or the Bulldogs on Monday night for a spot in the regional semifinal.

Photos of the Week: Brewers hit the road for first time in 2021