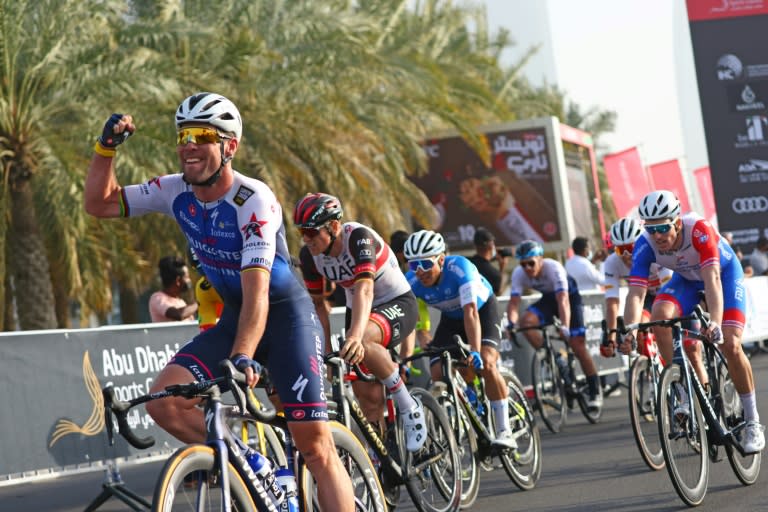 After a day of slow-motion cycling, Mark Cavendish hit top speed in the final 400 metres on Monday to edge Jasper Philipsen and win the second stage of the UAE Tour.

“I knew we could win here,” said Cavendish.

On the second day of the first World Tour race of season, the peloton dawdled through a flat 173km stage that toured Abu Dhabi, with the speed dipping to 20kmh.

At the end, the sprinters’ teams upped the pace.

“A third of the team are first year professionals so this is the first or second race in their career,” said Cavendish. “They were super professional today.

“Their job was to get me to the final with me feeling as fresh as possible and they did it so well that I was able to launch with 300 to 350m to go into a headwind. I’m happy I could hold off Philipsen.”

German Pascal Ackermann, who rides for home team UAE, was just behind in third.

Philipsen, who rides for Alpecin-Fenix, preserved his four-second lead in the overall standings, with Russian Dimitry Strakhov of Gazprom second. Cavendish climbed to third.

“I was missing just a few watts today,” said Philipsen. “I was a bit far back at the end but I just had to go. I knew it was going to be a tough sprint because of the headwind and Mark was the fastest today.”

Strakhov did cut Philipsen’s lead in the points classification after spending a warm, windy day focusing on intermediate sprints.

Tuesday’s stage is a 9km time trial around the village of Ajman which should give Team UAE star Tadej Pogacar a chance to shine.

Bradley Wiggins: ‘Winning in 2012 wasn’t a happy thing – it was more of a box-ticking exercise’

NFL odds: Bet on this surprise team to win their division