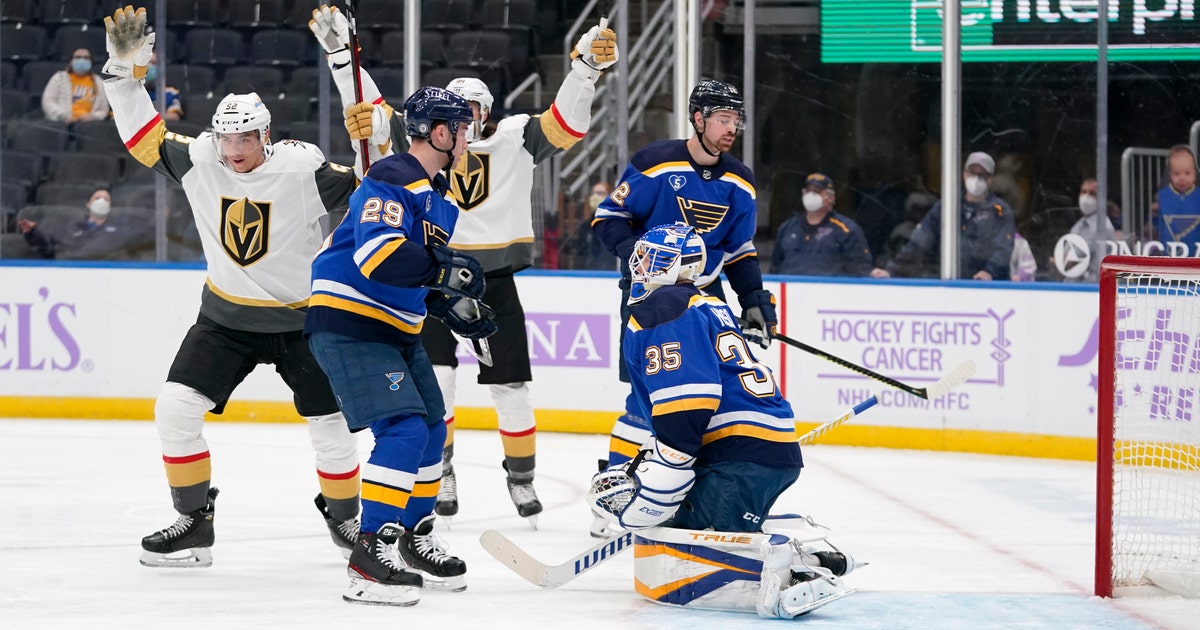 ST. LOUIS — Alec Martinez scored two goals and William Carrier added a goal and an assist, sparking the Vegas Golden Knights to a 6-1 victory over the struggling St. Louis Blues on Monday night.

Vegas coach Pete DeBoer liked what he saw from his team, which had been scuffling in recent games.

“We talked about relaxing. We’re in a good spot,” DeBoer said. “We need to keep the good things we’re doing and fix some things we weren’t doing well. The group came out committed and got rewarded for that.”

Robin Lehner was in goal for the Golden Knights and made 31 saves.

“Robin is important. We’ve got two guys playing on top of their games,” Martinez said. “It’s important goalies keep you in games. It’s great to see them play the way they are playing. It frees us up to make some plays when they play like they have been.”

With the win, the Golden Knights snapped a 0-2-1 skid and raised their overall record to 25-10-2, good for second place in the West. Vegas has won its last four meetings against St. Louis.

’It’s not like we’re letting our foot off the gas here,” Blues forward David Perron said. “We’re really trying to get it done every night. But that doesn’t happen right now. It’s about us sticking together, that’s really what it is. We don’t start losing faith in anything, we really believe in our group. Yes, there’s time, but we’ve got to start finding results.”

The Golden Knights’ scored the first two goals before St. Louis got one in the first period.

Nosek got Vegas going at 6:25 on a tip-in. Standing in front of the net, he redirected a shot from the point by Nick Holden for his first goal this season. Vegas made it 2-0 at 12:45, when Martinez snapped a wrist shot from inside the blue line.

“Coming off the last two games one of the things we didn’t like was not putting the puck in the back of the net,” Martinez said. “We tried to create opportunities. The forwards did a really good job of getting bodies in front of the goalie. It paid dividends.”

St. Louis cut the lead to 2-1 on a goal by Bozak at 17:01. Zach Sanford skated behind the net and passed to Bozak in the slot and his wrist shot beat Lehner.

Vegas blew the game open with four goals in the second period.

The Golden Knights scored two goals 32 seconds apart and added another for three goals in 1:59 and a 5-1 advantage in the second period. Martinez scored on a one-timer at 7:08, followed by Carrier, who tipped in a shot at 7:40. Marchessault scored on a wrist shot at 9:07.

“It was really good tonight,” Marchessault said. “We were finding lanes and we had bodies in front of the goalie. We had a couple of good bounces there. This should be a positive for us the rest of the way.”

That goal chased rookie goalie Villie Husso, who faced 19 shots. Jordan Binnington came in for Husso, who started successive games for the first time with the Blues.

Binnington was touched for Vegas’ final second-period goal at 13:00 when Hague scored on a wrist shot.

The game began a stretch in which the Blues will play eight of their next 10 games at home. St. Louis fell to 4-9-4 at home.

Berbe said he knows what must be done to turn things around.

“Stick together and keep working and I’m going to keep coaching them, that’s how,” Berube said.

Craig Berube on the #stlblues: “They’re probably a pretty unconfident group right now when things don’t go right out there. Things are going to happen, goals are going to go in — you better be a lot mentally tougher than that. That’s weak, weak-minded right now.” pic.twitter.com/vBtrGjpovs

The Blues honored Alex Pietrangelo, the former Blues captain and a big part of the Stanley Cup champion team, with a video tribute and a standing ovation by the limited number of fans in attendance. Pietrangelo made his first return to St. Louis since signing a free-agent contract with the Vegas Golden Knights last October as a player. He missed the games in St. Louis on March 12-13 because of an injury. After the morning skate on a video chat, Pietrangelo said about the experience: “A little different, right? Obviously I didn’t really know where to go this morning coming in the other way, but all good. Obviously an exciting game for me. I didn’t get to come last time, but business as usual for us out there.”

The Knights will remain in St. Louis and play the Blues on Wednesday night.

The Return of a Beloved M.A.C Cosmetics Shade + More Beauty...