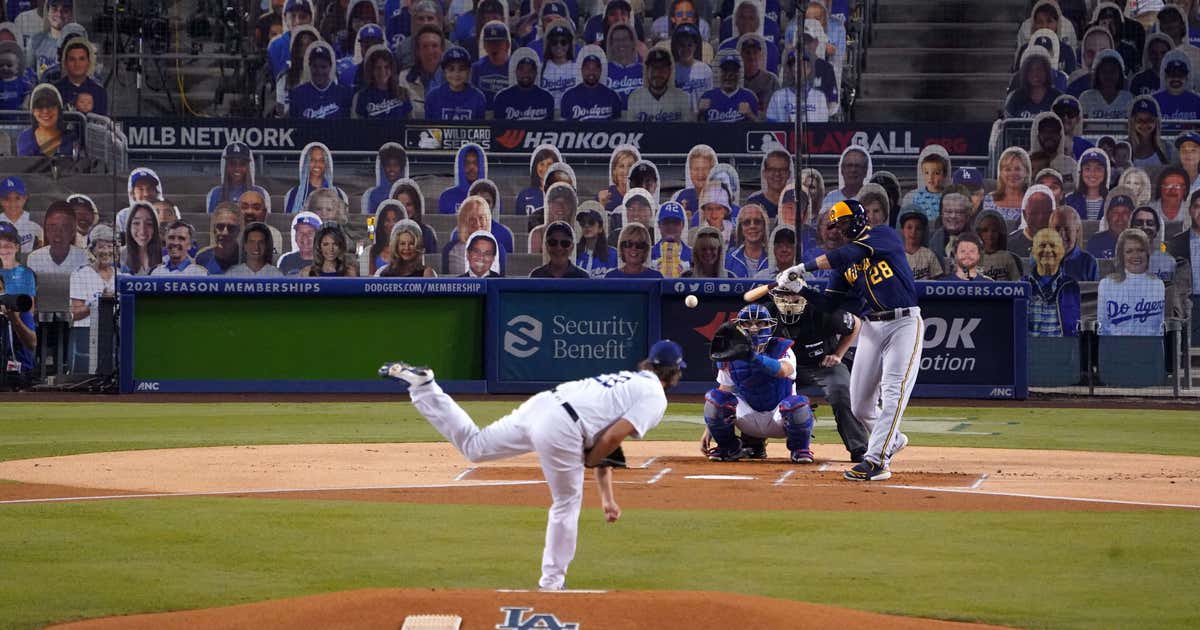 LOS ANGELES — Beat up in the postseason over the years, Clayton Kershaw orchestrated one of his best performances against the weakened Milwaukee Brewers.

Kershaw struck out 13 while delivering eight innings of three-hit ball, Mookie Betts hit a two-out, two-run double in the fifth, and the Los Angeles Dodgers won 3-0 to sweep their NL wild-card series on Thursday night.

“This was a fun night for me,” said Kershaw, who displayed a rare smile on the mound. “Get the postseason off to a good start. It’s a good first step for sure.”

The eight-time West champion Dodgers advanced to the NL Division Series in Arlington, Texas, and will play either the St. Louis Cardinals or San Diego Padres, who meet in a deciding Game 3 on Friday.

Kershaw’s strikeouts were a playoff career-high and the most by a Dodgers pitcher in the postseason since his mentor Sandy Koufax had 15 in Game 1 of the 1963 World Series against the Yankees.

“That was pretty spectacular, for sure,” Betts said. “He gave us all the opportunities in the world to capitalize.”

Kershaw issued his lone walk to Luis Urias in the eighth and promptly picked him off when a diving Urias couldn’t get back to the bag. The Brewers lost their challenge of the call.

“Kershaw was just determined,” Dodgers manager Dave Roberts said. “He gave us all he had and all we needed.”

Kershaw, a three-time NL Cy Young Award winner, showed none of the fallibility that’s plagued his postseason career. He came in with a 9-11 record and 4.43 ERA in the playoffs. A year ago, he came on in relief of starter Walker Buehler against Washington, gave up back-to-back homers and was removed in Game 5 of the Division Series.

This time, he had his way with the beleaguered Brewers. He gave up singles to Jedd Gyorko, Urias and Keston Hiura.

“Offensively, it was a struggle,” Brewers manager Craig Counsell said. “Kershaw, he was exceptional. His slider was as good as I remember it.”

Neither team managed to hit a ball hard as Brandon Woodruff and Kershaw dueled through four innings. Only two of the Dodgers’ nine hitters didn’t strike out during that span; five of the Brewers didn’t.

After leading the majors with 118 home runs this season, Los Angeles managed just one hit through four innings, a single by Austin Barnes, before breaking out in the fifth with a trio of singles.

Cody Bellinger and Chris Taylor had back-to-back singles up the middle with one out. AJ Pollock grounded into a fielder’s choice to third and Urias stepped on the bag to force Bellinger and fired to first. But Gyorko couldn’t handle the throw in time to complete the double play.

“It’s a difficult play. We just didn’t make it,” Counsell said, “and it ended up costing us because they’re a good team.”

Barnes singled with two outs to set up Betts, who doubled sharply down the third-base line. The ball rolled into the left-field corner and three runs scored to chase Woodruff.

Woodruff allowed three runs and five hits in 4 2/3 innings. The right-hander struck out a career postseason high of nine against no walks. As he was walking off the mound after being replaced, Woodruff shouted expletives and gestured angrily in the direction of plate umpire Quinn Wolcott, who tossed him. Woodruff grew upset when a 1-2 pitch to Barnes was called a ball.

“I thought it was a strike,” Woodruff said. “Just the heat of the moment and really wanting to put up a zero, at that moment I knew that that could have been a big turning point with that call. That’s why the reaction was what it was.”

Brusdar Graterol pitched the ninth to earn his first career save for the Dodgers, with veteran closer Kenley Jansen watching from the bullpen. Graterol allowed a single, the Brewers’ fourth hit of the game.

Milwaukee never got above .500 all season and posted a losing record before eking into the expanded postseason as the No. 8 seed.

“Every time your season comes to an end, it’s a bummer,” said Christian Yelich, who was 0 for 4 with two strikeouts. “It’s a bummer because it’s never the same team the next year. We went through a lot as a group. I’m definitely proud of the guys.”

As if the Brewers didn’t have enough injuries already, catcher Jacob Nottingham got hurt and left the game in the sixth.

Slugger Ryan Braun sat out the game with a strained oblique that he originally injured last weekend and re-aggravated crashing into the right field wall in a 4-2 loss in Game 1 on Wednesday. Milwaukee played the series without its top pitcher Corbin Burnes and top reliever Devin Williams, who are both hurt.

The Dodgers had the best record in baseball at 43-17 during the shortened 60-game season and earned home-field advantage throughout the postseason. But from here on out, they’ll be playing their games in Texas. That’s where the NL Division Series and NL Championship Series will be contested, as well as the first neutral site World Series.

Justin Turner wore an earpiece during Game 1 for ESPN’s broadcast. He was seen fiddling with it while playing third base, trying to keep it in his ear. Roberts found out about the arrangement an hour before gametime. “I’m not a fan of it,” Roberts said. “Going forward, I don’t want our guys to do that.” He said it was a decision Turner made on his own.

“I wouldn’t mind if Yelich did it or any team that we’re playing,” Roberts said.

Brewers: Host Oakland in their spring training opener on Feb. 27.