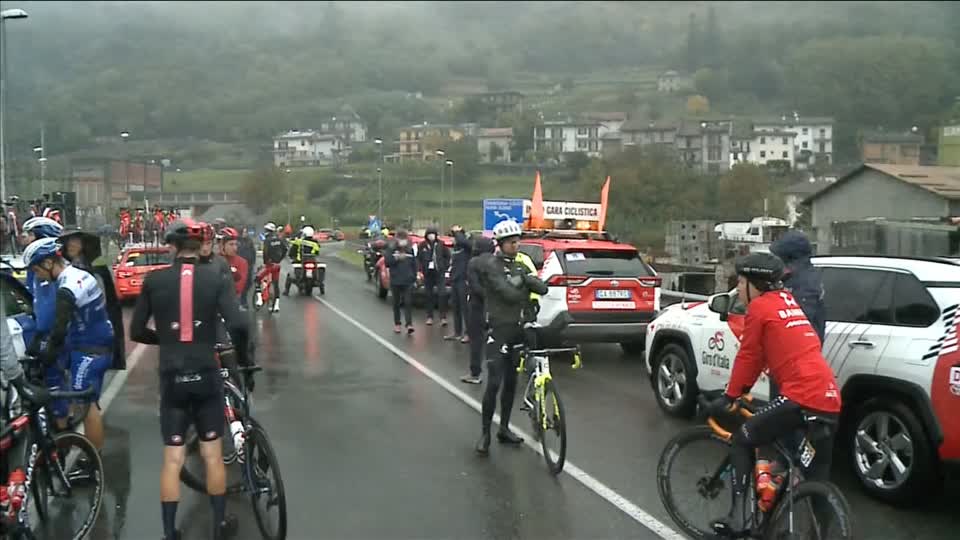 2. MOTORBIKE RIDER INDICATING TO RIDER THAT THE STAGE HAS BEEN STOPPED

4. VARIOUS OF RIDERS STOPPED STANDING IN THE RAIN AND TALKING (3 SHOTS)

5. KELDERMAN SITTING IN A CAR

6. CONVOY OF BUSES AND CARS HEADING TO THE NEW STARTING POINT OF THE STAGE AT ABBIATEGRASSO (3 SHOTS)

7. RIDERS GATHERED FOR THE RESTART

STORY: Czech Josef Cerny won the Giro d’Italia’s 19th stage which started amid chaos and was halved in length on Friday (October 23) following a protest by the riders against the conditions.

Cerny (CCC) broke away from the leading group around 22 kilometres from the end of the 123-kilometre stage and managed to hold onto his lead until the finishing line in the town of Asti to claim the biggest win of his career.

Victor Campenaerts’ late attack was in vain as he finished second.

The stage was scheduled to run 258 kilometres from Morbegno to Asti but, shortly before the start, the riders protested about racing so far in wet conditions one day after a brutal mountain stage.

After organisers agreed to their demands, the race started as planned but, after eight kilometres, the riders got on their team buses and were taken to a new starting point at Abbiategrasso.

Dutchman Wilco Keldermen kept the maglia rosa after finishing with the peloton which crossed the line nearly 12 minutes behind Cerny.

There are two stages to go in the race which finishes in Milan on Sunday (October 25).