Ohio State took apart Indiana without two of its best players on the field in running back TreVeyon Henderson and wideout Jaxon Smith-Njigba.

The Buckeyes played a little more than an entire half of football with just one scholarship running back after Miyan Williams was forced to leave the game. The Buckeyes defense, however, notched nearly as many sacks of Indiana quarterbacks (five) as points allowed in the third quarter (seven).

Meanwhile, the Michigan Wolverines have worked hard to convince everyone outside of Columbus, Ohio, that they can repeat as Big Ten champions. Blake Corum put together another monster day with 28 rushes for 168 yards and a TD, while the Michigan defense allowed just three points in a win against the Nebraska Cornhuskers.

Now, all eyes are on Ohio State and Michigan, as both stay on course to meet as unbeatens for the first time in 16 years on Nov. 26.

Over in the Pac-12, meanwhile, things were cast into turmoil Saturday as two teams with inside tracks to the conference championship game — Oregon and UCLA — both lost at home. 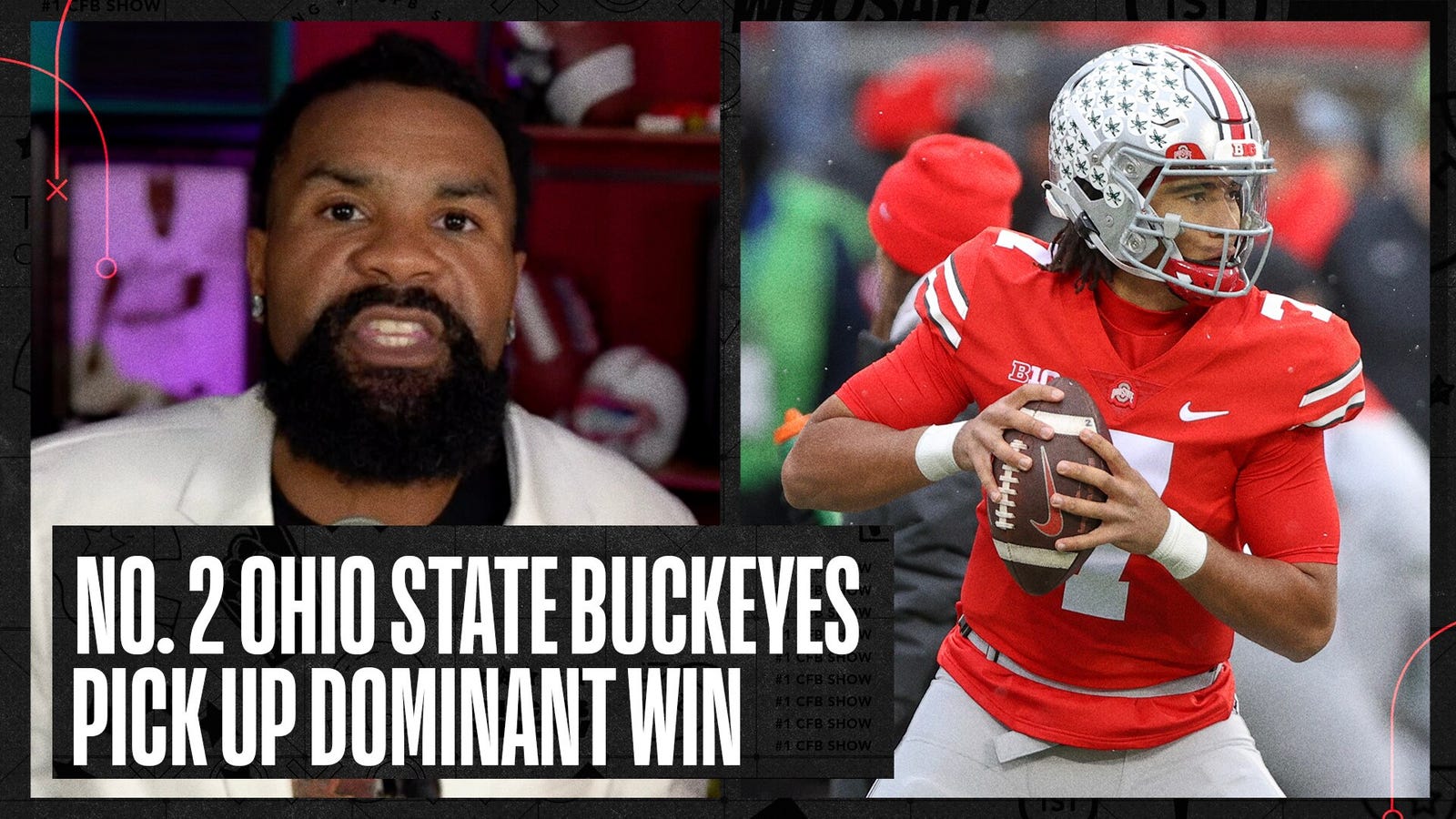 RJ Young reacts to C.J. Stroud and Ohio State’s impressive victory over the Indiana Hoosiers, with an eye ahead toward the Big Game vs. Michigan.

The defending national champions played like it. Georgia quarterback Stetson Bennett outdueled one of the most prolific passers in league history in Will Rogers, completing 25 of 37 for 289 yards and three TDs, with two INTs. Rogers completed 29 of 51 for 261 with a TD.

The Buckeyes comported themselves like a CFP team. Ohio State quarterback C.J. Stroud threw for 297 yards with five TDs in a win where TreVeyon Henderson and Jaxon Smith-Njigba were unavailable, and running back Miyan Williams was carted off with a first-half injury.

Williams rushed for 147 yards and TD on just 15 carries. The Buckeyes at full strength would prove a handful for the Wolverines.

With the win, the Wolverines moved one week closer to an undefeated showdown against the Buckeyes for Big Ten East supremacy. If the Buckeyes and Wolverines remain perfect through Week 12, it will be the first time since 2006 that they’ve both entered their matchup undefeated.

The Horned Frogs responded to being a seven-point underdog to the Longhorns by holding the UT offense without a TD and frustrating former No. 1 overall recruit and Ohio State quarterback transfer Quinn Ewers. Ewers finished just 17 of 39 for 171 yards, while 1,000-yard running back Bijan Robinson ran the ball just 12 times for 29 yards.

The Horned Frogs clinched a spot in the Big 12 title game and are three wins away from playing in the CFP.

RJ Young reacts to No. 4 TCU’s win over Texas, and explains why this game was so vital for TCU to win.

On Senior Day, the Volunteers shook off their loss to the defending national champions with a school-record 724 yards in a dismantling of the Tigers.

The win came at the cost of running back Travis Dye, who had been the Trojans’ most consistent offensive performer not named Caleb Williams. His lower leg injury will force him to miss the remainder of the season and vault Stanford transfer Austin Jones into the feature back position ahead of a Pac-12 showdown against the UCLA Bruins.

Behind one of the best defensive performances by any player this season, Harold Perkins (four sacks, two forced fumbles, one pass breakup) and the Bayou Bengals moved one step closer to securing the SEC West title in Brian Kelly’s first season in Baton Rouge.

The Tide fought back from a double-digit deficit — twice — to prevail over Ole Miss. Alabama demonstrates the strength of the SEC as it is just the fourth-best team in the conference but among the top 10 in this ranking.

The win secures UNC’s spot in the ACC Championship Game with a New Year’s Six bowl appearance on the line. Drake Maye continued his hunt for a Heisman ceremony invitation with another outstanding performance.

Dan Lanning made the curious decision to go for it on fourth-and-1 with 1:34 left to play on the Oregon 34-yard line in a 34-34 game — and with his backup quarterback behind center. Running back Noah Whittington slipped and fell in the backfield, and that gave the Washington Huskies the chance to kick the game-winning field goal, ruining the Ducks’ CFP chances.

RJ Young reacts to Washington’s 37-34 victory over Oregon and discusses why the Huskies shouldn’t be overlooked.

Quarterback DJ Uiagalelei got back on the good foot with 217 total yards and two total TDs in their quest to keep pace with North Carolina as the two best teams in the ACC. Like the Tar Heels, the Tigers have clinched a spot in the conference title game.

Zach Charbonnet’s huge game — 23 carries for 182 yards and three touchdowns — was all for naught as the Bruins couldn’t slow down the Wildcats.

With the win, Penn State kept its Rose Bowl hopes alive. Freshman phenom Nick Singleton rushed for 122 yards with two TDs, but the highlight of the game was Nittany Lions coach James Franklin pumping out 15 push-ups on the sideline after he picked up an unsportsmanlike conduct penalty.

The Rebels have lost just two games this season. This one marked the double: the SEC West champion in 2021 and 2022 are the only teams to beat the Rebels this season. 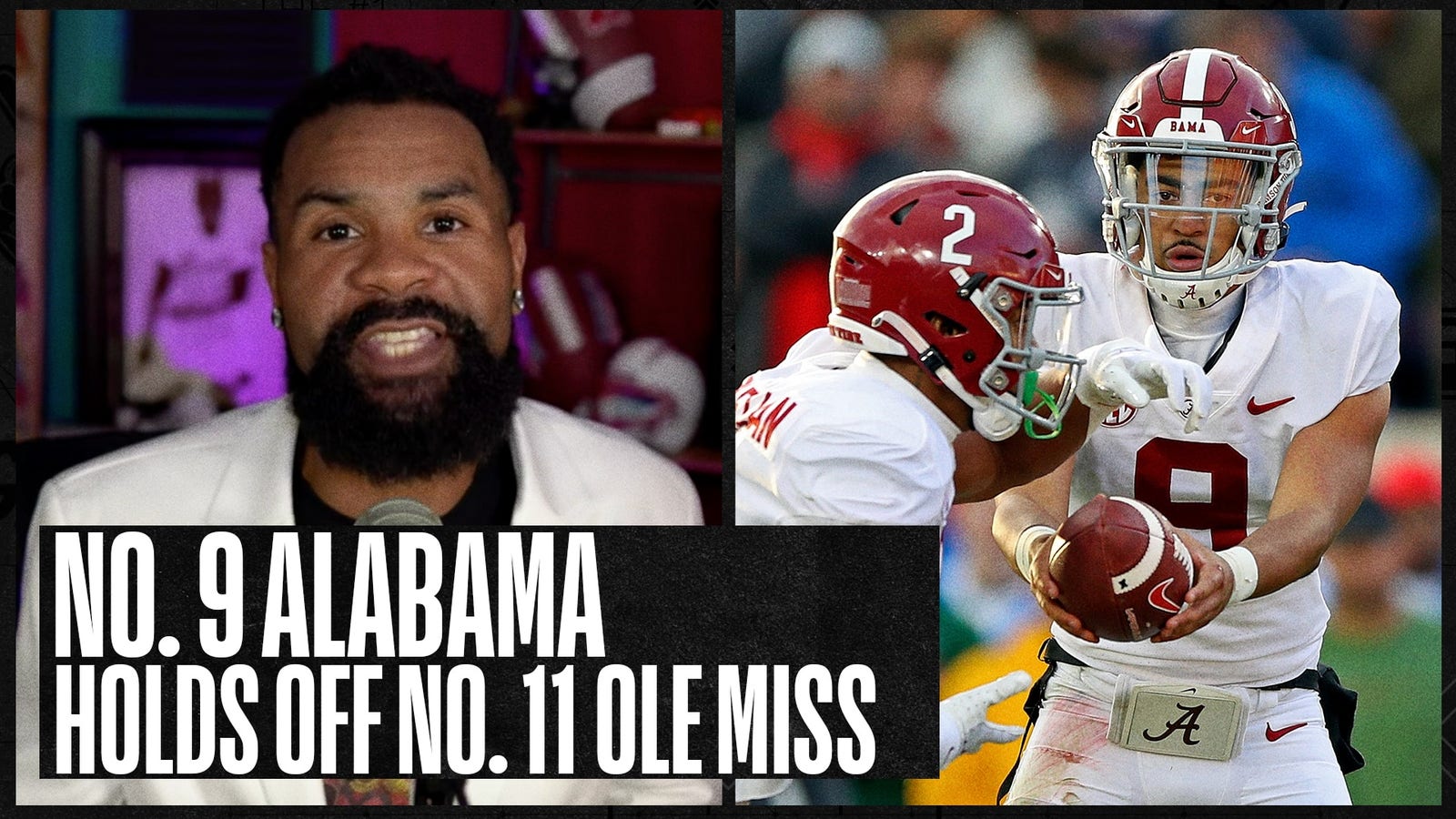 RJ Young discusses how Alabama’s defense rose to the occasion in a victory over Ole Miss.

After giving up nearly 600 yards of offense and over 300 yards rushing to Oregon, the Husky defense came up big on fourth-and-1 with a stop on the UO 34-yard line. Peyton Henry kicked the game-winner from 43 yards out to earn the win.

UCF used the opportunity to vault into position to earn the at-large spot for a New Year’s Six bowl appearance in the Cotton Bowl — provided the Knights can win the American Athletic Conference title.

Drew Pyne completed 17 of 21 passes for 269 pass yards with five total TDs in the win, but the play of the game came on an underthrown pass from Pyne that wideout Braden Lenzy pinned to a Navy DB’s back to complete a remarkable catch.

The Wildcats held BU scoreless in the second half. Super-sub Will Howard came off the bench again — completing 19 of 27 passes for 196 yards and three TDs —  to lead K-State into sole possession of second place in a congested race for the last spot in the Big 12 Championship Game.

Mike Elko might win ACC Coach of the Year for what he’s been able to do at Duke in Year 1 — seven wins two weeks before Thanksgiving at a program that hasn’t won seven in a season since 2018 and could still earn just its second 10-win season in school history.

FSU quarterback Jordan Travis and running back Trey Benson powered the Noles past the Orangemen. For Benson, he recorded his third 100-yard rushing performance in a row and fourth of the season while Travis threw three TD passes.

The Gophers rode running back Mohamed Ibrahim yet again to a decisive win. Ibrahim had 178 rushing yards and three TDs on 36 carries against the Wildcats. He’s amassed 1,083 rush yards this season. Ibrahim has rushed for at least 100 yards in every game he’s played since Oct. 24, 2020 — an 18-game streak. 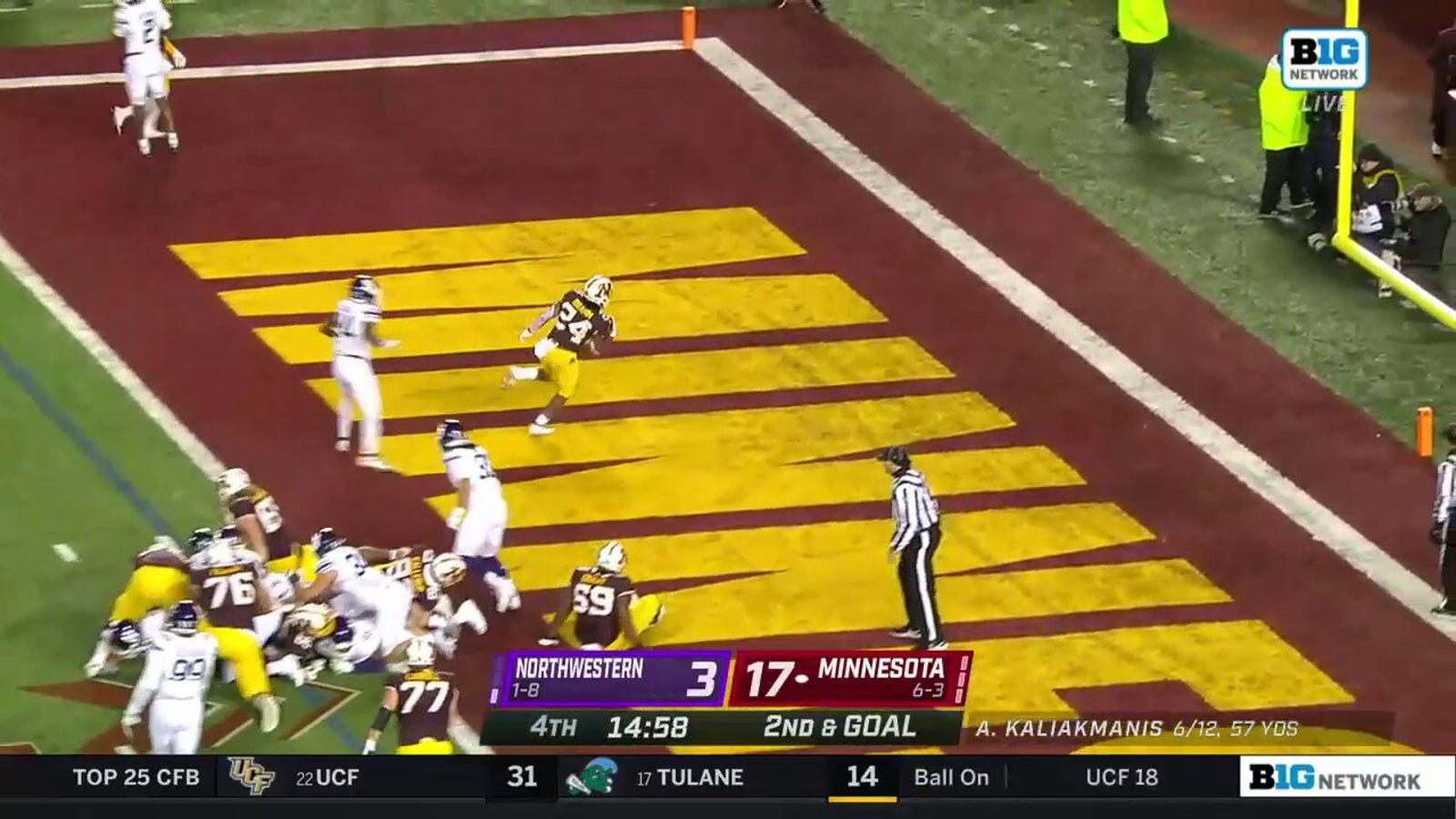 Minnesota’s Mohamed Ibrahim scored his third touchdown of the game against Northwestern on Saturday.

Playing without star quarterback Grayson McCall, the Chanticleers managed a gutsy win against Golden Eagles to clinch the Sun Belt East Division title and keep themselves in the hunt for that coveted Group of 5 at-large bid to the Cotton Bowl.

The loss is a setback for the Green Wave’s NY6 bowl aspirations and means Tulane fell into a three-way tie for first place in the American with Cincinnati and UCF. And UCF holds the tiebreaker over Cincy and Tulane.

However, Tulane and Cincy finish the regular season against each other and the winner of that game will get a second chance to defeat UCF.

The Trojans have won seven in a row, suffering losses to Appalachian State — who beat Texas A&M on the road — and a top-25 Ole Miss squad. With two games to play, they can clinch the Sun Belt West Division with a win against Louisiana-Monroe next Saturday to set up a delicious Sun Belt title game against the Chants in December.