Ohio State hosts Michigan on Saturday in a game that will act as a play-in for the College Football Playoff.

The programs will both be 11-0 when they meet for the first time since 2006 (noon ET on FOX and the FOX Sports App). The last time that happened, the winner, the Buckeyes, played in the national title game and Troy Smith won the Heisman Trophy.

This season, Ohio State quarterback C.J. Stroud or Michigan running back Blake Corum could win the award with a dominating performance in “The Game.”

RJ Young reacts to No. 2 Ohio State off Maryland in a tense Week 12 contest.

The Georgia defense held the Wildcats scoreless for three quarters and held up late as UK tried to mount a late surge. The Bulldogs have just one game left before their date with LSU in the SEC Championship as they continue their quest to defend their national title and complete their first undefeated season since 1980.

Ohio State defensive end Zach Harrison sacked Maryland quarterback Taulia Tagovailoa twice in the waning seconds of the Buckeyes’ victory. His second sack led to a forced fumble linebacker Steele Chambers returned for a TD and created what would be a 13-point margin of victory in a game OSU flirted with losing.

If the Buckeyes expect to defeat Michigan at the Shoe on Saturday, they’ll have to start fast and finish just as strongly.

Without the presence of Heisman candidate Blake Corum for most of the second half, the Wolverines grinded out their 11th win against a stout Illinois team at the Big House.

Michigan improved to 41-1 when leading at the half under Jim Harbaugh — one more reason for the Buckeyes to start fast if they expect to win on Saturday.

Sonny Dykes rolled the dice. On third-and-7 with 37 seconds left, down two on the Baylor 26 with no timeouts, he called a run play for running back Emari Demercado. He was downed in bounds, and Dykes hustled the field goal unit onto the field with the clocking ticking down.

From 40 yards out, Griffin Kell nailed his kick and the Horned Frogs improved to 11-0 for the first time since 2010 with the win. 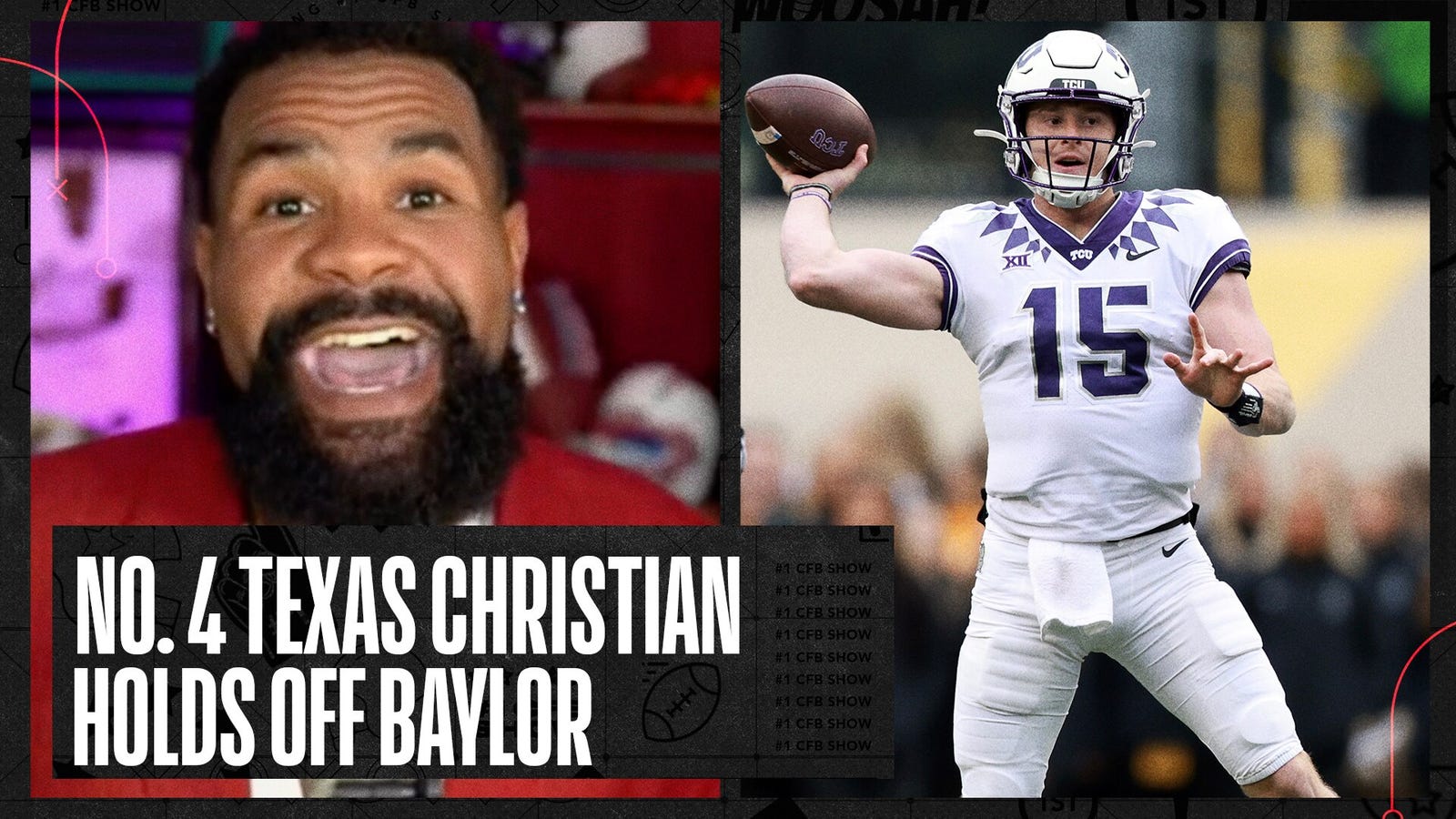 RJ Young talks about the no. 4 Texas Christian Horned Frogs stunning the Baylor Bears 29-28 with an amazing two-minute drive and field goal to win with no time left.

With Tennessee’s loss, the Trojans look to be just two wins away from assuring themselves of their first appearance in the CFP — and the Pac-12’s first since 2016. Quarterback Caleb Williams continued to play like a Heisman candidate, completing 32 of 43 passes for 470 yards with two TDs and an INT.

The Trojans clinched a spot in the Pac-12 championship game ahead of a delicious November non-conference bout against Notre Dame.

South Carolina’s Spencer Rattler looked like a Heisman winner against the third-best team in the best league in the sport. He finished his best day as a Gamecock — of his career — with 438 yards through the air and six TDs to put a coffin nail in the Volunteers’ CFP hopes. 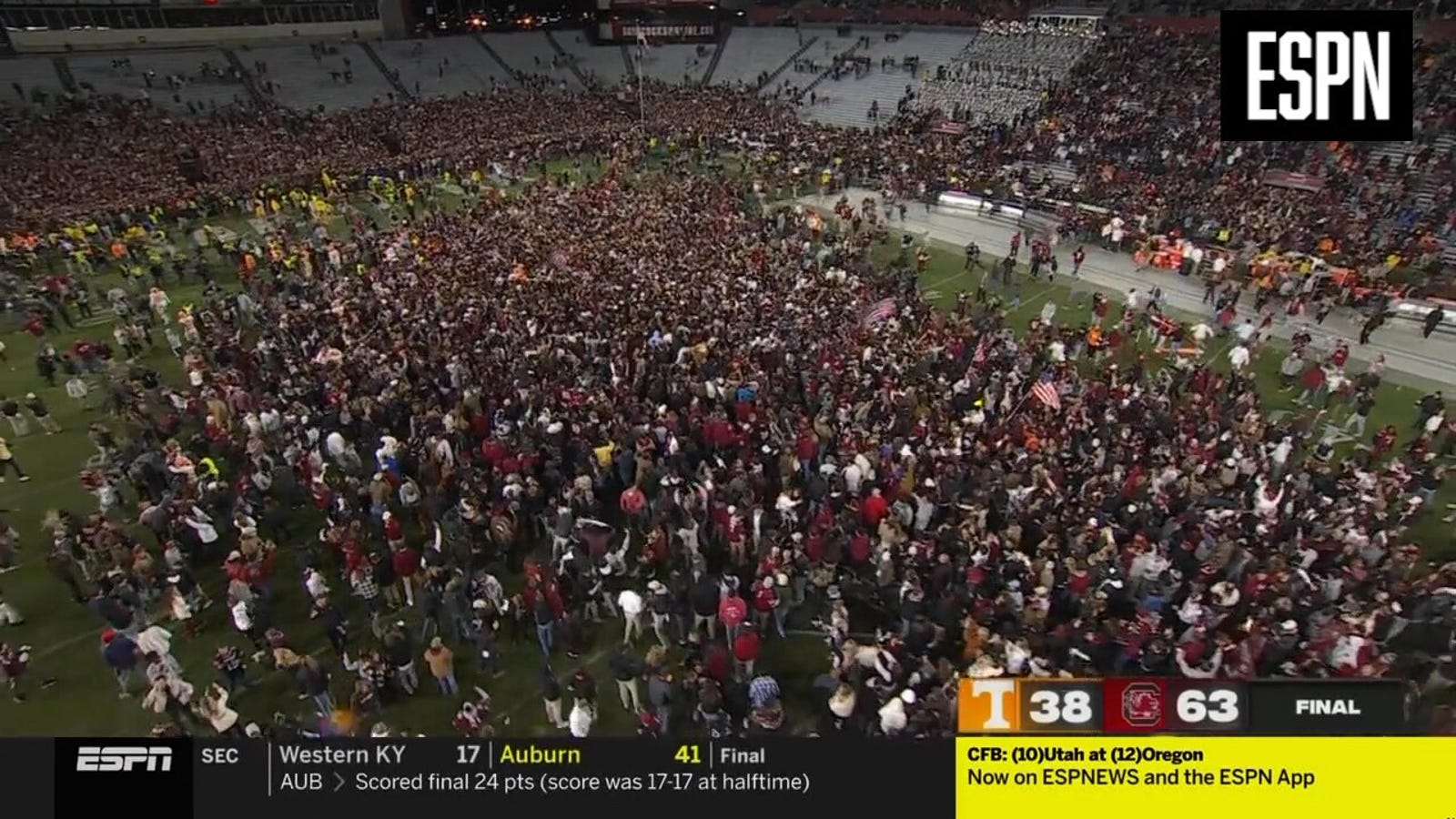 Fans stormed the field after the South Carolina Gamecocks beat the No. 5 Tennessee Volunteers on Saturday.

LSU quarterback Jayden Daniels completed 22 of 29 passes for 297 pass yards with a TD in a lopsided win against the Blazers. With the division title clinched, the Tigers will look to get past Texas A&M and then unseat defending national champion Georgia for a chance to earn an invitation to the CFP for the first time since 2019.

The Crimson Tide performed exactly how you’d expect an SEC power to against an FCS opponent.

Oregon remains in the hunt for the Pac-12 title game with this win. With a victory against a charging Oregon State, the Ducks will have a chance to win the Pac-12 Championship against the best team in the conference they’ve yet to play — USC.

The Tigers wrapped up an undefeated regular season — Notre Dame doesn’t count toward their ACC tally — and are set for what should be a fun showdown for the Palmetto State Championship against South Carolina to finish the regular season, followed by the ACC title game against North Carolina.

The win was ND’s 28th-straight win against an ACC opponent and the fifth straight in which the Fighting Irish have scored at least 35 points.

The firm of Kaytron Allen and Nick Singleton combined for 189 rush yards on 20 carries with a TD in a lopsided win that keeps the Nittany Lions’ Rose Bowl hopes alive.

The Huskies racked up 575 yards of offense — including 280 on the ground — to secure their first nine-win season since 2018 and have a chance to win 11 games for the first time since 2016 — when they made the CFP.

The Yellowjackets trailed 17-0 in the first half and scored 21 unanswered to knock the Tar Heels out of the CFP race.

The Wildcats moved closer to securing the remaining spot in the Big 12 title game with the win. Quarterback Will Howard continued his outstanding form completing 19 of 27 passes for 294 yards with two TDs and an INT.

If the Wildcats beat Kansas on Saturday, they’ll get a chance to play TCU for the Big 12 Championship.

Though the Rebels lost, Ole Miss running back Quinshon Judkins might’ve locked up the SEC Player of the Year Award and is a shoo-in for every Freshman All-American Team in the sport. He rushed for 214 yards on 24 carries with a TD.

Judkins was outdone, however, by Arkansas running back Raheim Sanders, who finished with 232 yards on 24 rushes with three TDs.

Since losing 34-28 to Clemson, the Seminoles have averaged better than 43 points per game and have scored at least 35 points in seven games this season — not including their 24-23 win against SEC West Division champ LSU.

A valiant effort from fifth-year starter Dorian Thompson-Robinson wasn’t enough for the Bruins to knock off of their city rival. He finished 23 of 38 for 309 pass yards with four TDs and four turnovers against the Trojans.

USC wins wild one vs. UCLA 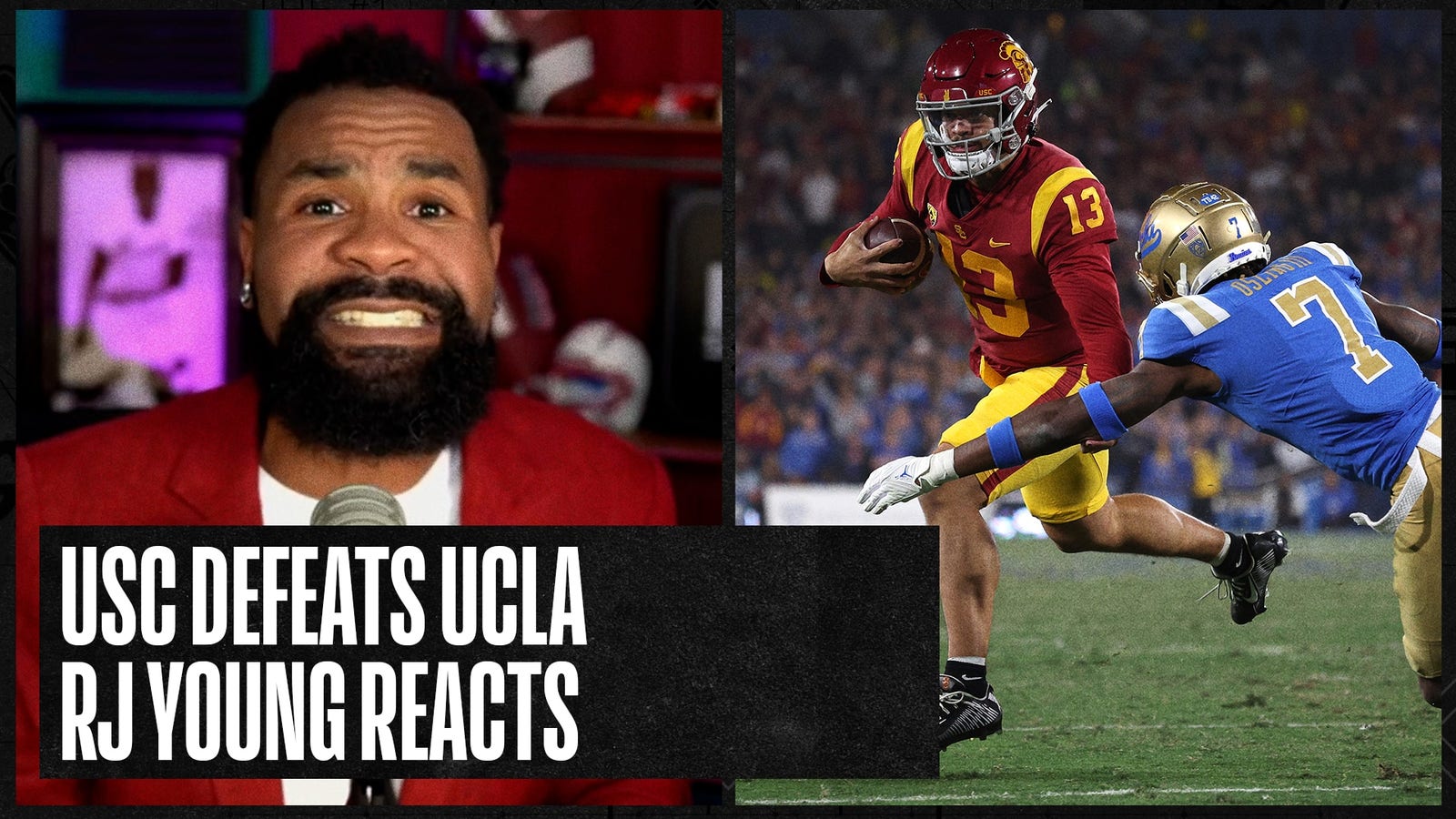 RJ Young reacts to the No. 7 USC Trojans defeating the No. 16 UCLA Bruins in Week 12.

The Utes were eliminated from Pac-12 title contention with their loss to the Ducks. However, they’re still in contention to secure their third 10-win season in four years.

The win marked the Beavers’ first season with at least eight wins since 2012. With a win against Oregon and in their bowl game to follow, the Beavers could reach 10 wins for the first time since 2006.

Bijan Robinson rushed for a career-high 243 yards against a bowl-bound Kansas, which means if the Longhorns beat Baylor on Friday and K-State beats Kansas on Saturday, the Longhorns will get a second chance to beat TCU in the Big 12 Championship Game.

Game vs. Virginia was canceled.

Green Wave quarterback Michael Pratt accounted for six TDs in the win. With a win against Cincinnati next week, Tulane clinches a berth in the American Athletic Conference title game.

Kimani Vidal ran for a career-high 242 yards to maintain their lead in the Sun Belt West Division as they look to clinch a spot in the conference title game with a win against Arkansas State on Saturday.

Though Minnesota running back Mohamed Ibrahim rushed for 263 yards on 39 rushes, the Hawkeyes muscled a win to put themselves in position to win the Big Ten West title with a win against Nebraska on Saturday.