Week 12 of the college football season features several exciting matchups, and we’ve got you covered from start to finish for all the big games underway Saturday.

No. 4 TCU needed every second to beat Baylor, kicking a field goal as time expired to win 29-28 to stay unbeaten. In the Big Ten, No. 3 Michigan rallied to beat Illinois in the final seconds.

Currently underway, No. 2 Ohio State is taking on Maryland and No. 9 Clemson is hosting Miami. Texas is battling Kansas, looking to remain in the hunt to win a Big 12 title.

The day ends with a few strong matchups. Oklahoma is seeking revenge against No. 22 Oklahoma State in the Bedlam Series after losing to its arch-rival last season. No. 7 USC travels to the Rose Bowl to take on crosstown rival No. 16 UCLA. Finally, No. 10 Utah attempts to beat No. 12 Oregon for the third time in the last two seasons in a rematch of last year’s Pac-12 Championship Game.

Here are the top plays from Saturday’s slate!

The Longhorns order some Bijan

Bijan Robinson plowed his way into the end zone for a 2-yard touchdown run to get Texas on the board. 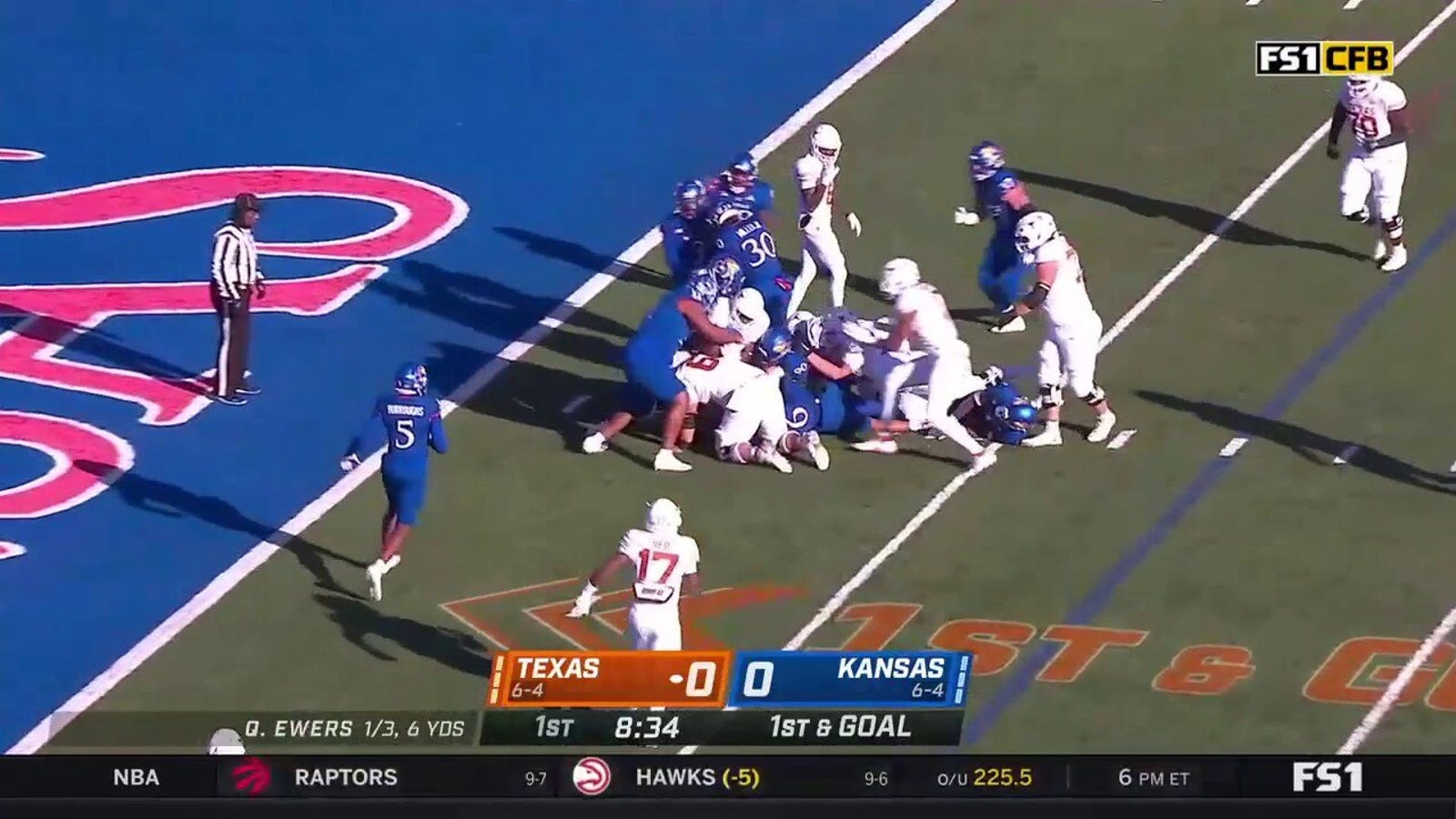 Texas Longhorns running back Bijan Robinson runs in a 2-yard score to take the lead over the Kansas Jayhawks.

And some extra Bijan

The star running back notched his second touchdown of the game, running untouched into the end zone to make it 14-0.

Now let the other Robinson score

Keilan Robinson took a screen pass 15 yards for an easy touchdown to extend the Texas lead to 24-0.

Bijan at the buzzer

The Texas RB completed the hat trick by running in for a 1-yard score as time expired in the first half.

Make that four for Bijan

Just get the ball to Robinson and get out of the way. He shifted by multiple tacklers to get a 32-yard touchdown run.

No. 2 Ohio State at Maryland

Ohio State’s star receiver made the tough catch along the sideline while getting interfered with for a 30-yard gain, which helped the Buckeyes take a 7-0 lead on the opening drive.

Terps on top at the half

Taulia Tagovailoa found CJ Dippre in the back of the end zone to give Maryland a 13-10 lead.

Sometimes the best offense comes from your … special teams?

After struggling to move the ball following its opening drive score in the first half, Ohio State got things rolling in the second half by blocking a punt in Maryland territory.

With multiple injuries at running back, Ohio State is still finding success on the ground. Dallan Hayden rushed for his second touchdown to extend Ohio State’s lead to 27-13.

Maryland’s QB tucked and ran with the ball into the end zone to not only make it a one-score game, but also made it a six-point contest after a successful 2-point conversion to make it 27-21.

DJ Uigalelei powered his way into the end zone to extend Clemson’s lead to 14-0 early on.

Clemson is having its way with Miami as Luke Price got wide open on the play-action pass at the goal line to make it 24-0.

Qualan Jones capped off the Bears’ opening drive by punching the ball into the end zone on a 10-yard scamper.

He can run, too

TCU QB Max Duggan has made a name for himself all season for the plays he’s made with his arm. However, it was his legs that got the Horned Frogs on the board to even up the game late in the first quarter on a 7-yard touchdown run.

Kelsey Johnson took the reverse and ran up field for a 2-yard touchdown to give Baylor the lead back.

Right after Baylor scored its second touchdown of the game, Duggan connected with Taye Barber for a near-80-yard reception on the opening plan of the ensuing drive that set up Kendre Miller to run for a touchdown a few plays later.

Not on TCU’s watch

Baylor tried to get a touchdown in right before halftime. But TCU defensive back Bud Clark picked off a pass in the end zone to keep the game tied going into halftime.

Baylor got an interception of its own after TCU’s star QB tried to go for the home run ball to break a 14-14 tie. Instead, the Bears ended up with the ball.

The Horned Frogs took the lead for the first time in the game when Duggan threw a 26-yard touchdown pass to Gunnar Henderson, who was wide-open coming out of the backfield.

Baylor back on top

After running one in earlier, Johnson made the tough grab at the goal line to give the Bears the lead at the beginning of the fourth quarter.

Reese gets a piece of the end zone

Baylor RB Richard Reese pounded one into the end zone on for a 1-yard touchdown to extend Baylor’s lead to 28-20.

Emari Demercado ran into the end zone with ease for the 3-yard score to cut Baylor’s lead to 28-26 with just over two minutes remaining.

But TCU wasn’t able to tie the game as the pass on the 2-point conversion was dropped.

Mad scramble to kick for the win!

TCU tested its kicker by calling a running play on third-and-long with just 22 seconds left. However, Griffin Kell remained cool, calm and collected to nail the field goal as time expired to give the Horned Frogs the win and keep them unbeaten.

The Michigan running back and Heisman hopeful juked multiple defenders on the game’s opening play for a 35-yard gain before scoring later in the drive to put the Wolverines up 7-0.

As Michigan looked to score its second touchdown of the game, Corum fumbled the ball to Illinois. More importantly, Corum grabbed at his left knee and remained on the turf for a few moments before walking off the field under his own power.

Michigan fans were able to breathe a sigh of relief after halftime as its star running back was cleared to return after undergoing tests on his left knee, per the ABC broadcast. Corum entered the game on Michigan’s second play from scrimmage in the second half and carried the ball for a 5-yard gain.

The carry was Corum’s only touch in the second half, leaving his status for next week’s meeting with Ohio State in question.

Illini even it up

Illinois finally got into the end zone midway through the third quarter when Chase Brown broke through the pile for an 8-yard score to make it a 10-10 game.

Brown burst open for a 37-yard touchdown run that put Illinois up 17-10 and gave Michigan its first fourth-quarter deficit of the season.

The Wolverines settled for two field goals in the fourth quarter to cut their deficit to one point with about three minutes remaining.

Jake Moody nailed the 35-yard field goal to complete the comeback for Michigan and keep it unbeaten ahead of The Game.

Best of the rest:

Vanderbilt pulled off a 31-24 upset over Florida on Saturday, making it just the second time in 32 games the Commodores have beaten the Gators.

In shades of his college coach, Travis Hunter is scoring touchdowns on both sides of the ball for Jackson State. The freshman had a pick-6 before making an impressive toe–dragging TD catch.