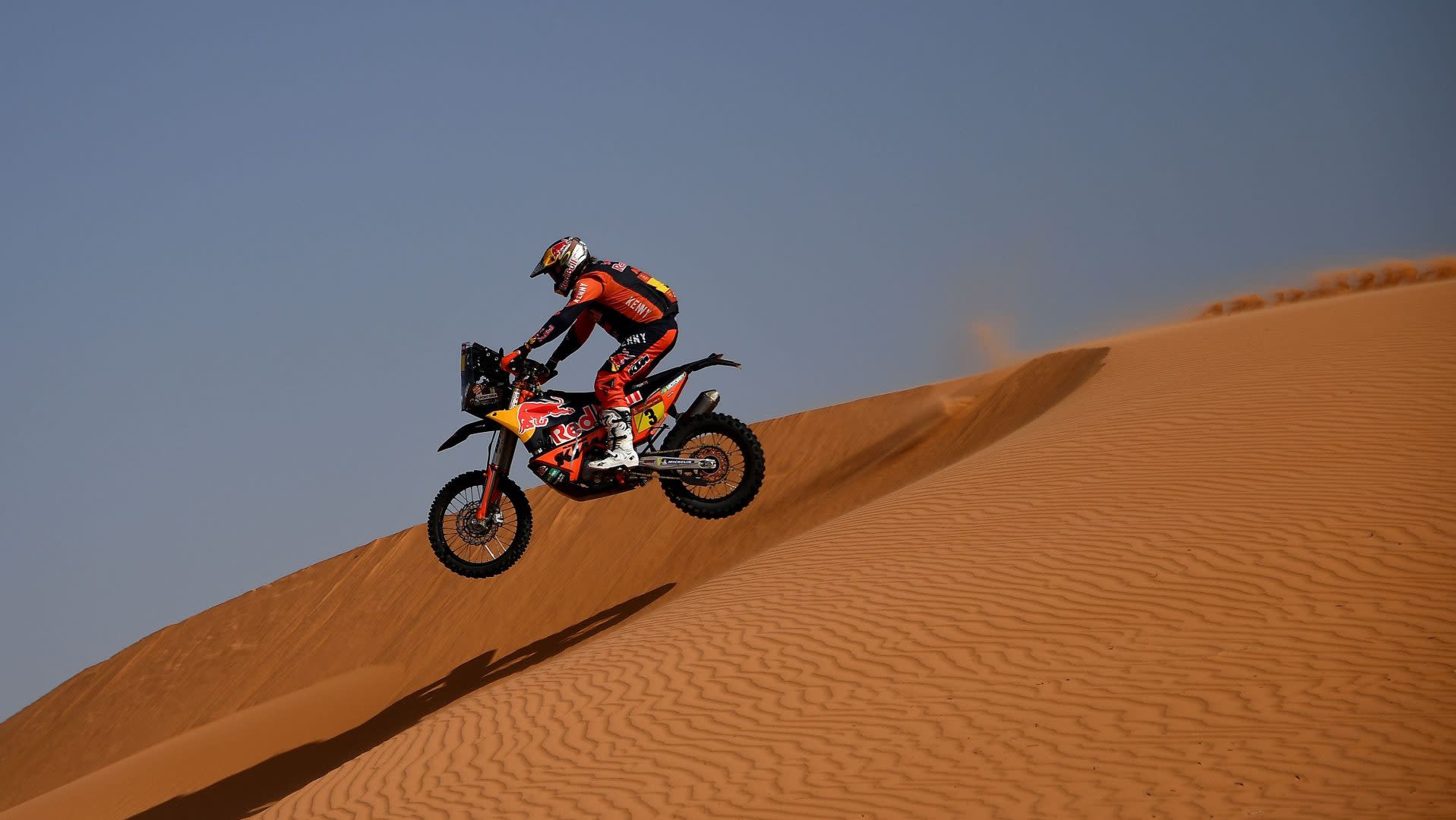 Two-time winner Toby Price retook the lead in bikes as the 2021 Dakar Rally reached its halfway point Friday after Stage 6 of 12.

Price, who opened with a Stage 1 victory but fell more than 17 minutes behind after a 28th in the second stage, finished seventh in the sixth stage, which he said had “crazy” pace.

The Australian became the first repeat overall leader after a stage in bikes. Riders Joan Barreda, Skyler Howes, Xavier de Soultrait and Kevin Benavides had led after each of the previous four stages.

HOW TO WATCH ON NBCSN: Information, schedules for the Dakar Rally

“It’s been a mixed bag of everything really, so it’s been up and down everywhere,” said Price, who won Dakar in 2016 and ’19. “But all in all, we’re still in the fight. We’re still there in the race, so anything can happen. There’s a long way to go, and we’re looking forward to Week 2 already.”

Barreda won Stage 6 over Ross Branch and Daniel Sanders. Defending bikes champion Ricky Brabec finished fourth and improved to 13th overall, just under 20 minutes behind Price. “Not where we wanted to be, but we do have 6 days left, so let’s hope to stay focused,” Brabec posted on Instagram.

Howes, an American privateer, was ninth overall and trailed by just over 15 minutes after a 19th in the stage Friday. “I actually had a pretty decent day,” Howes posted. “The pace is so high this rally, it’s crazy. Everyone is racing like it’s the last day, so it’s hard work to keep pushing every inch.”

Friday’s sixth stage was delayed 90 minutes to be shortened by 100 km (62.13 miles) by rally organizers after feedback from the Stage 5 route.

Saturday will be a rest day for the 2021 Dakar Rally, which will resume Sunday with Stage 7 and more than 3,600 kilometers still remaining over the last six stages.

Today they cut 100km off the stage which helped a bit, the pace was crazy. 7th in Stage & in the lead overall. We’re in the fight and anything can happen, there’s a long way to go! Rest day tomorrow so will try and regather for the rest of the Rally 🤜🤛#Dakar2021 pic.twitter.com/09KzW7lonx

In other divisions Friday:

Cars: Sainz scored his first stage victory since the opener, but the three-time Dakar winner remained more than 40 minutes in third overall behind Peterhansel, who finished fourth in Stage 6.

After running in the top 10 through the first five stages, champion rally legend Sebastien Loeb lost major time because of a broken rear suspension. He was forced to wait for a replacement without a spare on hand. “It happened on a portion with bumps,” Loeb said. “That’s the way it is when you push hard. But the race is over now.”

Side by sides/lightweight/light prototypes: Khalifa Al Attiyah won his first stage in side by sides this year. Rounding out the podium were Gerard Farres Guell and American Austin Jones, who trails Aron Domzala by 40 seconds in the overall.

American Seth Quintero won his fourth stage in the light prototype division and leads teammate Cristina Gutierrez Herrero by nearly 2 hours. Quintero also won the stage in lightweights, trailing by 8 minutes, 26 seconds in the overall for that class.

“Today went absolutely amazing,” Quintero, 18, said in a release. “We moved up one position in the general rankings and, instead of 28 minutes off the lead, we’re now only 8 minutes away. It feels amazing to be the youngest ever Dakar stage winner.”

Trucks: Leading a podium sweep for the Kamaz-Master team, Airat Mardeev scored his first victory of the 2021 Dakar Rally. Teammate Dmitry Sotnikov was second and held an overall lead of 37 minutes, 34 seconds.

Watch highlights from Stage 6 of the Dakar Rally on NBCSN at 6:30 p.m. ET today.