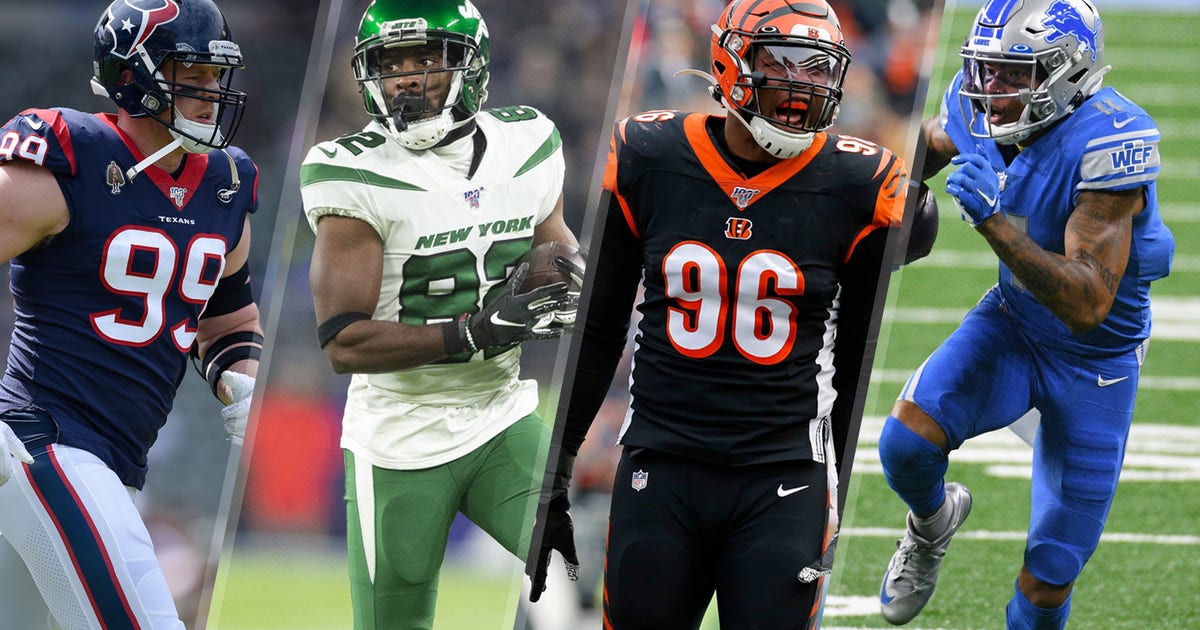 While the deadline generally does not have the same intrigue as it does in MLB or the NBA, it’s still an opportunity for teams to improve. There were some blockbuster trades last year. Cornerbacks Marcus Peters and Jalen Ramsey, as well as wide receiver Emmanuel Sanders, were all on the move last season.

The Green Bay Packers (5-1) are certainly a team looking to beef up its roster in 2020.

Green Bay doesn’t have many glaring holes on either side of the ball, but it could use depth with a new pass-rusher or receiver. With roughly $7.1 million of cap space (per Over The Cap), the Packers have some wiggle room when it comes to acquiring potential players.

Here are a few possibilities:

In seven contests, the former Oklahoma wideout has 10 catches for 138 yards and one touchdown. It’s clear he ranks behind Randall Cobb, Brandin Cooks and Will Fuller V on Houston’s depth chart. But Stills has proven himself as a deep threat in the NFL. With Allen Lazard still out with a core injury and Marquez Valdes-Scantling continuing to be unreliable, Stills could fit in as an outside target for quarterback Aaron Rodgers. Plus, his contract expires at the end of this season, so the Packers could get him for cheap.

While NFL trade-deadline deals are rare, inner-division transactions are even scarcer. But the Packers might want to target Jones, who hasn’t been utilized much by Detroit’s offense in 2020. Jones grabbed five catches for 80 yards against Atlanta last week, but before then, he hadn’t topped 55 yards or four catches in a single game. Like Stills, Jones’ contract is intriguing because he will be a free agent after the season. Green Bay still has one game left on schedule (Dec. 13) against the Lions, so again, Detroit might look for a different partner for this deadline dance.

Kerrigan has been a staple of the Washington Football Team since he was drafted 16th overall in 2011. Playing in his final season of the five-year, $57.5 million deal he signed in 2015, the 32-year-old is on the back nine of his NFL career but still has gas in the tank. Kerrigan has collected five total tackles, two sacks and a fumble recovery in two games played in 2020. He finished with 5.5 sacks in 12 contests last season and recorded 13 in 2018. Those numbers would look good in green and gold.

Somehow, Crowder continues to post solid box scores despite being on a horrendous Jets offense which ranks dead last in total yards (264.3) and points (12.1) per game. In four contests, Crowder has logged 29 catches for 383 yards and two scores while lining up primarily in the slot — a position of need for Green Bay. Signed through 2021, Crowder will be paid $11.5 million next year but would take up just $1 million in cap space if cut. The Packers might have to be careful, though, because Crowder has been dealing with a groin injury this season, causing him to miss three games.

Cincinnati’s veteran defensive end will probably be a target for many NFL contenders at the deadline. At age 31, Dunlap figures to be out of the Bengals’ long-term plans since the team is in the process of a full-scale rebuild. He only has one sack in the Bengals’ first six games of 2020 but had 61 total tackles and nine sacks last season. Dunlap is signed through 2021, so Cincinnati would likely ask for more than a draft pick or two. Dunlap would be a $13.5 million cap hit next season, although he’d take up $2.3 million of dead cap space if cut. According to his recent Twitter activity he seems to want out. Hey, real estate is cheap in Green Bay!

Another Bengals player who could make sense for Green Bay, Ross has not produced much in his NFL with just 51 catches for 733 yards and 10 touchdowns in 27 games over four seasons. But he can still stretch the field. The problem is, stretching the field is really the only football skill he has. His 4.22-second sprint was the fastest 40-yard dash time in NFL Combine history, so he has the speed to theoretically take the top off defenses but the production is not there. With all that said, it still could make sense for the Packers to trade for him for solely his ability to threaten defenses deep and in turn open up more intermediate space for Davante Adams and Robert Tonyan. Cincinnati has already declined his fifth-year option, and he will be owed about $2 million for the rest of the season, which means this deal could make sense for both sides. Green Bay gets a deep threat and the Bengals cut bait on a draft mistake and salvage a pick.

It could be the perfect time to bring the former Badgers star and Pewaukee, Wis., native back home. Thanks to now-fired general manager Bill O’Brien, the Texans don’t own a draft pick in the first two rounds in 2021. Desperately in need of a rebuild, Houston might be more willing to trade away known assets now more than ever. Watt is signed through next season, although his dead money value is $0 in 2021, meaning it wouldn’t cost Houston (or Green Bay, for that matter) a dime to cut him next year. At age 31, Watt has three sacks, five tackles for loss, 24 tackles and three passes defensed in seven contests. Adding one of the best defenders of the last decade could make the Packers favorites to claim the top NFC seed.