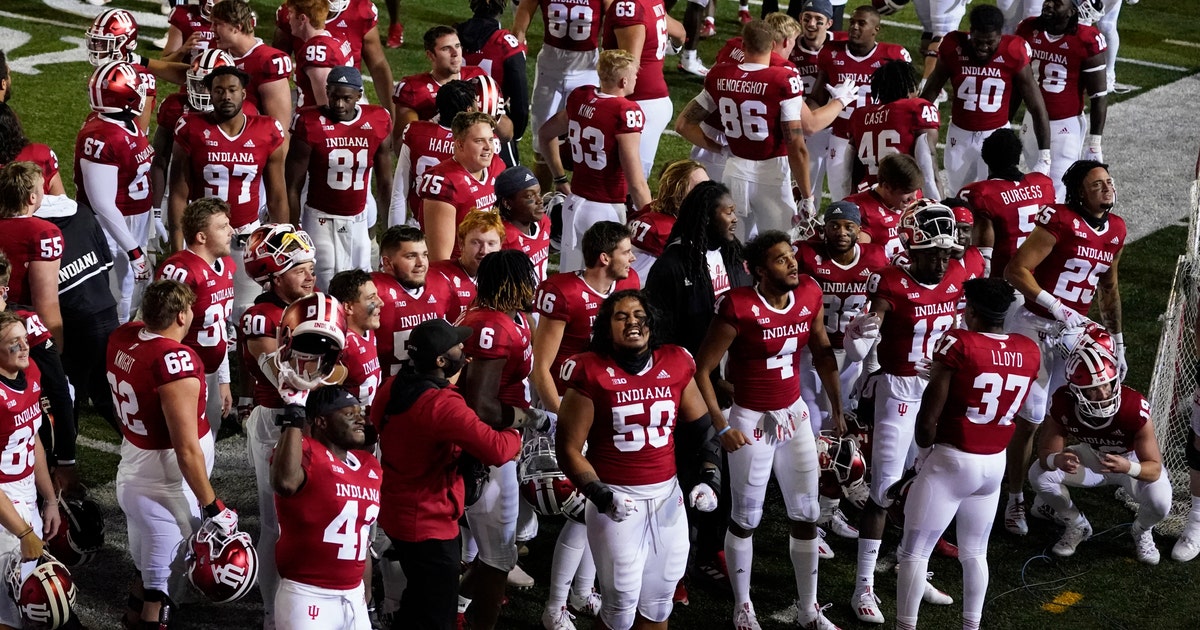 Indiana jumped into The Associated Press college football poll at No. 17 on Sunday after pulling off the weekend’s most dramatic upset and Ohio State moved up to No. 3 following a dominant season debut.

Clemson remained a rock-solid No. 1 and Alabama was No. 2. The Tigers received 52 first-place votes and the Crimson Tide got the remaining 10.

No. 4 Notre Dame and No. 5 Georgia each slipped a spot behind the Buckeyes.

Indiana pulled off a stunner in overtime to jump into the rankings, beating then-No. 8 Penn State to earn the program’s first victory against a team ranked in the AP top 10 since 1987. The Hoosiers snapped a 25-year absence from the poll last season but stayed there only one week.

Indiana has its best ranking since 1993, when it also reached No. 17. With Rutgers coming up next week, the Hoosiers might see a longer stay in the poll than last year. Then again, the Scarlet Knights won their opener, too.

Penn State slipped 10 spots to No. 18 after losing to the Hoosiers for just the second time in 24 meetings since joining the Big Ten.

What’s up with Ohio State moving past Notre Dame after the Fighting Irish had their most impressive victory of the season, against Pittsburgh?

Remember, the Buckeyes were No. 2 in the preseason and a close second to No. 1 Clemson.

That held back the Buckeyes and some other Big Ten teams for a few weeks. Now that all the voters are including Ohio State, Wisconsin, Michigan, et al., those teams got an extra boost this week.

Wisconsin moved up five spots to No. 9, appearing on every ballot for the first time since returning to the rankings three polls ago. No. 13 Michigan also moved up five spots, though the Wolverines got a bounce from an impressive victory at Minnesota.

The other teams to move into the rankings this week are regulars.

— No. 24 Oklahoma is back after three weeks out. That is the longest run of polls that have not included the Sooners since 2009, when they were left out of the final six Top 25s.

— No. 25 Boise State made its season debut, along with the rest of the Mountain West Conference, and grabbed the final spot in the rankings. The Broncos were last ranked in the final poll of the 2019 season. Boise State has now made at least one poll appearance in 19 straight seasons, tied with Southern California for the seventh-longest active streak.

— Minnesota dropped out after getting thumped at home by Michigan.

— The Atlantic Coast Conference, which had the most teams ranked last weekend, lost two Sunday. Virginia Tech and North Carolina State both fell out after losing for the second time this season.

The only conference without representation in the Top 25 is the Mid-American, which doesn’t begin play until Nov. 4.

No. 3 Ohio State at No. 18 Penn State. The Nittany Lions didn’t hold up their end of what was set to be a top-10 matchup, but it’s still probably the toughest game on the Buckeyes’ regular-season schedule.

Navy roars back to stun Georgetown at home, 78-71