Five and a half hours on a plane is a long time for anyone to sit and think, but for football players after a loss, it’s an eternity.

Not only are you dealing with the physical fallout from playing a hard-hitting game on Saturday within the confines of a pressurized cabin, but you’re also engrossed with the mental aspect of recapping every play over and over and over — in one’s mind and, often, on an iPad screen loaded with the video.

Oregon players and coaches got to do plenty of both on their way back to Eugene following their 49-3 season-opening loss in Atlanta to No. 1 Georgia. The mood from the forward cabin to the last row was somber, and the chatter was kept to a minimum (and not just because of the late hour).

How could it not be? Not after that result, in that way, even if it was to the reigning national champions in their own backyard.

RJ Young breaks down what happened in Oregon’s loss to Georgia in their season-opener in Atlanta.

Yet, as the miles passed and the team moved further west, the Ducks’ disappointment turned into a resolve that crossed beyond position groups or experience on campus. Far from wallowing in a loss, the hard work that poured in from that moment has since turned into eight wins in a row, the fifth-longest streak in the country.

Plane rides have not been as quiet nowadays for Oregon.

On the return flight from Boulder last week after the Ducks handled an overmatched Colorado side, the players were singing, joking, cheering and hogging up all the limited in-flight Wi-Fi bandwidth to show each other highlights — a jovial mood that was a far cry from their initial road trip. While some teams could have suffered from a hangover lingering after a result that couldn’t be changed, the program instead has used that setback against Georgia to refocus on the little things and draw closer together with impressive results.

“I think that’s why we’re playing well — we connect well with each other. We’ve got enough older guys and enough newer guys that are feeling their way through it,” quarterback Bo Nix said this week after practice. “Collectively as a whole, I think we’re having a blast and that shows on the field. I would say it correlates to winning. Having fun takes your mind off the seriousness of the game.”

That’s not to say they are playing free because there’s nothing at stake.

Leading into this Saturday’s game against bitter rival Washington (7 p.m. ET on FOX and the FOX Sports app), the Ducks have shot up into the top six of the College Football Playoff rankings and now even have a viable path to a potential rematch with the Dawgs in the Peach Bowl semifinal. Nix has continued to garner buzz surrounding a trip to New York for the Heisman Trophy ceremony, and the team has become the favorite to make it to Las Vegas and win the Pac-12 Championship. 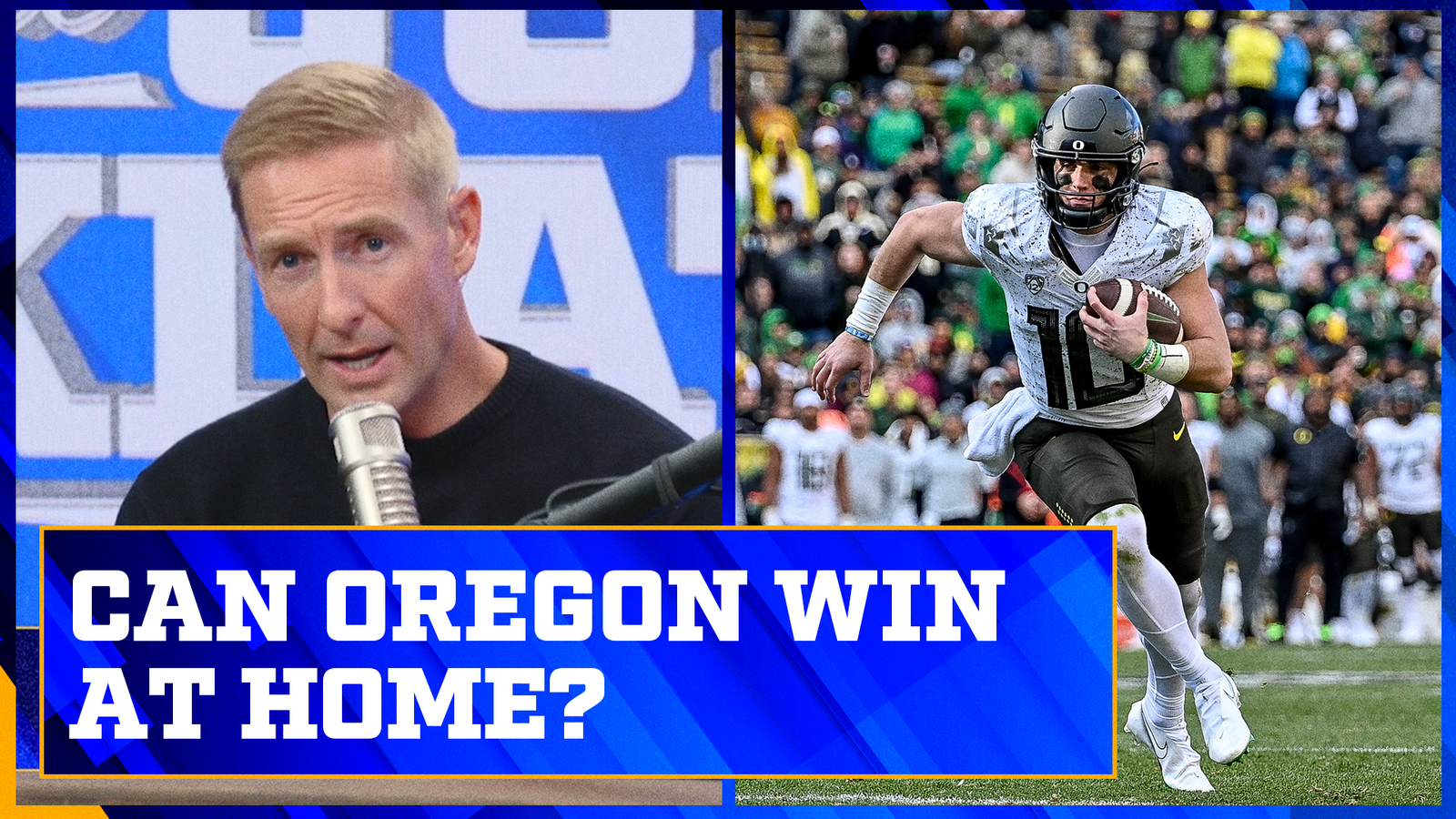 Joel Klatt breaks down Oregon vs. Washington and looks at how Bo Nix has been a dominant force for the Ducks.

Not quite what the obituaries were saying about Oregon’s season back in September.

“Obviously you’re not the same team you were the first time you touched the field. Ultimately, we went out there every single week and said how can we get better at small things. And those small things are starting to add up for us,” head coach Dan Lanning told FOX Sports. “I don’t think any of us felt like we were going to get here and have your best product in your very first game. There was an opportunity to coach better, an opportunity to play better, and everybody in our organization has attacked that really well.”

Having fun is one thing, making history is another.

Not that Lanning and others wouldn’t mind repeating a little from the not-too-distant past. The last three times Oregon lost its season opener, it wound up in a New Year’s Six game.

In a curious twist of fate, one of those came directly at the hands of Nix, who began his career by throwing a game-winning touchdown in his first start at Auburn, a pass that beat the Ducks in 2019. While he would go on to win SEC Freshman of the Year honors that season, the rest of his time on the Plains was far more of a rollercoaster ride that produced as many memorable moments as it did disappointing lows.

The departure of Gus Malzahn and a season-ending injury in 2021 combined to lead Nix to transfer, with plenty of regrets over never quite reaching the promised land expected after arriving as a five-star player and son of a school legend.

“I had a lot of respect for Bo going against him as a coach, and a lot of confidence in what kind of player he could be and what kind of person he was, more importantly,” added Lanning, who faced Nix three times in the Deep South’s Oldest Rivalry as UGA’s defensive coordinator. “Bo’s always displayed the talent and passion, and always been a smart player. You saw those pieces. I think it’s been a lot of fun to see it all come together here, and I’m really excited for him.” 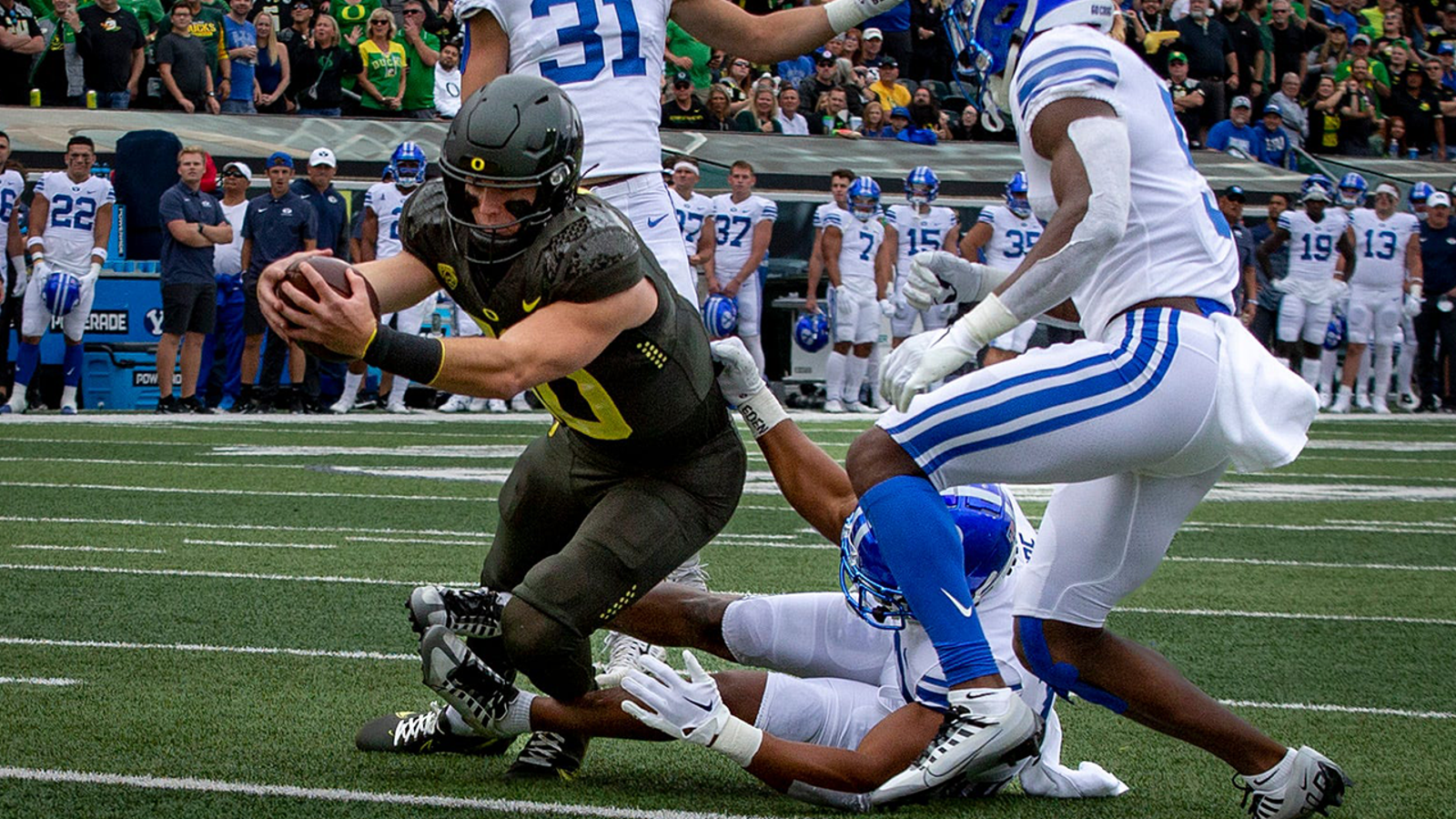 As capable as Nix was in the eyes of Lanning and the coaching staff, they didn’t make any assurances over the starting job behind center as the senior was deciding upon his next stop after entering the transfer portal. Not only did the new staff in Eugene want to see the quarterback’s talent emerge in a new environment, but they also wanted to see how a new group took to the relative outsider through spring ball and into summer.

Safe to say those questions were answered quite early, with teammates embracing the lifelong Southerner for the way he worked over the offseason, even electing him a captain for the opener.

“He loves the game of football. He’s up here all the time learning, he’s up there creating ideas and giving his two cents on the game plan,” said offensive coordinator Kenny Dillingham, who previously coached Nix in 2019 with the Tigers. “He cares. It sounds simple, but the care factor is real. I think he’s enjoying having fun again.

“I don’t know if it’s as much about (leaving) Auburn as it’s him getting a fresh start, remaking himself, and really being allowed to take ownership and have a say in the game plan. He likes doing what he feels comfortable with.”

That comfort factor has shown up most in one of the areas where the signal-caller once struggled: under pressure. Oftentimes at Auburn, pressure would result in forcing a throw or getting rid of it to an inopportune spot as Nix’s decision-making process was sped up.

Now, not only is Nix much calmer in the pocket, but he’s benefiting from not having to do too much on every drop back. It helps that Oregon has only allowed one sack all season, a testament to what’s being done up front as much as it is knowing the timing better on every play.

“I think our offense is one of the best in the country. When you look at what we’ve been doing offensively, everybody touches the ball almost. A countless amount of people have a touchdown. Our O-line is the best in the country,” Nix said. “You take me out of the equation, our offense as a whole is still so dynamic. Guys are doing so many different things, you can’t say it’s just me because you’ve got guys running touchdowns, catching touchdowns.

“I literally think my job is the easiest because I just have to get those guys the ball, and they do the work for me.”

Oregon is third in the country in scoring at 43.1 points per game, a dozen points on average better than last season. The Ducks rank second in yards per game and, underscoring the balanced nature of their attack, are one of just four Power 5 programs that have rushed and passed for more than 2,000 yards after nine games.

Lanning, despite his defensive upbringing, lights up when discussing wrinkles the Ducks bring to the table in the run game, and how effective they’ve been when it comes to downfield opportunities. Most of all, he’s thrilled at how they’ve combined such success moving the ball with taking care of it at the same time.

Nix has thrown just three interceptions since the opener, one of which came on a Hail Mary attempt at Cal, and it’s the only team in the country that hasn’t lost a fumble this season.

“I think Nix is playing with a ton of confidence. You can just see the way he’s operating the game has slowed down for him,” Huskies coach Kalen DeBoer said. “Man, I can’t say enough good things about what he’s doing leading that offense. They’re one of the best in the country for a reason.”

And all this, mind you, despite getting shut down — and very nearly shut out — in Week 1.

That’s just college football for you. There’s no preseason to get a new coaching staff in sync with its players or any actual game time for transfers to jell with the other veteran starters.

Every campaign is as much about evolution over the course of four months as it is about the early end results, something the Ducks have proved in 2022.

Back on that long flight home after losing to Georgia, amid all the negativity and dwelling on missed assignments, the team also had a chance to stew a bit over a back-handed compliment they received postgame that may have proved prophetic from a certain Bulldogs coach.

“They’ll bounce back from this, and (Lanning) knows we have better players,” Georgia coach Kirby Smart said. “He’ll never say that, but he knows we’ve got better players.”

Smart is correct noting that his former protégé wouldn’t say such things publicly or privately about his team.

But he was on the nose in noting that they’d bounce back. Perhaps if they keep it up and keep rolling right along like they have, Oregon could well change everybody’s minds on that line about better players, too, if for no other reason than because the players themselves have gotten better.

“As games get played, it starts to reveal itself more and more, and guys build confidence and start to figure it out,” Lanning said. “A lot of times, all those guys need is an opportunity to prove that.”

Based on the far more enjoyable rides home, the Ducks are proving something.