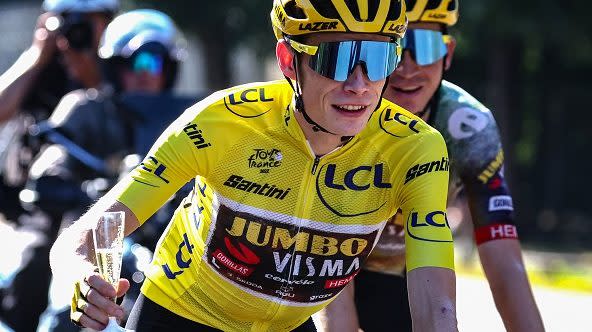 Vingegaard celebrated his first Tour title on Sunday, riding into Paris to claim a trophy he wrapped up days earlier with dominance through the mountains and help from cycling’s dominant team (which also won its much more long-awaited first Tour title).

He began Sunday’s 21st and final, non-combative stage with a lead of 3 minutes, 34 seconds over Slovenian Tadej Pogacar, whose two-year reign as champion ends. Brit Geraint Thomas, the 2018 Tour winner, takes third. It is the first time since 1989 that all three men standing on the podium know what it’s like to win a Tour.

Belgian sprinter Jasper Philipsen won the last stage. Vingegaard, Pogacar and Thomas finished with the peloton in the same time.

In the first Tour to start in Denmark, a 25-year-old from North Jutland became the second Dane to finish it on the top step on the Champs-Élysées backdropped by the Arc de Triomphe. (The other, Bjarne Riis in 1996, after retiring a decade later, admitted to doping throughout the 1990s and during that Tour.)

Vingegaard is familiar with that picturesque setting in Paris. Last year, he stood on the runner-up step of that podium, a distant five minutes, 20 seconds behind Pogacar, who then at 22 years old looked like he had no peers. Certainly not Vingegaard, who was not supposed to be on the podium.

Many will start his narrative a handful of years ago. They will share the footage of Vingegaard working in a fish-packing facility to fund his cycling. That story, too rich to ignore, came before he signed with the Jumbo-Visma pro team in 2019.

But if you ask the man himself, he will say that he began believing a day like this was possible during his Tour debut last year. Jumbo-Visma star Primoz Roglic, who squandered the 2020 Tour title in the final time trial, crashed badly in the third stage and withdrew before the ninth in 2021.

Vingegaard, whose only Grand Tour experience was a 46th-place finish in the previous year’s Vuelta a España, ascended to team leader. He was in fifth place at the time.

“We can’t hide you behind Primoz anymore,” he was told.

Three days later, Vingegaard had the day of his young career, dropping Pogacar on Mont Ventoux, the bald “Beast of Provence” that is one of the Tour’s iconic climbs. Pogacar caught back up with help, and his grip on the Tour at the time wasn’t threatened, but it was a sign of what Vingegaard was capable of.

This year, the Dane returned for his second Tour as a co-leader with Roglic. Again, Roglic crashed early and abandoned before stage 15. This time, Vingegaard had already gapped Pogacar in the Alps and was about to pad his lead in the Pyrenees.

Jumbo-Visma, which took over from Ineos Grenadiers as the world’s top team two years ago, was down not only Roglic but also Dutchman Steven Kruijswijk, who was third in the 2019 Tour.

The depth of the outfit shone. Vingegaard was paced on climbs by Wout van Aert, the top sprinter this year, and American Sepp Kuss. In post-stage interviews, he first dedicated his riding to his girlfriend and daughter — “my two girls” — then thanked the team.

The Dutch team formerly sponsored by Rabobank earned its first Tour top-five in 1998 with Dutchman Michael Boogerd. It then cycled through Grand Tour general classification contenders, from Russian Denis Menchov (who won the Giro d’Italia and the Vuelta and had a Tour runner-up stripped due to biological passport violations) to Dane Michael Rasmussen (and his infamous removal while leading the 2007 Tour) to Dutchmen like Robert Gesink and Kruijswijk.

Then came Roglic, the former junior champion ski jumper who was the face of the team as it overtook Ineos. Vingegaard was in the background until last year. Now, he stands alone in the Paris gloaming, no longer a hidden man.

OlympicTalk is on Apple News. Favorite us!

Stephen Jones’ praise of Dak Prescott significant or preseason hype? | SPEAK FOR YOURSELF