Week 10 was a fun one in the NFC North. All four teams scored at least 30 points, two of them against fellow division opponents, and man, that Vikings game…

Green Bay did their best to match the Minnesota vs. Buffalo thriller, too. The Packers upset the Cowboys at Lambeau Field as quarterback Aaron Rodgers remains the Cowboys’ boogeyman. Coming into the game, Rodgers was 7-2 all-time against Dallas, including 2-0 in the postseason, and as we’ve seen repeatedly, you can never count him out. He rode a three-touchdown performance by rookie wide receiver Christian Watson to yet another heartbreaker for Dallas fans.

Let’s take a look back around the division on Sunday, shall we?

It may seem counterintuitive to praise the defense in a game where the opponent scored 30 points, but the Minnesota Vikings have the clutch gene this season and that’s just as true on the defensive side of the ball as it is on the offensive side (more on that later).

Yes, Buffalo had a double-digit lead three separate times throughout the game and the Bills were able to jump out to as much as a 17-point advantage in the third quarter, but the defense came through when the offense needed it, especially in the second half, which made closing the gap possible. 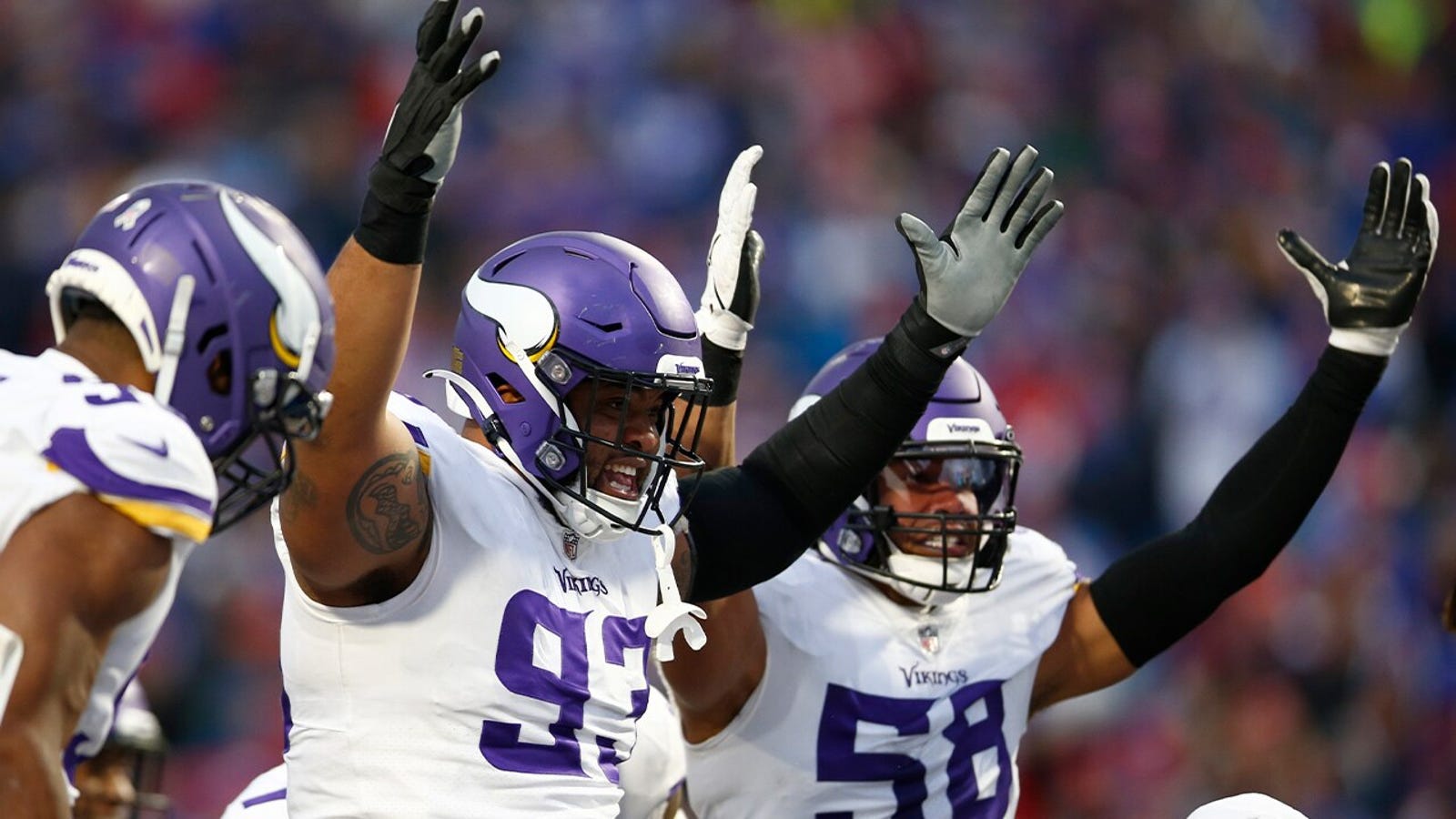 The Minnesota Vikings forced Josh Allen to fumble at the goal line and use the timely TD to eventually pick up a 33-30 OT victory.

Their pass rush woke up as Za’Darius Smith and Danielle Hunter combined for the Vikings’ first sack of the day on Josh Allen. It came on third down on Buffalo’s drive following Dane Jackson’s interception of Kirk Cousins. It prevented the Bills from taking what would have been a three-score, and maybe insurmountable, lead.

Then there was the contribution of one Patrick Peterso,n who paved the way for back-to-back scores by the Minnesota offense thanks to his end-zone interception of Allen at the start of the third quarter. He returned the ball 39 yards to Minnesota’s own 34 and Cousins took it the rest of the way to bring the Vikings within four points, after the uncharacteristic extra-point miss by Greg Joseph.

And just when it seemed like Minnesota had run out of juice (and time), turning it over on downs with just 41 seconds left at the 1-yard line, the unthinkable happened: Allen fumbled the snap. Linebacker Eric Kendricks fell on the ball for a defensive score that put Minnesota ahead by three points.

In the most unimaginable last minute of the game, Buffalo got another possession out of it and forced overtime, which is admittedly a defensive blemish on the day. The Vikings made up for it, or should I say, Peterson made up for it, after the offense stalled in overtime — only mustering a field goal. The Bills were staring down the goal line again before Allen’s fourth end-zone interception in the last two games as Peterson picked him off again and sealed the game.

This team continues to overcome adversity because of the complementary football they’re playing. When the offense falters, the defense picks them up, and vice versa. It was an instant classic and a microcosm of the Vikings’ season overall: they may get down but they are never out — and they find a way to win.

Justin Jefferson making his case for Offensive Player of the Year

I can’t talk about the game without mentioning the player who could finish the season as the league’s Offensive Player of the Year. Jefferson is top two — and in my mind, he’s not two. Talk about having a clutch gene, he’s made entirely of clutch. By the time the game was over, Jefferson had set yet another career high in yards with 193 on 10 catches with a touchdown.

More than the sheer volume of yards, it was how he got them that was impressive. Most importantly, see below, what might just be the best catch in NFL history. No hyperbole.

Not only did he make the one-handed, fingertip grab, but it was also between the hands of the defender as a contested catch on fourth-and-18 as the Vikings’ last prayer (or so they thought). Given that context, there’s no doubt this catch has unseated “The Catch” by Odell Beckham Jr., and I don’t think it’s particularly close.

Even if Jefferson’s receiving acrobatics weren’t enough to impress you, or convince you we are looking at the league’s best offensive player, maybe his blocking, of all things, might tip the scales. That’s right. Blocking. Our own Geoff Schwartz pointed it out but on the 81-yard Dalvin Cook touchdown run, it was Jefferson who got Cook a one-on-one matchup with the Buffalo defender that he took full advantage of as he blew past him in a footrace to the end zone. It was the score that turned the tides completely for the Vikings and laid the foundation for their incredible comeback.

Jefferson, like his team, is the real deal and isn’t showing signs of slowing down as Minnesota continues its tear through the season.

There’s something in the water up in the North, because these teams were all productive, each scoring at least 30 points in Week 10 but also responding to adversity. The Lions, who were in line for the No. 1 overall pick earlier this season, have strung together back-to-back wins — over division opponents, at that.

It hasn’t been easy, either. The Bears looked like they were about to run away with the game on Sunay, coming out of the half and getting a two-score lead on Detroit. Wide receiver Amon-Ra St. Brown had yet another fantastic game, this time facing his brother and with his parents in the stands. He finished the game catching 10 of 11 targets for 119 yards. He had six catches by the early second quarter. Between him and some aggressive play calling by head coach Dan Campbell, the Lions were able to capitalize on a missed extra point and score to go up by one point.

Then, the defense held that lead, coming through by sacking Justin Fields to end the game in a fourth-and-8 situation. Despite the fact Fields broke multiple tackles, the Lions’ defense swarmed him and Julian Okwara was finally able to bring him down to essentially end the game.

The biggest thorn in Chicago’s side in their loss to the Lions was, well, themselves.

The Bears had four penalties resulting in gifting 41 yards to Detroit by the second quarter. The final quarter was a litany of mistakes that gave the Lions extra chances, too.

Linebacker Jack Sanborn, who had a career day with 12 combined tackles, two sacks and two tackles for loss, had an interception negated on the second-straight penalty on cornerback Jaylon Johnson. Safety Jaquan Brisker had gotten called for a late hit on the drive, too. It brought the Lions within a score and then a pick–six doomed them, though Jeff Okudah‘s interception return for a touchdown only tied the game. Fields atoned for his mistake with a 67-yard touchdown run, but then the defense ran out of gas, letting Detroit span the field and go up by one.

It’s okay. The Bears are still meshing and learning. These self-inflicted wounds are going to happen in this process, but the encouraging part is they are fixable. And that’s just what Chicago will end up doing.

Rodgers thinks Packers can build on win over Cowboys

Things appeared doomed for the Packers on more than one occasion Sunday evening against the Cowboys. But coming out of the half, it looked like Dallas was going to run away with the game. Running back Tony Pollard scored on a 13-yard run following a muffed punt return by the Packers’ embattled special teamer Amari Rodgers. The Cowboys’ defense then forced a three-and-out behind a third-down sack of Aaron Rodgers and on their next possession, scored again. It left Green Bay down 28-14 in a game that they once seemingly had control of. But then they gave Dallas the same treatment, scoring on back-to-back drives and coming alive once again.

So, was that a turning point?

“I think so,” said Rodgers following the game. “I do. And that’s what I told them in the locker room, that was a turning point for us. Hopefully, a turning point that leads us to go on a streak. That was a chance for guys to (go), ‘Yeah, it’s not our season, 3-7, what do we do in the offseason, it’s not going to be our year.'” 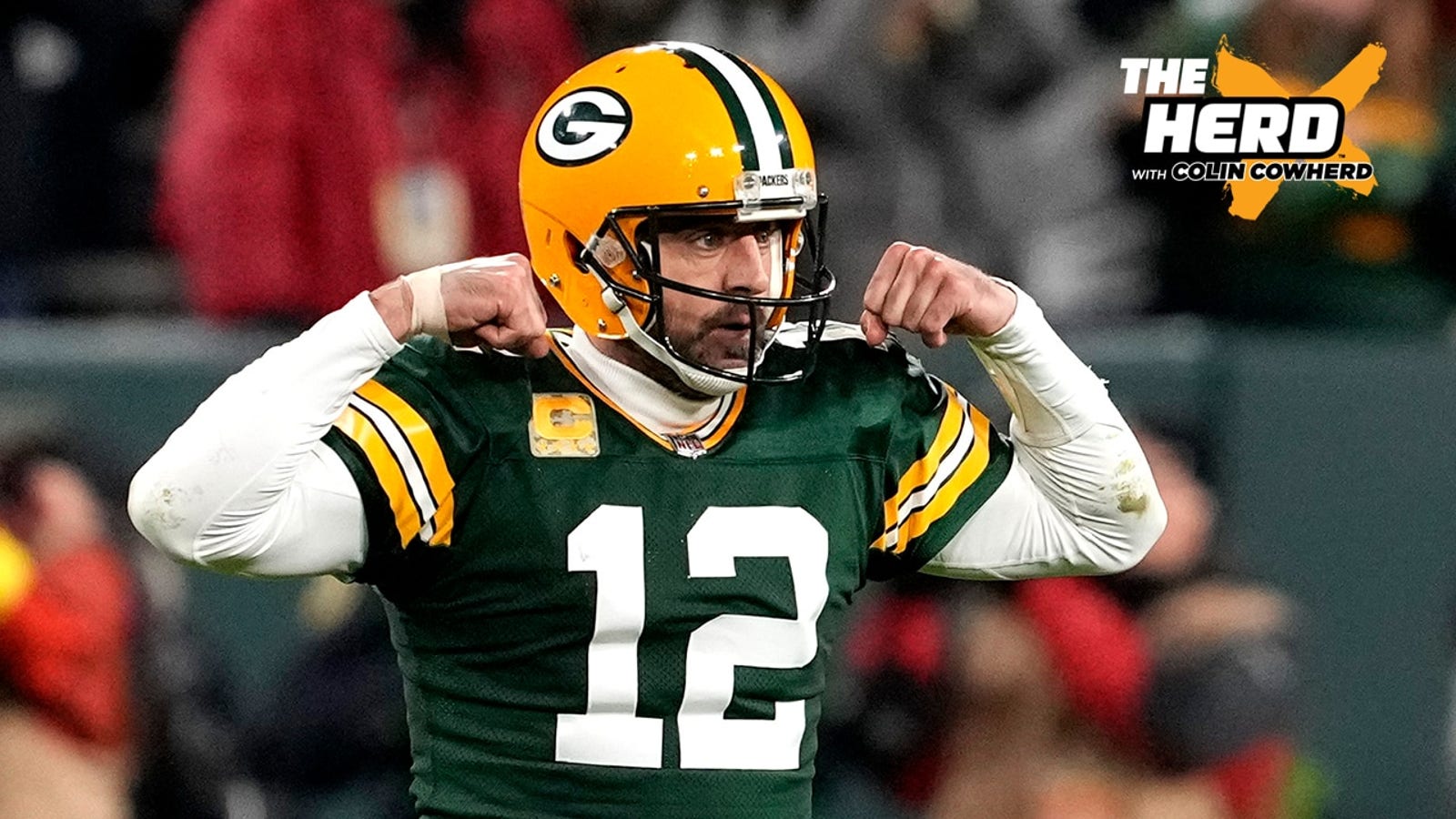 James Jones joins Colin Cowherd on The Herd to discuss the Green Bay Packers 31-28 overtime victory over the Dallas Cowboys.

But they battled back and are hoping that proves a metaphor for the rest of the season.

“Last week was definitely a low, rock-bottomish for sure,” Rodgers said. “Not in a depressive, isolationism way, but more disappointment, and I felt like that was the bottom, and it was only up from there. I think a lot of the battles that we face are between I and I, between the person that can go out there and dominate, and knows that they can, and the little voice in your head that tries to knock you off that confident perch that you’re on. I’m happy that I knocked that voice back into hell and had a good performance today.”