Week 10 of the NFL featured the top candidate thus far for game of the year, as Kirk Cousins and the Minnesota Vikings executed an improbable comeback to top Josh Allen the Buffalo Bills in overtime.

‘This is the best team I’ve been around!’ – Justin Jefferson 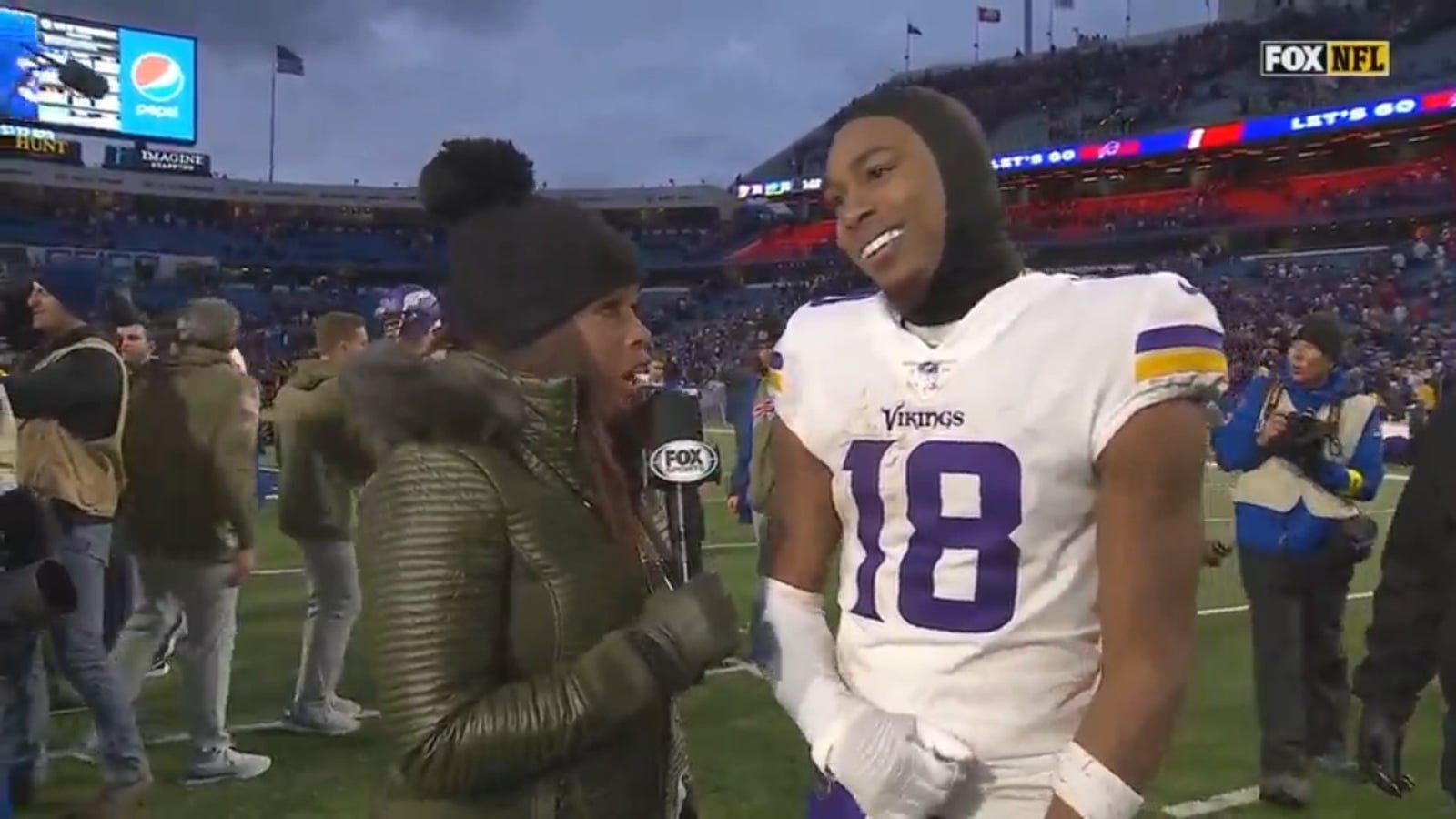 Justin Jefferson stops by to talk with Pam Oliver about the collectiveness the Minnesota Vikings had against the Buffalo Bills on Sunday.

Kicking things off Sunday, the Tampa Bay Buccaneers continued their resurgence abroad by stifling the Seattle Seahawks at Germany’s Allianz Arena in the fourth game of the 2022 International Series.

Here are the top plays from Sunday’s action!

Justin Herbert hit DeAndre Carter for a 32-yard touchdown to put the Chargers on the board early.

The Cowboys were first on the board in this one, but Aaron Rodgers responded with a monster 58-yard touchdown from Christian Watson to knot things up.

The Packers took the lead on a dazzling 12-yard Aaron Jones touchdown at the end of the second half.

All gas, no brakes

The Cowboys answered with three touchdowns, including a smooth 35-yard score courtesy of CeeDee Lamb.

The Packers knotted things up in the final frame, thanks to the efforts from the rookie Watson, who added his third touchdown of the game late in the fourth quarter to send things into overtime.

The Cowboys came up short on their first overtime possession on a questionable pass interference penalty, and the Packers sealed the deal with a field goal to secure the win at home.

The Cardinals added two second-quarter touchdowns to jump out to a 17-3 lead in the first half, including a must-see sideline snag from A.J. Green.

The Rams were never able to find a rhythm, and things were made worse when Cooper Kupp suffered an apparent knee injury in the second half and exited the game. The Rams went on to lose by double digits.

Jeff Saturday earned his first lead as an NFL coach late in the first quarter, as Matt Ryan drove his way into the end zone on a QB sneak to close an 11-play, 70 yard drive for Indianapolis.

After battling back and forth in the first half, the Colts went ahead in the third quarter, thanks to a 66-yard run from Jonathan Taylor.

The Raiders quickly responded with a picture-perfect 48-yard touchdown reception by Davante Adams to make it a one-point game, 20-19, in the fourth quarter.

The Colts prevailed after Ryan led yet another go-ahead TD drive and the defense clamped down in the red zone in the final seconds, giving Saturday a win in his pro coaching debut.

All board the Jet! Justin Jefferson took off on Minnesota’s opening possession, collecting a 46-yard catch-and-run before hauling in a tough grab on a fly route for the Vikings’ first touchdown. Then, it was griddy time.

Ice in the veins

Ahead of the half, Allen brought his group downfield in a hurry, scrambling for a 25-yard gain before finding Gabe Davis in the end zone to give the Bills a 24-10 lead.

Dalvin Cook seized the upper hand over his little brother James Cook by popping free for a surprise 81-yard touchdown. It brought the Vikings within 10 and was a treat to see for his family members in attendance.

This catch was pure perfection from Stefon Diggs. Unfortunately for Buffalo, it couldn’t make good on his efforts, as Allen was picked off in the end zone by Patrick Peterson.

Nonetheless, the grab was a sight to behold.

Jefferson got rare air on a crucial fourth-and-18 play, elevating to pull in an absolutely stunning one-handed snag to keep the Vikings’ final drive alive.

The Vikings pushed their way all the way to the 1-yard line, but on fourth down, Cousins was stopped just short of the goal line on a QB sneak. The crucial stop from Buffalo’s front seven gave it possession at the 1-yard line with just under 50 seconds left.

Just when it seemed impossible for Minnesota, Allen fumbled Buffalo’s first snap of the drive on a sneak attempt, which Eric Kendricks promptly jumped on for a tide-turning touchdown. The wild turnaround silenced Buffalo’s home crowd, and put the Vikings up 30-27 with 41 seconds to play.

The Bills marched down the field, aided by another great catch from Davis, to kick a field goal to force overtime.

When it mattered most, Minnesota’s defense came up with another massive takeaway. Peterson, the former First-Team All-Pro, intercepted Allen in the end zone for the second time, sealing the victory for the Vikings.

The Browns found pay dirt in just four plays, capping their opening drive with a dart from Jacoby Brissett to Harrison Bryant.

The Giants QB was money on New York’s first possession, going four-of-four for 62 yards, and an early touchdown to Lawrence Cager.

After making his nearest defender miss, Darius Slayton used his blockers and took off on a 54-yard house call, putting N.Y. up 14-3.

Would you believe Kadarius Toney hadn’t scored before Sunday’s game? The Chiefs‘ newest wideout was visibly elated to record the first of his career, helping K.C. take a 7-0 lead.

Right on the money

Patrick Mahomes continued his supremacy into the second quarter, leading the Chiefs downfield for another score. This time, he dialed up a dime to Marquez Valdes-Scantling to push K.C. ahead 14-0.

It was only a matter of time before Travis Kelce got his name into touchdown column, right? Mahomes hooked up with his favorite red zone target for his fourth score of the game.

Lay it all out

This eye-popping diving grab from Christian Kirk didn’t affect the final outcome, but it’s worth laying your eyes on.

George Pickens flashed his power on a short handoff in the red zone, putting Pittsburgh up 7-0 in the first.

The color is red

Andy Dalton was spectacular in the first half. The “Red Rifle” went 12-for-16 with 129 yards and a touchdown through two quarters, tossing a pretty pass to Juwan Johnson for the tying score with seconds left in the half.

Despite parting ways with T.J. Hockenson, Detroit wasn’t devoid of playmakers at tight end. Brock Wright freed himself up in the red zone to haul in the Lions’ first score, putting them up 10-3 in the second quarter.

We don’t know how Justin Fields made something from nothing on this touchdown romp for Chicago, but his clever act of escapism brought Chicago even with Detroit at 10 a piece just before halftime.

Fields can run, and Fields can throw. He showed off his big arm on a deep shot to Cole Kmet, and finished off the long pitch-and-catch to put the Bears ahead 24-10.

After D’Andre Swift brought his squad within seven on a brisk nine-yard house call, the Lions’ defense helped even the tally after a huge pick-six from Jeff Okudah.

There are many times when Fields is the best athlete on the field. He showed why teams fear his rushing ability by breaking loose for a 61-yard touchdown on the ground. And we could’ve sworn we saw sparks under his feet as he flew past the pylon.

It’s day of firsts in the NFL, and another young player hopped into the end zone for his first career score Sunday. His name: Jalen Virgil, and you can bet he won’t forget this marvelous 61-yard house call soon.

This stellar footwork from Nick Westbrook-Ikhine helped Tennessee come within three, 10-7 just before the half.

The Titans drew up a little trickery to take the lead in the third, as Ryan Tannehill found Westbrook-Ikhine once again on a superb 63-yard hook-up.

The Bucs struck first when Tom Brady hit Julio Jones on a 31-yard touchdown pass. It was an easy catch-and-run for Jones to give Tampa Bay a 7-0 lead.

The Bucs were looking energized in Munich, when Leonard Fournette barreled in for a 1-yard score to increase the lead to 14-0. His score capped an impressive 86-yard drive. That remained the score at halftime.

Seahawks picked off … who?

The Bucs tried a razzle-dazzle trick play, but Tariq Woolen intercepted Fournette’s pass to Brady. Yes, you read that right.

Brady continued to carve up the Seattle defense, throwing a 3-yard touchdown pass to Chris Godwin to put Tampa Bay up 21-3 early in the fourth quarter.

Geno Smith responded after his fumble, throwing a 21-yard touchdown pass to Tyler Lockett as the Seahawks cut the Bucs’ lead to 21-9.

Late in the fourth, the Seahawks forced Brady into his first interception in 399 attempts, capitalizing on the takeaway with a 19-yard touchdown pass from Smith to Marquise Goodwin, on a fourth-down snap no less.