It was a Hollywood script gone north.

The star quarterback suffers a setback, but still finds a way to get his team into position for the game-winner over an archrival. No. 6 Oregon and its Heisman Trophy candidate Bo Nix were all set to see just such a moment unfurl at Autzen Stadium.

The problem for the Ducks?

It was No. 25 Washington and Michael Penix Jr. who put the pen to paper and acted it all out on Saturday night, all but ending their rivals’ hopes of making it to the College Football Playoff with a wild 37-34 upset in the process down in Eugene.

Highlights: No. 25 Washington stuns No. 6 Oregon 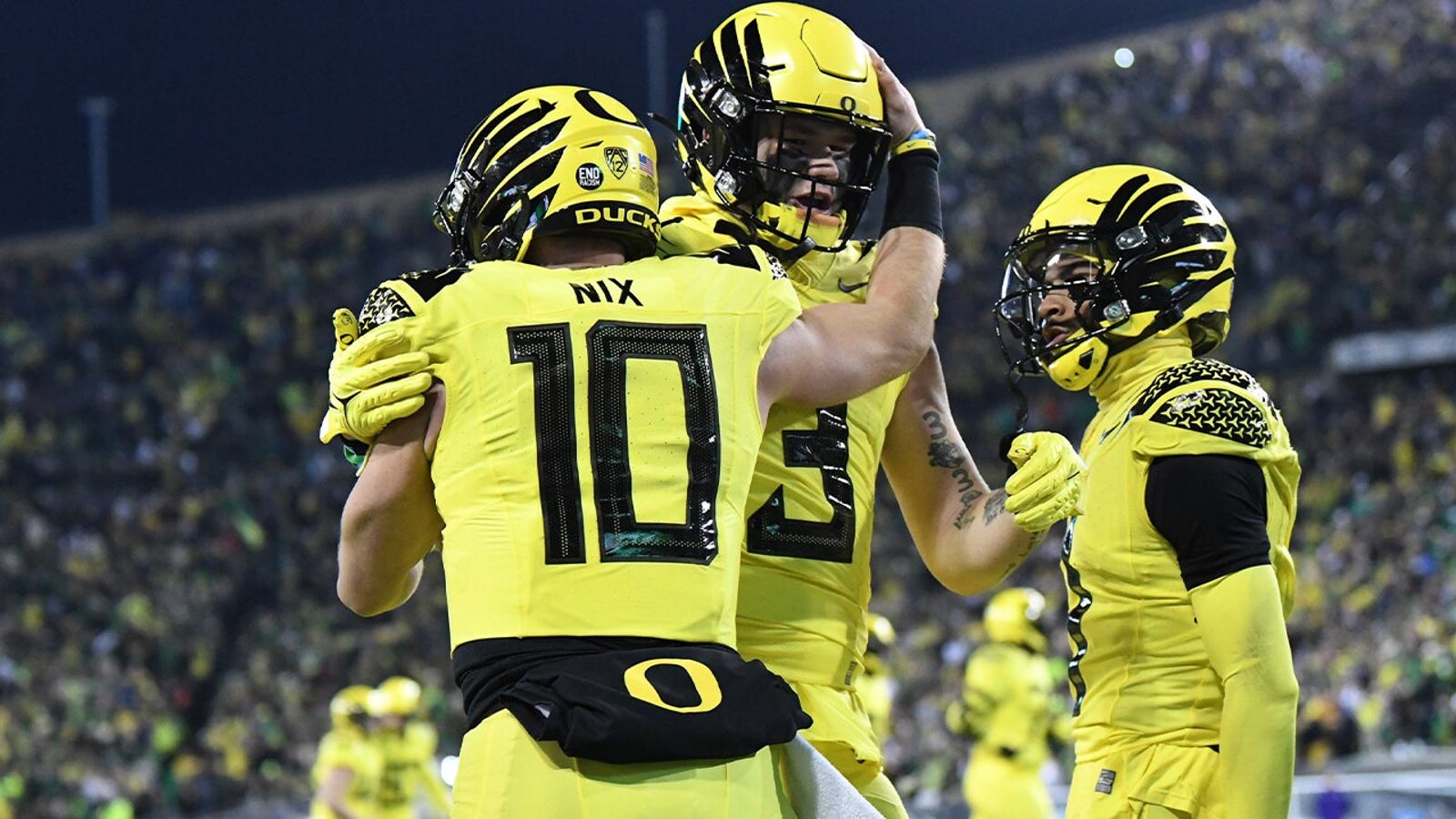 Nix, who threw for 280 yards and accounted for three total touchdowns, was excellent most of the game, but failed to pick up a critical third down draw with 4:04 left in the final quarter and things hanging in the balance. To make matters worse, he took a helmet directly to his right leg and needed assistance to gingerly make it off the turf.

That was just the opening that Penix Jr. and the Huskies needed, and they took full advantage of it. Just three plays into the next drive, the Indiana transfer uncorked a beautiful bullet along the sidelines directly into the hands of sophomore Taj Davis, who took it 62 yards to the house on what would be his only catch of the contest (and a memorable one at that) which tied things up at 34 apiece.

The Ducks still had a shot, however, but Nix was still in the injury tent dealing with his leg injury. Backup Ty Thompson, a former top recruit, trotted onto the field, thrust into a big moment with national implications on the line. The redshirt freshman’s lone passing attempt missed the mark during the drive and eventually brought up a fourth-and-short at their own 34-yard line.

First-year coach Dan Lanning, who has been aggressive all season, opted to go for it after picking up three previous short-yardage attempts on fourth down. That was with Nix in the game, however, using the senior’s bruising size and power to muscle over the line for all of them.

Instead, it was all on tailback Noah Whittington (108 yards, one TD on 20 attempts), who was given the ball on a run up the middle out of the shotgun but saw his legs slip out from under him to turn things over on downs.

“Certainly not the result we hoped for,” said Lanning afterward. “This game 100 percent falls on me. Our players gave phenomenal effort.”

Oregon linebacker Noah Sewell eventually brought an end to the ensuing Washington drive in favorable field position, but Peyton Henry’s 43-yard field goal sailed through the uprights for what eventually was the game-winner.

“We’re just a team that always comes back and keeps fighting,” Washington head coach Kalen DeBoer said after the game.  “It showed itself for four quarters.”

Penix, who threw a costly interception at the goal line earlier in the fourth quarter, wound up with 408 yards and two touchdowns through the air — the most any Huskies QB had ever thrown for against their rivals in green and yellow.

“It’s not like him to throw that interception,” added a smiling DeBoer, knowing Penix eventually got the team into the end zone three plays into their next drive after the pick.

Nix still had one more shot at glory before the clock expired, however, surprisingly trotting out from the medical tent onto the field to the delight of the faithful crowd in attendance. He had one timeout in his pocket and 51 seconds on the clock, but he couldn’t quite muster up some of the previous magic he had conjured over the course of the past eight games.

The upset ended Oregon’s 23-game win streak at Autzen, which was the third-longest in the country and originally began with a win over a ranked Washington side in 2019. The Ducks had dominated the rivalry of late, with 15 victories in the past 17 games, but couldn’t get the job done in the first meeting with two new coaches on either side.

The loss also all but assures that Oregon’s College Football Playoff hopes are out the window, too, given the rest of the competition for the final four spots nationally.

The Ducks can still win the Pac-12 and make it to the Rose Bowl come January, but will need to beat No. 13 Utah at home next week, Oregon State in Corvallis, and then the winner of the USC–UCLA matchup that will take place next week — fittingly in Pasadena.

The Huskies, meanwhile, have to be kicking themselves for taking an inexplicable loss in the desert to Arizona State earlier in the season or else they would be firmly in the mix to make it to Las Vegas for the conference championship. As it stands, the season is still quite a success for DeBoer, with the potential of reaching double-digits in the win column for the first time since 2018 and, at a minimum, restoring a bit of balance to one of their most meaningful Pacific Northwest rivalries.

Perhaps it wasn’t quite how many thought things would play out in 2022 or even leading into the weekend but that just might be why they don’t allow the scriptwriters to control the endings of college football games anywhere beyond the silver screen.

No. 25 Washington upsets No. 6 Oregon in a nail-biter

RJ Young reacts to Washington’s upset victory and explains why the Huskies should not be overlooked.

Three other takeaways from the game:

While some first-time head coaches might become a little more conservative as the pressure ramps up playing a bitter rival, that was not the case with Lanning. The Ducks’ head man remained aggressive as ever on Saturday night, belying the fact that his team was playing a ranked opponent or were riding an eight-game win streak that helped them also harbor tangible College Football Playoff aspirations.

In much the same fashion as he did in a big win over UCLA at Autzen last month, Lanning opted for a surprise onside kick in the first half. The attempt, which was narrowly unsuccessful, later led to points the other way, but you have to admire that the circumstances were not altering the decision-making process.

Some of Lanning’s thinking had to be the lack of defensive stops either side was able to make early in the game, while also noting that the Huskies weren’t exactly making a special teams allowance for the possibility and keeping an extra return man up front with an eye on the kicker.

The antagonistic thinking wasn’t limited to the start of drives either. As time dwindled in the second quarter and Oregon was driving around midfield, Lanning called timeout on fourth-and-2 with 31 seconds left. Given that Washington had plenty of time to work and the nation’s best passing offense, it was certainly a gamble to go for it and not punt given the field position advantage going the other way.

Still, there was little hesitation as the offense stayed on the field and Nix scrambled up the middle on a keeper to just barely pick up the first down. Not many would have had the goods to go for it in such a spot but Lanning sure did. The Ducks wound up getting a field goal attempt out of the affair and, though it missed, at least a little momentum going into what must have been a fired up locker room.

Still, the impetus to go for it such spots came back to bite UO in the fourth quarter as Whittinghton’s slip in his own territory all but gifted a field goal attempt for the Huskies in a tie game and what proved to be the winning points.

The best catch of the night? It may not have even been a catch.

Right after Oregon’s attempted onside kick before halftime, Washington coach Kalen DeBoer did what many coaches would do in such a situation hovering around midfield: take a shot at a big play. Off play action, Penix threw a bullet down the hashmarks that was aimed at Jalen McMillan. The receiver eventually came down with it, but not before Christian Gonzalez nearly snatched it over the top for a wild interception and one of the more remarkable plays of the game.

The Huskies quickly ran up to the line to run a play and prevent replay from taking a longer look, but it’s not often you see a wideout literally wrestle a defensive back to ensure a catch. The big gain of 34 yards later led to a UW field goal that proved to be the eventual three-point margin that the team took into the locker room at halftime.

When it comes to conversation topics in Pac-12 territory, chances are high that things almost always end up coming down to repetitive exchanges about conference realignment and media rights in the wake of USC and UCLA’s future departure for the Big Ten. Those are certainly important topics in the context of the health of the league and the future of the remaining 10 members.

But Saturday night’s result at Autzen seemed especially meaningful for folks out West, as it showcased the league’s two flagship programs (come 2024) battling it out under the lights in a big primetime game that more than delivered with plenty of drama and big plays. Even better than the hard-fought, back-and-forth nature of the game was who came out on top.

The Ducks and Huskies have represented the Pac-12 in the College Football Playoff before, and both look to be in position to remain atop the standings for many seasons to come given the resources at hand. They each have two big brands, rich histories, and the ambition to keep making waves nationally as much as they want to push forward locally.

Yet their rivalry has been quite one-sided lately, tilted heavily in favor of Oregon despite the program changing coaches every few years. In order for this to become the true flagship rivalry out West without the Trojans or Bruins to play foil, the Huskies will need to make things interesting by more frequently.

Based on what we saw in DeBoer’s initial foray into the series — and his past history of winning pretty much everywhere he’s been — it’s encouraging for those in the Pac-12 office, those boating around Montlake and among the neutrals throughout the footprint that there just might be a little balance between the two teams moving forward.