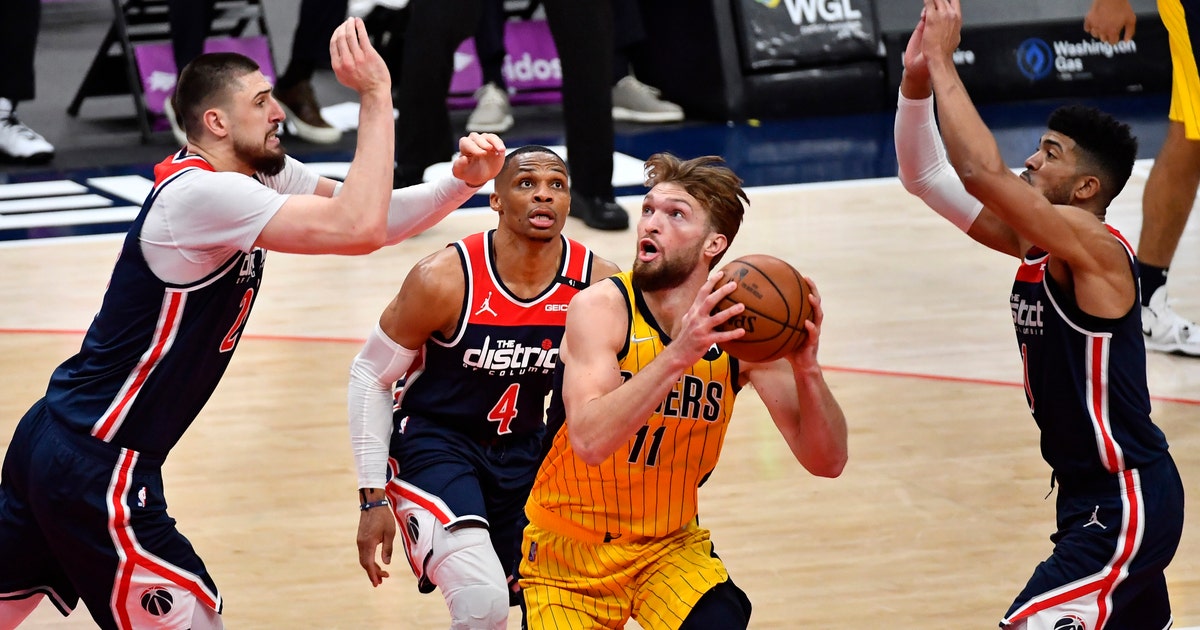 WASHINGTON — Russell Westbrook had 35 points, a season-high 21 assists and 14 rebounds for his NBA-leading 16th triple-double, helping the Washington Wizards to a 132-124 win over the Indiana Pacers on Monday night.

Westbrook also claimed the franchise career triple-double record in just his 38th game with the Wizards, this one coming while teammate and NBA leading scorer Bradley Beal sat out with a bruised hip. Darrell Walker had 15 triple-doubles in 283 games for Washington between 1987-1991.

Rui Hachimura scored 26 points and Chandler Hutchison had 18 in his debut with the Wizards, who won their second straight after losing eight of nine.

Domantas Sabonis had 35 points and 11 rebounds for the Pacers, who lost for the second time in six games.

Indiana entered in ninth place in the Eastern Conference, two games ahead of Chicago for the 10th and final play-in spot. The Pacers are now four games ahead of the Wizards, who began the day in 13th.

Malcolm Brogdon added 26 points for Indiana, which was outrebounded 55-37.

Neither team led by more than six points until late in the final quarter.

Down six in the fourth, Westbrook and the Wizards outscored the Pacers 22-8 over the last 5:47, a stretch that began with a 13-0 run.

Westbrook’s feed inside to Hachimura gave Washington the lead for good with 4:37 to play. He followed that with two spot-up 3s over Myles Turner, the latter from the right wing giving Washington its largest advantage to that point, 128-120, with 44.8 seconds to play.

Nate Bjorkgren after the #Pacers‘ loss to the Wizards: “Usually our bounce and activity is there for longer stretches, and today it wasn’t. It wasn’t there for the long stretches that we needed it.”#AlwaysGame pic.twitter.com/ZxbzqE1keX

Pacers: Finished with a 5-5 record in 10 March road games. … F Doug McDermott (right ankle) was ruled out pregame. … F Justin Holiday picked up a flagrant foul with 8:39 to play in the third quarter on Jerome Robinson‘s 3-point attempt.

Wizards: Coach Scott Brooks said it’s possible Beal could return for Tuesday’s game. “We’ll give him another day of rest and then know more tomorrow,” Brooks said of Beal. … Robinson made his fourth start, in Beal’s place.

HAZARDS OF A TRADE

Washington C Daniel Gafford, who was acquired with Hutchison from Chicago in a trade last Thursday, departed Monday’s game early in the fourth quarter after he appeared to injure his right leg.

He required assistance from medical personnel to leave the court after scoring 11 points and grabbing six rebounds in 15 minutes.