Home Sport Robertson scores 7th of the season in Stars 4-1 loss to the... 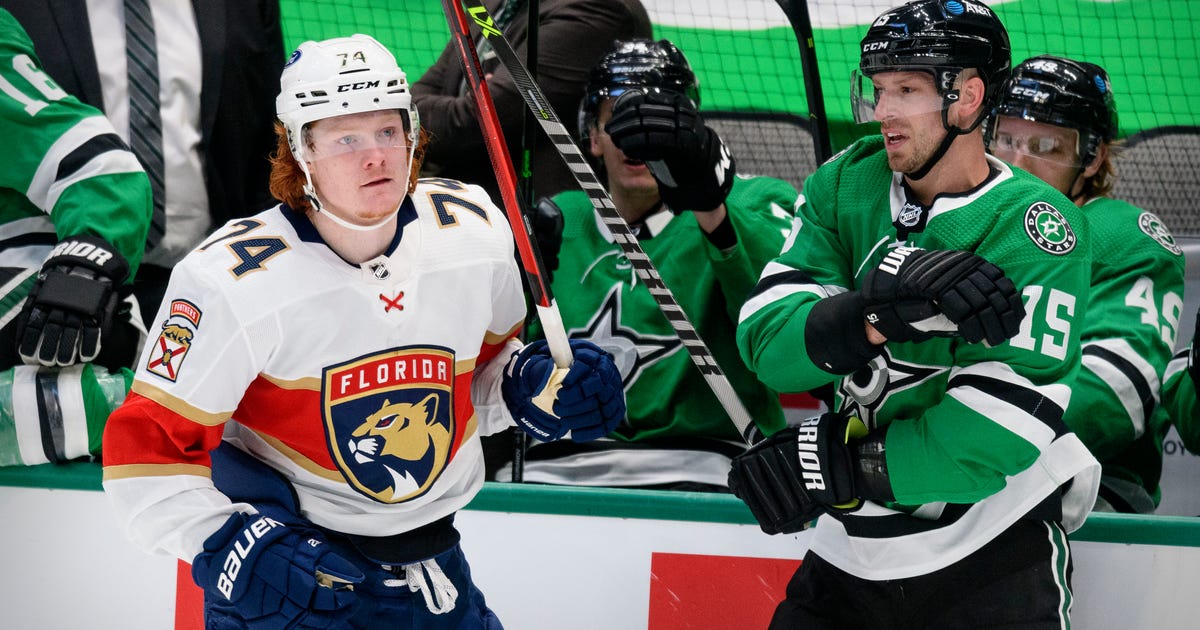 Ekblad was taken off on a stretcher midway through the second period after getting tangled up in the corner with Stars defenseman Esa Lindell following a hit from Lindell. An air cast was placed on his left leg. Panthers coach Joel Quenneville said Ekblad is expected to miss “extensive time” with more known Monday after further evaluation after the team returns to Florida.

Ekblad’s 11 goals this season are tied for the most among NHL defensemen. The two-time All-Star scored the winning goal with 9.3 seconds to play in Florida’s 4-3 overtime win over the Stars on Saturday night after his apparent score with 47.8 seconds was disallowed when a replay review showed he was offside.

“He’s had so many games when he’s dominant defensively, but it’s his offensive contribution, joining the attack, added a different dimension to our power play,” Quenneville said. “You couldn’t ask for anything more.”

Huberdeau became emotional on the ice while Ekblad was attended to and said teammates visited him briefly in a side room during the second intermission.

“Just went to give him a hug, tell him hang in there,” Huberdeau said. “In the third period, we had to come out, play well and get the win for him.”

The Panthers are two points behind first-place Tampa Bay and one behind second-place Carolina in the Central Division.

Anthony Duclair scored on a penalty shot in the first period and Owen Tippett added an empty netter with 1:05 to play with Huberdeau adding an assist.

Rookie Jason Robertson scored for the Stars, who went 1-2-2 during a five-game homestand and are in danger of failing to qualify for the playoffs after reaching the Stanley Cup Final last season.

In a matchup of backup goaltenders, Florida’s Chris Driedger made 33 saves and improved to 9-4-2. Dallas rookie Jake Oettinger stopped 19 shots and lost at home in regulation for the first time (3-1-5).

Only 31 seconds after Robertson’s redirect on a power play gave the Stars the lead 4:32 into the game, Huberdeau answered with a wrist shot after taking the puck from Jamie Benn along the right boards.

Duclair gave Florida its first lead at 6:26 on a sweeping forehand on the penalty shot after he got ahead of the field and was hooked by Andrew Cogliano.

Huberdeau added a power-play goal with 6:23 left in the first, shooting through traffic for the 3-1 lead for his third multi-goal game of the season.

The Panthers have won four of the first five meetings between the teams this season.

Florida captain Aleksander Barkov missed his third straight game with a lower body injury. The Panthers also played without another top forward, Patric Hornqvist, who missed both games in Dallas with an undisclosed injury that’s expected to sideline him for about a week.

“I think there’s a group here that has the ability to find ways to win hockey games, and we need to find out what it’s like to win in the playoffs,” Quenneville said.

Driedger has put together two successful seasons as Bobrovsky’s understudy (2.18 goals against average with Florida going into Sunday) after spending two years out of the NHL.

The Stars outshot the Panthers 27-9 over the final periods. The biggest save of those 27 came seven minutes into the third period when he stopped Roope Hintz, second on Dallas with 10 goals, on a breakaway.

With the Stars dropping to 7-6-7 at home, they can only hope a change of scenery over the next two weeks will help.

“I talked two weeks ago about the challenges we have,” Dallas coach Rick Bowness said. “Do we believe we can do it, do we want to do it? So, got to stay one step ahead of it. We’re going into Nashville; we have to beat them.”