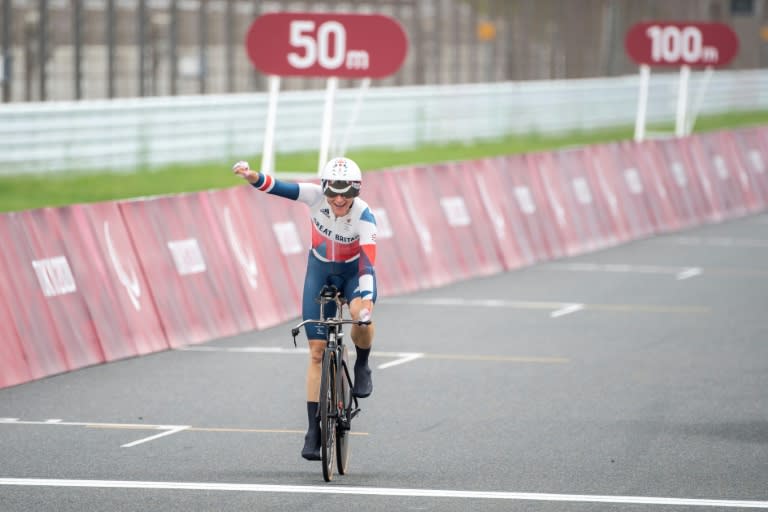 Cycling queen Sarah Storey said she had to conquer a “race of truth” Tuesday as she claimed a British record-equalling 16th Paralympics gold medal.

The 43-year-old, who won 3,000m pursuit gold on the track six days ago, blew away a high-class field in the women’s road C5 time trial at Fuji International Speedway to secure her 27th medal overall.

“It’s the race of truth,” said Storey, who was born without a functioning left hand.

“It’s you against the clock, and trying to pick off your competitors as you see them.

“I love watching time trials, I love putting it all together so when you get to race them and they go so well, they feel amazing.”

It was a repeat of last week’s pursuit one-two for Britain at the velodrome as Crystal Lane-Wright again took the silver.

But she was more than a minute-and-a-half behind Storey’s winning time of 36 min 08.90 sec for her three laps of the eight-kilometre circuit. Germany’s Kerstin Brachtendorf was third.

“I got caught up in a bit of traffic in certain parts of the course so I just had to navigate my way around that but apart from that it was super quick.”

Storey can win a 17th gold and become the greatest ever British Paralympian on Thursday if she retains her C4-5 road race title for a Tokyo golden hat-trick.

Storey’s longevity is remarkable. She began her Paralympic career in the swimming pool as a 14-year-old at Barcelona in 1992.

Twenty-nine years later, she looks unassailable having broken her own world record in the pursuit and taken her third successive C5 time trial gold.

“I’ve been preparing for this race for such a long time. The time trial is probably one of my favourite events,” Storey said.

“You bring this enormity to the line with you each time, but that also means that your competitors know how prepared you are and how much work you’ve put in to perfect it.”

After winning five swimming gold medals from 1992 to 2004, Storey switched to cycling at Beijing 2008, and now is on the brink of surpassing Kenny’s record, which has stood for 33 years.

She became Britain’s most successful female Paralympian at London 2012 when she overtook Tanni Grey-Thompson’s 11-gold record.

But she would not be taking for granted winning a third successive road race on Thursday, after taking gold in London 2012 and Rio five years ago.

“Road races are so unpredictable, they really, really are,” she said.

“So Thursday morning I’ll come out and try to have some fun and see which way the cookie crumbles.

“There are so many good girls who have also prepared for the road race so I’m really looking forward to seeing what comes out of that.

“It’s an exciting opportunity. It’s nerve-racking, absolutely — I have as many butterflies as anyone — but it’s also so exciting to take that opportunity and put it all down there on a race day.”

JaVale McGee on playing with LeBron over Steph, and says LeBron is a “player-coach” I Club Shay Shay