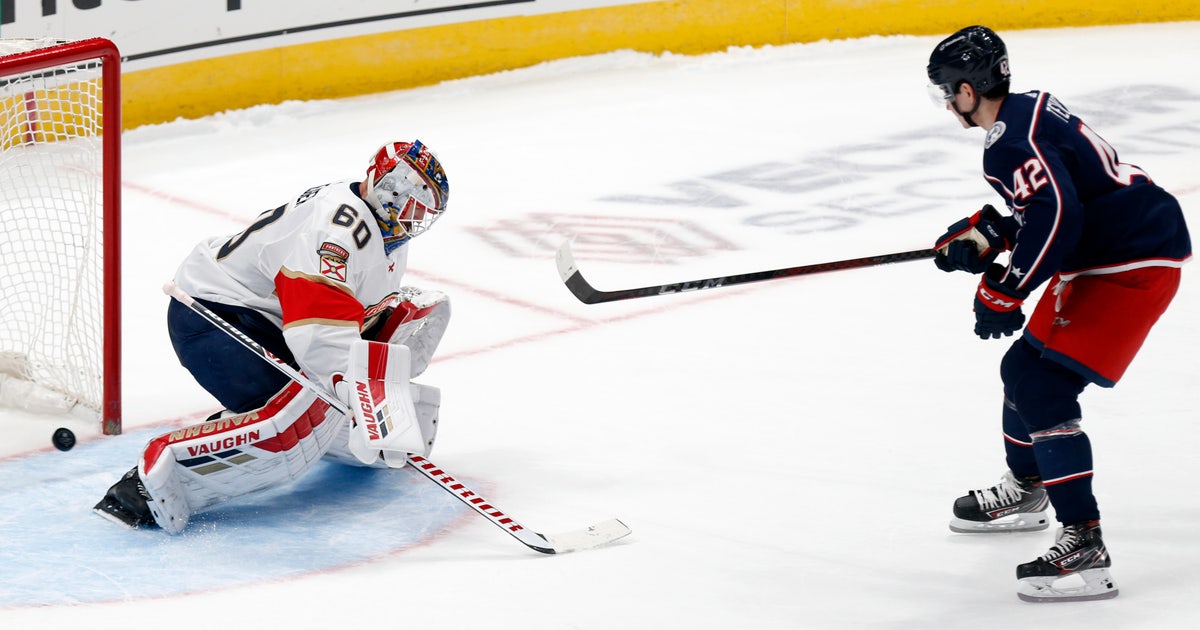 COLUMBUS, Ohio (AP) — Alexandre Texier slickly beat Chris Driedger five-hole in the fourth round of a shootout to lift the Columbus Blue Jackets over the Florida Panthers 3-2 on Thursday night.

Texier skated slowly in on Chris Driedger and poked the puck between his pads with the back of his stick. Columbus’ Elvis Merzlikins sealed it by denying Patric Hornqvist, who scored the winning goal in a shootout between the teams Tuesday night.

Tex scores, Elvis saves, and the @BlueJacketsNHL win in a shootout!!!#CBJ pic.twitter.com/ddPP79tdK8

“I mean, it’s like gambling,” said Merzlikins, who improved to 2-1-1. “Either you’re lucky or you’re not, so tonight luck was on my side, so I’m happy about that. I like (shootouts) when I win. When I lose, I hate them.”

Besides getting the shootout winner, Texier has started strong with four goals and two assists in the first eight games.

“Probably our most consistent guy,” coach John Tortorella said. “He turns one over and it costs us a goal (in the second period). I’m glad he got an opportunity to redeem himself. It was a great goal (in the shootout).”

Florida’s Eetu Luostarinen tied it in the third period, and Carter Verhaeghe also had a goal for the Panthers. Driedger finished with 29 saves.

Mikko Koivu and Max Domi scored and Merzlikins had 33 saves as Columbus dealt the Panthers their first loss in four games this season. Columbus rebounded after giving up a tying goal with 3 seconds left in regulation Tuesday night and then losing the shootout in the fifth round.

Koivu got his first goal as a Blue Jacket late in the first period. Eric Robinson got to the loose puck behind the net, brought it around and set up Koivu with a pass across the crease.

Mikko Koivu’s first goal as a member of the @BlueJacketsNHL!

Verhaeghe took the puck away from Texier in Florida’s zone late in the second and ended up poking it in from the doorstep past the glove of a falling Merzlikins.

Domi got his first goal of the season — also his first as a Blue Jacket — when he beat Driedger on a power play at 6:19 of the third period. The Panthers tied it again at 12:56 when Luostarinen tapped in a rebound that had trickled into the blue paint.

The Blue Jackets showed more jump after managing just 22 shots in the first game against Florida.

“That was a gritty effort there,” Dreidger said. “They came out harder than they did (Tuesday). They definitely upped their game.”

Tortorella said that it’s been difficult to work on problem areas because with the way the games are bunched together in the 54-game schedule, he can’t afford to sap the players’ energy with strenuous practices. The coaching staff has to rely mostly on showing video clips in meetings to make adjustments. Consistency has been an issue for the Blue Jackets early, along with a struggling power play.

John Tortorella is seeking stability on the heels of strong effort tonight and ahead of a two-game set in Chicago beginning tomorrow.#CBJ pic.twitter.com/I7uFS79KNT

“We’re trying to stabilize ourselves and not go up and down — one good game and a lousy game,” Tortorella said.

“I don’t think we’re walking out of here licking our wounds by any means,” Florida defenseman Aaron Ekblad said. “But we obviously have to know that we can beat a team like this and know (we) can take the lead in games. But there’s a lot to work on, no doubt.”

Blue Jackets: Jack Roslovic, who grew up in Columbus rooting for the Blue Jackets, made his debut with the team after coming in the trade with Winnipeg for Pierre-Luc Dubois. … Koivu, who is playing his first season in Columbus after 15 in Minnesota, has points in the last two games.

It was a memorable @BlueJacketsNHL debut for @JRoslovic96, who can’t wait to have another game like this in front of a rocking #5thLine crowd.#CBJ pic.twitter.com/ExWGvsXhZ8

Panthers: Move on to Detroit for a two-game set on Saturday and Sunday before heading home for a string of six.

Blue Jackets: Play at Chicago on Friday and Sunday.