With 2:04 left, holding a 27-17 lead and needing a first down to officially put the game away, the Titans dialed up a deep shot — an aggressive decision. It worked, though. Ryan Tannehill hit Burks, who picked up 51 yards.

It wasn’t so much about the soul-crushing explosive play, but what the first-round rookie showed on it. Here was the Titans’ top pick, lined up against one of the best cornerbacks in football in Alexander, imposing his will. He stacked Alexander and picked up about 18 yards — with the 2020 Pro Bowler trying to drag him down — before he could get tackled at the 5-yard line.

Popping up from the ground, Burks gave Alexander the “too small” gesture.

In his second game back from injured reserve, the former Arkansas star had his coming out party: seven receptions on eight targets for 111 yards. Burks showed that he could be the receiver Tennessee (7-3) needs to replace A.J. Brown’s production.

He has the upside to transform the Titans offense, which has built up momentum in the passing game over the past couple of weeks. A unit that was one-dimensional (a Derrick Henry-first run attack) and had a talent-deficient wide receiver room is much more threatening for the playoffs with Burks.

Another emerging weapon for Tennessee in the pass game? Fellow rookie Chig Okonkwo. The fourth-round tight end has had a reception of 30+ yards in each of the last three games. He’s been a walking explosive play for the Titans in recent weeks.

Okonkwo flashed his receiving skills in training camp and the preseason, and it seems to be coming together for him now in the games that count.

The Titans’ task? Finding a way to get him the ball more. He has just seven targets since Week 9.

“We would like to, yeah,” coach Mike Vrabel said last week of getting Okonkwo more involved. “Trying to continue to find ways to get him the football.”

Even with a run-heavy offense, the Titans will need to be able to produce timely chunk plays through the air to find success in the playoffs.

Burks and Okonkwo, two rookies, are looking like players that can make that happen.

Other thoughts across the AFC South:

If you happened to catch the footwear during Sunday’s Colts-Eagles game, you may have noticed Rodney McLeod‘s unique cleats.

They were a tribute.

The Colts starting safety wore Virginia-inspired cleats to pay homage to victims of the UVA shooting earlier this month that left three football players dead and two others, including a fourth football player, injured. McLeod, a 2012 undrafted free agent, played his college ball at Virginia.

The left cleat, which is black, bore the last names and numbers of the players killed: Lavel Davis (No. 1), Devin Chandler (15) and D’Sean Perry (41). Inscribed on the right cleat, which is white, was a quote: “Those we love don’t go away, they walk beside us every day, unseen, unheard, still loved, but always near, still missed and very dear.”

Virginia canceled its last two games of the season in the wake of the shooting.

McLeod is one of two Colts players who played for the Cavaliers, the other being rookie tight end Jelani Woods, who hasn’t spoken publicly about the tragedy.

After the Eagles’ game-winning defensive stand, with his team holding on for the 17-16 comeback victory, Philadelphia coach Nick Sirianni went behind the bench to deliver an emphatic message to the fans: “That s–t was for Frank Reich!”

Sirianni, of course, was the Colts offensive coordinator from 2018-20. He considers Reich, who was fired by the Colts earlier this month, a dear friend and one of his biggest mentors.

And clearly, Reich’s firing rubbed him the wrong way. Reich’s days appeared to be numbered considering the offensive struggles to start the season, but the fact that he was reportedly fired over a phone call midseason has drawn criticism.

“You don’t want to know what I think if he should be here or not (coaching),” Sirianni said postgame. “You guys can probably imagine what I think.”

Regardless of how this Colts’ season started with Reich, it’s clear that he’s still beloved in the franchise. Team leaders have said it. In fact, during Jeff Saturday’s second press conference as interim coach, he acknowledged that the players still “love” Reich.

“That’s their coach,” Saturday said earlier this month. ‘They played for this dude. I don’t minimize that at all.”

A positive about the Texans‘ season? They have the draft to look forward to

Houston had just five net yards at half, the fewest net yards in a half in franchise history, according to The Associated Press. The Texans finished with a season-low 148 yards.

Star rookie running back Dameon Pierce, the cog of their offense, was limited to eight yards on 10 carries. Quarterback Davis Mills, who’s continued to prove that he’s not the long-term answer, threw two interceptions, including a pick-six on the team’s second play from scrimmage. A strong Commanders defensive front had nine quarterback hits on Mills, including five sacks. Everything about Houston’s offense was dreadful. 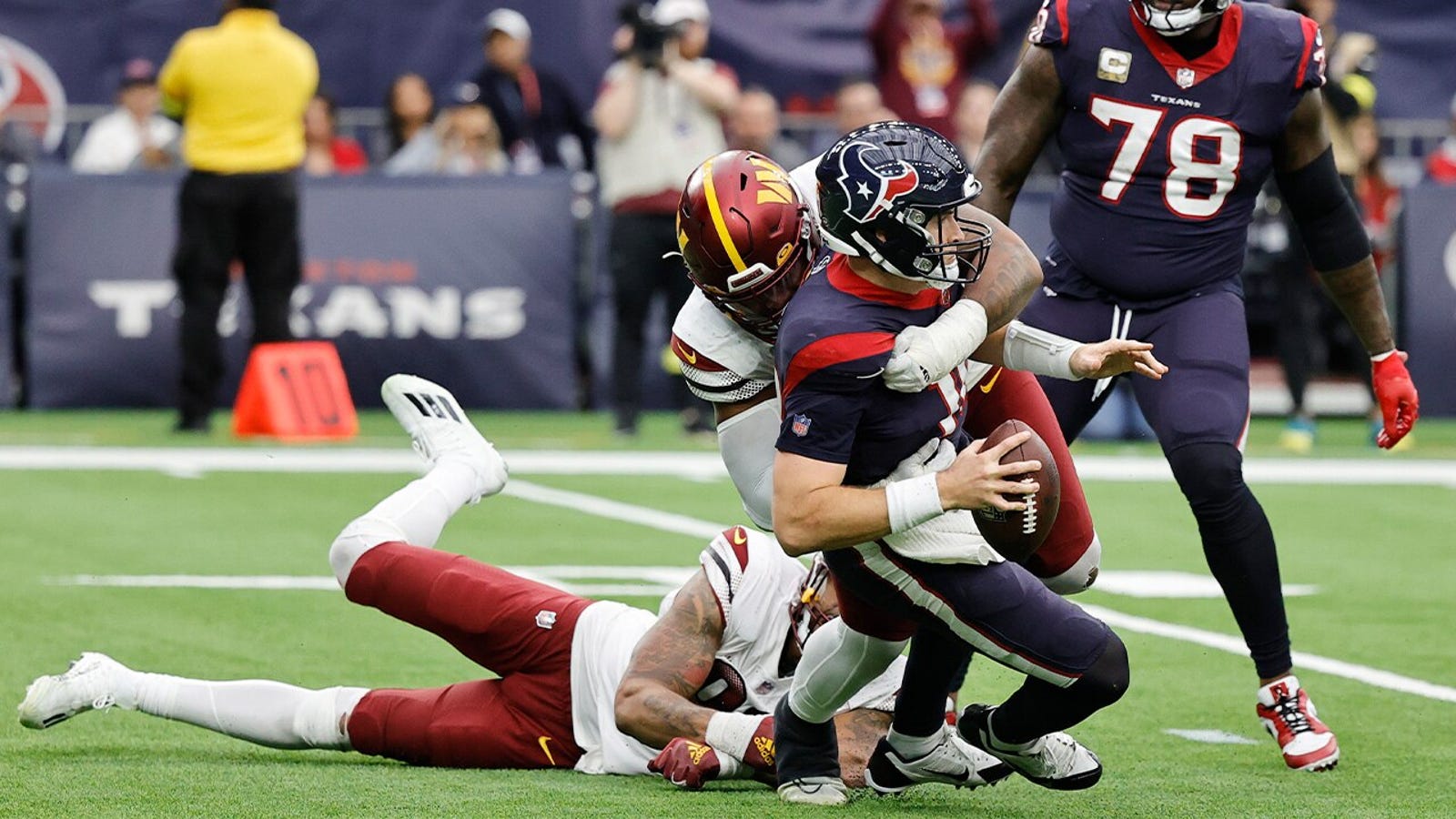 The Washington Commanders forced Davis Mills to two interceptions in the victory over the Houston Texans. The Texans were held to just 148 yards in the loss.

Despite their record, and struggles finishing, the Texans have actually been competitive through three quarters in a good chunk of their games. But Sunday, they were dominated start to finish, especially in the trenches.

Essentially, the Texans’ hopes of becoming one lie in crushing the 2023 draft, where the Texans will have two high first-round picks to change the franchise’s fortunes for the future. Houston is currently pegged to have the No. 1 and No. 8 overall picks. The Texans received the latter selection in the blockbuster trade that sent Deshaun Watson to the Browns.

Ben Arthur is the AFC South reporter for FOX Sports. He previously worked for The Tennessean/USA TODAY Network, where he was the Titans beat writer for a year and a half. He covered the Seattle Seahawks for SeattlePI.com for three seasons (2018-20) prior to moving to Tennessee. You can follow Ben on Twitter at @benyarthur.