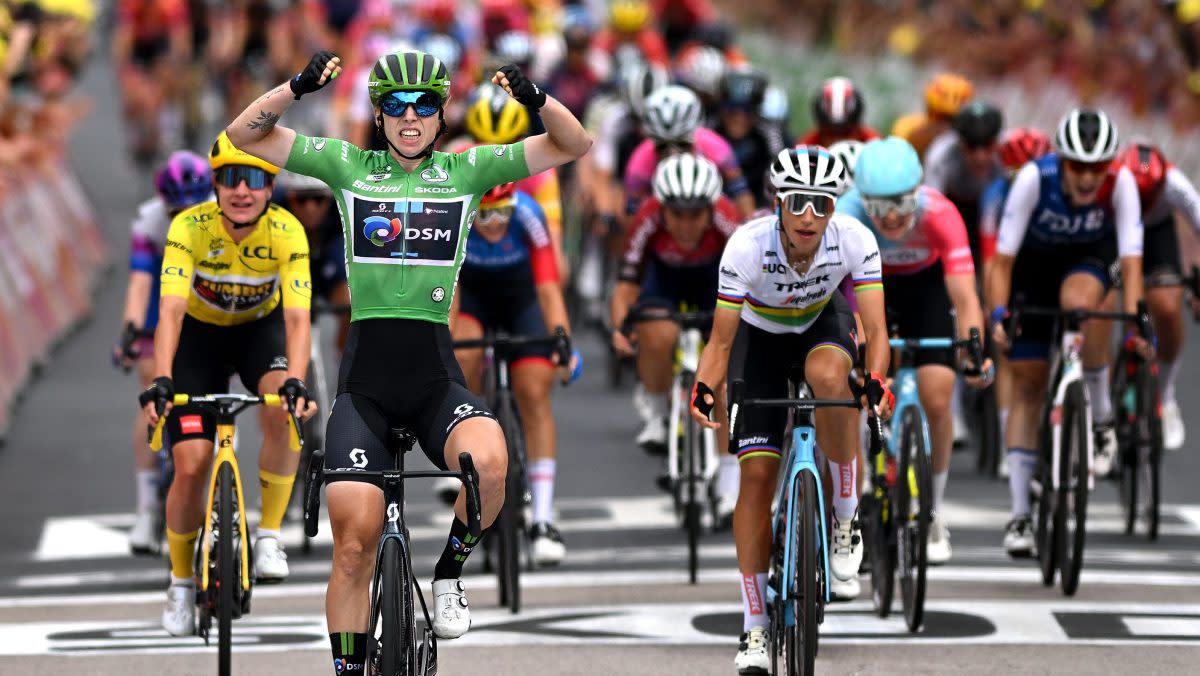 It is the Wiebes’ second stage victory of the 2022 Tour de France Femmes after she won Sunday’s inaugural stage. The 23-year-old currently ranks 53rd in the general classification standings, but second in the points ranking.

“I’m happy to deliver the sprints after a long stage, Wiebes said in her post-stage interview. “It’s still a goal to get the green jersey.”

Vos, meanwhile, remains in control of the yellow jersey with a 20-second gap over Italy’s Silvia Persico (Valcair – Travel & Service) and Poland’s Kasia Niewiadoma (Canyon // SRAM Racing). (A video highlight is embedded above.)

Thursday’s stage — a hilly 175-kilometer ride from Bar-le-Duc to Saint-Dié-des-Vosges — included plenty of chaos, including a massive, pile-up crash that took out half the peleton with 45 kilometers remaining. Most riders were able to continue, but Emma Norsgaard Bjerg was forced to abandon.

Victoire Berteau (Cofidis) attacked with just under 22 kilometers to go, with Antri Christoforou (Human Powered Health) going with her. It initially looked like the two cyclists might be able to maintain the breakaway til the finish, but the peloton managed to catch them with three kilometers remaining.

It was also a tough finish for two-time Olympic medalist Elisa Longo Borghini (Trek-Segafredo), who was leading with 500 meters remaining but took a wrong turn.

After the race, Ellen van Dijk joked about her Trek-Segafredo teammate’s mistake on Twitter, writing, “Smart move, @ElisaLongoB, this way you didn’t have to wait for the shower in the bus.”

Van Dijk went on to call out that “there should never be a gap like this in the last 500m without a guard.”

Pac-12 Storylines: Is Utah a CFP contender? How will Lincoln Riley perform in his first year at USC? | Number One Ranked Show

Should Manchester United target USMNT’s Weston McKennie from Juventus? | State of the Union