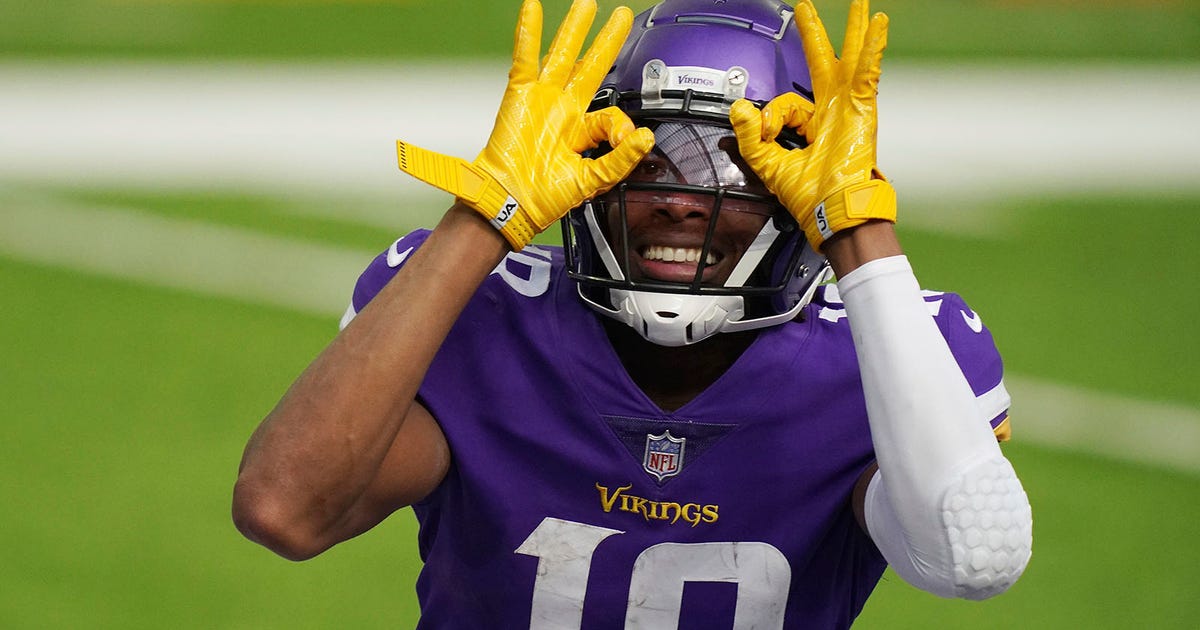 With the 22nd pick in the 2020 draft, the Minnesota Vikings select Justin Jefferson, wide receiver, LSU.

Commissioner Roger Goodell spoke those words from his basement April 23 during the first round of the virtual NFL draft.

That would go down as the best thing to happen to the Vikings in 2020.

The season did not go as planned — Minnesota lost five of its first six contests and finished 7-9, one game short of the postseason. But the Vikings did learn they’ve got a blossoming star on hand in Jefferson.

One of the big concerns in training camp was the lack of weapons around quarterback Kirk Cousins. Stefon Diggs departed for Buffalo in a trade, leaving Adam Thielen as the only proven NFL pass-catcher in the Vikings’ wide receiver room.

Second-year receiver Olabisi Johnson began the season as Minnesota’s WR2, as he primarily lined up outside and played 63% of the snaps in Week 1 and 78% against Indianapolis in Week 2. Meanwhile, Jefferson ran most of his routes from the slot and played 69% and 54% of the snaps in those games.

And then, the big revelation.

In Week 3 against Tennessee, Jefferson moved away from the slot receiver role and lined up opposite Thielen. He played 78% of the snaps vs. the Titans and caught seven passes for 175 yards and a touchdown. There was no looking back after that.

Jefferson ended up playing 886 of the Vikings’ 1,082 offensive snaps (81.89%), the second-most of any skill position player on the offense, only trailing the two-time Pro Bowl receiver Thielen (85.6%).

Jefferson shattered the NFL record books, breaking Anquan Boldin’s rookie record which stood for 16 seasons with 1,400 receiving yards on 88 receptions. Jefferson finished fourth in the NFL in receiving yards and tied with tight end Travis Kelce and receiver Calvin Ridley for the most receptions of 20+ yards (23).

Johnson ended up playing just 22.1% of the snaps, a lower clip than receiver Chad Beebe (29%).

Cornerback Jeff Gladney, who was selected by the Vikings nine picks after Jefferson at No. 31 overall, also saw a heavy workload. He was on the field for 958 of the Vikings’ 1,074 defensive snaps (89.2%), the most of any Minnesota cornerback.

Like Jefferson, he saw his role change throughout the year. Gladney began the season as a starter at outside cornerback, but after getting humbled against Indianapolis, the rookie moved to slot corner. There are always growing pains for young cornerbacks in head coach Mike Zimmer’s scheme, but Gladney gave the Vikings a bit of stability at the position in a tumultuous season for the secondary.

Other notes from 2020 snap counts:

— Three offensive players were on the field for 100% of the snaps this season — Cousins, guard Dakota Dozier and center Garrett Bradbury.

— Safety Anthony Harris was the only player to be on the field for all 1,074 defensive snaps.

— Tight end Tyler Conklin’s season snaps went up from 25.5% last season to 41.4% in 2020. Kyle Rudolph’s injury was a factor, but Conklin had a bigger role in the offense even when Rudolph was healthy.

— There were two one-snap wonders on the Vikings defense. Eden Prairie, Minn., native Ryan Connelly saw one snap at linebacker in Week 2. Safety Curtis Riley was on the field for one play against Detroit in Week 9.