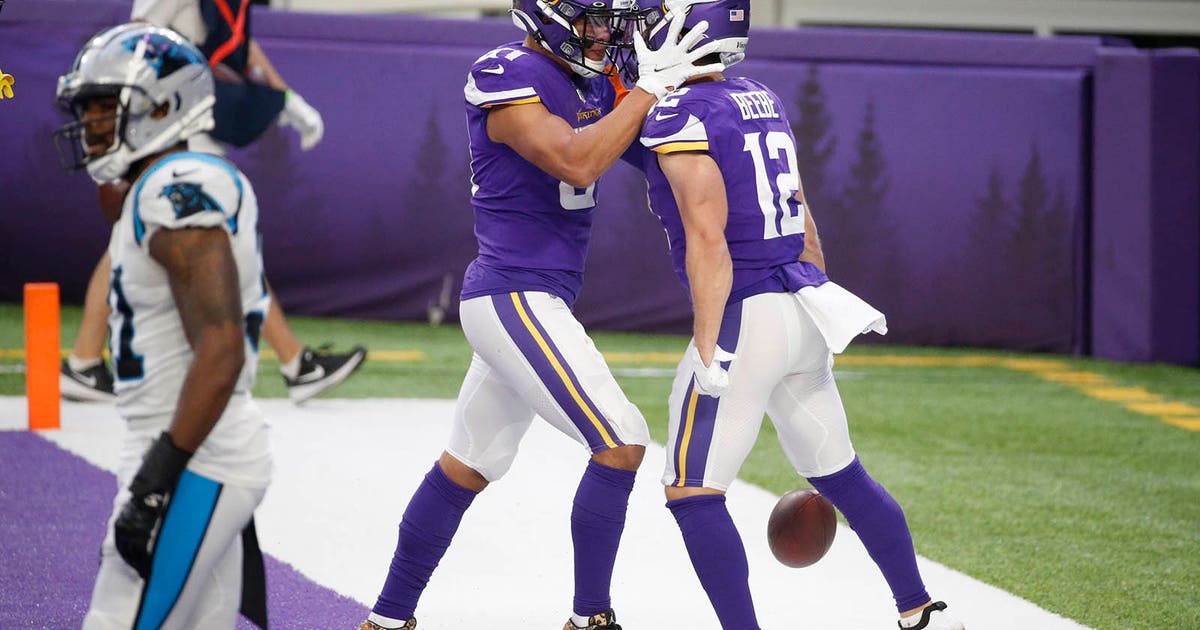 When wide receiver Adam Thielen was ruled out for Sunday’s clash between Minnesota and Carolina due to COVID-19, the script for the Vikings’ offense wrote itself.

It was projected to be another Dalvin Cook Game™, in which quarterback Kirk Cousins would manage the offense and calmly hand the ball off to the Vikings’ top playmaker.

Instead, the Vikings did the opposite.

Cook played just 63% of the snaps – his second-lowest clip of the season (not counting Week 5 when he exited with injury). He tallied 22 touches (18 carries, four catches), going down as his smallest role in the offense since Week 2.

Jefferson was seen on the field on all but one offensive snap (99%), leading all wide receivers. Johnson (79%), Beebe (48%) and Tajae Sharpe (10%) also lined up wide, the latter seeing the field for the first time since Week 2.

Jefferson did the most damage with 70 receiving yards and two touchdowns – his second career multi-score game – and Beebe, of course, redeemed himself from a costly muffed punt in the fourth quarter with the game-winning 10-yard touchdown grab with 46 seconds to play.

Rudolph set season bests with seven catches for 68 yards. It was his 12th career game with 7+ catches and his first since 2018.

— Linebackers Eric Wilson and Eric Kendricks both played 100% of the defensive snaps for the second straight week. The two combined for 21 tackles, two tackles for loss, one interception and one pass defensed. Wilson and Kendricks are the only linebackers in the NFL to have 3+ interceptions this season.

— Rookie Jeff Gladney (95%) led all Vikings cornerbacks in snaps for the fifth straight week. Cameron Dantzler (75%), Kris Boyd (58%), Chris Jones (35%) and Harrison Hand (5%) were the other four cornerbacks featured on the field. Hand played his first defensive snaps since Week 8.

— Anthony Harris played 100% of the snaps at safety while collecting 11 tackles, his second-highest single-game total.

— Backup running back Alexander Mattison saw 12 snaps on the field and rushed twice for six yards. He hadn’t played more than five snaps in the previous two games.