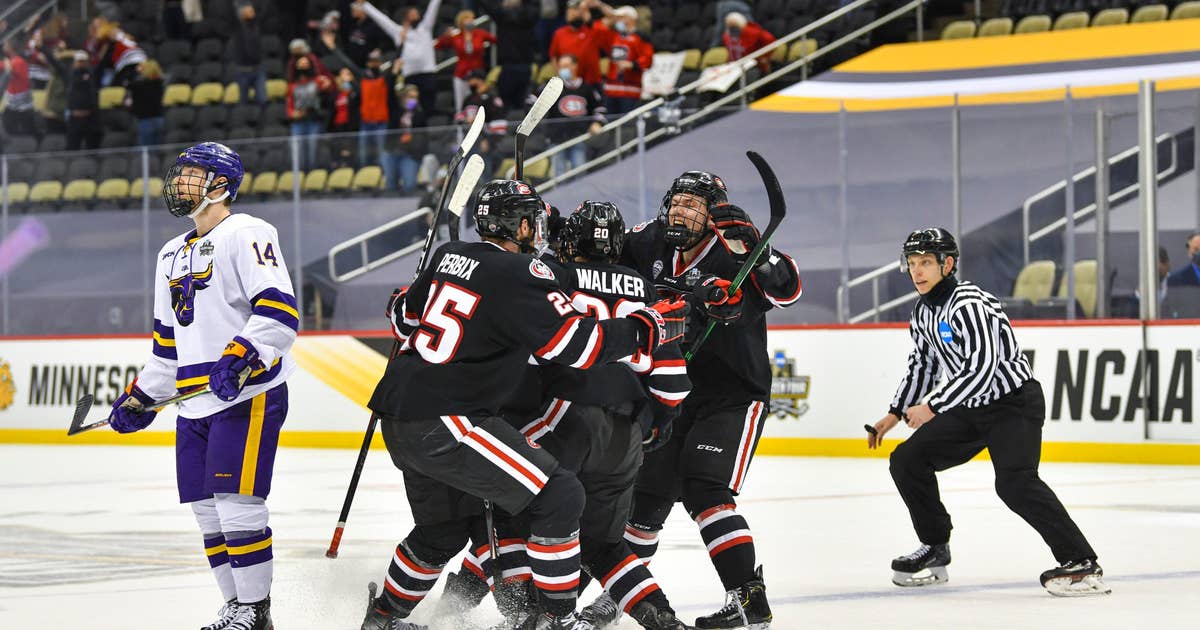 PITTSBURGH — Nolan Walker scored on a redirection with 53.2 seconds left and St. Cloud State held off Minnesota State 5-4 on Thursday night to advance to the program’s first national championship game.

“I was just really glad our guys didn’t get down, they stuck with it, they found a way to get a puck to the net,” St. Cloud State coach Brett Larson said. “Joe Molenaar coming up with a huge goal, just being inserted into the lineup, and obviously getting into the tough areas and tipping one in late.”

But Molenaar, a freshman, tied it at 4 with his first career goal midway through the third, and Walker got a stick on defenseman Seamus Donohue’s shot to win it.

David Hrenak made 25 saves for the Huskies, who were without their leading scorer Easton Brodzinski due to a season-ending injury in the East Regional.

St. Cloud State opened the scoring 3:18 into the game with a power-play goal by captain Spencer Meier. Ten seconds after Nathan Smith tied it at 1 on another power play, Kyler Kupka finished Walker’s individual effort by sending a shot into a gaping net to give the Huskies a 2-1 lead.

Will Hammer, a fourth-line center, made it 3-1 early in the second period by capitalizing on a turnover for an unassisted goal.

Duehr pulled Minnesota State within 3-2 midway through the second by sending in a rebound for his 10th goal of the season. Less than a minute later, Minnesota State had another power play and Smith tied it when he roofed a wrist shot for his fourth goal in three games.

T.J. Houshmandzadeh: Julian Edelman is not a Hall of Famer | THE HERD